Kim Davis claims to have met secretly with Pope Francis, who urged her to "stay strong"

The Vatican declined to comment, but Davis insists the pope "validated" her views on religious liberty 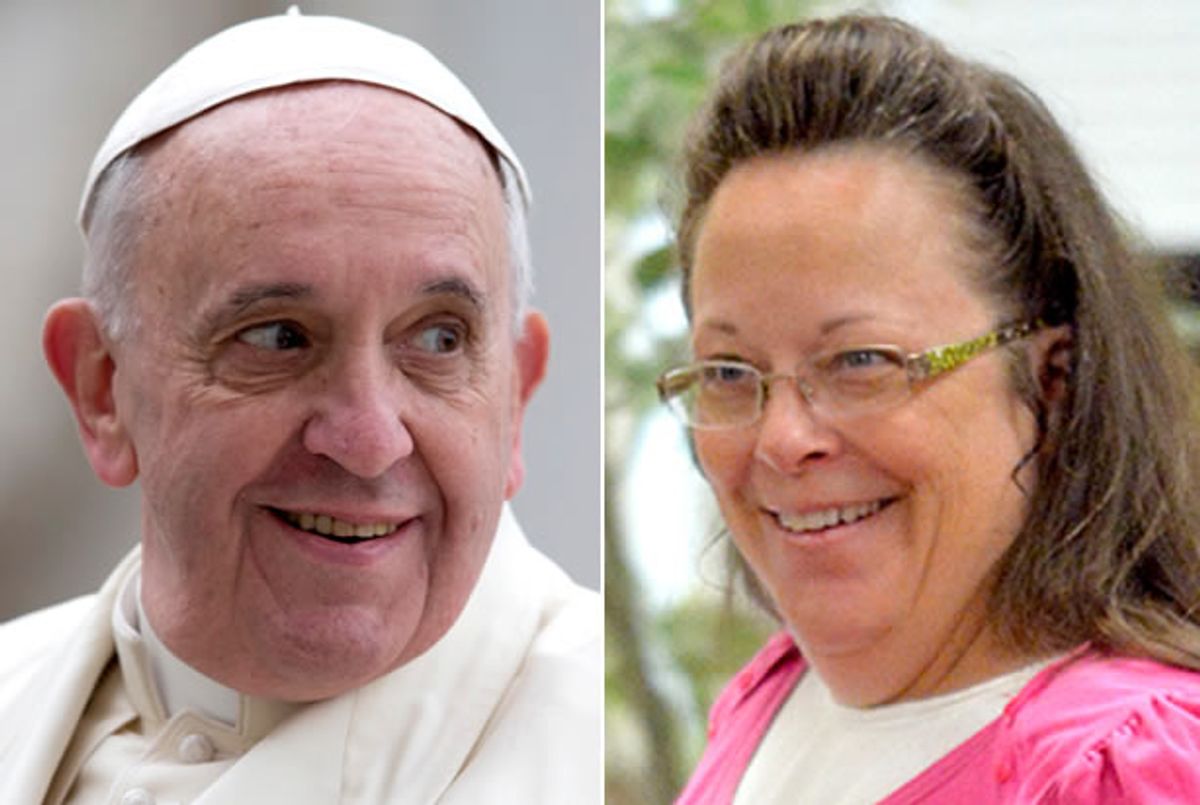 Kim Davis -- the Rowan County, Kentucky Clerk who became a conservative celebrity after refusing to issue same-sex marriage licenses -- told ABC News Wednesday morning that she had a covert meeting with Pope Francis during his recent visit to the United States in which he urged her to "keep up the fight" and "stay strong."

According to Davis, while in Washington D.C. being feted by conservatives for her bigotry, she received a call from Catholic officials indicating that the Pope wanted to meet her. "I'm just a nobody, so it was really humbling to think he would want to meet or know me," she said. The alleged meeting took place on September 24th.

Once there, "I put my hand out and he reached and he grabbed it, and I hugged him and he hugged me," Davis said. "And he said, 'thank you for your courage.'"

"He told me before he left, he said, ‘stay strong.’ That was a great encouragement. Just knowing that the pope is on track with what we're doing, it kind of validates everything to have someone of that stature,” she added.

Francis' remarks about Davis were the only real sour notes liberals heard during the papal visitation. ABC News' Terry Moran asked the pope if people should disobey the law in the name of religious liberty -- an obvious allusion to the Davis case -- and he replied that "I can't have in mind all the cases that can exist about conscientious objection, but, yes, I can say that conscientious objection is a right that is a part of every human right. It is a right. And if a person does not allow others to be a conscientious objector, he denies a right."

After Davis' lawyers with the Liberty Institute informed the public of the alleged meeting, the Vatican Press released a statement saying that "the Holy See is aware of the reports of Kim Davis meeting with the Holy Father. The Vatican does not confirm the meeting, nor does it deny the meeting. There will be no further information given."

UPDATE:: Vatican spokesman Rev. Federico Lombardi told the New York Times that "I do not deny that the meeting took place, but I have no other comments to add."