The dark art of boldly lying to America: Why Carly Fiorina is Dick Cheney's spiritual successor 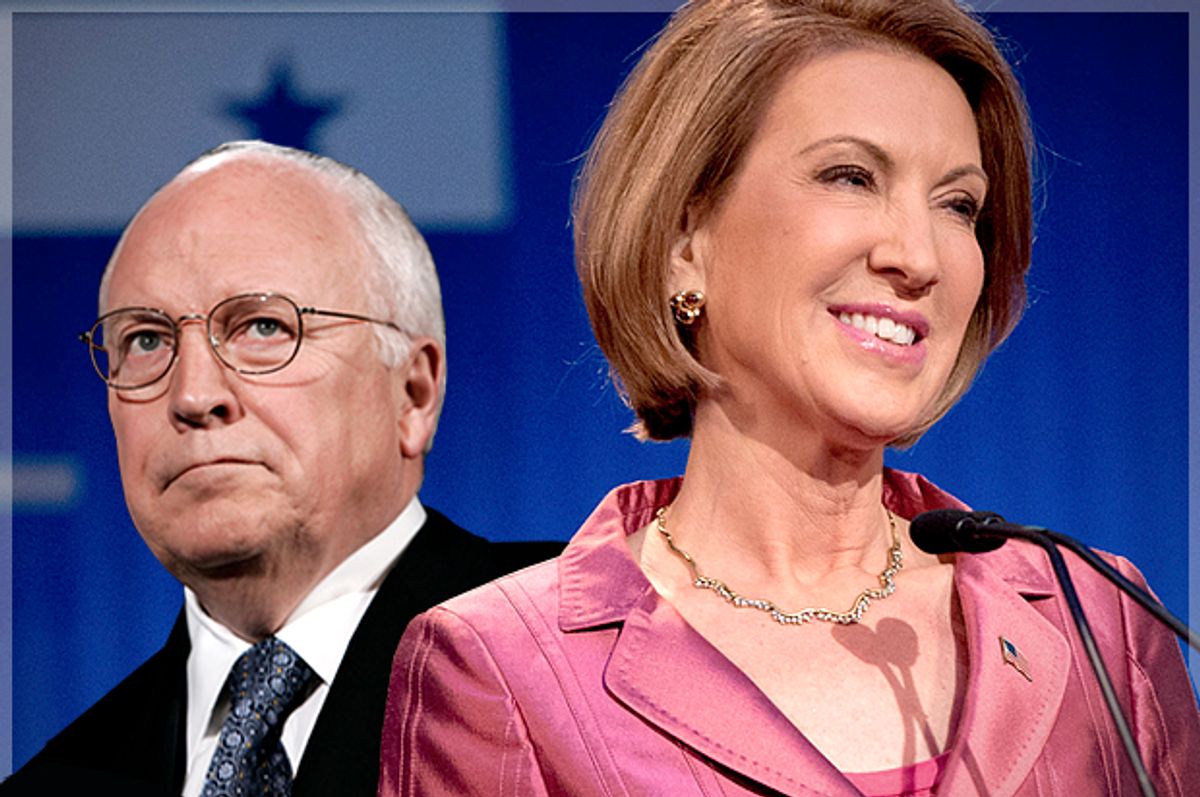 Judging from the amount of airtime and column inches devoted to the subject, most members of the press are deeply concerned with which dates Hillary Clinton actually started using a personal email server and whether or not what she considers a personal email is actually a personal email. One assumes that their obsession with such tedious minutiae is indicative of a well-founded suspicion that the candidate is engaged in a deception so outrageous that when it is fully revealed will show dishonesty and corruption on a level that will lead to criminal indictment, if not a trial for treason. So perhaps they simply don't have the time and resources to devote to covering Republican candidate Carly Fiorina's willingness to unrepentantly and repeatedly lie to their faces.

You'd think that after implying she rose to the top of Hewlett Packard from the bowels of the typing pool when she was actually a business school graduate who rose through their management training program, the press would have given Fiorina more than a side-eye. And after she boldly asserted that her time as CEO there was actually a success when by all meaningful measures it was an abject failure she would have been subject to daily cable news segments in which talking heads discuss her basic honesty and integrity. Certainly the thorough fact-checking by many news organizations proving her deceit (or delusion) about what she claimed in the Republican debate to have seen on those notorious Planned Parenthood videotapes (and the abject denial of reality when confronted with the truth last week-end on "Meet the Press") should have led to a frenzy of attention to her serious problems separating fact from fiction. But for the most part, the media seem to have moved on.

Still a few members the press do seem to be nonplussed by her behavior on the campaign trail. Dahlia Lithwick probably best expresses their bafflement in this piece at Slate:

The enormity of the fabrication surprised me; the fact that nobody had ever seen this extraordinary smoking gun before stunned me; the fact that not one of the journalists moderating the debate followed up on her claim surprised me. The fact that contemporaneous mainstream media reports of the debate—more theater criticism than journalism—failed to fact-check it surprised me. The people who did fact-check it all immediately agreed that it wasn’t true, and yet Fiorina’s word-picture was touted for days as the emotional zenith of the debate. This all surprised me: the notion that journalism and fact-finding are demonstrably unrelated enterprises.

That is surprising. As Lithwick writes later in the piece, "it’s truthiness elevated to almost cosmic levels.” But again, the press can't be everywhere and with the full court press on Clinton's vastly important email story it's understandable that they would be unable or unwilling to push Fiorina any further than they have. There are only so many hours in the day. Nonetheless Fiorina does merit some extra attention if only because it takes a very special kind of person to go on "Meet the Press" and look the directly into the camera and tell the country "you can believe me or you can believe your lying eyes".

Of course, she's not the first special person to do that, is she?  Indeed, lying to the press is so common that it's almost not worth mentioning.  But as Lithwick points out, there is something unusual about insisting that you are telling the truth when the facts clearly contradict you. You wonder where someone like Fiorina would get the idea that she could get away with such a thing until you remember that people far more powerful and important than she is have gotten away with much, much worse:

Recall Dick Cheney appearing in September of 2002 and saying this:

We do know, with absolute certainty, that he is using his procurement system to acquire the equipment he needs in order to enrich uranium to build a nuclear weapon."

"We believe [Saddam] has, in fact, reconstituted nuclear weapons."

In fact both of those claims were false. They did not know any such thing. In fact we learned they knew the opposite and rigged the intelligence to reflect these falsehoods. (This Frontline documentary called Cheney's Law is very informative on this subject.)

In the 2004 Vice Presidential debates he insisted that he had never suggested that Iraq and Al Qaeda were in cahoots in the 9/11 attacks, when he had done so on "Meet the Press" in December of 2001. And just last year, Cheney once again went on "Meet the Press" and lied. When asked about the Senate Torture Report which condemned the Bush administration's "enhanced interrogation" program, Cheney denied that what they did was torture and instead defined torture as "what the Al Qaeda terrorists did to 3,000 Americans."

He went on to defend the practice and blandly insist  the report's documented conclusions were simply not true.  And just to put a flourish on his prevarications, he reversed himself again and insisted that Iraq had a relationship with Al Qaeda, practically daring someone to challenge him on it. Nobody did, presumably because it's now impossible to keep track of which lies are which.

So, as you can see, Carly Fiorina has learned from the best. Just like Dick Cheney, she makes outrageously dishonest claims, refuses to admit it when she's caught and stubbornly barrels ahead confidently insisting that her claims are true even when presented with proof that they are not. Dick Cheney is still considered respectable, an elder statesman, and he's treated with respect among the political elite so why not her?

Indeed, the right actually appreciates this unwillingness to ever say you're sorry. It shows commitment to the cause. And just as they consider hypocrisy to be the price vice pays to virtue, they consider lying to be fine if they believe it reveals a larger truth. In Cheney's case, waterboarding may be torture and it may be illegal, but the larger truth is that they believe those people who were tortured deserved it. Fiorina may be lying about the videotape and even about the specifics of the Planned Parenthood practices, but the larger truth is that they believe abortion is immoral and anything that brings that home to people, true or not, is perfectly appropriate. The larger truth justifies the smaller lies.

In this piece about the conservative movement's "Long Con",  Rick Perlstein explains how lying helps someone like Fiorina take her place as a conservative star:

Lying is an initiation into the conservative elite. In this respect, as in so many others, it’s like multilayer marketing: the ones at the top reap the reward—and then they preen, pleased with themselves for mastering the game. Closing the sale, after all, is mainly a question of riding out the lie: showing that you have the skill and the stones to just brazen it out, and the savvy to ratchet up the stakes higher and higher. Sneering at, or ignoring, your earnest high-minded mandarin gatekeepers—“we’re not going to let our campaign be dictated by fact-checkers,” as one Romney aide put it—is another part of closing the deal.

Fiorina may have been a miserable failure as a CEO but nobody has ever denied that she was a hell of a saleswoman.

As if to prove that she is ready to join the Big Boys, earlier this week Fiorina  drew an explicit comparison to her mentor in the art of political deceit, telling Michael Isikoff of Yahoo News that the CIA "kept the country safe" by obtaining information that could not be otherwise obtained through a couple of instances of waterboarding, which she insisted were the only questionable interrogation techniques that were used. This is no more true when she says it than when Cheney does of course. (And unless Fiorina thinks such things as "rectal feeding" are normal interrogation techniques, waterboarding was not the only torture performed.) Without even a modicum of irony or self-awareness, she called the Senate Torture Report "disingenuous". But then so did Dick Cheney who more colorfully accused the report of being "full of crap."

Fiorina is often mentioned as a possible VP choice if this presidential campaign doesn't work out so it certainly makes sense that she would look to the most powerful Vice President in history for guidance as to how to deal with the press. If anyone knows how to get away with lying to their faces on issues big and small it's Dick Cheney who has demonstrated for years that there is no price