America is getting blindsided: How our imperial arrogance is continuing to wreak havoc

U.S. foreign policy continues to be guided by destructive notions about our own omnipotence 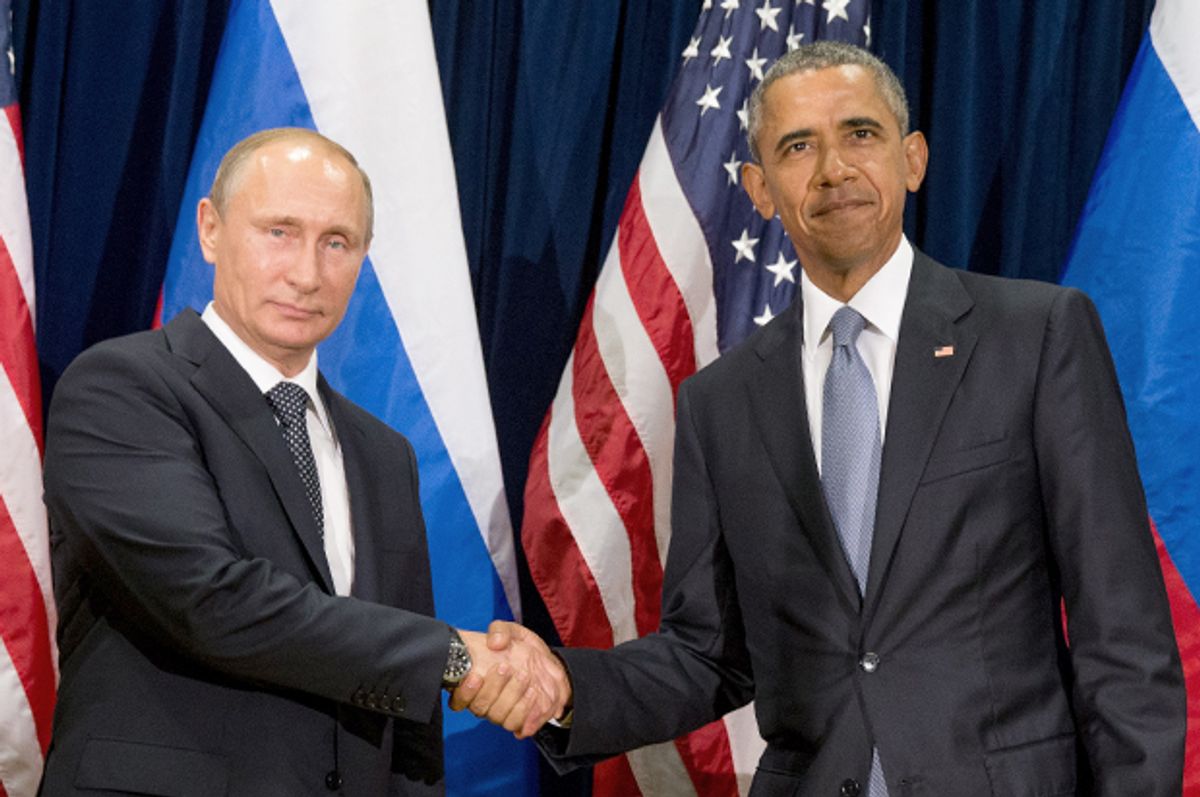 In the halcyon days of the Cold War, it was rare you saw a phrase like "White House surprised by Russians" in your morning paper. But recently taxpayers, who spend billions of dollars on our president’s situational awareness, learned he was surprised twice this week: first by Russia’s muscular advance into Syria and then by President Putin’s success at getting Iran, Iraq and the Syria to share intelligence with Russia on fighting ISIS.

How can this be? The brain trust that advises President Obama didn’t see the Putin gambit coming. As a consequence, President Obama had to take the world stage at the UN General Assembly armed only with grimaces and lame excuses for a failed U.S. counter-terror policy that has proliferated terror, left a trail of failed nation states behind and helped prompt the biggest refugee migration since World War II.

No doubt the Russians and Iranians have been up to their own destabilizing antics in the region, but for them the proximity of the ISIS dead zone is a lot closer than it is to us, less than the distance between Washington DC and Mexico City.  There’s a conflagration in their neighborhood and the US does not seem able to do anything about it other than waste money, continue bombing and avoid putting boots on the ground.

And even bullies can tell the truth. So when Russian President Putin raised the example of the miserable status of places like Libya, where the U.S. and  NATO  took out Muammar Gaddafi in 2011, only to see the once-stable nation descend into a chaotic terrorist haven, President Obama had a poor rhetorical hand to play. “Even as we helped the Libyan people bring an end to the reign of a tyrant, our coalition could have and should have done more to fill a vacuum left behind,” explained President Obama. Let’s just call this the "Could've, Should've" foreign policy doctrine and put a bow on it -- just make sure to watch it unfold from a safe distance.

Post-9/11, the U.S. has displayed a stunning blend of arrogance and ignorance of the facts on the ground in the places we are blowing up. Our policy makers have been able to entirely divorce themselves from the consequences of their cascading failures. This is what happens when your intelligence and domestic media feedback loops are corrupted by flattery and opportunists who want to please the boss at any cost and curry favor to maintain access.

As reported by NPR and the New York Times, our president may have been fed military intelligence that was skewed to stroke him with a false sense that things were going better than they actually were for the U.S. in its bombing and drone campaign against ISIS that started back in August of 2014. The DoD brass are no fools and they knew that President Obama was in pre-legacy  mode, which meant he wanted to be able to claim he had largely ended the need for U.S. military presence in Iraq and Afghanistan, all reality to the contrary.

This is the same chief executive who back in January 2014 dismissed ISIS as a “JV” team. Just four days before Obama offered that off-the-cuff assessment ISIS had taken Fallujah. That’s the city where just a decade earlier a prolonged American siege left most of the buildings damaged and drove half of the residents from their homes. We need to destroy these places to save them.

By June of 2014, the Wall Street Journal  was reporting that America's “top policy makers and military leaders” were “caught off guard” by the swift collapse of Iraqi security forces who “largely abandoned their posts” as ISIS took Mosul and Tikrit.

No doubt messy facts on the ground about a rising threat that the U.S. was failing to stop just didn’t fit in that picture, so we just cropped it out. Yet, even then, off our media’s radar, the thousands of war weary refugees from our free fire zones were voting with their feet and heading west for Berlin. Now we know that ISIS has recruited 30,000 fighters since 2011 from more than a 100 countries. In the same news cycle, it was  reported our $500 million dollar program to train moderate Syrian fighters was a very expensive bust.

While things were falling apart in Iraq and Syria at an accelerated pace through 2014, the United Nations reported there was a 20 percent spike in civilian casualties in Afghanistan. But that didn’t stop the president in early 2015 from rolling out a new national security plan that sounded an all clear, proclaiming a new pivot homeward, now that we finished up our work bringing order to the mideast.

“Globally, we have moved beyond the large ground wars in Iraq and Afghanistan that defined so much of American foreign policy over the past decade. Compared to the nearly 180,000 troops we had in Iraq and Afghanistan when I took office we now have fewer than 15,000 deployed in those countries,” the President wrote. “We possess a military whose might, technology and geostrategic reach is unrivaled in human history.”

This presidential bubble is reality-proof.

A few weeks after the release of the White House’s upbeat global assessment, Susan Rice, Obama’s national security advisor was telling an audience at the Brookings Institute that there was too much “alarmism” about the flare-up of multiple global hotspots, noting the U.S. was not facing the “existential threats” of a Nazi Germany or Soviet Union.

Around the same time, John Sopko, the Special Inspector General for Afghanistan was seeing a pretty significant decline in the force strength of both the Afghan National Army and police. What SIGAR analysts documented was that 40,000 Afghan National Army soldiers had left the military from September 2013 through September 2014 and there was an 11 percent decline in troop strength due to desertion, discharges and deaths from January through November of last year.

“The latest inconsistency in ANSF strength reporting is particularly worrisome, coming as it does when the ANSF has taken full responsibility for Afghanistan’s security,” wrote SIGAR analysts. “This is especially important since US taxpayers have paid $20 billion to cover salaries and other sustained costs,” SIGAR concluded. And yet  it was far from a new issue considering it was flagged as early as a 2010 audit.

Back in March of this year at a House Armed Services  hearing, Congresswoman Tammy Duckworth, a disabled veteran who lost both legs in Iraq in 2004, asked General John Campbell, commander of U.S. forces in Afghanistan, to account for the massive quarterly fluctuations of Afghan troop and police force strength.

“When we are cutting our funding for U.S. forces here in  the U.S. and looking at everything from shutting down commissaries on bases, to adjusting retirement benefits for our armed forces, we are looking at future expenditures in Afghanistan,” said Duckworth. “I have concerns that we have sufficient oversight for how the Afghans are spending the money. Specifically, you had mentioned  their lack of self-sustaining capability. Are we paying for ghost soldiers?”

Campbell never answered Duckworth's question directly, but he went on to say that actual Afghan force readiness data had to remain classified, just as U.S. troop readiness data remains top secret, for security concerns. Campbell did complain that he did not have the sufficient staffing to handle “60 plus audit” like the ones undertaken by SIGAR.

Meanwhile, it's hard to overstate the amount of dysfunction in Afghanistan, where U.S. troops are evidently set to hang around a little while longer. Consider the report from SIGAR just a few weeks back that flagged “a potential critical shortage of cold weather clothing for the Afghan National  Defense and Security Forces” this coming winter.  “We recently learned that there have been shortages of cold weather clothing for the ANDSF since 2011,” wrote IG Sopko to Defense Secretary Ashton Carter.  “Coalition advisors determined in 2013 and 2014  that clothing shortages and developed across the ANDSF.”

Hmmm... could being cold inspire desertion?

The truth is too awful to contemplate but we ignore it at our peril. While Afghan troops scramble for winter wear, in a theater of war where so many have already died and billions already wasted, civilians flinch as they hear incoming missiles  like the ones that incinerated a Yemeni wedding party that left 130 dead last week.

Meanwhile, as temperatures drop in Europe, the wave of incoming refugees keeps coming.