What would Eleanor do?: The refugee crisis unfolding in Europe today brings to mind Mrs. Roosevelt's dilemma 75 years ago

Eleanor Roosevelt's lifelong regret was not admitting more refugees before WWII. Is the US repeating the past? 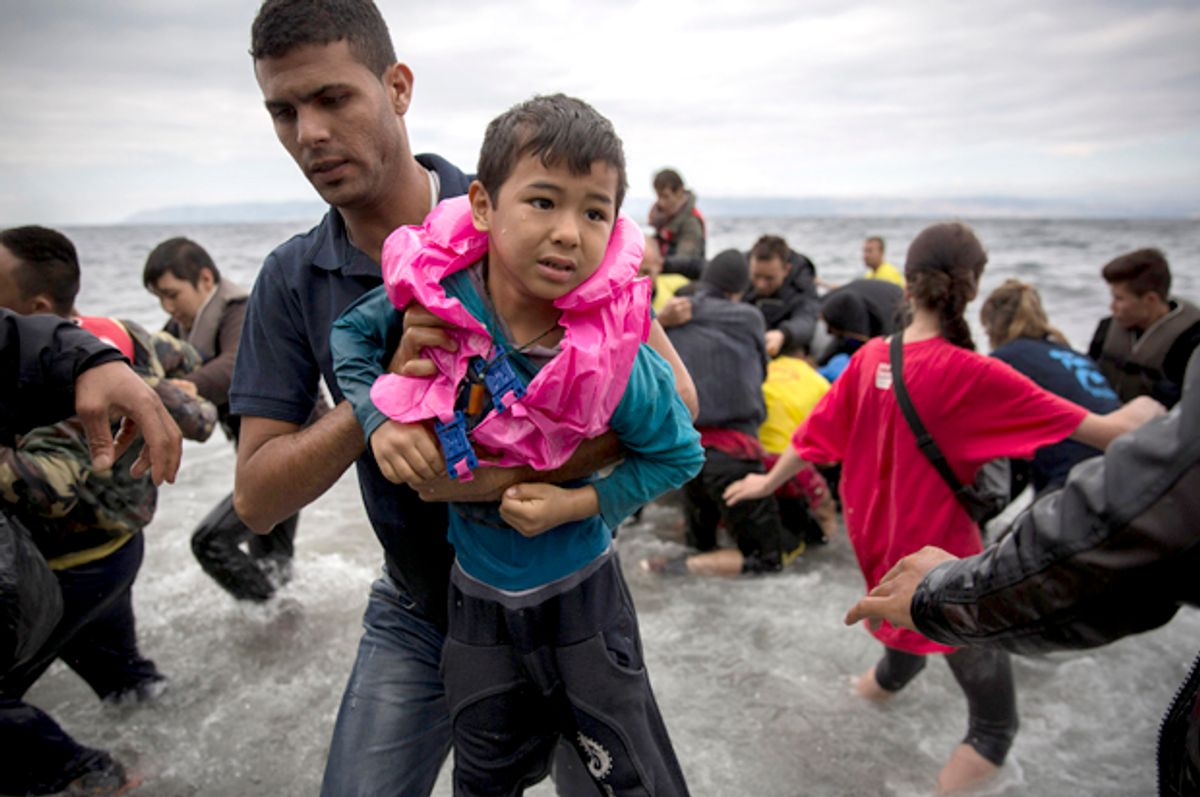 Eleanor Roosevelt’s son James told historian Doris Kearns Goodwin that the greatest regret of his mother’s life was her failure to convince her husband to admit more European refugees to the United States before World War II. Her lament is a warning to all of us.

We are currently watching a refugee crisis unfold with ghostly similarities to what Eleanor lived through over 75 years ago. For the past four years, I’ve been immersed in researching and writing a novel set in pre-war New York in which Eleanor Roosevelt is a major character. How strange to look up from my manuscript to hear of Middle Eastern and African refugees making their own harrowing journeys.

In 1938 Hitler was marauding across Europe, uprooting people from their homelands and forcing them out into a world where no other countries were willing to accept them. Countries like Austria, Denmark, Poland and France refused to grant them asylum – neither did the United States.

At that time xenophobes such as Charles Lindbergh and Joseph Kennedy – along with their isolationist America First Committee – claimed that, given our own pressing domestic concerns, it wasn’t the U.S.’s responsibility to get involved in the “European War.” “If we help them they will take our jobs,” they argued. “If we help them we will go broke.”

These nationalists falsely asserted that the majority of the refugees were actually disguised German spies seeking American military secrets. Their rhetoric convinced most of the public. And it convinced President Roosevelt. Boatloads of European refugees were refused entrance into the U.S. – the SS St. Louis being the most famous and tragic – and sent back to Europe. Restrictive quotas were enacted and even those with valid visas were denied entry.

But Eleanor looked at the other side of the equation: What will happen if we don’t help them? She understood that these were human beings whose lives were being upended – and often ended – by the whims of a megalomaniac with a massive war machine behind him. That these people suddenly had no home, no country, nowhere to go. That they would most likely die if no one reached out a hand.

She pleaded with her husband, beseeched him to look beyond what appeared politically impossible and recognize what was humanly possible. But Franklin didn’t listen, mostly likely because there was a presidential election looming. He turned his back on those who needed help, instead playing to his largely isolationist audience – at that time almost 80 percent of Americans were against military involvement in Europe and many believed that accepting refugees might draw us into the conflict. He won the election.

The president again turned his back when, dismissing Eleanor’s entreaties, he promoted Breckinridge Long, an ardent anti-Semitic isolationist, to a position in which he had full control over the issuance of visas. We now know that Long kept almost 200,000 congressionally authorized visas out of the hands of needy refugees – almost all of them Jewish. These visas went unused, while the people for whom they were approved were either unable to leave Europe or were sent back there. We all know what happened next.

Unfortunately, the parallels between then and now are clear. Most of the Middle Eastern and African refugees of today are running from conflicts rife with violence, destruction, persecution and genocide. Their homes and their business and their cities have been destroyed, and the militias ruling the streets often kill and rape those left behind. So they take what little they can carry, clutch their children to their chests, and leave. Not because they want to. But because they have no choice.

The similarities are just as profound on the receiving end – or perhaps, more fittingly, the non-receiving end. As these families brave hazardous and sometimes deadly journeys to reach Europe, many of the countries in the EU have refused to let them in, sending armed guards to borders, building fences, constructing restrictive polices and bewildering bureaucratic labyrinths to keep the so-called economic migrants out.

In 1951, after the true horrors of the Holocaust had been revealed, an international convention agreed that any refugee – defined as someone who had left his country due to fear of persecution and was unable to “avail himself of the protection of said country” – was to be granted political asylum in any country to which he petitioned. This is now established international law. But, with the notable and ironic exception of Germany, this law is flagrantly ignored.

Forced displacement due to war and expulsion due to ethnic or religious persecution are nothing new. Indeed, they are apparently as old as our species. Over and over again, we fail to heed the lessons of history and find excuses to disregard our humanity.

As she looked back on her long and illustrious life, Eleanor Roosevelt’s deepest regret was for something she had not done, something it was temporally impossible for her to change. But there are things we can do. Things we can change. The United States’ offer to take in 10,000 refugees is commendable. But, given our size, our wealth – and hopefully our hearts – it’s not nearly enough.

“Give me your tired, your poor,
Your huddled masses yearning to breathe free,
The wretched refuse of your teeming shore.
Send these, the homeless, tempest-tost to me,
I lift my lamp beside the golden door!"

Or maybe we should just deport Lady Liberty back to France. She wasn’t born here after all.

B.A. Shapiro is the author of the award-winning New York Times bestseller "The Art Forger." Her new book, "The Muralist," will be released Nov. 3 by Algonquin Books. She has taught sociology at Tufts University and creative writing at Northeastern University. She lives in Boston with her husband, Dan, and their dog, Sagan.