Def Leppard's Phil Collen: We had more in common with Duran Duran than Iron Maiden

The iconic guitarist talks musical influences, the band's forthcoming album and their place in rock history 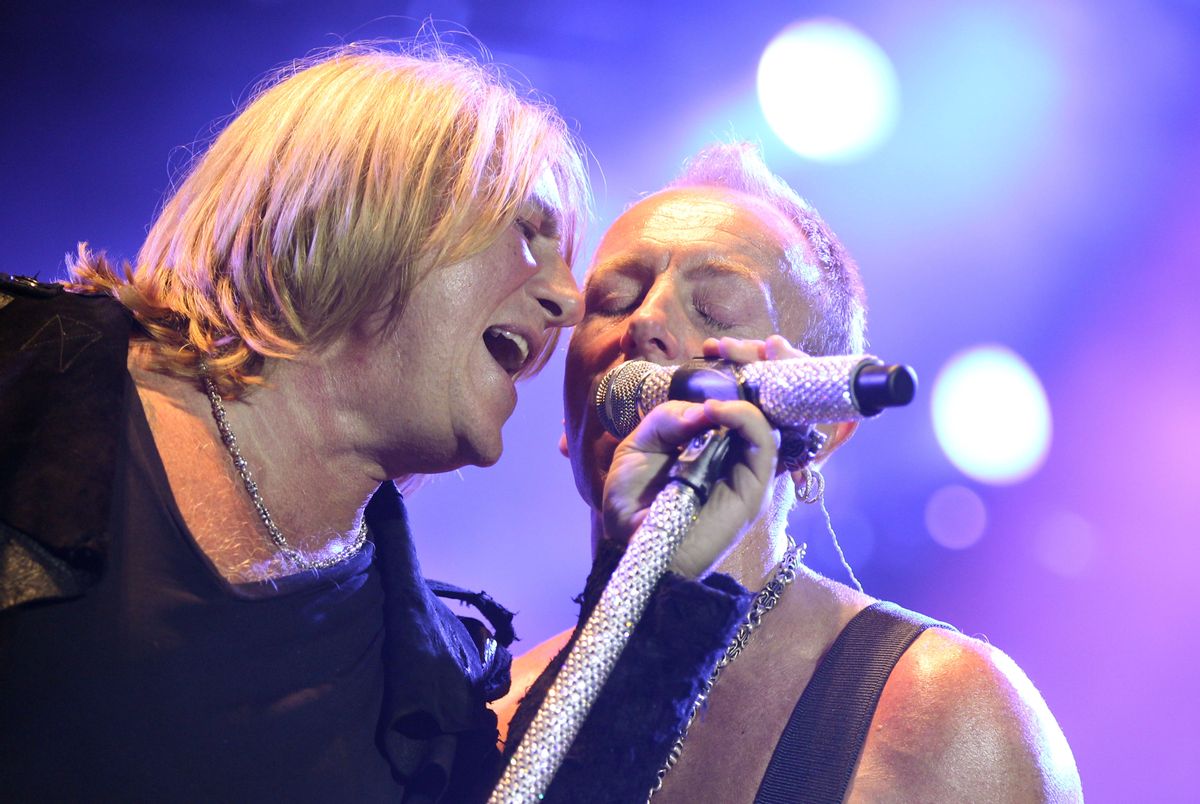 They started in their teens and served up one of the greatest 1, 2, 3 punches in music history – the seminal crunch of 1981’s High N’ Dry, followed by the razor-sharp arena rock of Pyromania in ’83, to their genre-smashing, 12x platinum, multi-layered masterpiece, 1987’s Hysteria. To date, Def Leppard have sold over 100 million records worldwide, and acts as diverse as Slayer, Metallica, Taylor Swift, and Tim McGraw cite them as a major influence.

What’s it like to ride that wave? Founding guitarist, vegan kickboxer, and one of the nicest guys in rock, Phil Collen, gets it all down in his new memoir, Adrenalized: Life, Def Leppard, and Beyond. We caught up with him to talk about the book and the band’s forthcoming album – their 11th – the self-titled Def Leppard.

So what’s the key to playing guitar with your shirt off at age 57 & still looking great?

It’s a really easy fix but no one’s prepared to do it, y’know? Eating right and not drinking alcohol. Or if you are drinking, not much of it. And being a bit active. Honestly, it’s that simple. It amazes me no one will do that!

When I was lifting heavy I would have a vegan protein powder, and I still do occasionally but I try to balance it out. I’ve always done a lot of martial arts and I take a kick bag on tour and do a lot of drills so that keeps me loose and supple and basically young. That’s the fountain of youth part. I actually screwed my back up a few months ago and I could only do two things that didn’t hurt — push-ups and pull-ups on a bar. So that’s all I did with some really light crunches. I’ve been doing this a lot of years so I’ve been able to figure out what works and what does not. You can get away with a lot less, just by tweaking it here and there.

You mention working with legendary kickboxer Benny “The Jet” Urquidez. Have you ever sparred with Duff McKagan?

I haven’t! I trained with Benny in the late 90s and I believe Duff still trains with him now. Duff and I have spoken about it since we have such fond memories of Sensei Benny.

A revelation from Adrenalized – you’re still not an official member of Def Leppard.

Right! (laughs) I think they did sneak me in there somewhere though.

Why did you decide to write a memoir now?

I didn’t, actually. I was at the Gerson Institute for a fund raiser and a friend of mine, Chris Epting, who’s my co-writer, suggested I write a book. I don’t really like the idea, as it seems egotistical but Chris convinced me we could do it in a different sort of way.

This was my takeaway on the secret of Def Leppard’s success: You were frugal, loyal and never forgot your working class roots.

I’d say you hit it bang-on the head. That’s it in a nutshell. It’s like fitness in that it’s not rocket science, but few are willing to do it. Our parents grew up in war-torn England with the Blitz going off trying to kill them and buildings blowing up here and there and they took that value system and instilled it into us. I think the further you get away from that sort of suffering and hard work, the less respect and honor people have in their everyday lives. All the guys in Def Leppard had that same working class background and it was based on those values. Even down to things like not wasting water, because there were rations.

I loved the part where you’re on the biggest tour in the world but you still refuse limos.

Absolutely! But then again, we were also surrounded by really cool people. At first we said, “Limos are great!” Then Peter Mensch, our former manager, would say “Guys, let me break it down for you…”

So we were fortunate that we had people who would nurture us and explain those things. A lot of bands don’t know or simply don’t care. Even with our management, it was very much a team and a family. And it still is to this day.

My wife and I watched the In the Round DVD recently. How were multi-tracked masterpieces likePyromania and Hysteriarecreated so faithfully? I heard you didn’t use tracks.

Ah, In the Round! No [recorded] backing vocals, no tracks. Every member of this band is a bad-ass singer and we thought it was a cop out out to rely on tracks.

You guys are working double up, every song on that show. Rick Savage is singing harmony, playing bass, guitar, keyboards, samples….

Here’s a fun story for you. When we recorded “Love Bites” we were never in the same room at the same time. We all sang on it but most of the backing vocals were Mutt Lange, he’s the one you hear more than anyone else and Mutt’s an amazing singer.

So we release the album and “Love Bites” goes to Number One. We’d never played it! It was so hard to work out how to play guitar and sing those parts at the same time. We had to come up with hybrid parts because before, where there had been eight guitar parts — you had to choose the most prominent ones and make a collage of sorts. Same thing with the vocals. I remember we had two days off but instead of taking the downtime we actually went into a studio just to practice that song and try to work it out. Again, it goes back to that thing: you want to be proud of your work. We were and we are.

After In the Round, we watched Duran Duran’s Arena. I always thought you two were similar: because you were considered teen idols, no one realized what incredibly adept musicians both bands were. So it was very interesting that there was talk of a Duran Duran / Def Leppard supergroup.

That was when I used to drink so it was one drunken night in Tokyo, but absolutely I do think we had a lot more in common with Duran Duran than a lot of the other rock groups. I think that’s the thing, being open to different styles of music. When people ask me what Def Leppard sounds like I say, imagine a rock version of Earth, Wind & Fire with all their melodies and grooves. So yeah, I’d say we had more in common with them than say, Iron Maiden.

Iron Maiden’s Adrian Smith was nearly the guitarist in Def Leppard. What would that have been like?

Well, he’s coming into our house so it’s still gonna be the Def Leppard sound. When Vivian Campbell joined, a lot of people asked how he would change our style. What Viv brought was some really killer vocals. I think that’s more noticeable than the guitars.

Adrenalized calls you a blend of Ritchie Blackmore and Al DiMeola. You don’t hear Al’s name much these days. I thought that was really cool.

A lovely compliment, huh? I started playing guitar because of Ritchie and I used to sit for hours trying to figure out Al DiMeola licks, but more trying to get his vibe than anything else. I love blending styles. I don’t think we should be put in genre boxes. I don’t do it in life so I don’t want to do it in music.

Speaking of that, what would Slang have sounded like with Steve Clark?

Steve was a very creative guy. He was a thinker, very much outside of the box. Mutt used to say, “Give me the thinker over the player any day.” Steve would come with the quirkiest, most left field ideas . . . yeah, you never know? I love the way Slang came out. There were mistakes we made. We probably should’ve spent a little more time on the songwriting. Not on the production, just some tweaks here and there.

I was talking with Eddie Trunk recently and we got on the subject of Def Leppard teaming with Mutt Lange again. Eddie’s opinion was that you guys probably didn’t want to go through that rigorous of a recording process in this day and age. But you did some tracks with Mutt recently, right?

About two years ago, yeah, but they haven’t come out yet. Mutt is even more talented now than he was back when we were all working together. The guy is just amazing. Hopefully those songs we did will come out soon. I think Def Leppard could work together with Mutt again. Maybe a song or something. Mutt brings out things in you that you didn’t even know were there. Totally inspiring.

This is fan fantasy but what about working with Mutt on something more immediate and raw likeHigh N’ Dry? Maybe even get Pete Willis somewhere in the mix? That could be pretty cool.

Well, Def Leppard is Def Leppard now. You’d  want to be careful bringing in someone else in and Pete’s quite a bit out of the loop now. Viv and I have our own chemistry. We’ve been playing together 23 years!

Unless . . . like we’ve got this one song on the new album called “Sea of Love” where Debbie Blackwell-Cook —  who sings in Delta Deep with me — has a guest appearance doing this really amazing high vocal with Joe. If it works, y’know?

I’ve been listening to “Let’s Go” this week. What can you tell us about the new LP?

For the first time ever in our career we don’t have a record company or anyone to please but ourselves. Let’s make a record for us. Initially we went in to just make a single but the ideas started flying and we really felt we had something to say. We didn’t even know we were making an album. It was shocking to us. One song sounds Top 40, another sounds like the Sex Pistols and then another very classic Def Leppard. I think it’s the best thing since Hysteria.

29th of October, I do believe.

Thanks, Jamie! We’ll see you soon.