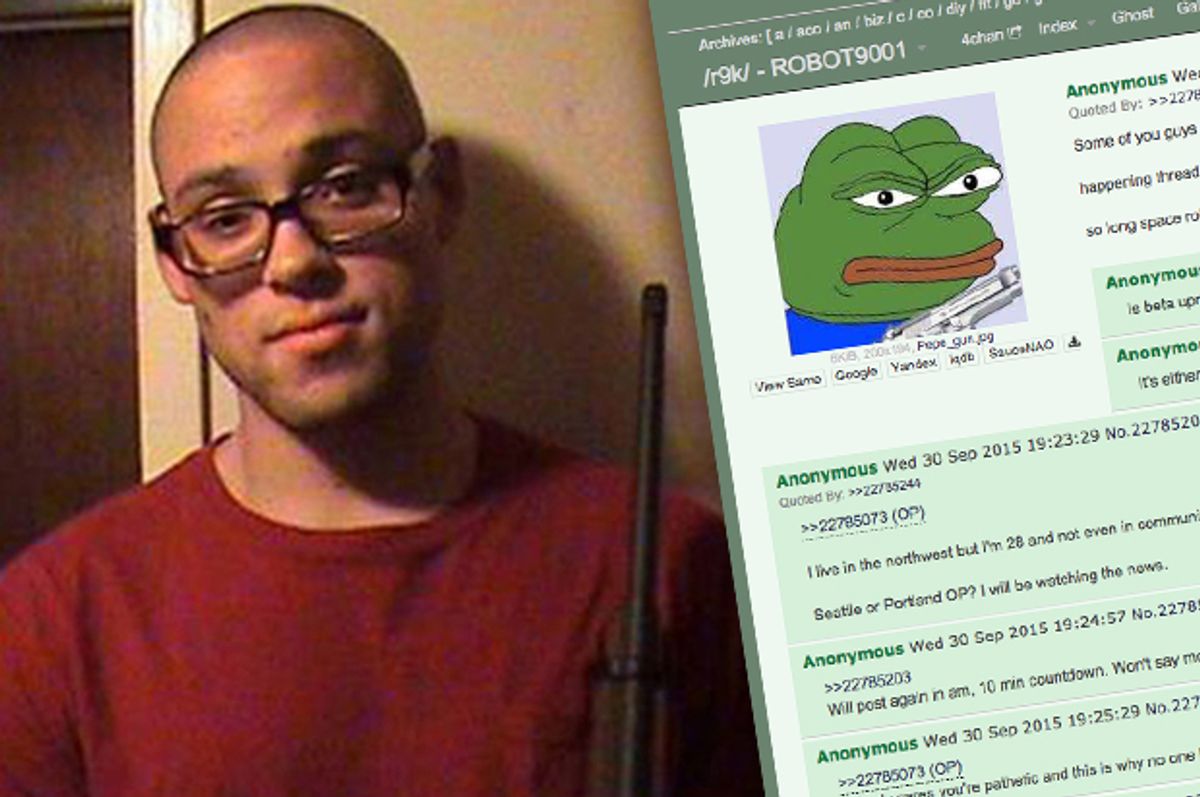 "The first of our kind has struck fear into the hearts of America. His cries have been heard, even by the president," the warning on 4chan read. It continued, "This is only the beginning. The Beta Rebellion has begun. Soon, more of our brothers will take up arms to become martyrs in this revolution. On October fifth, at 1pm Central time, a fellow robot will take up arms at a university near Philadelphia. His cries will be heard, his victims will cover in fear, and the strength of the Union will decay a little more."

In light of the deadly mass shooting last week at Oregon’s Umpqua Community College, the message was a particularly chilling one. But what made it all the more ominous was the similarity it bore to a 4chan message that appeared shortly before the Umpqua rampage, one that warned, "Don’t go to school tomorrow if you are in the northwest."

After this newer message, the FBI Philadelphia Field Office issued a weekend statement saying that "out of an abundance of caution," it had notified local colleges and universities of the warning, and that "We encourage students, faculty, and employees at area colleges and universities to follow the guidance of their campus security officials. The FBI will continue to work with our federal, state, and local law enforcement partners to investigate threats of violence, and, as always, we ask the public to report suspicious activity to law enforcement."

Temple University has said that "law enforcement is not aware of any specific threat at this time and they will have increased visibility on campus Monday." Drexel and the University of Pennsylvania issued similar statements.

After all, that's what I heard last week after I wrote about the /r9k board with the original anonymous threat that may have been linked to Mercer. I had people on social media helpfully explain to me that "Worship of Elliot Roger is ironic," and that most 4chan posts are just "jokes." That's so reassuring, because I hadn't realized the people saying last week to "not use a shotgun. I would suggest a powerful assault rifle and a pistol or 2x pistols. Possibly the type of pistols who have 15+ ammo" or to "Make everyone get in one corner and then open fire" were just kidding around. Or the ones who after the shooting remarked, "BETA UPRISING IS NOW" were joking. WOW SO LULZ.

I suppose the person who posted about planning an incident for Monday was joshing too, and that the eager supporters saying, "PLEASE be real," "Make sure you got molotovs. it is really easy and painfully way to kill many normies. good luck even through you be kidding," "Please be real try to beat [Virginia tech shooter Seung-Hui] cho's highscore kill them all make them suffer," or the one who posted a very specific and detailed "battle plan" are having fun. I don't know, maybe it's just not so funny when you've spent the past few years watching angry men, especially ones with a history of hatred toward women and minorities, going into public places and killing people.

It should be clear to anyone familiar with healthy and reasonable communication that normal grade satire does not make the FBI issue warnings, or college students hide in their dorm rooms. It should be obvious that men who see themselves as either alphas or betas are really screwed up. I don't expect anyone who doesn't get it to start getting it. But I do want those of us who don't fantasize about picking off "normies" to know these guys are out there, laughing and egging each other on over murdered students and schools on high alert. Congratulations on your uprising, trolls. You've terrorized us all. You won.