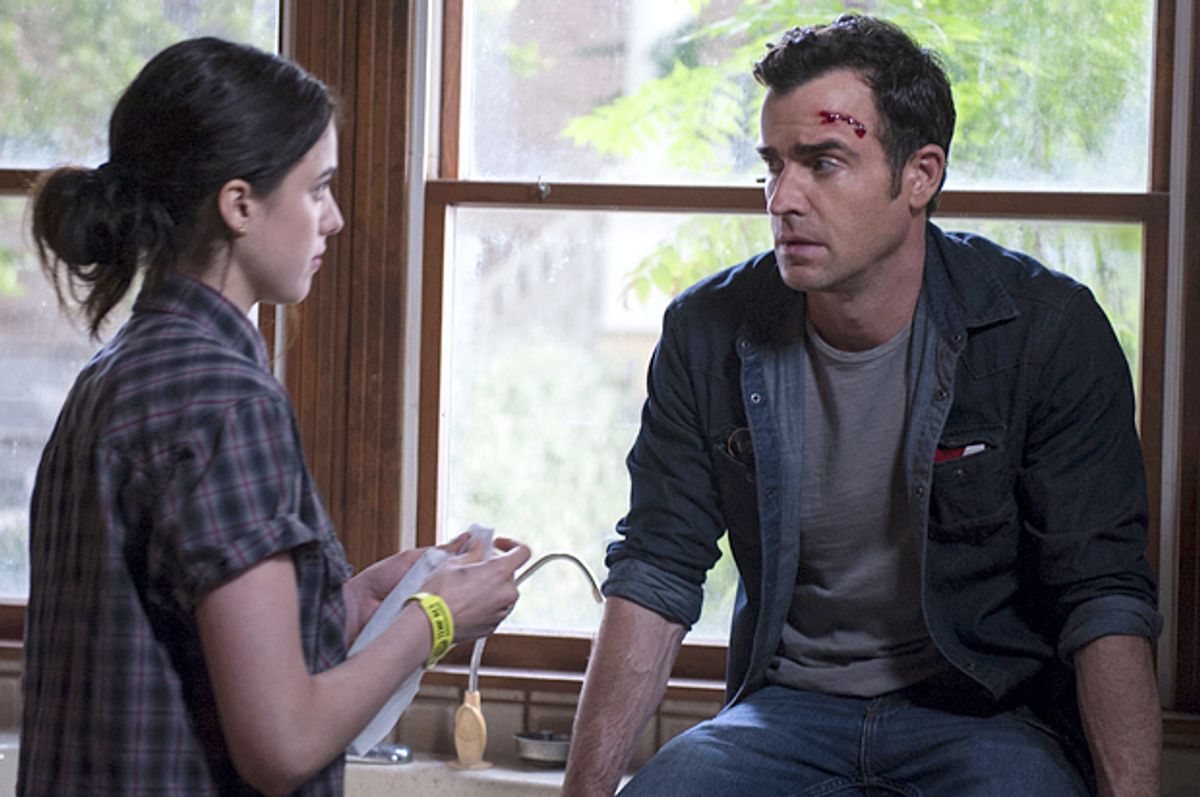 The chiming folk song that opens season two of “The Leftovers” – accompanying idyllic images of children playing outdoors -- is almost enough to give you hope. Maybe all of that bad stuff we remember from last season never happened?

By the end of the first season of “The Leftovers,” a show with a tragic and depressing premise – an unexplained event has taken two percent of the earth’s population, leaving the survivors baffled and broken – has found even more tragic and depressing directions. Crushing guilt, suicide, shattered families, a bizarre religious cult, death by stoning, and other nasty developments worked their way through 10 episodes, many of them built around a suburban New York police chief Kevin (Justin Theroux) and his family.

“The Leftovers” did not pander or settle for pop-psychology clichés, and it worked its story out in a way that was darker in tone than the Tom Perrotta novel on which it was based. Plenty of people respected the show, but when rumors started to circulate that the second season would be set not in Mapleton, N.Y., which had been badly damaged by the departures, but a Texas town that had held onto all of its population, it was natural to expect that the series would be less grim this time around.

It doesn’t take long before the titles breaks to see that the new season, wherever its setting, will again be full of pain and discomfort. It’s not clear what’s going on in the first sequence. A cavewoman escapes an earthquake that kills her rest of her band, giving birth to a baby. After an attack by a snake, the baby survives; she does not. Whether this has simply a thematic or a more literal relationship to the action that follows – which begins with a scene of several teenage girls swimming in what seems to be the same spot – is hard to say. It’s certainly a curious, Kubrickian way to kick off the new season, which now goes beyond the conclusion of the Perrotta novel and is mostly driven by co-creator Damon Lindelof of "Lost."

We get a lot thrown at us in the first episode, much of it portentous or apparently symbolic: A bird freed from a box buried in the earth, a long-bearded man who lives atop a tower, a goat sacrificed in a modest eatery.

At the center of the new season is the town Jarden, nicknamed Miracle. ”We are the 9,261,” a reverend says at a church service, naming the place’s population. “We are spared. And for that we are grateful.” The town has turned into an oddball tourist attraction: Busloads of people disembark to breathe the sacred air, as if they were visiting the birthplace of a saint. “Will it make us safe?” asks a German-speaking couple as they gaze at a sample of the town’s water, offered for sale.

Much of that first episode is told through a family of four headed by John (Kevin Carroll), a firefighter, and his doctor wife Erika (Regina King). This clan – both appealingly familiar but dealing with their own frustration and anxieties – works well dramatically. The one part that seems dissonant, even if it’s integral to the plot, is John’s role as a kind of vigilante who punishes people for their lies and deceptions: We’re aware that he’s a complicated guy, with a prison stint for attempted murder behind him, but watching him burn down the house of an old friend – a palm reader with a huge following -- is hard to believe, even in a show whose premise requires the suspension of disbelief.

Most of the way through the episode, characters from season one begin to show up: Kevin arrives in town with Nora (Carrie Coon), who is the sister of the tormented minister Matt (Christopher Eccleston), who will be taking over at the local church for a few weeks. By bringing the new crew together with the old in a reasonably seamless way, the show manages to give its story new energy without completely disorienting its audience the way an anthology show like “True Detective” or “Fargo” risks doing.

The first episode ends with the disappearance of John and Regina’s daughter as an earthquake hits the town; the water the episode began with has also apparently seeped away.

From those first dimly lit moments in the cave, this episode really moves, and it leaves us with a lot to think about and puzzle over. The series’ perspective will change in episodes two and three, but the first episode offers a lot to look forward to. Strikingly well acted, quietly eerie, emotionally convincing, season two begins with a great, if potentially brutal, sense of possibility.