In the age of the "cuckservative" slur, Trump's "Death Wish" chant is a revealing glimpse into the right-wing id 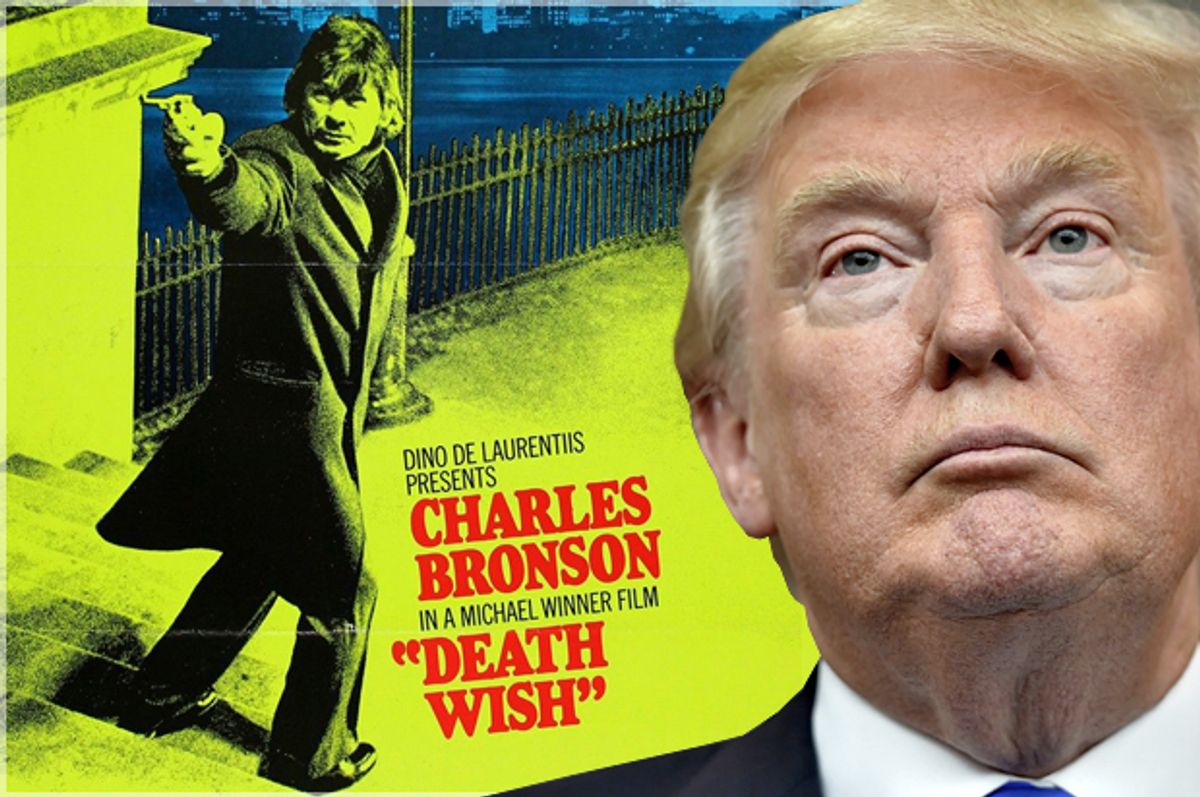 The 2016 Republican primaries are absurdist political theater with a bizarre cast of characters. Donald Trump is the star of the show. He is a Know-Nothing, a nativist, a carnival barker, a professional wrestler wannabe. The supporting players are equally compelling. Ben Carson is a brain surgeon who believes that “Satan” created the theory of evolution to deceive humankind and that the Earth is only 6,000 years old. Carly Fiorina, in her ghoulish politics, willfully lies about Planned Parenthood “harvesting” organs from babies like witches in a midnight Black Mass. And Jeb Bush, channeling Ronald Reagan’s racism, is a man born into gross amounts of unearned advantage and privilege, yet somehow believes that black people are parasites who exist to only want “free stuff” from whites.

The Republican Party’s presidential primary debates have befuddled and confused serious political analysts and those members of the public who exist outside of the fantastical world created by the right-wing propaganda machine. The Republican Party’s candidates portend horrible things for the Common Good and American politics. The GOP is selling political meth; movement conservatives are the users.

Donald Trump whipped a Tennessee crowd into a frenzy Saturday when he declared that he had a gun license and would emulate Charles Bronson in the film “Death Wish” if someone attacked him.

“I have a license to carry in New York, can you believe that?” the tone-deaf Trump bellowed in a bombastic defense of gun rights following the Oregon college massacre.

“Somebody attacks me, they’re gonna be shocked.”

Trump, speaking at a rally in Nashville, professed his love for the 1974 film that depicts a wealthy architect-turned-vigilante — and even led the crowd in chanting its name in unison.

The response is predictable given Trump’s charismatic personality, his simplistic solutions to complex problems, and the authoritarian beliefs of today’s conservatives.

The chants about blood revenge for the Oregon community college massacre reflect a fully propagandized public that has internalized right-wing talking point fictions where the delusional solution to mass shootings is more guns and less restrictive firearms laws. Donald Trump’s reference to the movie "Death Wish" is also a perfect trigger for the politics of white racial resentment and old fashioned racism that he and the Republican Party have deployed for electoral gain since (at least) the end of the Civil Rights Movement.

Popular culture is a space onto which a society’s anxieties, fears, worries, and values are projected. It's also a powerful tool of political socialization that gives the members of a society a way of making sense of the world around them—and their location in it. The "Death Wish" movie series reflected the racial and class anxieties of Reagan-era America and the early 1990s. Like its counterpart "Dirty Harry," "Death Wish" was a space for (White) American wish fulfillment, one where black and brown “thugs” (along with token white “gangbangers” or “outlaw bikers”) in America’s urban centers were killed without mercy by avenging agents of justice and vigilantism. Complex problems such as crime, deindustrialization, and poverty are easily solved by violent cops such as “Harry Callahan” in "Dirty Harry," or “the common man” like “Paul Kersey” in "Death Wish," men who pick up a gun and dispatch “thugs” like so much human debris. Public policies that demand institutional change and billions of dollars are less preferable alternatives to guns and bullets that cost a relative pittance.

Death Wish reflected a broader socio-political imaginary where roving bands of black and brown criminals laid waste to major cities like Chicago, New York, and Los Angeles. White suburban flight and segregation was rationalized as the reasonable response of Nixon’s “silent majority” to the predations of “black crime” and feral black youth who went “wilding” before they supposedly raped white women and beat down white men in places like New York’s Central Park.

The crack epidemic and the War on Drugs demanded mass incarceration of black and brown bodies: the filmic imagination of 1980s action movies provided the justification for such an agenda. In addition, the police in movies such as "Death Wish," the "Dirty Harry" series, and "Fort Apache the Bronx," were depicted as outgunned, incompetent, corrupt—or sometimes all three—thus, the need for a hyper-militarized police force that terrorizes black and brown communities as was recently seen during the Ferguson and Baltimore uprisings.

"Death Wish" and similar American films in the genre were also spaces where generational tensions could be resolved with violence—older white Americans who remember “the good old days” of fictive white suburbia, full employment, and real “family values” would often move from being prey to being victors and vigilantes. The movie "Death Wish 3," even featured the great character actor Martin Balsam, helping Charles Bronson, himself now in his 60s, to form a militia of gray haired warriors who fought off a murderous and rapine group of young toughs. The World War 2 generation would demand respect from the barrel of a pistol—or, as in "Death Wish 3," from a .30 caliber Browning machine gun.

Ronald Reagan would famously quote Clint Eastwood’s character "Dirty Harry" saying “make my day” as the latter is about to kill a black “criminal” with “the most powerful handgun in the world, and would blow your head clean off” -- a potent scene in modern American cinema in which guns, race, white male insecurity, and phallocentrism intersect as Eastwood, holding his huge penis in the form of a .44 Magnum pistol, threatens a subdued black man, here the myth of the big black penis is beaten back by assertive white masculinity, a scene perfect for today’s movement conservatives and their “cuckservative” psycho sexual obsessions.

Like Donald Trump, Reagan’s film allusion is perfect for a (then) candidate who used the racist Southern Strategy to win a presidential election, gave his first campaign speech about “state’s rights” in the same Mississippi county where three civil rights workers were murdered, and also used racially coded “law and order” appeals to win white voters.

(White supremacists have heard Donald Trump’s racist “dog whistle” about the movie "Death Wish" quite clearly: several of their most prominent websites are praising Trump’s racist fantasies of guns, violence, and vigilantism.)

"Death Wish" is Donald Trump’s apparent guide for how best to solve the problems of gun violence and mass: and like most of the policy solutions offered by today’s Republican Party, it is based on lies and distortions about the nature of empirical reality.

Despite the hyper-masculine opines and pleadings offered by the Gun Right, movement conservatives, and the NRA, their dreams of “a good guy with a gun” stopping a mass shooting (or other type of violence) are largely a myth.  “Defensive gun use”—the idea that individual gun owners use their weapons to stop crime—is a cherished tenet of America’s gun obsessives. As argued in the October 2015 issue of the journal Preventive Medicine, this so-called “commonsense” is untrue. Conservatives and the Gun Right have a second cherished myth: more guns equal less crime. This claim has also been debunked. Moreover, social scientists have shown that there is a direct relationship between the number of guns in a society and gun violence.

Experts on interpersonal violence such as David Grossman have demonstrated that it is extremely difficult for a person to kill another human being, reliably, on command, and under stress, with a gun. The dream scenario of an individual person using their gun to stop a mass shooting is refuted by experts in police training and military tactics who detail how fighting in enclosed spaces such as a school or other building is extremely difficult for even highly trained personal. In fact, a group of gun fetishists recently tried to simulate their response to a terrorist attack like the Charlie Hebdo shootings in France. Their goal was to show that “a good guy with a gun” could stop “bad guys” with a gun.

The result? The "Death Wish" and "Dirty Harry" role-playing heroes embarrassed themselves as they were repeatedly “killed” in the exercise.

When Donald Trump and thousands of his supporters chant “Death Wish” they are not offering a harmless act of enthusiastic support for a 1980s cult classic movie. No, this is a personal statement of threat against “black crime” in a moment when racist Stand Your Ground Laws have empowered white people to kill people of color with near impunity.

This dynamic is magnified by how in the United States, gun ownership, and hostility to gun control regulations are highly correlated with white racial animus and symbolic racism towards African-Americans.

Trump’s “Death Wish” chant also channels a culture of violence and cruelty where those who kill black youth such as Michael Brown and Trayvon Martin are enriched through online donations by those individuals who wish that they could have pulled the trigger, thus “enjoying” white racist vigilante fantasies of committing a new age lynching against a person of color.

Racism, guns, aggrieved masculinity, and a love of violence and militarism are not peripheral to movement conservatism, they are central to it. And like a petit-African or Central American dictator, who waves his pistol about while talking tough, Donald Trump knows his audience and how to best manipulate them with his proto fascist professional wrestling carnival barker shtick.

Unfortunately, Trump’s hustle is not confined to loving a 1980s action movie or comic book vigilante. These are the dreams of a man who wants to be President of the United States and is the Republican Party’s leading candidate in the 2016 primary race.