Jason Chaffetz, grandstanding charlatan: What you need to know about the GOP's shameless up-and-comer

The Planned Parenthood tormentor and Tea Party favorite tosses his hat in the Speaker's race ring. A primer 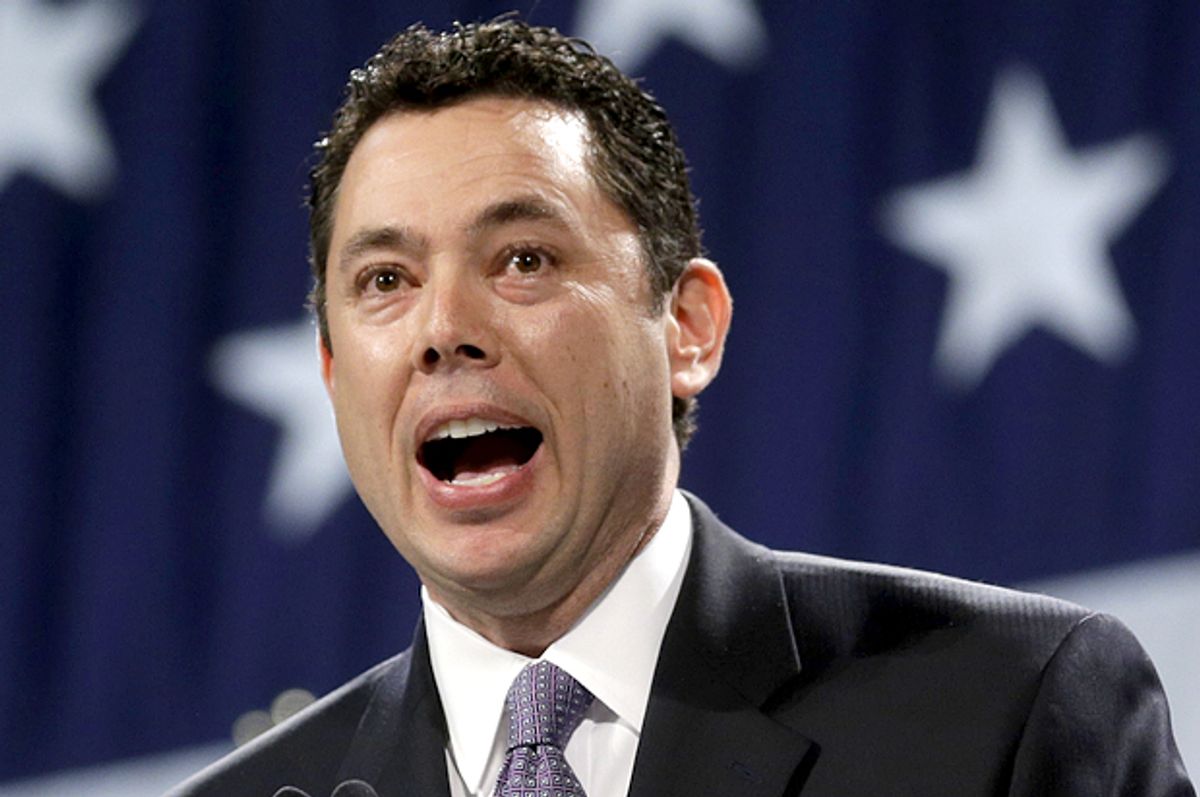 The news that Utah congressman Jason Chaffetz has decided to throw his hat into the ring for speaker shouldn't have surprised the denizens of the Beltway as much as it did. After all, it had been Chaffetz week on Capitol Hill. If you had checked in on politics for the first time several months, you'd have thought Chaffetz was the rising superstar in Republican politics. He was everywhere.

At the beginning of last week, it looked as though the he couldn't win for losing. As the chairman of the House Oversight and Government Reform committee, he presided over an interrogation of the president of Planned Parenthood, Cecile Richards, in a performance that was both bullying and ineffectual -- which may be the worst of all possible worlds. Progressives were outraged at Chaffetz's aggressive questioning of Richards and interrupting her before she could answer, while conservatives were angry that he nonetheless failed to land any punches.

If you're wondering why Boehner was days away from getting canned, today's nonsense is why. Case study in ineptitude of failure theater.

Can you imagine if this band of incompetent morons had been in charge of prosecuting the Nuremberg trials? My goodness what a farce.

It's unknown what they expected, but presumably they had hoped to somehow vanquish Planned Parenthood with one put-away shot that failed to materialize. At the end of the hearings, with Richards having clearly prevailed, Chaffetz looked to be the week's GOP goat. (Well, assuming one of the presidential candidates didn't say anything dumb.)

But as luck would have it, just as Chaffetz's reputation looked to be seriously frayed, his star rose once again when the Washington Post reported that the director of the Secret Service had wanted to release personal information on Chaffetz in retaliation for his contentious oversight of the agency in the wake of the various tabloid scandals that have plagued it in recent years. Needless to say, civil libertarians and elected officials on both sides of the aisle were appalled by such an abuse of power and Chaffetz was back on TV, this time as the victim of government abuse, instead of as the abuser.

And then came presumptive Speaker, Kevin "Loose Lips Sink Ships" McCarthy, with his now-infamous admission that the Select Committee on Benghazi was a political enterprise which was being used to damage Hillary Clinton. (As he said to Jake Tapper on CNN: "Have the select committee get all the information, all the hearings, so the public can see that. You win the argument to win the vote.")

It was already obvious that the select committee was misusing its authority since there had already been eight earlier investigations which had thoroughly examined the facts and issued numerous reports, but McCarthy's admission pulled back the very thin veil of legitimacy and exposed the Republicans to charges of malfeasance. But among the first to rush to the cameras was none other than Jason Chaffetz, the man who had just hours before been justly railing against the Secret Service illegally using its authority to damage his reputation, defending the Benghazi committee for doing the same thing and criticizing his friend Kevin McCarthy for accidentally speaking the truth.

Everywhere you turned, it seemed Jason Chaffetz was on television, so much so that if you didn't know better you might think he was running for speaker himself. Lo and behold, by the weekend, he was. A week that started off with him brow-beating the director of Planned Parenthood ended with him on "Fox News Sunday" and explaining to Politico that his rationale for running for Speaker was his superior communication skills. (And truthfully, compared to McCarthy, he's Winston Churchill.)

Chaffetz is a well-known figure on Capitol Hill but the average member of the public, if they know him at all, probably remembers him mainly as the guy who sleeps on a cot in his office rather than spring for a room somewhere. But he's been marked for stardom since he was a college football star: In the words of Dave Weigel in this 2010 article, "when [Chaffetz] started to make it in politics, his teammates would recall how, after successful kicks, he would remove his helmet to reveal a perfect head of hair for the TV cameras."

The son of a man once married to Kitty Dukakis, wife of 1988 Democratic presidential nominee Michael, Chaffetz started off as a Jewish Democrat, then converted to Mormonism during his last year of college in Utah -- and Republicanism when former President Ronald Reagan was hired as a motivational speaker for Nu Skin, the "multi-level marketing" company (think Amway) which employed Chaffetz for a decade before he entered politics. He worked as chief of staff for the famously moderate Gov. Jon Huntsman and then beat the very conservative Representative Chris Cannon by running against him from the right in the 2010 Tea Party electoral bloodbath. On Election Night, Cannon said, "the extremists who don’t want to win elections have taken over the party. We don’t want that to happen in Utah. Politics is way too important to leave to the boors."

Chaffetz's former boss Huntsman had this to say about his former chief of staff:

And despite his politically eclectic past, Chaffetz has stuck to his arch-conservative guns during the five years he's been in Congress. He wants to slash Social Security, ban gay marriage and look into impeaching President Obama. Still, he sees himself as a sort of mediator between the hard-core Tea Party insurrectionists and everyone else -- perhaps because he's been everything from a liberal Democrat to a moderate Republican to a hard-right zealot, depending on where the opportunities lie at any given moment.

He is good communicator, except for the fact that he seems to have a tiny problem with the truth, which he perfectly illustrated in the Planned Parenthood hearing, when he offered up a chart so misleading that it caused Politifact to call it not only misleading, but, quoting one expert, "ethically wrong." And while he may have a point that Kevin McCarthy screwed the pooch on Trey Gowdy's Benghazi committee, his own history of being loose-lipped and excitable puts McCarthy's little faux pas to shame.

As The Washington Post's Dana Milbank reported on one of the earlier Benghazi investigations led by congressman Darrell Issa:

Through their outbursts, cryptic language and boneheaded questioning of State Department officials, the committee members left little doubt that one of the two compounds at which the Americans were killed, described by the administration as a “consulate” and a nearby “annex,” was a CIA base. They did this, helpfully, in a televised public hearing.

Rep. Jason Chaffetz (R-Utah) was the first to unmask the spooks. “Point of order! Point of order!” he called out as a State Department security official, seated in front of an aerial photo of the U.S. facilities in Benghazi, described the chaotic night of the attack. “We’re getting into classified issues that deal with sources and methods that would be totally inappropriate in an open forum such as this.”

A State Department official assured him that the material was “entirely unclassified” and that the photo was from a commercial satellite. “I totally object to the use of that photo,” Chaffetz continued. He went on to say that “I was told specifically while I was in Libya I could not and should not ever talk about what you’re showing here today.”

Now that Chaffetz had alerted potential bad guys that something valuable was in the photo, the chairman, Darrell Issa (R-Calif.), attempted to lock the barn door through which the horse had just bolted. “I would direct that that chart be taken down,” he said, although it already had been on C-SPAN. “In this hearing room, we’re not going to point out details of what may still in fact be a facility of the United States government or more facilities.”

If any members of Congress are thinking that Jason Chaffetz will be a more mature and professional leader than Kevin McCarthy, they might want to think again.

The other speaker candidate is Florida congressman Daniel Webster, a far-right religious extremist who is not expected to win more than a handful of votes. And the smart money remains on McCarthy, because he's already part of the leadership and is, believe it or not, the most experienced person running, despite the fact that he's only been in Congress since 2007. But Chaffetz is a comer. Regardless of where he ends up in this Speaker's race, it's not going to be the last time we hear from him. As long as there are cameras on Capitol Hill, you can be sure he'll be nearby rapidly assessing what posture to assume to take advantage of the moment.