This is Larry Wilmore's brilliant moment: It's not all about Trevor Noah on Comedy Central

Noah hasn't quite found his footing, but at 11:30 p.m., Larry Wilmore is bringing the brilliance night after night 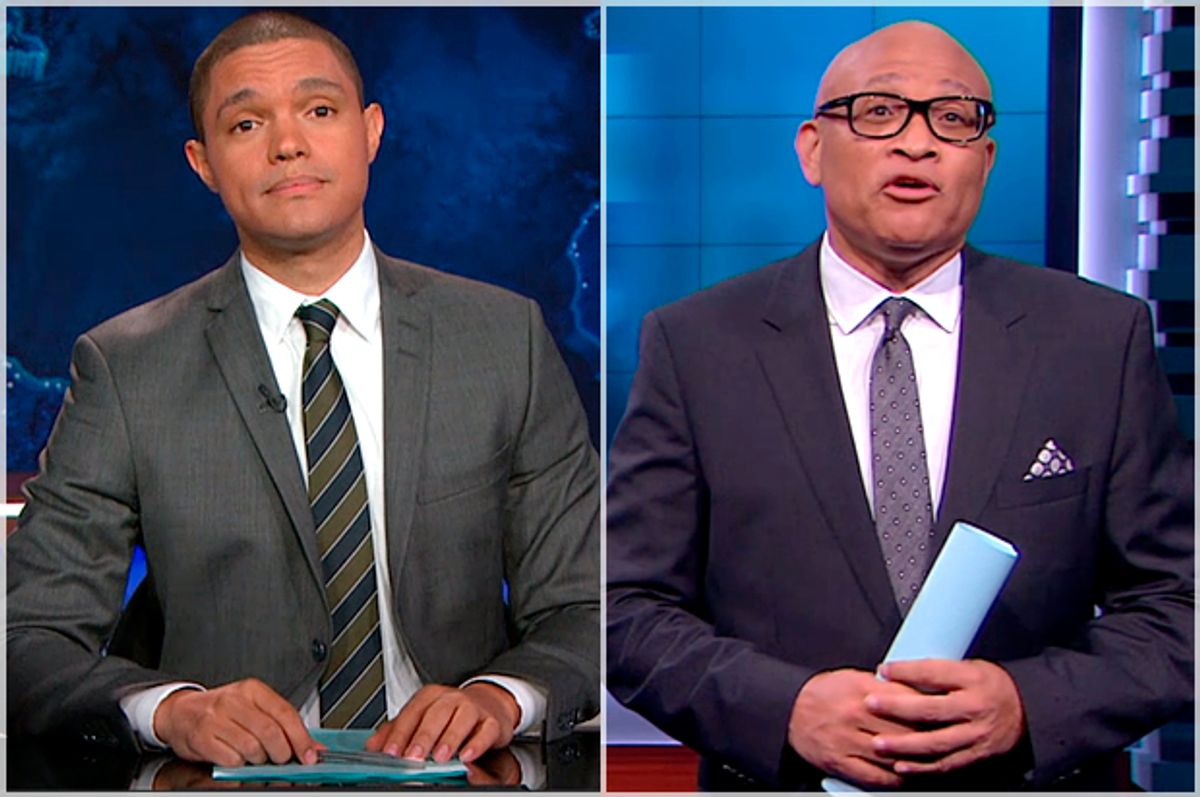 As Trevor Noah stepped in to take over “The Daily Show" there was much speculation about whether the new host could keep Jon Stewart’s satirical edge.  Now, after the first week, the early results are in and they aren’t that encouraging.  Noah offers a young, fresh, multicultural take on political comedy, but he has yet to come close to offering viewers Stewart-style comedy.

Noah’s disappointing debut may have a surprising upside, though:  Viewers now can stay tuned after his show to catch “The Nightly Show” with Larry Wilmore, which follows in the slot directly after.  Watching the two shows back-to-back – or, as Wilmore puts it, “black to black” -- offers viewers a chance to compare two different approaches to political comedy.

Noah’s brand of silly, toothless comedy has served to highlight the fact that Larry Wilmore’s show is offering viewers not just a sharp edge, but also a much-needed “underdog” angle on the pressing issues of the day.  While this was the case during the time that Stewart was the lead in to Wilmore—now that he follows Noah, it is actually much easier to appreciate the specific comic genius of Wilmore and his team.

On the night of Noah’s debut, Wilmore began his show by telling his viewers: “New ‘Daily Show’ viewers don’t be confused. I am a different light-skinned brother late night host.” He went on to mention Jeb Bush’s comment that Democrats get the black vote by offering them “free stuff.” He then offered Bush something free -- and flipped him the bird with a look of total disgust.  Those first few seconds of “The Nightly Show” marked a sharp contrast against a grinning Noah and his soft-punch comedy.

The next “Nightly Show” story covered the 2016 Presidential race with a bit on the “unblackening of the White House,” followed by a piece with reporting by “Nightly Show” contributor Holly Walker that covered gun owners who have shot themselves in the penis. The panel conversation that closed the show included Black Lives Matter activist Deray Mckesson—certainly a different sort of guest than actor/comedian Kevin Hart, who was Noah’s first guest.   Viewers who had just watched Noah would not have been able to miss the deep contrast in each host’s brand of comedy.

Some of the first week’s highlights include a piece featuring Jordan Klepper that compares U.S. disinterest in Syria alongside its obsession with pumpkin spice, a piece with Desi Lydic and Hasan Minhaj that highlights the way that U.S. art collectors are funding ISIS by buying the antiquities they sell, and a piece with Roy Wood Jr. and Jordan Klepper on racism in the police force.  Those bits were the closest viewers came to signature Stewart comedy—sharp, funny, and smart.

That’s the good news.  The bad news, though, is very bad. Besides moments of flip humor that are in poor taste, like dick jokes about the Pope, Noah revealed that he was more interested in a laugh than in politically savvy comedy.  As comedians well know—not all humor is equal.  Laughs are cheap. But laughs at the expense of others are really cheap.  Laughs that get the audience to think, in contrast, are a much harder skill.  That sort of humor was Stewart’s special gift and we haven’t seen it yet from Noah.

Here’s one example of Noah’s style.  Noah went for the easy laugh when he decided to mock African politics as a way to make a joke about Trump.  The joke was based on the idea that many of the most outlandish Trump moments can be compared to almost identical statements from a variety of current and former African leaders, including South African president Jacob Zuma, Zimbabwe president Robert Mugabe, and even the former Libyan leader, Muammar al-Gaddafi. He lined up quotes from these notorious leaders and offered almost verbatim segments from Trump.  After running clips that suggested Trump was not presidential, Noah concluded that indeed he was-- he would be the perfect African president: “This country is capable of bold leaps. It took one in 2008 when it elected its first black president. Now in 2016 I say it is time to be bold once more and elect America’s first African president.”  Watch the clip here.

First it has to be said that only someone like Noah, who is from South Africa, could make a joke like that and not suffer severe backlash.  But just because Noah is African doesn’t give him a pass on a bit that is, at its heart, profoundly discriminatory.  The funny thing is that within Africa the joke might have worked better—since an African audience would have been well aware of a string of African leaders who are not lunatics, but in the U.S., such assumptions don’t work.  Even though “Daily Show” viewers are likely sensitive to the hubris of American exceptionalism, they are not immune to U.S. cultural arrogance.

Noah could have compared Trump to a range of other global strongmen who have said crazy things—including ones from Europe like Mussolini or Franco—but he held his comparisons to Africa.  The joke, then, is actually on Africa as much as it is on Trump. And for a U.S. audience that likely knows little, if anything, about African politics, the bit only confirms that African politicians are uncivilized narcissists.   It’s also a complete reversal from the angle he took when he appeared alongside Stewart on “The Daily Show” when he played “spot the Africa” and joked that Stewart had only negative ideas about the continent.

Meanwhile, nothing in the bit raised any view of Trump that we haven’t seen already.   It is hard to explain why Noah would have gone after such a cheap joke.  And it is really hard to understand how he could build a joke that depends on not having any respect for Africa.

This is why the comedy of Wilmore on “The Nightly Show” is so refreshing.  Wilmore’s show focuses on offering the view of the underdog on current political issues.  That means he is unafraid to confront moments when racial bias is at stake –but it also means that race is not the only diverse comedic edge to the show. The show debuted at the start of this year as a replacement for “The Colbert Report” and it has become more polished and more provocative as the months have gone by. According to an August 18 piece in “The Hollywood Reporter,” “The Nightly Show's brand of smart, focused comedy mixed with more serious-minded commentary has really found its stride in recent months, with Wilmore's desk bits getting sharper and panel discussions becoming more consistently engaging.”

The show blends the format of “The Daily Show” and “Politically Incorrect.”  Wilmore does a quick stand-up lead in and then sits behind his desk to run down headlines—often with input from a member of the staff. The last segment is a panel where Wilmore moderates a conversation with three others. The choice of guests is designed to offer a range of viewpoints to the audience. Rather than an interview, where success depends on the interaction between the comedian and guest, the panel format models a complex conversation on a tough issue.  From the perspective of satire, the result is smart, since including four perspectives means that the audience is encouraged to move away from considering issues in stark “black and white” terms.

As Wilmore himself explained to “Mashable,” the idea is to offer a form of comedy that wasn’t available before: “Hopefully we're doing stuff that nobody else is really doing — looking at culture from our distinct point of view, taking the point of view of the underdog. We always feel like any major event that happens in this country, there's probably race, class or gender — one of those three things — at the heart of it, and we just try to shine a light on that and give it a platform.”

That is why, rather than compare Trump to an African president, Wilmore went after the scandal over Trump University. Wilmore offered viewers insight into one of the many ways that Trump has conned people, in this case students, to pay him in return for nothing.  Then when he brought in a contributor posing as a Trump U graduate, “Miles Fleischhaker,” to comment on his experience, he was able to factor in a larger critique on student debt and challenges with higher education.

Fleischhaker tells Wilmore he is following in Trump’s footsteps and founding his own university, but Wilmore tells him his plan won’t work.  The response: “No, it’s my students that won’t work. I have to say that what I am teaching them is how to link their checking accounts for direct deposit to my S-corp, which is located in Switzerland. It is simple Trumpenomics.”  When Wilmore asked if the campus background behind him was real,  Fleischhaker ended by saying, of course not. “It’s like Trump’s candidacy. There’s absolutely no substance here.” Watch the full clip here.

During the panel discussion one of the topics was Trump’s tax plan, which Robert Reich referred to as “doo-doo economics.” It was funny and smart. And it was a huge difference from the sort of comedy viewers had seen on the Comedy Central show that preceded it.

Like I said, I am sure that Noah will grow into his show and it makes sense to cut him slack.  But jokes like the one comparing Trump to a string of African presidents deserve no slack at all.  And they harken back to the deprecating humor of Noah’s jokes at the expense of fat chicks and Jewish kids.  That sort of humor has absolutely nothing in common with the humor of either Stewart or Wilmore.  Neither one of them would go for a laugh that depended on making an entire continent look like a bunch of idiots.

Noah tells us that Stewart’s advice was to follow his instinct: "The most important thing he [told me] was, 'Trust your instincts, trust your doubts and discomforts. So, if you feel like you shouldn't be going in that direction, that's the direction you shouldn't be going in.'" It’s hard to make sense of Noah’s sense of direction at this point.  One thing seems clear: he could benefit by taking cues from the sharp satirical wit of Wilmore.  Wilmore was the former “Senior Black Correspondent” on “The Daily Show” after all.