We must despise our kids: Our ugly war on teachers must end now

Republicans and Democrats can agree on one thing: Demonizing teachers. It's the "reformers" doing the most harm 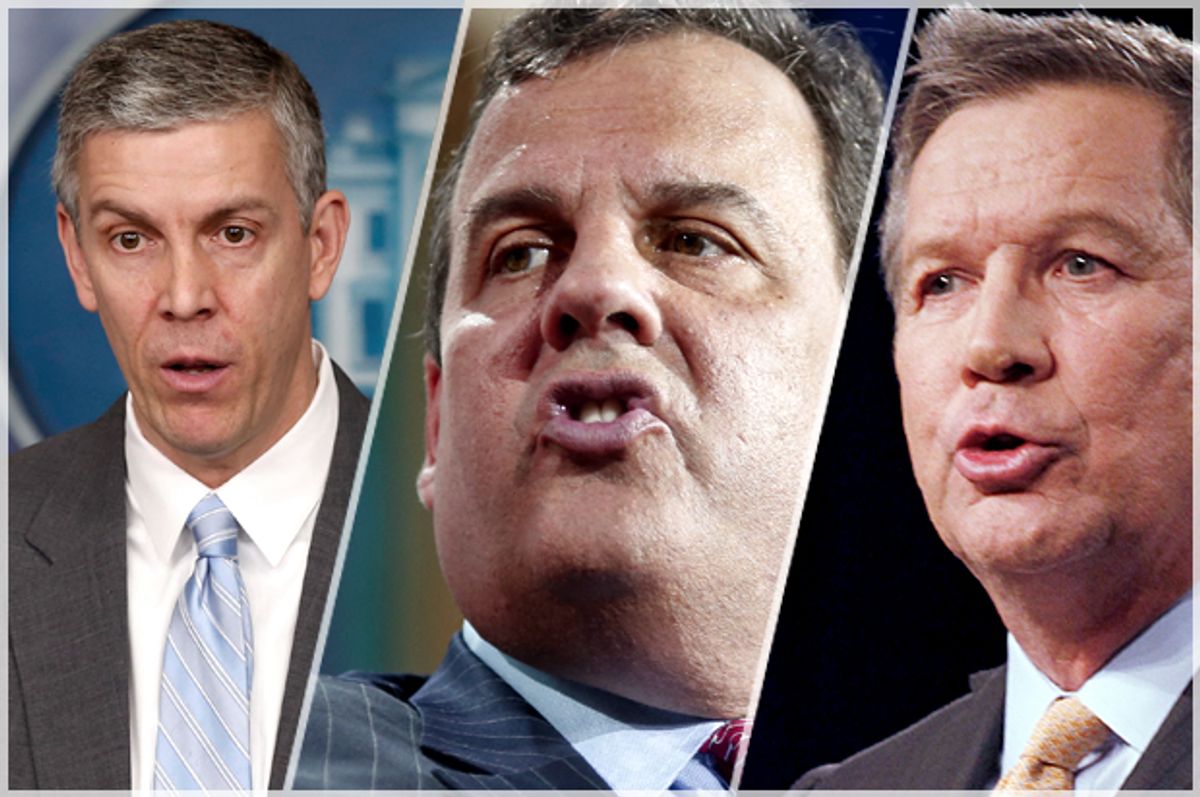 Last week’s jobs report showed the labor market decelerating. This appears to be the fifth straight year that promising signs in the winter end up softening in the summer and fall. And indicators like the labor force participation rate (which is at a 38-year low) and wage growth (which has stagnated for decades, including in what should be a surge period since the Great Recession) make it look even worse.

But Elise Gould of the Economic Policy Institute dug out perhaps the worst numbers in the report. With September’s data in, we can see how many teachers went back to school this year. And Gould finds that the tremendous gap that opened up when local budgets crashed during the recession has not come close to being filled.

At the peak, we had 8.1 million public K-12 education teachers and staff in July 2008. Seven years later, we have far less, 7.8 million, despite a larger population of students that need to be served. According to EPI, the local public education shortfall, accounting for additional student enrollment, is 410,000 jobs.

This means that classrooms built for 25 or 30 students now have 35 or 40 in them. It means that kids don’t get the same level of personalized instruction, or in some cases any attention at all. It means that programs like art and music have to be excised, or extracurricular activities, simply because there are no resources available to staff them.

Obviously the main culprit of this tremendous and damaging shortfall in student learning is austerity budgeting around the country. Most funding for public schools comes from the states, and they have not rebounded to pre-recession funding levels, nor have they made education enough of a priority to keep up. Though teaching children is routinely stated as our nation’s most important priority in political campaigns, we treat it in the exact opposite manner in budget documents.

But there’s a bigger point to be made here, first brought up by blogger Duncan Black, aka Atrios. Speaking of teachers, Atrios wrote, “who could have predicted that demonizing them, cutting salaries and benefits, and reducing job security might make it a slightly less attractive option for people.”

The amazing thing is just how bipartisan this campaign to denigrate the American teacher has been. We know about the war on public employees on the Republican side, from Scott Walker on down. States under Republican control have routinely eliminated collective bargaining rights, cut retirement benefits, and generally made teaching a less lucrative profession. They’ve also painted a picture of greedy teacher’s unions who deserve “a punch in the face,” according to presidential candidate Chris Christie. Another candidate, John Kasich, signed a law to create a “CEO” position for school districts, armed with the power to override some elements of union contracts.

But putting that expected belligerence aside, teachers have faced assault from their nominal allies for the entirety of the Obama administration. The end of Arne Duncan’s tenure as education secretary puts this into stark relief.

Duncan’s support for charter schools with fewer worker protections, and a “Race to the Top” program that used federal money as a carrot to force states to change their education policies, won rebuke from major teachers unions. He pushed getting rid of “bad teachers” through evaluations that many have criticized as inaccurate. He said that Hurricane Katrina was the best thing to ever happen to the education system in New Orleans, basing this notion on certain test scores improving (largely by removing the most poverty-stricken residents from the population) and not the lived reality of people in the city. And the botched response to the collapse of for-profit colleges puts a further damages Duncan’s legacy, with the perception that he left students behind and protected industries with lucrative contracts servicing student loans.

Duncan is not alone among Democratic luminaries and their antipathy toward teachers. Chicago Mayor Rahm Emanuel has repeatedly attacked and insulted teachers during his tenure, to say nothing of closing down public schools and opening up charters. New York Gov. Andrew Cuomo has pushed policies that teacher’s unions oppose, designed to threaten their job security.

I wouldn’t expect Duncan’s replacement, John King, to turn this around. During his tenure as New York’s education chief, King was given a vote of no confidence by the state teachers union just last April. New York State Unified Teachers said upon the announcement that they have “always considered John King an ideologue with whom we disagreed sharply on many issues.”

There’s a human cost to the fight over education reform, in other words. The trumped-up atmosphere of crisis around American public schools – which is debatable at best and flat-out wrong at worst – contributes to weakening morale for a profession that everyone describes as critical. If the schools are all failing and must be rescued for the sake of our children, then necessarily the teachers are failing. And if you’re constantly called a failure at your job, you naturally don’t see that as a particularly good job to have.

My mother was a public schoolteacher for over 35 years. There was a time when teaching was seen as a noble profession, a contribution to the betterment of society, a job deserving of merit and respect. Today, 13 percent of all teachers leave the education field every year. Layers of education reforms have done little, if anything, for improving or “revolutionizing” the teaching of students, but they sure have demoralized a lot of teachers.

This has massive effects on our long-range economic future. Everyone highlights education as critical to keeping up in a global economy. If you short-change education and repel prospective educators by vilifying them, that will spill over into the next generation’s skills and preparation. In a bid to achieve “high standards” for children, education reformers are hurting them more.

At a time when we have to recruit 400,000 new teachers just to get back to an acceptable per-pupil level, fighting a war over public education seems extremely unwise. Of course, there’s still time to fund public education to attract the best teachers, and laud their work in creating a better society. But that would perhaps be too much to ask.