Ben Carson is just this vile: 5 repugnant statements he's made since the Oregon mass shooting

Dr. Carson's hypothetical exhibits a callous indifference that goes beyond tone deafness. It's a trend 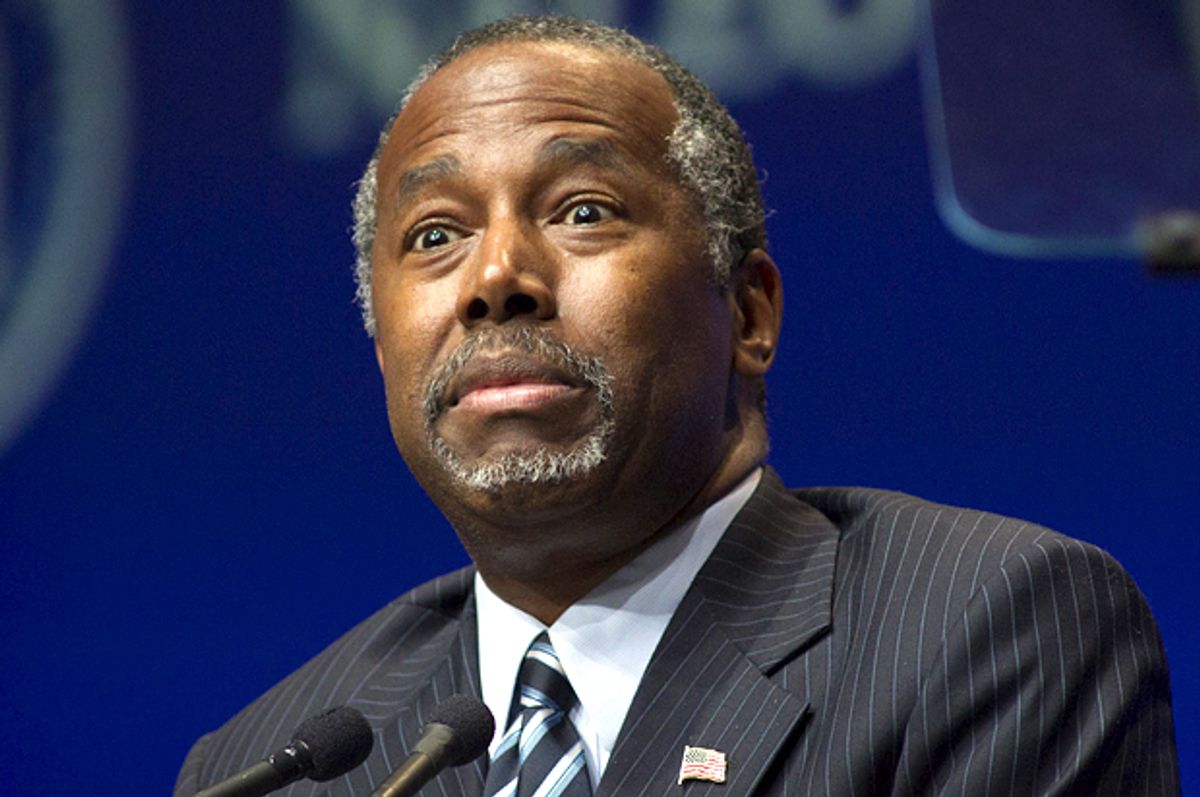 Republican voters may be hungry for a Washington outsider, but being a political novice and running for president is proving to be a rather tricky undertaking for former neurosurgeon Ben Carson, who has found himself at the center of yet another storm of controversy over his comments on last week's deadly shooting rampage at Umpqua Community College in Roseburg, Oregon.

In a matter of days, Carson has seemingly blamed the victims for failing to jump the gunman, dismissed bullet-ridden dead bodies as simply the cost of freedom and called for the arming of kindergarten teachers.

And it's only Wednesday:

During a visit to "Fox & Friends" on Tuesday, Carson took on the typical conservative complaint that any mention of gun control in the aftermath of a mass shooting is a ploy to "politicize" tragedy.

“When do we have people that actually want to solve our problems, rather than just politicize everything?” Carson asked the hosts.

“Guns don’t kill people,” he insisted, “and the Second Amendment is extremely important. And Daniel Webster said that America would never suffer tyranny because people are armed.”

Carson has credited Webster for his newfound and ardent anti-gun control views. While Carson once supported the idea of banning assault weapons and armor-piercing ammunition, he says he has since changed his mind.

"Reading people like Daniel Webster, who talked about tyranny in Europe and said it would never occur in America because the American people were armed," he told USA Today this week. "When you look at tyranny and how it occurs, the pattern is so consistent: Get rid of the guns for the people first so you can go in and dominate them."

Carson is out promoting his new book, "A More Perfect Union," and has been stumbling left and right over the issue of guns all across the media.

On Tuesday, Carson stopped by ABC's "The View" to take a grilling from the ladies. Co-host Joy Behar asked Carson about comments he made to USA Today's Susan Page earlier in the week.

"If I had a little kid in kindergarten somewhere I would feel much more comfortable if I knew on that campus there was a police officer or somebody who was trained with a weapon," Carson told Page.

"If the teacher was trained in the use of that weapon and had access to it, I would be much more comfortable if they had one than if they didn't."

"If the gunman comes in with an AK-45, or AR-15, how fast can that teacher go to the locked drawer and get that gun?" Behar followed-up on "The View."

“Not all kindergarten teachers. I said people who are trained and understand all the implications,” Carson backtracked. “And you’re obviously not just going to have a weapon sitting on the kindergarten teacher’s desk. It would be secured in a place where kids could not get to it.”

"As a Doctor, I spent many a night pulling bullets out of bodies," Carson wrote in a Facebook question and answer session Monday evening.

"There is no doubt that this senseless violence is breathtaking – but I never saw a body with bullet holes that was more devastating than taking the right to arm ourselves away. Serious people seek serious solutions."

Carson seemed disturbingly resigned to the constant national mourning over mass shootings in America we've been accustomed to when he told Fox News' Brian Kilmeade that he would skip a trip to the grief stricken town of Roseburg if he were president. There are reports that some residents will protest President Obama's upcoming visit because of his remarks on gun control.

“I would probably have so many things on my agenda that I’d go to the next one,” Carson offered nonchalantly.

Carson's vicious victim blaming: "I would not just stand there and let him shoot me"

“Not only would I probably not cooperate with him, I would not just stand there and let him shoot me, I would say, ‘Hey guys, everybody attack him. He may shoot me, but he can’t get us all,’” Carson said during that same Fox News interview.

"I would ask everybody to attack the gunman because he can only shoot one of us at a time. That way, we don't all wind up dead," Carson repeated again during an interview with ABC News while chuckling on Tuesday.

But in an interview on the "The Kelly File" on Fox News Tuesday night, Carson tried to clean up his mess, explaining that he meant no offense to the shooting victims but just wanted to  "plant the seed in people's minds" that this is how they should behave when confronted by a gunman.

"If everybody attacks that gunman, he's not going to be able to kill everybody. But if you sit there and let him shoot you one-by-one, you're all going to be dead," Carson explained. "And, you know, maybe these are things that people don't think about. It's certainly something that I would be thinking about.":

This last line got Carson in so much trouble that even his biggest political rival had to jump in and defend him: