I fought for nothing: Staggering incompetence, egregious corruption & America's doomed war in Afghanistan

As the U.S. watches Kunduz fall, I'm left contemplating the lessons of a war whose meager gains are evaporating 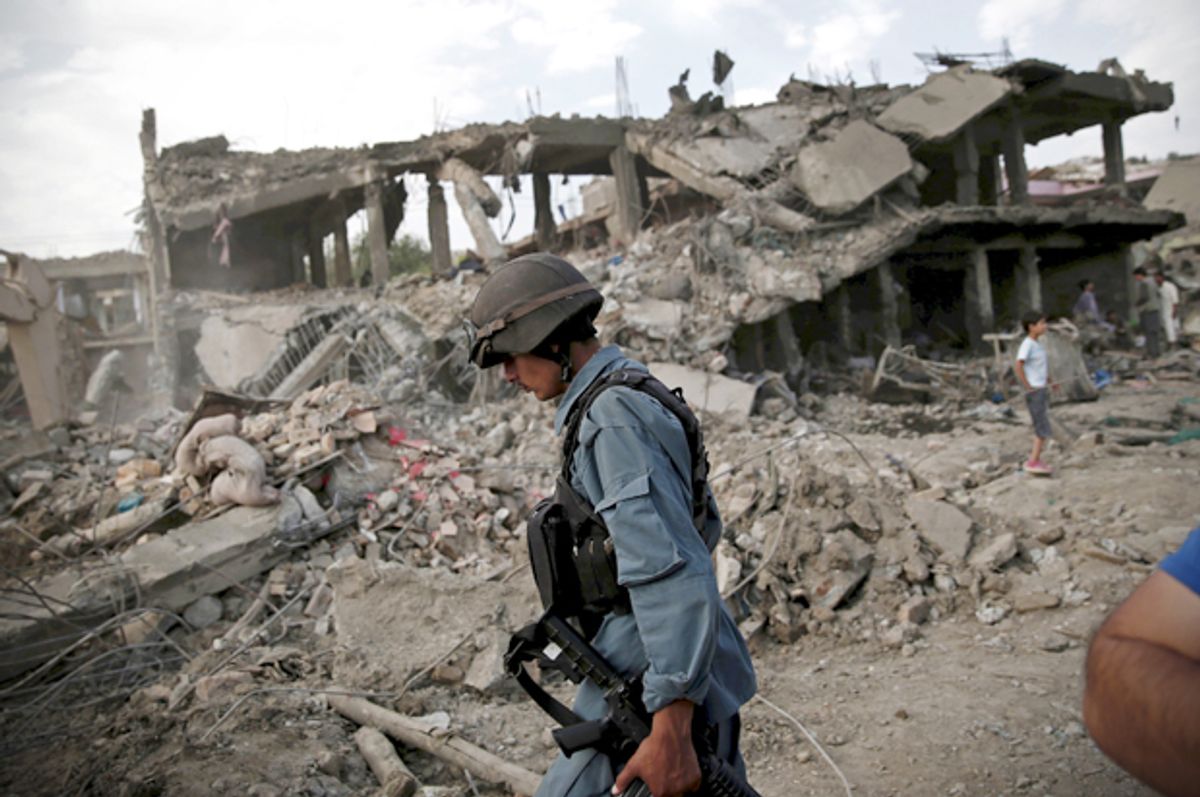 I’ve been waiting for the fall of Kunduz.  Not Kunduz, specifically, but the fall of a town in Afghanistan of some size and importance. It was my prediction back in 2005, when I left the war, that eventually we would lose it. In the decade since, it was a prediction I felt more comfortable making. The full length of my prediction is this:  The fledgling corrupt government that we have supported will increasingly find itself losing cities to the Taliban. Eventually, Afghanistan will splinter into fragments, most of them outside the penumbra of protection offered by the weak central government. In time, Afghanistan will lose all of the meager gains that I and other American soldiers fought for.

It will be as if we fought for nothing.

This will occur because Afghanistan has never provided us with a competent governmental partner.  This will occur because the Afghan people never viewed themselves as citizens of a nation-state. This will also occur because so much of our wartime effort was lost to a decade of constantly changing strategies, a decade where we continually squandered any momentum that previous commands had managed to build, and where a lack of institutional memory about the experiences of the soldiers that came before meant we were always starting over.

I was a probation officer in Colorado when 9/11 happened. I was one of those perpetual students who just kept going back to college for subsequent degrees because they weren’t quite ready to move on to something else. I suppose you could say the specter of war provided me with that special something I was looking for. A week after the attacks, I spent my lunch hour at the Army recruiter’s office. I was very specific with what I wanted:  I wanted to join the infantry and go to Afghanistan. I had the requisite college education necessary to enter as an officer, but that required a longer time commitment than I was willing to make, and after three years of graduate school, I wanted to give my brain a rest: I just wanted to fight.  I was somewhat new to my job, so I put myself in the delayed entry program; that way I wouldn’t go to Basic Training for a year’s time. Then, when I got out of the Army, I could have the job experience on my résumé.  I remember worrying at the time that I would regret the delay, that the fight would be over by the time I could be trained up and sent over. I thought if I didn’t make it to Afghanistan by late 2003, I might miss it.  Of course, 14 years later, that makes me laugh.

I finally joined the fight in May 2004 with the 2nd battalion, 5th infantry, part of the 25th Infantry Division in Hawaii. For a year, we deployed around the country, perpetually being moved from one piece of desirous Afghanistan real estate to the next. It was as if the Army wasn’t quite sure where they wanted to put us, or how we should help the war effort.

They also weren’t quite sure when we first arrived, what posture they wanted us to assume.  We arrived as steely-eyed infantry combat killers, ready to charge into battle.  But the docile area we first found ourselves within and the zealotry of 19-year-old soldiers resulted in some unfortunate incidents that made our relationship with our indigenous hosts difficult, and we were soon told to instead act as friendly ambassadors for our nation.  We were told to win hearts and minds.  But this proved an unworkable doctrine when faced, in our third posting, with rough and tumble Taliban forces trying to kill us. So it was back to being infantry combat killers. In all fairness, though, just a few years in, it should have been expected that we’d be still trying to find our identity. Unfortunately, friends I’ve talked to on more recent deployments report the same identity crisis. Throughout the war, there’s been constant changing of both the rules of engagement and the levels of aggressiveness U.S. soldiers have been asked to demonstrate.

A problem I noticed early on in my deployment was not having an institutional memory for the larger war-fighting effort.  We had only a week and a half train-up with the first troops that we replaced and it was hardly sufficient.

Quickly left on our own after the previous soldiers rotated home, we would visit remote villages and presume we were their first contact with coalition forces, only to be informed as we left that the 10th Mountain had visited them six months ago and promised the same water wells and schools that we had just tried to bribe them with.  The difference was that we were going to follow through on our bribes. Inevitably, though, before we could make good on any of our promises, we moved on.  I can only imagine the perspective of the village elders, having a steady supply of young Army captains visit them, promise them aid in exchange for their support, and then repeatedly failing to deliver.  Those Americans, they’re such teases…

Throughout the rest of my deployment, constantly on the move, always taking over for another unit, the issue of not having enough time to be fully trained in the intricacies of a particular area would repeatedly emerge as a problem. We'd receive fresh word of IED sites, only to discover that they'd already been previously identified.  There were locals in the rural political structure who were long identified as swindlers or con artists trying to get money for reconstruction projects that would end up swindling us all over again. Again, these sorts of mistakes weren’t just limited to my deployment. In the years to come, I had repeated confirmation from other soldiers that the same behavior was still occurring, five and even 10 years later; though 10 years later, the volume of missing information was that much more stark.  I often wonder what percentage of the war was fought for the first time, and what percentage was fought as a rerun.

At our fourth and final area of operations, a remote firebase in Oruzgan province, we were able to spend months really focusing on improving security in the area, and building relationships with the locals. We built Firebase Cobra and had good relations with the neighboring village. When we finally left in May of 2005, the area had seen a considerable degree of pacification. But when we left, the incoming command decided to shuffle the playing board and Firebase Cobra was left vacant except for a small cadre of Special Forces soldiers – not the sort of troop contingent that specialize in performing daily security patrols of the sort necessary to maintain local security. Not having soldiers at our base when we left quickly changed the security situation. We were still in Kandahar cleaning our gear, preparing to go home when word came across to us that our firebase had been attacked and that the Taliban was back. Just like that the months we had spent pacifying the area had been erased.  Soldiers in my unit had died to bring peace to that valley; a peace that no longer existed.

To provide another example, one only needs to look at the Korangal Valley.  In the 2010 documentary "Restrepo" Sebastian Junger documents the efforts of a regiment from the 173rd Combat Brigade to pacify what became known as “the valley of death.”  The fighting in the documentary is fierce, and at great loss of life and blood, the soldiers manage to keep the area from falling to Taliban control, building Firebase Restrepo on the side of a contested hill throughout the months of fighting.  The end credits report that shortly after the soldiers deployed home, the Pentagon deemed the Korangal Valley as no longer of strategic importance and pulled out all troops from the area. Which, like our Firebase Cobra, immediately fell back to the Taliban. Between 2006 and 2009, the Korangal Valley cost some 46 American lives with hundreds more injured; all for nothing.

This constantly changing strategy also bled U.S. coffers. In 2013, contractors finished work on Camp Leatherneck, a fully equipped $34 million U.S. military base, complete with a theater filled with state of the art electronics for presentations. Except that the new incoming command didn’t want it and so the base sat empty. The Afghan government was offered the base, free of charge, but said it would cost too much to maintain. The war is littered with these sorts of boondoggles, financial investments made by one command that were discontinued by the next.

Unfortunately, all of this was a routine feature of the war.  It seemed that every incoming general wanted to attempt a new strategy and imprint their own mark on Afghanistan. By nature, generals aren’t the type of guys that want to use the playbook of the guy who preceded them; they’re chasing bullet points in command evaluations.  In Afghanistan, the result was a strategy that changed year in and year out. The very nature of using forces for a single year before they’re swapped out forces a sort of lack of institutional memory, but adding a constantly changing strategy to what is already a fragmented effort, resulted in a war that could never decide on how it wanted to be conducted.

In history’s final summation, there will be many reasons we lost the war. A lot of the fault lies on the people of Afghanistan themselves. In Rajiv Chandrasekaran’s book "Little America: The War Within the War for Afghanistan," he writes about utility and infrastructure projects built by the Americans and then handed over to their Afghan counterparts – only to be sold for scrap parts and quickly become non-operational.

Even more of the fault lies with the Afghan government, which could never get the corruption under control. From rigged elections to government ministers on the take, to newly trained police that would immediately begin subjecting Afghan citizens to bribes, the government we have backed, the police we have trained, and the army we have fielded have been, by and large, corrupt and ineffective. And the Afghan people know it. (By comparison, I’ve read that the Taliban would often only ask for a single bribe when the crops came in; the Afghan police force is purportedly known to ask repeatedly for bribes until farmers can’t afford to pay any longer.  This is the government we forced on the Afghanistan people.)

But the fault also lies with consistently changing strategies over the course of the war.  Of course, it was like this because the United States never anticipated being in Afghanistan for 14 years.  Had the United States pledged, from the start, to being in Afghanistan for a decade and a half, perhaps some long-reaching strategy would have been developed.  But this doesn’t change the fact that the war was sidelined for many years while the Pentagon focused on Iraq, or that there should be some impetus for incoming commanders to focus on the stability provided by the continuation of long-term plans rather than chasing memoirs about their new strategy for winning the war.

In any case, knowing that I fought a war for nothing is humbling.  Kunduz will fall, and just you wait, other cities won’t be far behind.

John Rico, a veteran of Afghanistan, is the author of Blood Makes the Grass Grow Green, and can be reached at bloodmakesthegrassgreen@gmail.com.