The pope rebukes the GOP: The real story behind Boehner's departure and the right's assault on American values

On climate change, war and income inequality, Christian spirit says one thing and right-wing lawmakers another 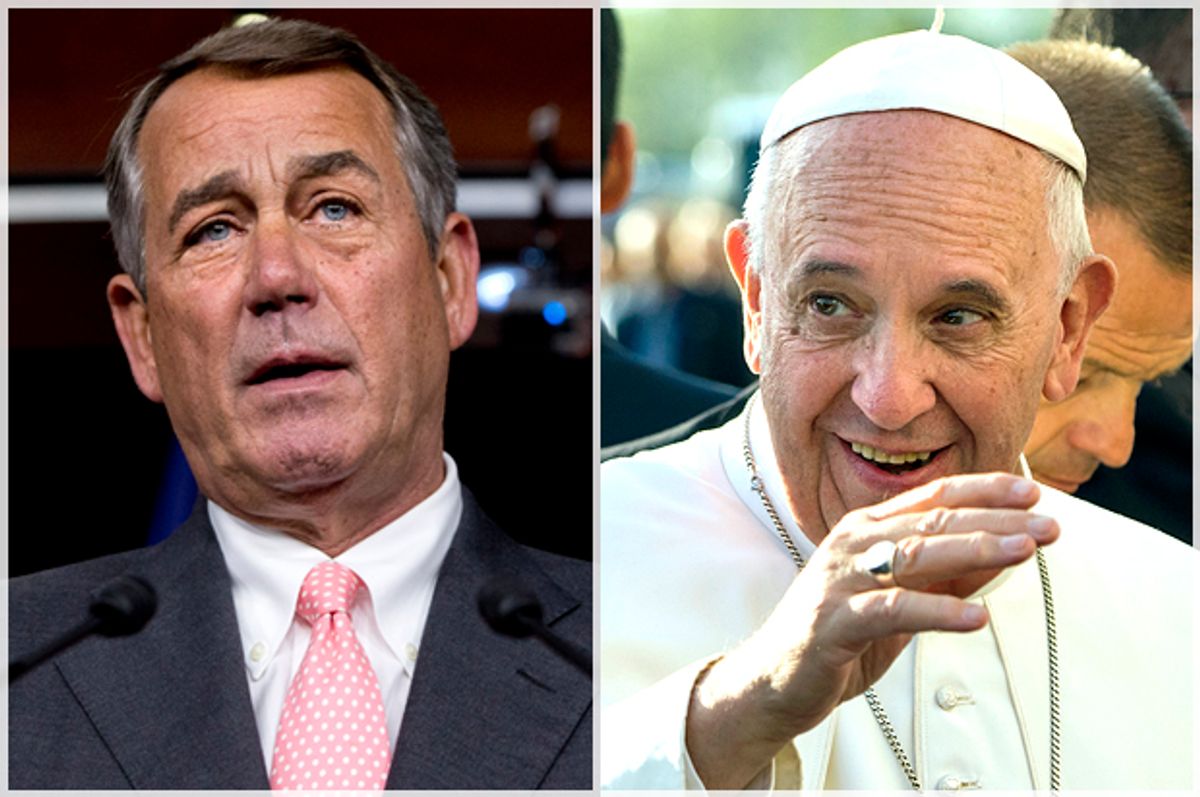 Whistling “zippity doo da” as he stepped into the briefing room, House Speaker John Boehner announced that he would be vacating his position as speaker, and also his seat in the House, at the end of October.

The announcement followed the papal visit to Washington, D.C., including a powerful address to Congress that had a particularly profound effect on Boehner. Of course, Boehner is known to be a sentimental guy—but what was written on the speaker’s face at various points of the pope’s address was absolute anguish. And indeed, in his press conference, Boehner acknowledged that his time with the pope had been revelatory and cathartic—to the point where he considered resigning that very night. But he prayed on it, slept on it, and woke up even more resolute that his stepping down was “the right thing, and for the right reasons.”

So it’s worth considering what would have motivated him, not only to vacate his post as speaker (which he claims he is doing for the good of the House), but to also so immediately resign his seat as a Republican representative from Ohio—and the implications for the Republican National Committee.

A Betrayal of Conservativism

It was not lost on anyone that while the pope’s message affirmed the Church’s commitment to preserving the integrity of marriage, resisting abortion and protecting religious liberty—on balance the papal address seemed to be a thorough rebuke of the contemporary Republican platform.

When Pope Francis released his encyclical addressing climate change, Catholic Republican presidential candidates suggested he should “leave science to the scientists”—the irony being that, in contrast with these lawmakers, the pontiff has a degree in chemistry, worked as a chemist, and is part of a long tradition of Jesuit scientists. And of course, even (perhaps especially) outside the Church, “the scientists” overwhelmingly agree with the pope and were ecstatic to see the Vatican embrace this issue.

In a further irony, environmental conservation has long been a cornerstone of the Republican Party. The National Parks system was established by Republican President Teddy Roosevelt; the Environmental Protection Agency was created by Republican President Richard Nixon. More broadly, conservatives have long held that it is a Christian duty to be good stewards of the Earth, which was entrusted to the care of mankind by God; protecting and respecting the environment was an integral component of their political identity.

But now, it is the Republicans who are trying to privatize public lands, shutter the EPA, and deny the reality or significance of climate change (or the extent of human contributions thereto). This has nothing to do with Christianity or conservativism and everything to do with the fact that the GOP is the preferred recipient of lobbying money from the fossil fuel industry.

The Holy Father also made it a point to highlight how lawmakers who define themselves as “pro-life” support retributivist conceptions of justice over those that seek to rehabilitate and redeem criminals, even to the point of overwhelmingly supporting the death penalty--in contrast not just with Pope Francis (and his predecessors, beginning with Pope Paul VI), but with most of the rest of the world.

These same politicians vehemently resist calls to restrict the proliferation of armaments, to include military-grade weaponry, because they are beholden to the NRA. They have rarely met a war they didn’t enthusiastically embrace: be it in Afghanistan, Pakistan, Iraq, Iran, Libya, Syria, Yemen or Ukraine, their proposed solution to any geopolitical challenge seems to be direct violence, violence by proxy, or the threat of violence. And although all of the aforementioned military interventions have been disasters, often spreading far more suffering than they ever stood to alleviate, the primary GOP critique of the current administration is that it should have intervened more forcefully and more often in the Middle East and around the world.

Finally, rather than seeking to empower and protect the most vulnerable in society, the tenor of the Republican Party has been increasingly suspicious or even contemptuous of the poor, minorities and immigrants. In short, Republicans have fetishized abortion, largely non-productively, and at the expense of appreciating the richness and fullness of what is entailed by being “pro-life” in the sense Jesus called us to.

Hence the papal warning that while it is important to resist foreign extremism and protect religious liberty, Christians must also resist fundamentalism themselves—be it religious, economic or political: institutions and ideologies that do not put the sanctity and welfare of persons ahead of any and every other objective are the very definition of evil. Indeed, conservativism was premised on the rejection of these abominations.

Nonetheless many GOP lawmakers and conservative pundits have decried the pontiff’s wading into politics—suggesting that Catholic Republicans are not bound by his views on poverty, climate change, immigration and the like.

Of course, this is ludicrous.

For one, the same crowd who are outraged that the pope would have the audacity to call for reforms to capitalism eagerly celebrated John Paul II’s denunciation of communism. Not to mention the fact that most of the Republican candidates are actively running on a platform of preserving or even expanding the role of religion in public life. So their view that the pope, of all people, should be secular--this is extremely perplexing.

Moreover, politics is ultimately about the distribution of societal capital; in turn, the social gospel espoused by Jesus and affirmed through the Church is about how to arrange society: it is intrinsically political. To say that the pope or his adherents should embrace the social gospel apolitically is an incoherent statement.

But more to the point, Pope Francis has not actually modified the teachings of the Church: the social gospel he espouses is entirely consistent with that of John Paul II, Benedict XVI and, of course, Jesus of Nazareth. The pope has not abrogated any Church doctrine, nor passed new doctrines, nor revised the Catechism of the Catholic Church (last updated in 1997).

If anything, the Holy Father has simply reshuffled Catholic priorities to better reflect those of Christ as related in the Gospels. In other words, contrary to the assertions of Marco Rubio, Jeb Bush et alia, Pope Francis’ social gospel is not revolutionary…and it is binding for Catholics regardless of their political persuasion.

The Wide Path, the Narrow Path

Of course, it is easy to embrace the Scriptures or the teachings of the Church when they confirm one’s preexisting commitments or condemn one’s adversaries. However, the true test of faith lies in whether or not believers are willing to submit to religious authority when doing so requires them to substantially revise, or even abandon, dearly held beliefs, practices and aspirations; or when following the Sprit comes at great personal risk or cost.

Through his stepping down, John Boehner has demonstrated that he is willing to make that commitment—at the very least, he will no longer be part of the problem. As for his Republican colleagues, it remains to be seen. But there are reasons for pessimism:

Prior to 2010, John Boehner was ranked as one of the most conservative members of Congress—and he played an indispensable role in orchestrating the GOP takeover of both Chambers. Yet when the speaker’s resignation was announced at the Value Voters Summit, rather than displaying any kind of sympathy for, or solidarity with, their fellow Christian Republican--the auditorium immediately erupted in wild celebration, with subsequent speakers (to include fellow Catholics Marco Rubio and Ted Cruz) taking potshots at Boehner for the rest of the evening.

All this suggests that the speaker’s caucus remains as committed as ever to their unrealistic maximalist brinkmanship. Boehner has labeled these as “false prophets” due to their toxic and hypocritical demagoguery--and he is absolutely right. But depending on who replaces him as speaker, the situation could grow a lot worse.

Even the “moderate” front-runner for the position, Kevin McCarthy, has been racing to the right in a scramble to maintain legitimacy in the wake of his devastating Benghazi gaffe and subsequent challenges from so-called conservatives.

God willing, other Republican lawmakers will rise up to steer the party, and the country, in a more productive direction. But I wouldn’t hold my breath.