It's come to this: Leading GOP candidates are suggesting it's cowardly not to throw oneself into a hail of bullets 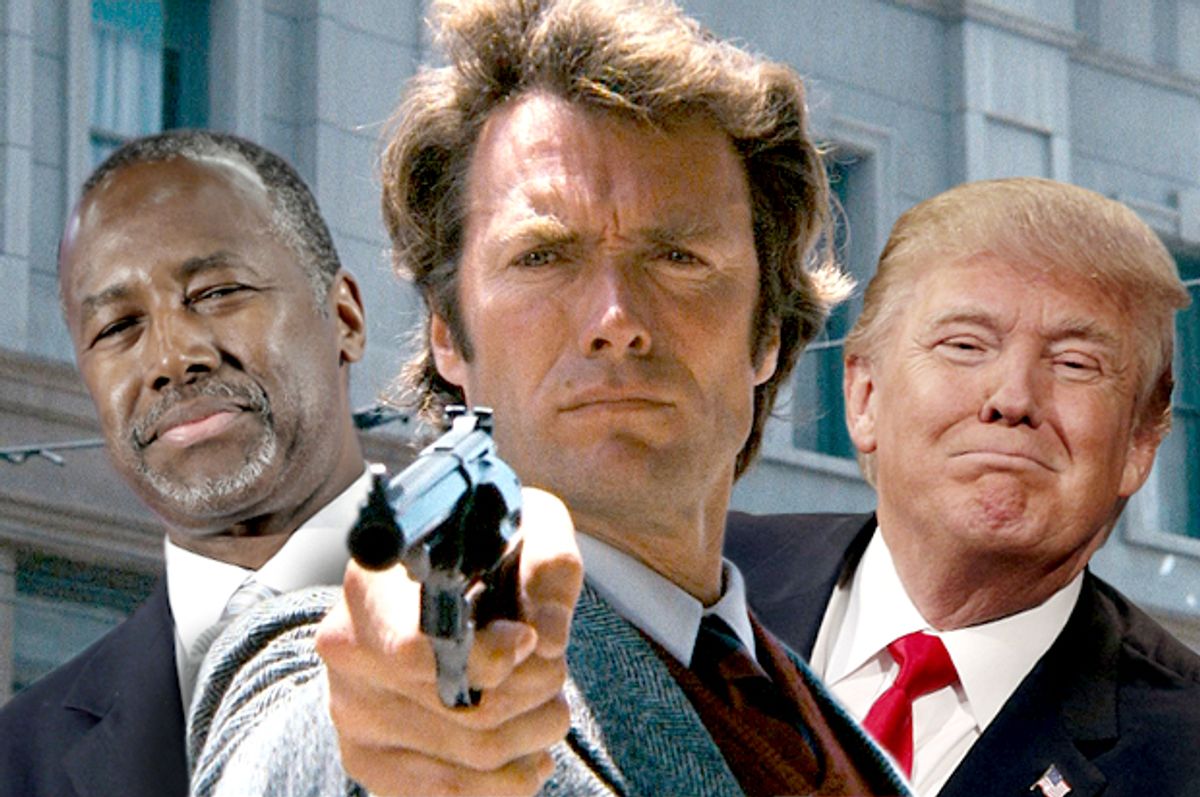 On the stump last week-end, Donald Trump entertained his followers in the wake of the massacre in Oregon with colorful fantasies of him walking down the street, pulling a gun on a would-be assailant and taking him out right there on the sidewalk. He said, "I have a license to carry in New York, can you believe that? Somebody attacks me, they're gonna be shocked," at which point he mimes a quick draw:

As the crowd applauds and cheers, he goes on to say "somebody attacks me, oh they're gonna be shocked. Can you imagine? Somebody says, oh there's Trump, he's easy pickins..." And then he pantomimes the quick draw again:

Everybody laughs. And then Trump talks about an old Charles Bronson vigilante movie and they all chanted the name "Death Wish" together. Keep in mind that this sophomoric nonsense took place just two days after a disturbed man went into a classroom and shot 17 people.

Now Trump is a clown, we know that -- a very wealthy celebrity clown who has captured the imagination of millions of people. And if there's one thing he's known for, it's his macho swagger so this isn't exactly a shock coming from him.  Indeed his entire rap is based on the idea that American leaders are all a bunch of "babies" (although one cannot help but think he has some other words in mind) while he is the manly leader who will take on all the "bad people" including world leaders, ISIS and anyone else who stands in the way of making America great again. It wouldn't surprise me to see Trump literally packing head at his next rally and shooting into the air like Yosemite Sam.

But who could have guessed that his closest rival, the sober, quiet, respectable neurosurgeon Ben Carson would hold the same delusions of masculine grandeur:

Ben Carson, the Republican presidential candidate, said on Tuesday that victims of mass shootings should not be timid during attacks, imagining that if he were facing a raging gunman, “I would not just stand there and let him shoot me.”

The remarks on Fox News came a week after a gunman entered a community college classroom in Oregon and opened fire on students after asking them about their religion. Mr. Carson said that he would defend his faith at any cost and that if he had been in that classroom he would not have cooperated.

“I would say: ‘Hey, guys, everybody attack him! He may shoot me, but he can’t get us all,'” Mr. Carson, a conservative who has been rising in recent polls, said.

That's very impressive. I'm sure Carson had a lot to teach the victims about how they should have behaved more bravely in the face of an armed madman bent on killing them.   One of them, a veteran who tried to keep the shooter out of the room, did live, so perhaps Carson can tell him all about what he did wrong when he's out of the hospital.  As for defending his faith at any cost and committing suicide rather than cooperate, well let's just say that makes him someone who has more in common with Islamic fundamentalists than he might be comfortable with.

One thing is clear.  While Trump and Carson may have personalities that are polar opposites in terms of temperament, they do have a couple of important things in common (besides crackpot politics).  They are both outrageously arrogant and they both see themselves as Hollywood-style heroes. This notion they are personally so tough that if anyone threatened them with a gun, they'd either out-draw them or inspire everyone to run straight into a hail of bullets, is ludicrous. Neither of these men are trained military veterans or have any professional experience with firearms -- except in their own Walter Mitty fantasies. These comments are embarrassing for both of them.

But it does speak to a larger issue about how the right proposes to deal with gun violence, personal danger and the fear that permeates our society due to the flood of deadly weapons landing in the hands of people with an ax to grind who want to go out in a blaze of glory and take a bunch of people with them. Isn't that the dark side of Trump and Carson's inane self-serving illusions about their own theoretical heroism? Doesn't  Wayne LaPierre's formulation that "the only thing that will stop a bad guy with a gun is a good guy with a gun" sound like old fashioned cowboy serial dialog that ignores the indiscriminate carnage that inevitably results when bullets start flying from guns that don't know what kind of "guys" are firing them? (In case you were wondering, the rare incidents most often cited as proof that this works turn out to be full of holes -- no pun intended.)

In fact, the High Noon scenario is not confined to vacuous right wing "solutions" to mass shootings. It defines the right's philosophy on gun rights in other ways that are changing the way we think about the law and our moral responsibilities. The most obvious example is the recent legal concept of "stand your ground" -- the legal doctrine which replaced the self-defense element of "duty to retreat" that had been part of common law definitions of self-defense for centuries. Civilized societies had long required that if a person had the ability to elude a deadly confrontation rather than engage in one, he had to take that option. Using deadly force must always be a last resort.  The basic idea was based upon the common sense observation that if more people backed down, retreated or stepped aside, fewer people would be killed.

With stand your ground, there is no obligation to try to spare lives in a potentially deadly situation and a person is considered to be justified in killing someone solely if there is a perceived threat. The consequences of this are severe; an investigation by the American Bar Association found that homicide rates had risen in states which had enacted Stand Your Ground laws.

These laws are in addition to an older legal exception to the duty to retreat called Castle Doctrine, which holds that a person had no duty to retreat if someone enters their home. Tellingly, this legal concept has recently earned the nickname "Make My Day" laws, after the Clint Eastwood's "Dirty Harry" character's tag line. The proliferation of these laws, at a time when more and more people are armed is resulting in tragedies like these all over the country:

A Colorado Springs father fatally shot his teenage step-daughter Monday, saying he thought she was a burglar. Prior to the incident, police received a call about a burglary in progress. But when they got there, they found the 14-year-old with a gunshot wound. She was taken to the hospital and died soon after, according to CBS Denver. The incident is the latest tragedy involving the use of deadly force to protect the home. And it is one of several incidents in which a parent has killed their own child after they mistook them for a burglar.

Last September a Connecticut teacher shot and killed his 15-year-old son after his neighbor called to say she thought she saw a robber in the front yard. Just a few weeks after that, a retired Chicago police officer shot and killed his 48-year-old son after he came in the back door late one night. And an off-duty police officer killed his son last July while the two were on vacation in upstate New York, after he told police he believed him to be an intruder.

Those are just a few of the gun "accidents" that are happening all over this country every day due to people believing that it's reasonable to shoot first and ask questions later. They see themselves as heroes like Clint Eastwood and Charles Bronson protecting themselves and society at large from violent predators. In fact, Dirty Harry and Bronson's vigilante were criminals.

The law evolved over a very long period to account for such vain and arrogant features of human nature. The duty to retreat was developed so that self-defense was not used as an excuse to go looking for trouble. Castle doctrine was an exception that may have made sense before millions of Americans started arming themselves to the teeth. This idea of a society being patrolled by millions of "good guys with guns" is already getting a lot of innocent people killed. If they have their way and encourage even more loaded guns in public places the body count is only going to go up.