As a white parent, I solemnly swear to never do this

These awful white parent rap parody videos have got to stop 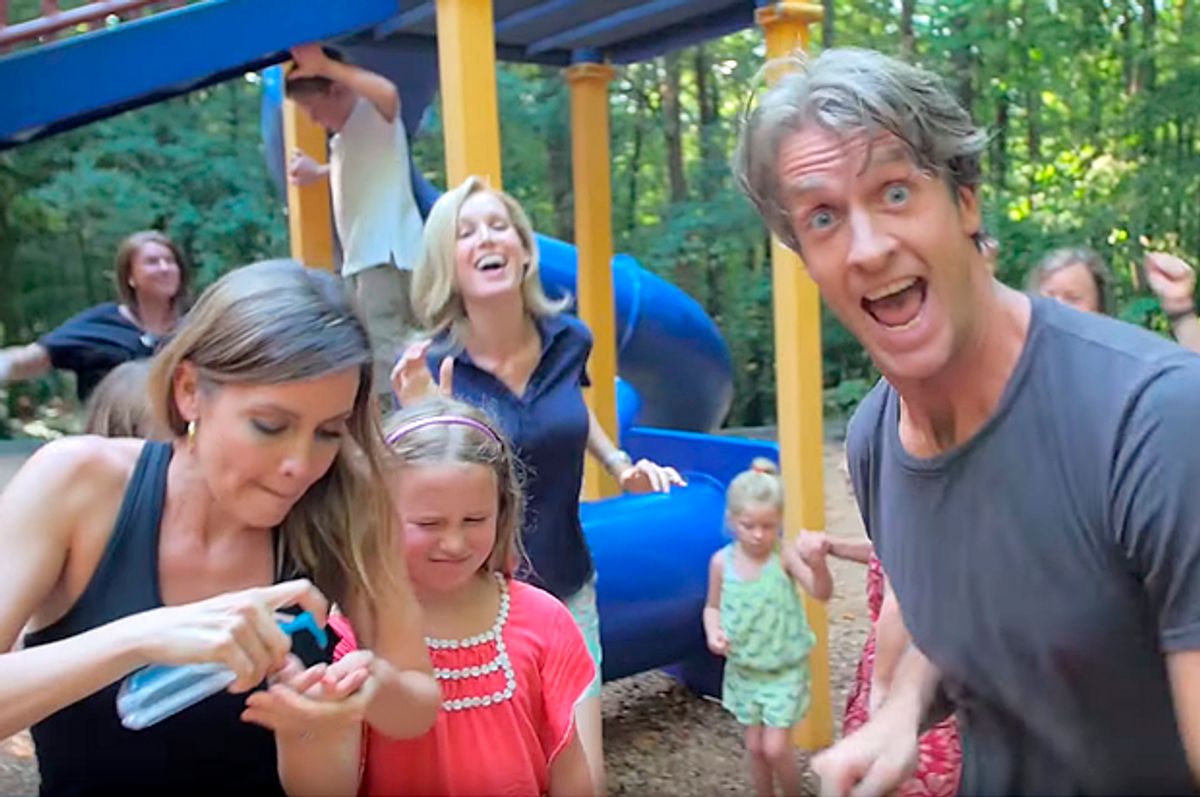 Here's how you make a video go viral on social media: Take an attractive, nonthreatening white couple, throw in a couple of darling (white) kids, and have them all crowd the camera and sing about potty-training and kissing "boo-boos," gangsta-rap style.

You know the Holderness family -- Dad Penn, mom Kim, and their two kids -- whose latest video parody (a satirical take on helicopter parenting set to LMFAO's "Party Anthem") probably saturated your Facebook feed. Penn and Kim Holderness have built a virtual empire making parodies of popular hip-hop and gangsta rap songs -- notably, a Halloween parody to the tune of Snoop Dogg's "Gin and Juice" and "Baby Got Class," a popular back-to-school parody set to (what else?) Sir Mix-a-Lot's "Baby Got Back."

But the Holderness family is just the latest to jump on the bandwagon. Since becoming a parent, I've witnessed this trend take hold of American pop culture and explode in popularity. In 2010, Toyota released a commercial for the Sienna minivan -- a model they nicknamed the "swagger wagon." The commercial features a set of white parents and their two children, rapping and rhyming about parenting experiences like "riding hard" in a minivan and "straight owning bake sales." The video was a viral hit, racking up over thirteen million views as of September 2015. Since 2010, the trend has grown quickly: From national ads like Toyota's to a Mother's Day tribute endorsed by a local church, these videos are legion. Even the low-budget parodies (to say nothing of the national ad campaigns) are wildly popular, with hundreds of thousands (and sometimes even millions) of page views each.

While not all of it is my cup of tea, I'm generally a big fan of rap and hip-hop — artists like Tupac Shakur, Twista, and Kanye West monopolize my Spotify playlists. Their beats are infectious and these artists have true lyrical mastery. Rap songs are often full of obscenities, and that makes them ripe for parody: Parodists can enjoy the catchy tune without hearing any "problematic" lyrics. (And I get the appeal of that, I do. I love Tech N9ne, but I can't really listen to him in front of my two-year-old when he's calling me a "punk motherfucker.")

But as a white woman, it would be tone-deaf of me to assume that there's nothing problematic about me taking a black person's lived experience and making it cutesy and palatable for a mostly-white audience. Snoop Dogg's "Gin and Juice" isn't about Trick or Treating with his family; the song is about Snoop's teen days in Long Beach, which belong to him -- warts and all. De-contextualizing his music and obscuring the history behind it is a form of erasure and, let's be honest here, a form of racism. Similarly, adopting the mannerisms, dress, and slang of black artists, like the white rappers in popular YouTube parenting raps -- that's racism as well. It's little better than contemporary blackface.

It might seem like a stretch to compare something that's meant to be clean fun to something as insidious as blackface. But surprisingly, a lot of the same elements of blackface performance are actually at play in videos like "I'm a Mom," "Parent Rap," "Dad Life," and the ever-popular "#Xmas Jammies" that went ridiculously viral at the end of 2013. According to Eric Lott, author of "Love and Theft: Blackface Minstrelsy and the American Working Class," blackface is defined as a practice in which white people "caricature blacks for sport and profit." In all of these videos, white people not only imitate black vernacular (using phrases like "errday," "hizzle," "stone cold player," and "you best get ready,") but they also borrow mannerisms typically seen in gangsta rap videos (the exaggerated hand gestures, the close proximity to the camera, and addressing the audience directly, among other things). Rap has, for decades, been an avenue for black expression and social reform: Artists such as N.W.A. and Wu-Tang Clan have used the same posturing to convey their anger at poverty, street violence, police brutality. White rap parodies negate that, "borrowing" aspects of black culture, contrasting it with their whiteness to garner cheap laughs, and, in the case of the Holderness family, building a virtual empire off the ensuing attention. Talk about sport and profit.

In a blog post for tolerance.org, Dr. Neal A. Lester discusses blackface as a way for white people to "cut loose" and break free from the structure and order of whiteness. In the 2012 Toyota Sienna "Swagger Wagon" ad, Lester notes, the white performers alternate between their aggressive "thug" persona and their responsible "white" persona. At one point, the father figure breaks character: "No, seriously, honey," he asks. "Where are the kids?" You see this over and over again in these videos -- white people lapsing out of their "black" personas to change a diaper, answer a kid's question, or take their toddler to the bathroom. White parenting is attentive, watchful. It's only when they lapse back into their black personas that the kids are forgotten and they're back to mugging at the camera again. In the "Parent Rap," one white performer informs the audience that he "still knows how to rock the hizzle." Confused, his counterpoint, the white suburban mom, wrinkles her nose at him adorably: "I don't even know what you just said." Get it? White people are educated and speak respectable English.

White people (shamefully, myself included) tend to shut down or get defensive when they hear the word "racist": That video isn't racist. It's just clean fun. It's about parenting, not race. I doubt these performers were trying to make any racially-charged statements, and these videos were clearly not intended to be malicious. The parodies are about parenting, and the idea is supposed to be that rap is "cool" and "anti-authoritarian" and "edgy" and parents are the exact opposite of those things -- authority personified. That's the joke. Right?

But racism is more than merely blackface, and it exists on a structural, and not just interpersonal, level. Racism is a hierarchical system that privileges white people at the expense of people of color. And this is exactly what these rap parodies do. With the exception of "Dad Life," viewers will notice that there aren't any actual black people in these videos -- ever. So these parodies strike me as less about the universality of parenting and more about manufacturing a world where white people are doting parental figures and black people are either "thug" or absent entirely. Love them or hate them, it's time to admit: They're racist.

White parents: Stop making these videos. Stop watching them. Stop sharing. It's time us to do our part and to make this trend -- like the once-acclaimed minstrel shows of the 19th and 20th centuries -- disappear. For good.