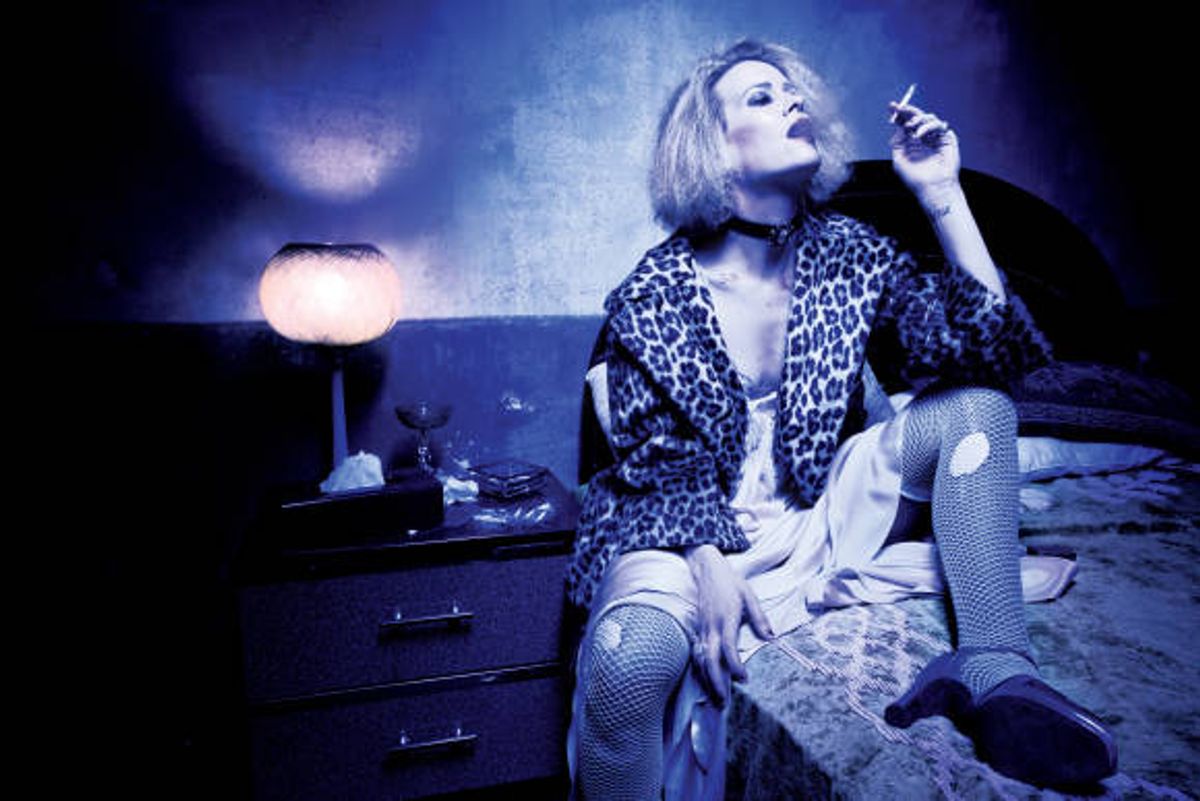 There was a time where TV showrunner Ryan Murphy was the embodiment of the future of television. After niche success with both “Nip/Tuck” and “Popular,” Murphy hit the jackpot with his high-school musical/soap “Glee,” a dark, snarky, a capella take on what is otherwise the oldest dramatic setup in the book. The show had something other programs didn’t: Acerbic humor, a teenage audience, and the built-in cash machine of tie-in album sales. Murphy and collaborator Brad Falchuk followed this up with “American Horror Story,” on FX; the first anthology miniseries of the current mini-trend that has included “True Detective” and “Fargo.” Where “Glee” was the teeny-bopping radio edit, “American Horror Story” was packed end to end with innuendo, subtext, and grande dame actresses, like Jessica Lange, Kathy Bates, and Frances Conroy.

With those two programs, Murphy established a mini-empire of television development. Murphy and Ali Adler went on to develop the NBC sitcom “The New Normal” (now cancelled); this fall, Murphy, Falchuk and Ian Brennan collaborated on Fox’s freshman drama “Scream Queens.” Murphy and Falchuk are also executive producers on a spinoff of “American Horror Story,” creatively titled “American Crime Story,” that will premiere on FX next February.

And I am here to tell you that Ryan Murphy must be stopped.

This week, the third episode of “Scream Queens” and the premiere of “American Horror Story: Hotel” aired, on Tuesday and Wednesday nights, respectively. Both are barely watchable. “Scream Queens” is bloated, scattered, and a bit too satisfied with its own cleverness. “American Horror Story,” always ambitious, has prioritized style over its substance even more than usual with “Hotel,” creating an episode that is largely a collection of disjointed music videos.

But that’s all fine; sometimes, shows are just bad. What is afflicting “Scream Queens” and “American Horror Story: Hotel” is much worse; it’s the same unpleasant shock-and-awe storytelling of attrition that populated the later seasons of “Glee.” Murphy’s method of grabbing the audience is either caustic, “ironic” humor or horrifically awful sexualized violence. And it appears that each time you deploy a shock missile, your next one has to be twice as shocking. The result is a body of work that exploits as a prop and then quickly disposes of any number of actual social ills and real issues of oppression: rape, racism, homophobia, disability, eating disorders, murder. It’s possible to make art out of narratives of violence, offense, and horror. I am really not sure if art is what we’re watching, though.

Let’s look at a few recent examples from just this fall. Last night’s premiere of “American Horror Story: Hotel” was a much-heralded one; Lady Gaga has joined the cast as a blood-sucking, sex-murdering countess, attended to by Matt Bomer. “American Horror Story” has routinely had an incredible cast and outsize ambition; its storytelling through “Murder House,” “Asylum,” and “Coven” was driven by following subtext and innuendo all the way back to its logical endpoints. The conceit of “Hotel” is that a hotel in Los Angeles—this one—is like Hotel California; it gets its hooks in you, and you can’t escape until you’re a smear of blood. There’s almost zero setup to this point, save for two young foreigners who are quickly ensnared, but we’re on our fifth series; we know the drill at this point.

Gaga’s scene with Bomer in last night’s premiere is indicative of the lush, high-drama gore-fantasy that has made the show so compelling—the two lure a couple back to the hotel for group sex, and then simultaneously murder both, mid-coitus. It’s horrific, but I take a stab at explaining why it happened: The Countess and her minion are the two evil vampire succubi who run this place, and it’s useful to know their modus operandi. The heightened commingling of blood and sex, especially as an act of mutual satisfaction, is pretty damn provocative—but there is some pin securing it to the rest of the narrative.

I cannot say the same for a small interlude featuring Max Greenfield as a Hollywood addict who holes up in the titular hotel to shoot heroin only to be suddenly and viciously raped by a faceless man-creature. It is not implied or suggested, it happens; we see Greenfield flipped over on the bed and then the creature pulling down his pants, exposing one of many finely shaped buttocks “American Horror Story” offers over the course of the hour. Greenfield’s character screams and screams and screams; he is raped to death. It is a violent, unending scene. And I have no idea why it’s in the episode. Greenfield’s presence isn’t explained; the faceless creature, seemingly covered in scar tissue, disappears back to wherever he came from.

Even more grotesque, if that is possible, is a murder scene that a detective played by Wes Bentley arrives to investigate. It is a man and a woman frozen during intercourse. A spear has pinned the woman, through the chest, to the headboard; another two spikes have nailed her hands to it. Underneath her, a man is mumbling in agony; his eyes and tongue have been removed and placed in a nearby ashtray. As the detectives investigate, they realize that the man’s penis is still erect and inside the dead woman; he has been given a Viagra-like drug to keep him aroused.

Here is the thing: There is a reason why this scene exists in the plot. But the amount of care that went into constructing this tableau of horror far outstrips the amount of care that went into explaining why this tableau is in the story. The plot is muddy; the characters, introduced in quick succession. It’s not just that this is exploitative, or that this is bad writing; it’s that bad writing makes room for exploitation and violence to dominate all the available space of a story, because that’s all the viewers see.

In “Glee,” this type of exploitation tended more on the side of after-school special than blood-spattering horror, but the unique relationship between poor writing and poor representation was the same. The tone of the show veered wildly between sharp performance-arts drama and treacly after-school special; the character of Will Schuester (Matthew Morrison) was forced into the roles of henpecked husband, expectant father, lovesick Romeo, super-creepy Casanova, and Spanish teacher, with increasingly less logic. Schuester was briefly romantically linked with every woman who walked through the doors of William McKinley High School—including Kristen Chenowith, Gwyneth Paltrow, and Coach Beiste (Dot-Marie Jones), who herself was the subject of every stunt-story in the soap opera repertoire, including having never been kissed, an abusive boyfriend, and gender reassignment. And that doesn’t even touch the nadir of “Glee”’s shock and awe, the 2013 episode “Shooting Star,” an incoherent hour of exploitative schlock that used the very real problem of school shooting and the very real disability of Down syndrome to manufacture a plot that insulted the intelligence of literally anyone and everyone on the planet.

It’s a little odd that Murphy’s biggest shows are “Glee” and “American Horror Story,” but “Scream Queens,” which borrows from both (like the unholy spawn it is) alights on what the two have in common. Murphy trades off of the frisson of the forbidden in his shows, and high school, like a murder house, has both rigid social structures and seemingly life-or-death stakes. (Bonus points are granted if the world is populated by both women who call themselves bitches and men in elaborate costuming.)

And because “Scream Queens” is the embodiment of so many of Murphy’s unfiltered interests, it reveals what is just so frustrating about this type of humor and provocation. From the get-go, the show has operated under the assumption that if it delivers racism, fat-shaming, or gendered epithets, it’s earned it; because those pronouncements have a veneer of irony or wit, they don’t “count.” Chanel Oberlin (Emma Roberts), the protagonist (such as it is) of “Scream Queens,” has an eating disorder she wears like a badge of pride, as she calls other women “fatties” or “sows.” In the pilot, she referred to the house’s maid as “white Mammy,” “because she’s essentially a house slave.”

Chanel is supposed to be laughable, and most of the time, she is laughable. She is “Scream Queens”’ villain as much as she is its protagonist; she’s an intolerable “bitch” who rules with a gloved fist of entitlement, in-fighting, and high-strung demands. In the opener to “Haunted House,” this past Tuesday, she surprises her Instagram followers with gifts to celebrate “Chanel-O-Ween.” One of the gifts is a box full of blood; another is a dismembered foot; a third is a razor in an apple. In the credits, the Instagram fans are credited as “Frumpy Girls.” There is an element of humor there, yes—an awareness, anyway, of the dismissal of “boring” or “ugly” girls, while they are actually also dismissed from the show’s focus. And just in case we weren’t paying attention, there’s Lea Michele seducing a man by offering up anal sex with the line: “So, are you man enough to attack my crack?”

It can be enticing, for some amount of time. It’s exhausting in the long run. Murphy’s lobbing grenades every few minutes, in all of his shows, and explosiveness comes with a price. Because the thing is, the semblance of irony—the posture of it, really—does not absolve a writer from the responsibility of introducing what is nothing but carefully coded hate-speech. The audience will still feel that for what it is. Just as the semblance of “art”—the posture of aesthetics—doesn’t give a creator a free pass for endless violence. Because that is still screaming, crying, face-clawing violence, and the audience will feel that for what it is, too. This is a language of pain and violence, and even if it’s not real on the screen, they resonate with an audience who really suffers from violence and racism and fat-shaming and disability. It often seems like Murphy and his team—who are about to be behind more TV shows than ever—forget that behind these jarring, titillating tropes are the lived realities of their vast, multidimensional audience.