"Three hours away from being executed and he’s putting his sundae away for tomorrow. There was no tomorrow" 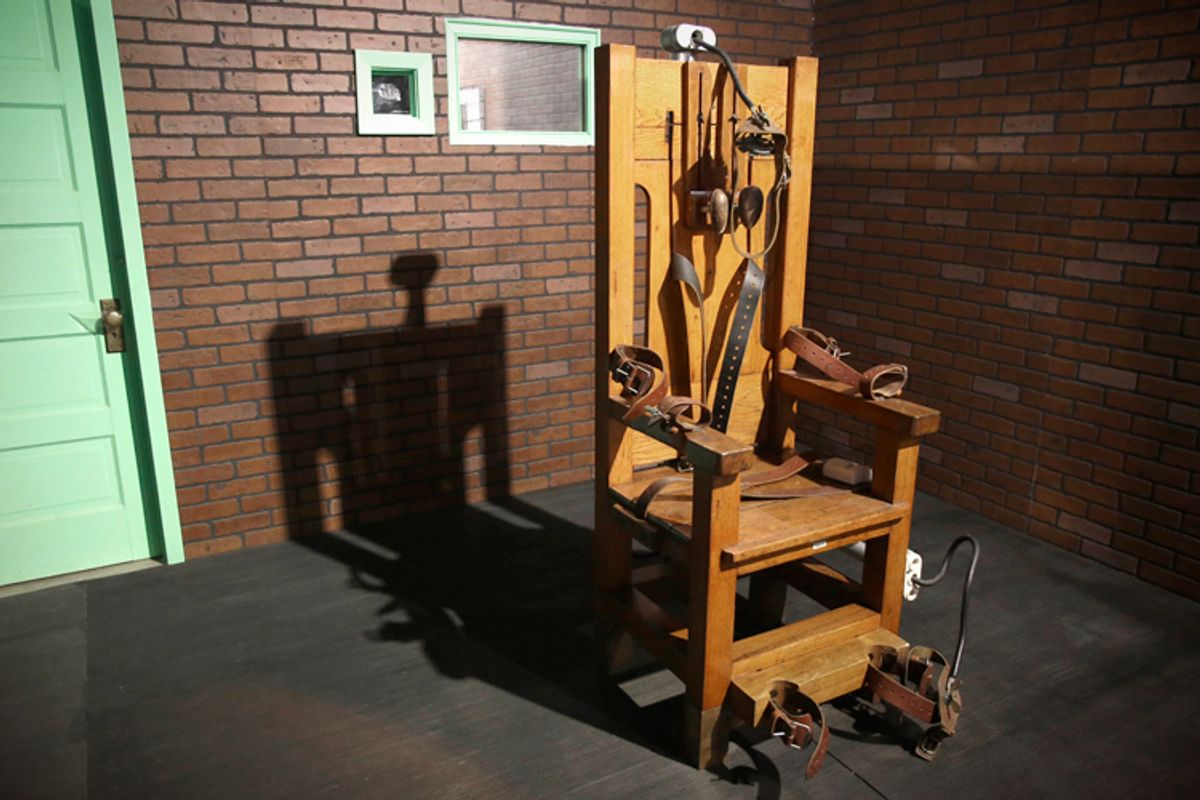 They say you can’t put a price on life, but what about death? Earlier this year I spoke to Jerry Givens, a former state executioner turned death penalty abolitionist. He told me that for people who carry out the death penalty, the real, enduring cost is emotional.

“If I had known what I’d have to go through as an executioner, I wouldn’t have done it. It took a lot out of me to do it. You can’t tell me I can take the life of people and go home and be normal.”

Givens executed 62 people during his 17 years working for Virginia’s Department of Corrections, and like many executioners, he felt the consequences long after the act itself. It was clear from speaking with Givens that he couldn’t shake the lasting weight of his actions, and he’s certainly not alone: a startling 31 percent of prison staff who perform executions will suffer from post-traumatic stress. Flashbacks, nightmares and other symptoms of PTSD are habitually seen among correctional officers and executioners, according to the National Coalition to Abolish the Death Penalty.

It isn’t just the prison staff who suffer. California Gov. Edmund Brown had the unenviable task of deciding whether to commute death sentences to life without parole -- absolute judgments over life and death that continued to haunt him through his later years:

“The longer I live, the larger loom those decisions I had to make as governor. Looking back over their names and files now, I realize that each decision took something out of me that nothing – not family or work or hope for the future – has ever been able to replace.”

So what was it that Brown lost in the process? Steve Martin, a former execution witness for the Texas Department of Corrections, believes it’s nothing less than his humanity: “We do these things we’d never normally be involved in because they’re sanctioned by the government,” he explained. “And then we start walking through them in a mechanical fashion. We become detached. We lose our humanity.”

It’s estimated that around 10 percent of death row inmates suffer from a severe mental illness; recently these statistics have again raised some of the moral dilemmas surrounding capital punishment. According to legal briefs raised in court this year, the very nature of executing someone who lacks the capacity to fully comprehend their actions “offends humanity”. American law asserts that it is illegal to execute the insane – but what constitutes ‘insanity’ is up to each state to decide.

In Texas, where more than 20 percent of death row inmates are mentally ill, attorneys for convict Scott Panetti are currently fighting to commute his death sentence to life without parole. Before he shot and killed his in-laws in 1992, Panetti had been hospitalized countless times for schizophrenia, hallucinations and manic depression. Evidence shows Panetti believed he’d been at war with Satan since 1986 and, imagining the devil had possessed his home, he buried his furniture in the backyard.

Yet, somehow – and most bizarrely – Panetti was allowed to represent himself at trial. He dressed up as a cartoon cowboy and, wildly incoherent, attempted to call the pope, Jesus Christ and John F. Kennedy as his witnesses. If Panetti is executed, he will be killed believing that the gold filling in his mouth is a covert listening device that transmits his thoughts to prison staff; that actress Selena Gomez is his daughter; and that his death is really just the state’s way of preventing him from preaching the gospel.

Somewhat surprisingly, a group of conservative leaders took up the case for Panetti’s death sentence to be commuted. In their letter to the court, the group stated that “the authority to take a man’s life is the most draconian penalty that we allow our government to exercise…. such an extraordinary sanction [should] not be used against a person mentally incapable of rational thought. It would be immoral for the government to take this man’s life.”

“Immoral” and “offending to humanity” it may be, but cases like Panetti’s are not rare. Individual states decide what constitutes "insanity," allowing judges to make inexplicable statements such as “[offender] is clearly ‘crazy’ but he is also ‘sane’ under Texas law.” Just this year Georgia executed decorated Vietnam veteran Andrew Brannan, a man who had been diagnosed with severe mental illness prior to his crime; in March, Missouri executed Cecil Clayton, a man missing 20 percent of his frontal lobe. These dubious death sentences are not at all a scarcity within the justice system, as Givens can recall himself:

“This one guy, he was sort of moderately retarded. He’d ordered a chocolate nut sundae for his last meal. But he couldn’t swallow it. So he said to me, ‘I can’t finish it so I’ll put it in the fridge for tomorrow.’ Here he is, three hours away for being executed and he’s thinking about putting his sundae away for tomorrow. But there was no tomorrow for him. He hadn’t realized this was his last day.”

The debate about the humanity of capital punishment, or lack thereof, was further brought to the forefront with the botched executions of Clayton Lockett and Joseph Wood last year. Lockett’s miscalculated execution in Oklahoma was blood-spattered and harrowing, with witnesses conveying their anguish at what they saw inside the death chamber. In Arizona, Wood took two excruciating hours to die on the gurney, gasping and choking as horrified witnesses looked on – but this, according to Arizona Governor Jan Brewer, is inconsequential.

“Wood died in a lawful manner and by eyewitness accounts he did not suffer,” she stated. “This is in stark comparison to the gruesome, vicious suffering that he inflicted on his two victims.”

The argument that a convict’s crime was so heinous that it negates their execution is unsettling. While Brewer seems to ignore the protracted, torturous way Wood was killed, my argument is that her comparison fails. Why? Because she looked to a double murderer for justification. Wood’s death may well appear befitting in light of his own terrible crime, but why use the actions of a convicted killer to determine the baseline of what’s morally acceptable?

Further, if an offender will never learn any lessons from it, how can capital punishment generate anything other than an erroneous sense of reparation, and an ugly expression of our most base thirst for revenge? Most advocates of the death penalty publicly deny the idea that it’s about revenge, but District Attorney Dale Cox – the man responsible for issuing one third of Louisiana death sentences since 2011 – doesn’t:

“I’m a believer that the death penalty serves society’s interest in revenge. I know it’s a hard word to say and people run from it, but I don’t because I think there is a very strong societal interest. I think we need to kill more people.”

The urge to wreak revenge is surely understandable when someone has lost a loved one. But when the facts tell us that the death penalty is not a deterrent and costs the taxpayer ten times more than life without parole, is this instinct something we want our society to actively sanction and encourage? It is difficult to truly understand, let alone morally respect, a society in which we are genuinely comforted by human pain and vengeful cruelty.

“It is revenge,” Givens agrees. “Death is going to occur anyway, but we’re so impatient we have to execute someone. That’s the mentality people have. It doesn’t add up, because when you’re using killing for killing, we’ll continue to have killings.”

The Definition of Humanity

The justice system is riddled with inaccuracy and by the rule of human error, this will not change. The awareness of judicial incompetence is felt keenly by Givens:

America should be wary of the company she keeps. One of only nine nations that still regularly executes its citizens, the U.S. comes fifth in a list of countries that include Iraq, Iran, Saudi Arabia and North Korea. Throughout history there are many examples of violent human practices that have been consigned to the ash heap of history. The death penalty should go this way too. It panders to our visceral animal instincts, legitimizes a dehumanizing instinct for ruthless revenge, and only creates more grief-stricken families.

Among rational and intelligent human beings, there are certain ethical codes that apply to us all. The presumption that we should not murder another human being, mentally ill or otherwise, is one such code. Regardless of what another person has done, irrespective of how terribly they may have abandoned that same code of ethics, why should we abandon our own in return?

The execution witness Steve Martin said it best when he remarked, “We become detached. We lose our humanity." Because it’s the ability to think, and more important, the ability to empathize, that defines our very humanity. Every time this is ignored, every time a death warrant is signed and a needle is drawn, another light dims for humankind.

It’s not about feeling sorry for Clayton Lockett. Or Joseph Wood. Or for any other victim of capital punishment. It’s about doing what they were incapable of – thinking logically, showing empathy in even the most difficult circumstances, and demonstrating compassion for someone at your mercy.

When a criminal bypasses our ethical codes they lose their freedom, and rightly so. But to lose their life? Who does it benefit? It cannot be justified, because the price of the death penalty is just too high if it costs us our humanity.