Did the Holocaust happen because Hitler loved gun control? No, but Ben Carson won't take "no" for an answer 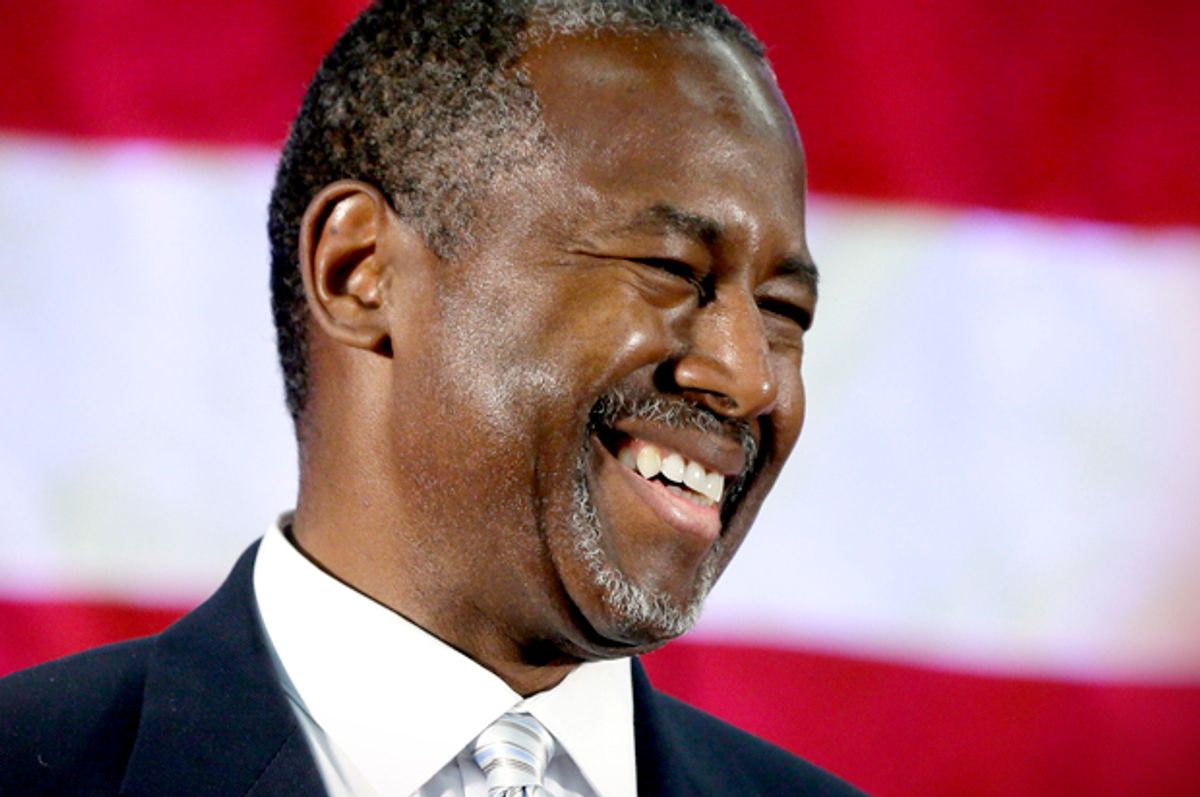 Ben Carson will not stop talking about Hitler. Pretty much everyone in the political world – including his own campaign manager – wants him to shut up about the Nazis and focus on the non-Hitler parts of his campaign platform, but Carson is a man obsessed. He dropped by CNN yesterday and tried explaining to Wolf Blizter that the Holocaust might not have happened had someone with a gun stood up to Adolf Hitler. “I think the likelihood of Hitler being able to accomplish his goals would have been greatly diminished if the people had been armed,” Carson said.

This was an elaboration of an argument Carson laid out in his new book, "A More Perfect Union":

German citizens were disarmed by their government in the late 1930s, and by the mid-1940s Hitler's regime had mercilessly slaughtered six million Jews and numerous others whom they considered inferior... Through a combination of removing guns and disseminating deceitful propaganda, the Nazis were able to carry out their evil intentions with relatively little resistance.

You should read Huffington Post editor Nick Baumann’s response to Carson’s remarks to understand why this is so crazy and offensive. There actually was some organized armed resistance to the Nazis, like the 1943 Warsaw ghetto uprising, which was crushed by the well-armed and well-trained forces of the Third Reich. You should also read Salon veteran Alex Seitz-Wald’s piece debunking the popular right-wing myth upon which Carson’s argument is based – the Nazis actually loosened gun restrictions (on non-Jews).

The whole notion of an armed German citizenry halting the Nazi rise to power is specious at best. Hitler came to power through a combination of popular appeal and illegal violence, and he maintained his authority in part by brutally repressing the slightest hints of dissent. He actually solidified control by propagandizing violence against the state as evidence of Bolshevik and Jewish conspiracies against the German people. If there was one thing the Nazis knew how to do, it was using violence to their advantage. And the fact of the matter is that it took the armies of several nations over half a decade to dislodge Hitler and the Nazis from their positions of power. We’re supposed to believe that a German citizenry that either supported or was terrified of the Nazis could have thwarted Hitler and his fanatical, militarized regime with pistols and hunting rifles?

But Carson insists that he is in the right, to the point that he’s dismissing the Anti-Defamation League’s condemnation of his remarks as “total foolishness.” He keeps returning to the Hitler example because he thinks it provides a powerful cautionary tale that bolsters the increasingly mainstream conservative view that gun ownership serves as the ultimate check against a tyrannical federal government. The government won’t get out of line and strip away your rights, they argue, if they know you’re packing heat and willing to stand your ground. He’s also subtly nodding to the extremist gun nuts on the conservative right who are thoroughly convinced that Barack Obama is trying to seize their guns, and they are the only thing standing between freedom and the dictatorship of King Obama. “It is well known that in many places where tyranny has taken over they first disarm the people,” he said on ABC this morning. “There’s a reason they disarm the people. They don’t just do it arbitrarily.”

Despite his clear belief to the contrary, all this Nazi talk is bad for Carson. First and foremost, he’s crudely and inaccurately appropriating the worst atrocity of the modern age in order to advance his political agenda. People are going to take offense to that – how could they not? And instead of talking about what Ben Carson plans to do as president, he has us talking about Hitler. He’s the Hitler guy in the 2016 campaign. Generally speaking, when it comes to politics, you never want to be the Hitler guy.