The corporatization of higher education: With a system that caters to the 1 percent, students and faculty get screwed

Low-paid teachers are fighting back against exploitation in public & private colleges. No more poverty wages 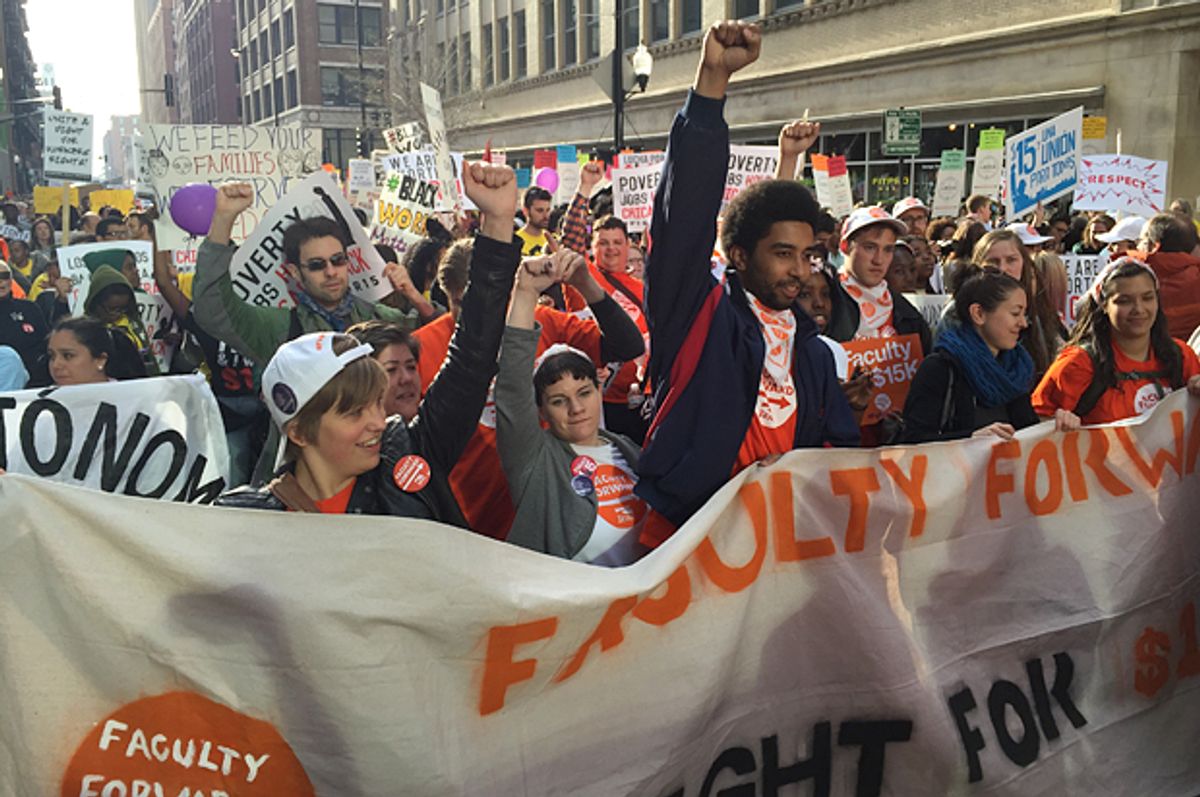 Students aren’t the only ones feeling the financial pinch of college. Faculty members are, too, particularly adjunct professors and recent hires. According to Service Employees International Union analysis, “Thirty-one percent of part-time faculty members and 14 percent of all faculty are living near or below the federal poverty level.”

But nationwide, a growing movement is attempting to change that. In solidarity with Fight for $15 and with the support of labor organizers like SEIU, faculty are calling attention to the crisis of poverty wages and demanding solutions.

Alan Trevithick has been in higher education for almost 25 years. Currently, he is an adjunct professor of sociology at Fordham University in New York City. He also teaches at Westchester Community College and LaGuardia Community College. His heavy workload and low wages have spurred him to become involved in labor campaigns, including staging fasts at Fordham to coincide with Pope Francis’ first U.S. visit.

Traditionally, Trevithick said, adjunct positions were about paying dues. A new professor would accept a part-time or contingent adjunct position on the assumption that it would turn into a full-time, tenure-stream position after a few years. For many, those promotions never came. Eventually, adjuncts became the norm.

“Over four decades, there’s been a replacement of good jobs with bad jobs, essentially,” Trevithick said.

In 1970, adjuncts made up only about 20 percent of the higher education workforce. According to the American Association of University Professors, “Non-tenure-track positions of all types now account for 76 percent of all instructional staff appointments in American higher education.”

Per-course pay for adjunct faculty averages around $2,800. Three courses is typically considered full-time. Trevithick is teaching six. At the average rate, if he did that in both spring and fall — the equivalent of working 80 hours a week, 10 months of the year — he’d make less than $34,000 pre-tax. And that’s at the high end: According to a 2014 congressional report, the median salary for an adjunct was $22,041.

Adjunct faculty are also much less likely to have office space, let alone time for office hours. When he isn’t teaching, grading papers or preparing for a course, Trevithick is commuting.

“I drive into the city, take the train down to the Bronx, drive into Queens, take another train into Westchester,” Trevithick said. “If you have to have a conversation with a student while walking to your car to get to your next job, it’s just not optimal.”

This exploitation of low-wage faculty is part of what’s known as the corporatization of higher education. Increasingly, both public and private colleges are being run on the cost-cutting model of American business. Which presents a burning question: If faculty are being paid less, class sizes are growing and tuition is higher than ever, where is the money going?

“Higher education has become a consumption item,” said Gary Rhoades, a professor in the Educational Policy Studies and Practice unit at the University of Arizona. “When it’s a consumption item, universities invest in the non-educational features they’re pitching to students.”

These non-educational features include student unions, residence halls, gyms and rec centers, sports programs and fields, bloated administration costs, marketing and more. All are geared at attracting wealthier, out-of-state students with the free time to use the services rather than local commuters who may have to hold a job while they go to school.

“It’s a declining demographic, upper-middle-class white students,” Rhoades said. “But that’s who everybody’s chasing. So that means they’re investing in rec centers that are basically fancy country clubs. They’re investing in residence halls that have 60-inch flat-screen TVs. They’re prettifying the campus. When a student is taking a campus tour, they go to residence halls; they go to the student union to see what kind of food is available. They don’t take them into classrooms.”

According to the National Center for Education Statistics, only about 30 percent of an average university’s expenditures are for faculty salaries. Another 12 percent is spent on research. More than half is being put to some non-academic purpose.

The need for change is obvious. Faculty across the country are looking for support from established unions, forming their own unions, fighting for collective bargaining rights and demonstrating against their exploitation.

“There can be a feeling of powerlessness when faculty look at big, systemic, national and global trends,” Nieters said. “So we have to show how we can win when we join together and get past people’s cynicism. There is a need to build relationships across departments and connect faculty who are isolated from each other.”

Those connections have been forming. In the last three years, 10,000 low-wage faculty have signed up with SEIU. Six thousand post-docs in the University of California system are being represented by UAW Local 5810. AAUP has organized faculty at Rutgers, the University of Massachusetts and others. Rallies are popping up all over the country.

Trevithick’s campaign at Fordham appeals to the Catholic sense of social justice. Despite Catholic teachings about the dignity of labor — which Pope Francis reiterated in his visit to the U.S. — Fordham, a Jesuit institution, employs mostly low-wage adjunct faculty. Jesuit institutions like Fordham, Georgetown University and St. Louis University held fasts to bring attention to the topic.

“We're feeling very good about the pope’s visit,” Trevithick said. “He's highly devoted to basic Catholic social teachings on labor — and of course other things — while many Catholic schools are fallen far from those ideals.”

Jesuit faculty have been an important pillar of the adjunct movement. Many are championing a Just Employment Policy, which urges employers to recognize that they “fulfill their obligation to support life when they provide workers with a wage sufficient to fulfill their material, social, and spiritual needs.”

Trevithick is optimistic that the Just Employment Policy can also provide a good model for other organizations. The adjunct faculty movement and Fight for $15, for instance, make natural allies. Both groups are targets of a corporatized agenda to save on labor costs and maximize earnings by employing part-time, contingent personnel and paying as little as possible.

“Many of those fast food workers are our students,” Nieters said. “Faculty have connected what is happening on campuses to Fight for $15 as one struggle for livable wages, job security and respect for working families.”

While there is solidarity and momentum in the low-wage labor movement, opposition can be rabid. Rhoades describes the situation in Dickensian terms: best of times and worst of times.

“There’s more organizing of faculty in higher education than there has been in 30 or 40 years,” Rhoades said. “But at the same time there’s Scott Walker and John Kasich.”

Walker and Kasich, the Republican governors of Wisconsin and Ohio, rose to national prominence over their battles with unions representing teachers, firefighters, nurses and others. Both men became presidential candidates and trumpeted their anti-union record during the primaries. Across the nation, right-wing governors and state legislatures are undermining unions through right-to-work legislation, rolling back collective bargaining rights and eliminating fair share fees for workers who don’t want to sign up for a union but are nonetheless represented by one.

Not only is there union-busting, but state support for higher education remains below pre-recession levels. In both K-12 and higher education, the politically favorable trend is toward charter schools and privatization. That’s choice: Those who can afford good schools are free to go to them; those who can’t can have whatever’s left.

“We now have a generation of politicians and people in the country who don’t want to pay for the education of other kids,” Rhoades said. “When people bash the public schools, they’re really bashing schools in the cities, which are majority minority.”

Within just a few years, those “minority” children will actually be a majority of U.S. children.

“If we decide not to educate low-income kids and kids of color, we’re deciding not to have an educated future,” Rhoades said. “If you’re operating out of a Koch brothers or 1 percent perspective, you don’t care whether the population is educated because you’re peddling to upper-middle-class populations globally.”

Placed in the context of an all-out assault on education, it’s no surprise faculty wages are so miserable. Fortunately, income inequality is starting to be openly discussed even in mainstream presidential politics. Bernie Sanders places the issue at the crux of his campaign and it’s catapulted him to well within striking range of the Democratic nomination.

“When people find out what the real situation is, they’re quite scandalized,” Trevithick said. “It takes them awhile to actually believe it. There’s not a disinclination on the part of the citizenry to have sympathy with people who are really getting screwed over, but they don’t have the info.”

“The employers pushing wages down are often the same people lobbying against state revenue to fund higher education and reduce student debt,” Nieters said. “We're all in this together, one way or another. Our country has moved from good-paying, secure jobs to disposable, low-wage jobs and SEIU is right in the middle of it.”

The efforts of Faculty Forward, an SEIU campaign aimed at reforming higher education, are some of the boldest in the labor movement today. Perhaps its most ambitious goal is raising the national standard for per-course pay from $2,800 to $15,000.

A 500 percent increase may sound lofty, but these instructors usually have at least a master’s degree, if not a Ph.D., and right now many are making minimum wage. Adjuncts are passionate about their jobs; they’d have to be to remain in them for the kind of pay and minimal benefits they currently receive. None of them are opposed to hard work, nor is demanding a living wage looking for a handout.

As those in the movement are fond of saying, faculty working conditions are student learning conditions. When those working conditions include endless commuting, overtime, inadequate workspace and wages so low many can’t even afford an apartment, America doesn’t get the education it needs. That may be fine for the 1 percent, but it certainly shouldn’t be for the rest of us.