The Republican suicide ballad: The party that can’t govern, and the country that hates its guts

The zombie party that cheated its way to power faces chaos, ruin and universal loathing. Now comes the bad part 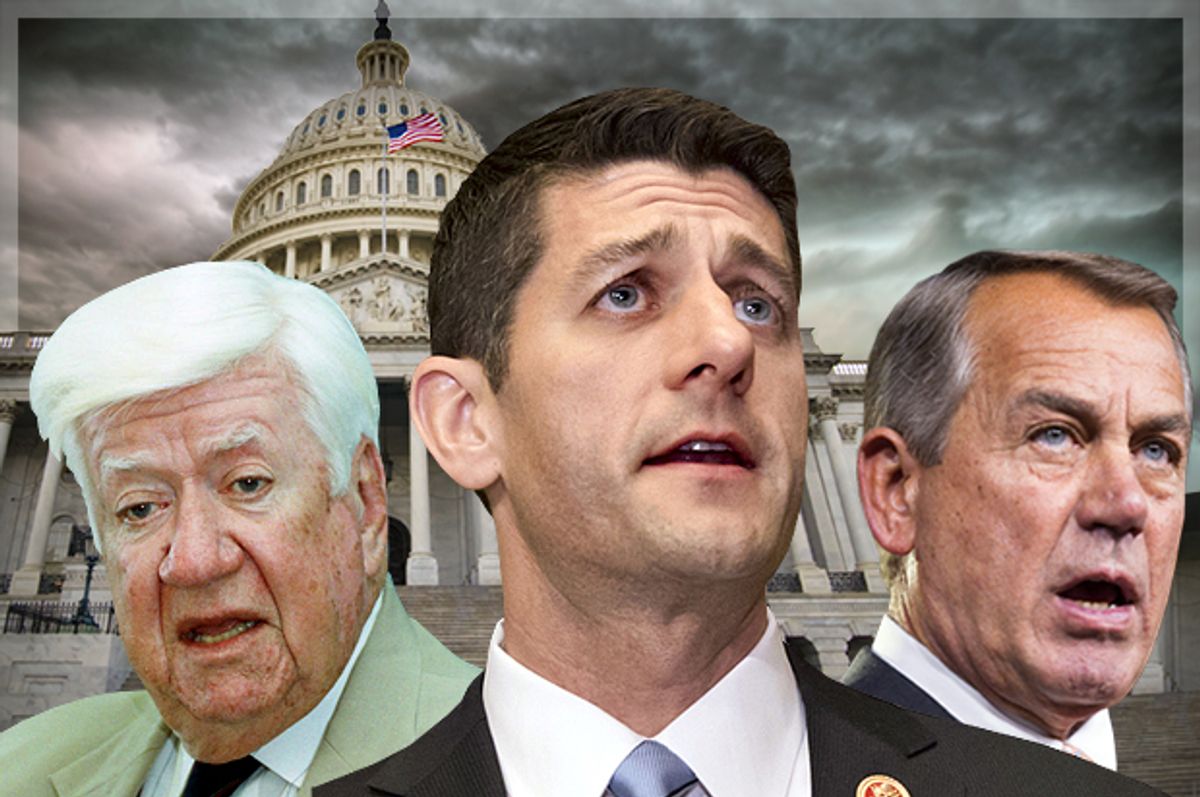 It is time once again to ponder the question of whether the Republican Party can be saved from itself – and if so, what exactly there is to save and why anyone should care. The GOP’s current struggle to find someone, or indeed anyone, who is willing to serve as Speaker of the House of Representatives, the position once held by Henry Clay and Sam Rayburn and Tip O’Neill – the president’s most important counterbalance and negotiating partner, and traditionally the second most powerful job in Washington – is of course a tragic and/or hilarious symptom of much deeper dysfunction.

It’s always time for this question in the cracked crucible of 21st-century American politics, and when considered in full it reaches beyond the arena of Machiavellian power struggle into the abstract theological realm favored by Church scholastics of the Middle Ages. How many angels can dance on the head of a pin? Whatever the number is, it’s infinitely larger than the number of Republicans who want to pick up John Boehner’s poisoned gavel. How large are Heaven and Hell, measured in cubits and ells? Not large enough, it appears, to encompass the pride and arrogance of the House Freedom Caucus, the group of 40-odd far-right Jacobins who first sabotaged Boehner’s speakership and then torpedoed the candidacy of his chosen replacement, Kevin McCarthy.

In the great tradition of doomed revolutionaries, the Freedom Caucus prefers death, or at least political annihilation – which will be theirs one day, and sooner than they think – to the dishonor of compromise. It’s easy to make fun of the vainglory and self-importance embodied in the group’s name, but it strikes me as accurate enough. They have declared themselves free of all the responsibilities of government, free from the need to discuss or negotiate or pass any legislation that has the slightest chance of being enacted. They represent freedom in precisely the same sense that death represents freedom from being alive. They could just as well be called the Suicide Caucus – or the Satanic Caucus, in the grandiose spirit of Milton’s fallen angel, who fights on with no hope of victory: “To do ought good never will be our task,/ But ever to do ill our sole delight.”

I imagine that when we all come back to work on Monday we will find that Paul Ryan has been arm-twisted into filling the role, at least for the next 14 months. But you can’t really blame Ryan, who is devious and intelligent and would like to be president someday, for feeling reluctant to commit political hara-kiri in this fashion. Even before the Republican Party constructed an alternate universe around itself and blotted out political reality, the speaker’s gavel was a final destination, not a pathway to anything larger. As numerous historical articles have now informed us, the last (and only) former House Speaker to move on to the White House was James K. Polk in 1844, and that happened after he had left Congress and served a term as governor of Tennessee. In any event, the fiscal whiz kid of Janesville, Wisconsin, is no better than a Band-Aid applied to the GOP’s gaping wound.

Once upon a time, not so very long ago, the Republicans were boring and small-minded but not especially crazy. They pursued a disastrous foreign-policy agenda during the Cold War, but they were not alone in that, and one could argue that marked the first stages of betraying the tradition of Edmund Burke-style conservatism. On fiscal and social issues, they stood with country-club middle management and small-town Presbyterians and the affluent families who owned the third-largest bank in Indiana or a chain of hardware stores in and around San Diego. I’ve written previously that Richard Nixon and Dwight Eisenhower resemble Leon Trotsky on a crack bender compared to today’s Republicans. On a more personal level the GOP past will always be embodied for me by Mrs. Supinger, who was the postmistress in the tiny California town where I spent much of my childhood.

A severe but polite lady whose hair was always immovably styled and gelled and set in the mode of roughly 1956 (even though there was no beauty parlor within 15 miles), Mrs. Supinger was seen to weep bitterly after Nixon resigned in the summer of 1974, and refused to remove his official portrait from the post-office wall. Maybe that act of civil disobedience – which, in all honesty, I still find perversely admirable – was the beginning of the Republican embrace of "No," the nihilistic or Satanic refusal that has poisoned the contemporary political climate. But if Mrs. Supinger is watching us now, from a high-backed armchair whose lace-covered armrests never need mending, I can’t imagine that she’s pleased to see her beloved party in ruins.

Of course I believe that the Republicans have brought their gruesome predicament upon themselves and that they richly deserve their fate, although they have certainly been nudged toward the precipice by Democratic cowardice and incompetence. Some degree of liberal Schadenfreude is irresistible, and I too cackled when Nancy Pelosi was asked why nobody wanted to be speaker and responded, “You’ll just have to ask nobody.”

But this ugly spectacle could have dire consequences for the country, in the near future and for a long time to come. Whoever the GOP shoves to the podium, whether it’s Ryan or Darrell Issa or Jason Chaffetz or someone even dumber than them, will either have to default on the national debt in November and shut down the government in December or face yet another enraged right-wing revolt. Either way, this Congress (and most likely the next one too, regardless of who is elected president) is a lost cause, and the future viability of bipartisan politics is very much in doubt.

Dear Mrs. Supinger, I will try to explain: Even though the pundit class keeps on telling us that order will eventually be restored in the Republican presidential campaign – in the form of Jeb Bush or Marco Rubio, presumably – I suspect they’ve been smoking that stuff that President Nixon told you was sapping the national morale. At this writing, the leading candidates are still a deranged billionaire who makes impossible promises, a retired black doctor who says outrageous things in a quiet voice, and a likable woman who was a spectacular failure in the business world before she became a spectacular failure in politics. No, I’m not kidding! And none of those people has ever been elected to anything, including church deacon, yearbook president or assistant treasurer of the Ayn Rand fan club.

How did that happen? And what does the crazy-time presidential race have to do with the fact that the Republicans hold their largest congressional majority since 1931 – 247 of the 435 House members – but still can’t find anybody who can win the speakership in a floor vote? Well, Mrs. S, the secret is that nobody actually likes the Republican Party, as it currently exists. The American public is divided between those who hate the Republicans for being irrational and intransigent and racist, and those who hate them for not being irrational and intransigent and racist enough. The only people who still feel affection toward the “Republican brand” are you and a tiny handful of extremely rich people, and since you’re dead you technically don’t count.

That big Republican victory in the 2014 midterms was a masterfully engineered work of fiction – an artifact of voter suppression, voter apathy and the intensive gerrymandering imposed by GOP-dominated state legislatures after the 2010 census. Republican candidates won barely 51 percent of the vote, but thanks to the imaginative redistricting plans imposed in numerous states, that modest margin was dramatically overrepresented in the final result. Even more important, voter turnout fell to 36.6 percent, the lowest in any national election for more than 70 years. Just under 40 million people actually voted for Republicans, while 35.4 million voted for Democrats. That was the lowest Democratic total in 12 years – and also the lowest GOP total in eight years.

Compare those numbers to the Obama re-election year of 2012, when Democratic congressional candidates attracted almost 60 million votes (and still lost seats thanks to the gerrymander), or to the electoral bonanza of 2008, when they got more than 65 million votes. So on one hand, nearly 30 million Democratic votes have vanished into thin air over the course of the last six years, which has been catastrophic to the party’s dreams of a semi-permanent electoral majority. But that doesn’t mean those people switched sides. The Republicans lost voters by the bucket-load too, just on a less epic scale. Their supposedly glorious 2014 victory required 18 million fewer votes than their record high total of 2012 – which was not enough to win the overall popular vote.

In other words, Mrs. Supinger, the Republicans won their gigantic majority by poisoning and paralyzing the government like a Boehner-headed giant scorpion, and now they must face the consequences. They convinced enormous numbers of Democrats and lots of moderate Republicans to give up and stay home because American politics had become worthless and terrible, a conclusion that is difficult to fault. They appealed almost exclusively to their angriest, most zealous and most overtly racist base voters, a loud but relatively small minority of the general population who cannot be called “conservative” in any sense of the word.

These are the people who constantly yammer for more tax cuts, in a country where income-tax rates, especially for the wealthiest citizens, are far below those our grandparents paid in the 1950s. They want all the Mexicans deported, even though illegal immigration is clearly an economic benefit (and is declining on its own). They want to slash social spending to levels that would make the 2008 recession look like a nationwide beach vacation. They want to defund Obamacare and Planned Parenthood, and make steep cuts to Medicare and Medicaid and Social Security – and the only good thing about their agenda is that since they can’t have all of it, they don’t want any of it.

Now the Republicans in Congress, along with the “mainstream” or “establishment” Republican presidential candidates, are discovering what should have been obvious all along: The Frankenstein voter base they bred and nurtured with so much money and so much cunning does not like them or trust them. The fanatics of the Satanic Suicide Caucus and their supporters do not want the current Republican leadership to govern anything, or even try to. They have devoured the old Republican Party of Mrs. Supinger’s day from within, like an alien parasite. When they repeat its catchphrases about fiscal responsibility and social order in their metallic parasite voices, what they really mean is fiscal holocaust, social anarchy and class war against poor women, black people and immigrants. They dream of conquest, but whatever they can’t conquer – starting with their own political party – they will happily destroy.