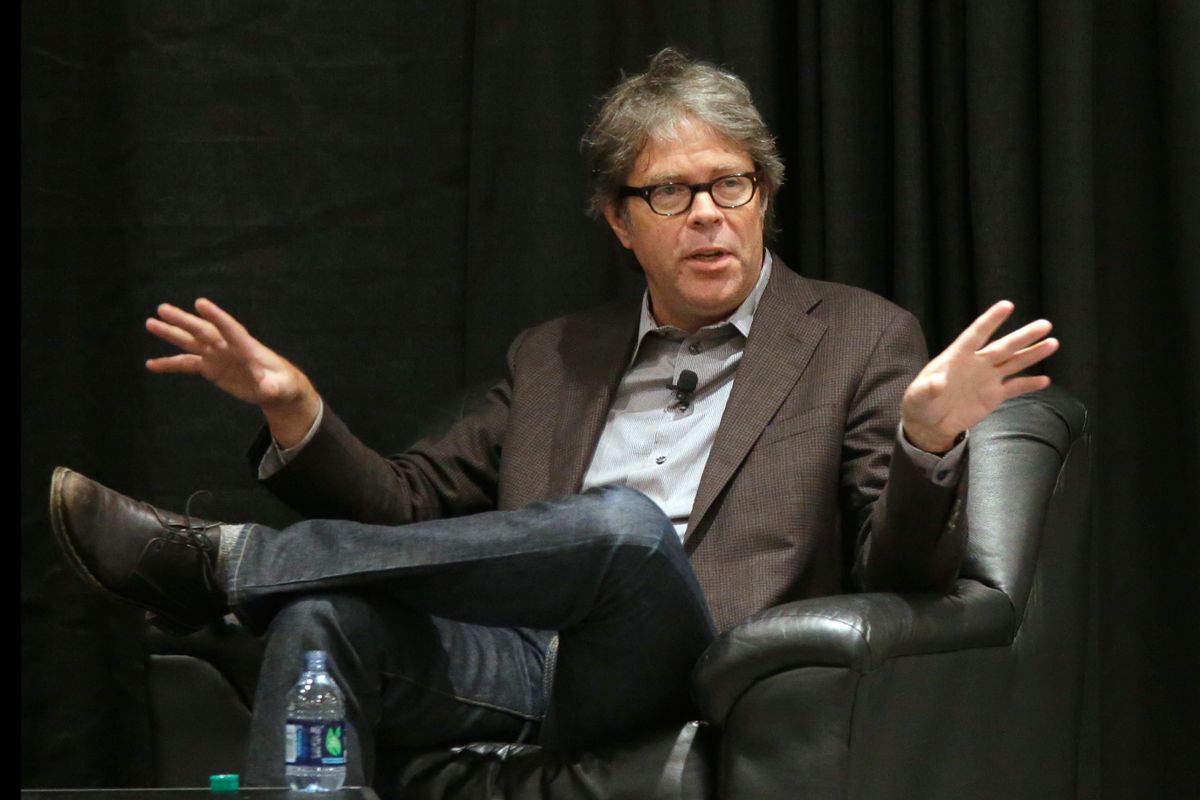 The release of a new Jonathan Franzen book is excellent news, not just for those who love serious literature, but also for those who enjoy participating in our national pastime of Franzenbashing.

True to form, amidst the media flurry surrounding "Purity's" September rollout, we have had the pleasure of watching our favorite gaffe-prone Great American Author sound off on topics such as: Gender bias, social media, climate change, Iraqi war orphans, poverty, and how much he likes Chipotle. (Apparently "store credit was a decisive factor" in publishing a story on the fast-casual burrito joint's cups.) And Franzen himself seems to be having as much fun as we are, as most of his remarks seem deliberately engineered to push our buttons and send social-media spiraling into a tizzy.

Forget Franzenfreude: Franzentrolling is the new Franzen-related neologism of note, and we are here for it.

Here are the most epic moments of Franzentrolling this year — so far:

Franzen and Jennifer Weiner have a long history of animosity, and Franzen fired the first early shot to rekindle their feud in a Q&A with Butler University back in the spring.

After sounding off about Weiner's “formulaic fiction” and accusing her of “ freeloading on the legitimate problem of gender bias in the canon,” Franzen came out with the cherry on top of his gender-trolling soufflé, if you will, confessing that he has never read any of Weiner's books.

"I have yet to hear one person say, 'Oh, she’s really good, you should read her,’” Franzen explained. "And basically if two people say that about a book I’ll read it. I know no one, male or female, who says, 'You’ve got to read Jennifer Weiner.’”

Next he came for the bird-watchers:

The noted bird-lover next made headlines with a New Yorker piece called “Carbon Capture,” in which he argued that the focus on climate change was pulling focus from the issue of conservation, and admitting that he “feel[s] selfish for caring more about birds in the present than about people in the future.” Naturally, the Internet had plenty of things to say about Franzen’s remarks, but perhaps the best smackdown came from the Audubon society, who Franzen criticized in the piece for imperiling the birds they have sworn to protect by too much on conservation.

In a searing takedown for the Audubon Society, Mark Jannot writes that Franzen's argument "is an act of extreme intellectual dishonesty" and that "in order to gin up that caricature... Franzen, who has no journalism experience that I know of, was forced to ignore or actively distort a great deal of inconvenient truth." While he eventually decided to engage with Franzen's argument, Jannot did confess he was tempted to dismiss the whole thing "as the sad ravings of a man trying to escape his guilt-ridden Protestant Puritan heritage and justify his consumerist lifestyle."

Then there was the time he considered adopting an Iraqi war orphan:

In perhaps his most outrage-provoking remarks yet, Franzen told the Guardian that he and his wife once considered adopting an Iraqi war orphan in order to better understand young people. While the L.A. Times points out that Franzen obviously wasn't serious and "was poking fun at the very nature of artistic desperation — his own especially," that didn't stop the Internet from having a field day with the ridiculous idea.

“Oh, it was insane, the idea that Kathy and I were going to adopt an Iraqi war orphan. The whole idea lasted maybe six weeks. And was finally killed by Henry’s [Finder, his New Yorker editor] response. He made a persuasive case for why that was a bad idea. The main thing it did … one of the things that had put me in mind of adoption was a sense of alienation from the younger generation. They seemed politically not the way they should be as young people. I thought people were supposed to be idealistic and angry. And they seemed kind of cynical and not very angry. At least not in any way that was accessible to me. And part of what journalism is for me is spending time with people who I dislike as a class. But I became very fond of them, and what it did was it cured me of my anger at young people.”

And his remarks on sexism:

But the Guardian interview yielded more than one gem, like when he responded to the allegations of sexism that have long been levied against him.

“I am not somebody who goes around saying men are superior, or that male writers are superior,” he said. “In fact, I really go out of my way to champion women’s work that I think is not getting enough attention. None of that is ever enough. Because a villain is needed. It’s like there’s no way to make myself not male.”

He then went on to acknowledge that he is basically just trolling us all at this point, describing a character in “Purity” who makes her husband sit down and pee “to atone for his maleness”:

“There’s a certain degree of glee in putting that stuff in the book, because I know that if you are hostile, you will find ammunition,” he continued. "I wrote this deliriously praising celebration of Edith Wharton. People managed to find a way to make it sound like I was hating on Edith Wharton. So why not just let it all rip and [say]: ‘Have fun with that, guys.’"

When he talked about money:

In a new Financial Times interview, Franzen made some interesting, almost Romney-esque remarks about his relationship with poverty, describing himself boldly as a “poor person who has money."

“I am literally, in terms of my income, a 1 per center, yes,” he says, his eyes not on me but on the empty table next to us. “I spend my time connected to the poverty that’s fundamental to mankind, because I’m a fiction writer.”

He doesn’t write about poverty, I protest. He writes about the angst of people like him and the people he knows. Franzen gives the neighbouring table top a weary look. “That’s a quotation from Flannery O’Connor, by the way.”

While I smart, he goes on: “I’m a poor person who has money.”

Read the full interview here, which also details his frustration with the "sameness" of high-end restaurants, and some words about his cleaning lady, "a nice Filipino woman who we treat very well."