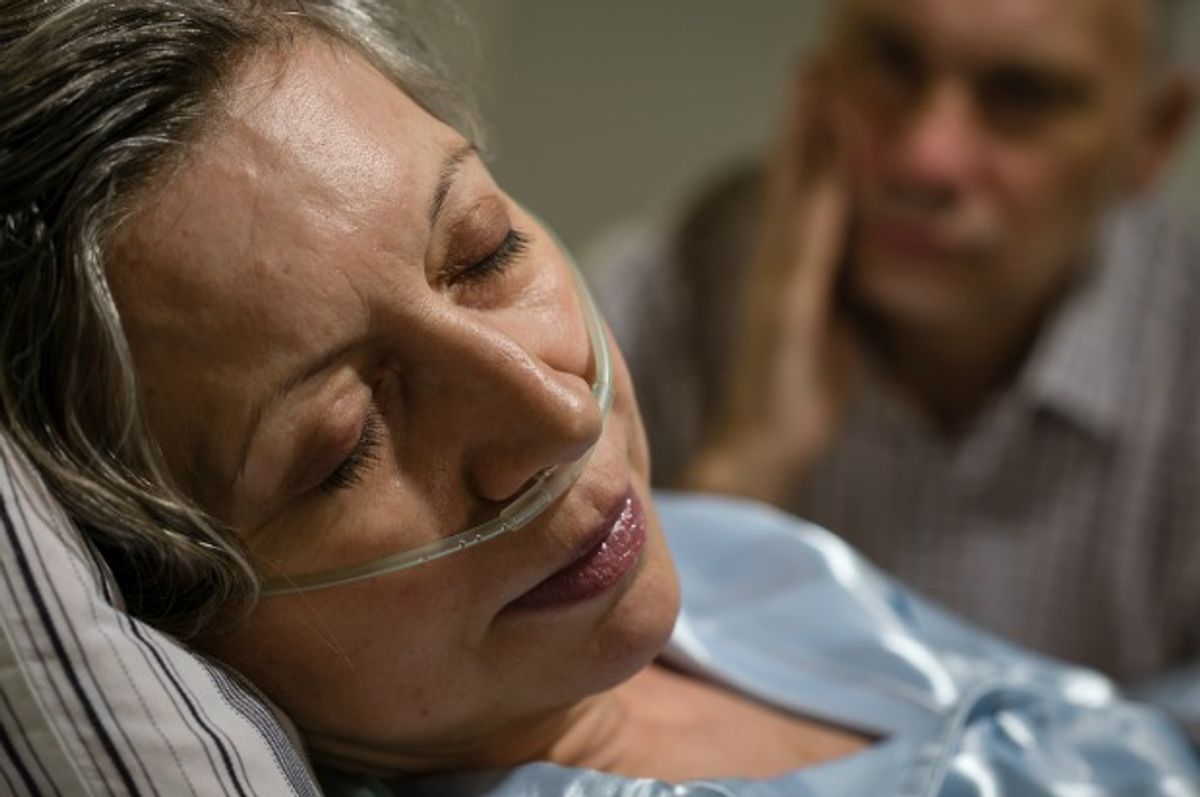 End of life care at home is a better, more cost-effective option (Shutterstock)
--

Governor Jerry Brown has just signed a measure making California the fifth state in the country to legalize physician-assisted suicide for terminally ill patients. A former Jesuit seminary student, Gov. Brown openly voiced conflicting feelings over the bill, but claims he ultimately does not want to deny people the right to end of life options. As a pro-choice liberal with a background working in hospice, most people I know assume I am enthusiastic about the passing of this measure, but the truth is that it gives me pause.

When I was 25 years old my father asked me to help him die. We were standing in his bedroom and he was in the mechanical hospital bed the hospice team had installed. I had just finished brushing his dentures, and they were still drying in my hand, when he proposed the idea that I compile all of his pain meds and help him ingest them. I placed the dentures gently on the swiveling table at his bedside and told him I needed to think about it.

Alone in the living room I stood before the sliding glass doors of my father’s Orange County condominium and watched some neighbor kids playing in the pool. I would have done anything my father asked of me. I had already quit my job so that I could care for him. I had defied his team of doctors who urged me to place him in a skilled care facility, and I had moved into his condo with him, so that he could live out his final weeks in his own home. I slept with a baby monitor next to my pillow, starting out of my sleep every night when I heard his voice.

But this? Helping him die? Something about it didn’t feel right.

I wouldn’t be able to put my finger on what that feeling was until nearly seven years later, long after he was gone. I had been working as a hospice grief counselor in Chicago for nearly four years, and was preparing for the birth of my first child. I spent my days driving around the snowy Illinois suburbs helping people care for their dying loved ones, just as I had with my father.

All that long winter while my belly grew so large that I could barely fit behind the wheel of my car, I was struck by the differences in the ways we welcome life into this world, and the ways in which we pay homage to its end. During my pregnancy I was thrown multiple baby showers, invested hours in birthing classes, employed a doula and a midwife, lit candles as I wrote letters to my yet-to-be-born child, and both inwardly and outwardly celebrated the coming change in my life.

The contrast to the hushed and somber homes in which I watched people meeting the end of their lives was stark. The air was often thick with fear, sadness and resistance. There were no rituals, no ceremonies, and very few blessings bestowed upon the end of life. It turns out that as the human race has extended life well into our eighties and nineties, we have also turned away from facing death.

One of the issues most commonly faced by hospices across the country is the problem of patients who sign up with only a day or two to live. Dr. BJ Miller of the Zen Hospice Project in San Francisco reports that, “in 2012 forty-two percent of Californians died in hospice. That’s almost half. But a third of those were on hospice for less than a week.” Of this dilemma he goes on to explain that, “in a day or two we can get a little physical comfort for the patient, make a little space to dwell in the emotional realm, maybe have a reconciling conversation or two, and maybe eke out a salvaged, non-horrible death. That’s better than the alternative.”

My mother’s death was a prime example of the alternative. Rather than opting for hospice at the end of her four-year battle with colon cancer, as her doctors advised, she continued seeking last-ditch treatments until her very last hours, where she died in the middle of the night in a hospital in Washington, D.C., without saying goodbye to those she loved, having failed to accept the end of her life. My father wanted his death to be different. He knew he was dying; he had accepted this, and he was seemingly at peace with it. His only wish was to do it in his own home.

And so on that day when he asked me for help ending his life, something in me balked. Wasn’t the whole point of this to face it? To be present to death? Unable to bring myself to respond to my father’s request, I instead confided in the hospice nurse. I felt as though I was betraying my father by doing so, but what happened next would ease this concern. The nurse gave me a sad, warm smile and told me something that I would see play out in so many of the homes I would later work in myself.

“Dying isn’t easy,” she said to me. “But there are so many things we can do to make someone more comfortable.” She explained that she wanted to explore the reasons my father wanted to hasten his already impending death. Was it possible that his medications needed to be adjusted, that he was experiencing more pain than was necessary? Or was there perhaps something causing him psychological discomfort?

It turned out that it was both. He was in pain, something the hospice team was able to remedy with adjustments to his medication, but more importantly, he was worried about something. He admitted that he felt burdensome. The guilt he felt about letting me give over my life to take care of the end of his was weighing on him greatly.

I assured him that I was dedicated to sharing his final days with him, no matter how difficult they might be, and I promised him that I would be there, holding his hand, when he took his final breaths.

Those last weeks of his life were not easy, not for him or for me. But they also were not in any way painful or horrific. There were, in fact, many peaceful hours spent, with my father both in and out of consciousness as he slowly ventured towards the end. In his lucid moments we looked into each other’s old, familiar eyes and said beautiful and necessary things to each other. And when he was gone I had no regrets about how he left, or what the circumstances were that led up to his departure, something I very much felt following my mother’s passing, and something I see so often in the clients I counsel through their grief process.

Ever since my father died, ever since witnessing what Miller refers to as a “good death,” I have come to hold a deep reverence for the process of dying. I ultimately support California’s new End of Life bill because I think people should have as much freedom as possible when it comes to their own medical decisions, and I also do not believe people should suffer unnecessarily. But I do think that the actual process of dying should not be overlooked, nor hastened, in cases when there is much that can be done to make it comfortable. Let us not always leap to the last page without at least skimming the last chapter.

My concern about this new measure is that although it appears on the outside to allow us to embrace death in significant way, in certain cases it will also provide a way for us to shrink from it. I do believe that there are cases in which physician-assisted suicide can eliminate potential weeks and months of suffering, but my fear is that some patients will choose assisted suicide as a way of circumnavigating issues that could have been otherwise addressed, such as fear, guilt, and sadness. My hope is that the physicians who are signing off on assisted suicide are asking the same questions that the hospice nurse asked of my father, and that they are looking at all the factors contributing to a patient’s wish to end their life.

My father died naturally only a few weeks after that conversation with the nurse, and I was there holding his hand when he took his last breaths. In those last days we had some of our most profound conversations, moments I’m so grateful we were able to have. His last words to me were, “If there were no death, we would never know how sweet life really is.”