The Democrats play Vegas: The tough debate questions Salon would ask the candidates

With so few debates this cycle, tomorrow night's Las Vegas showdown comes with high stakes for all Dem hopefuls 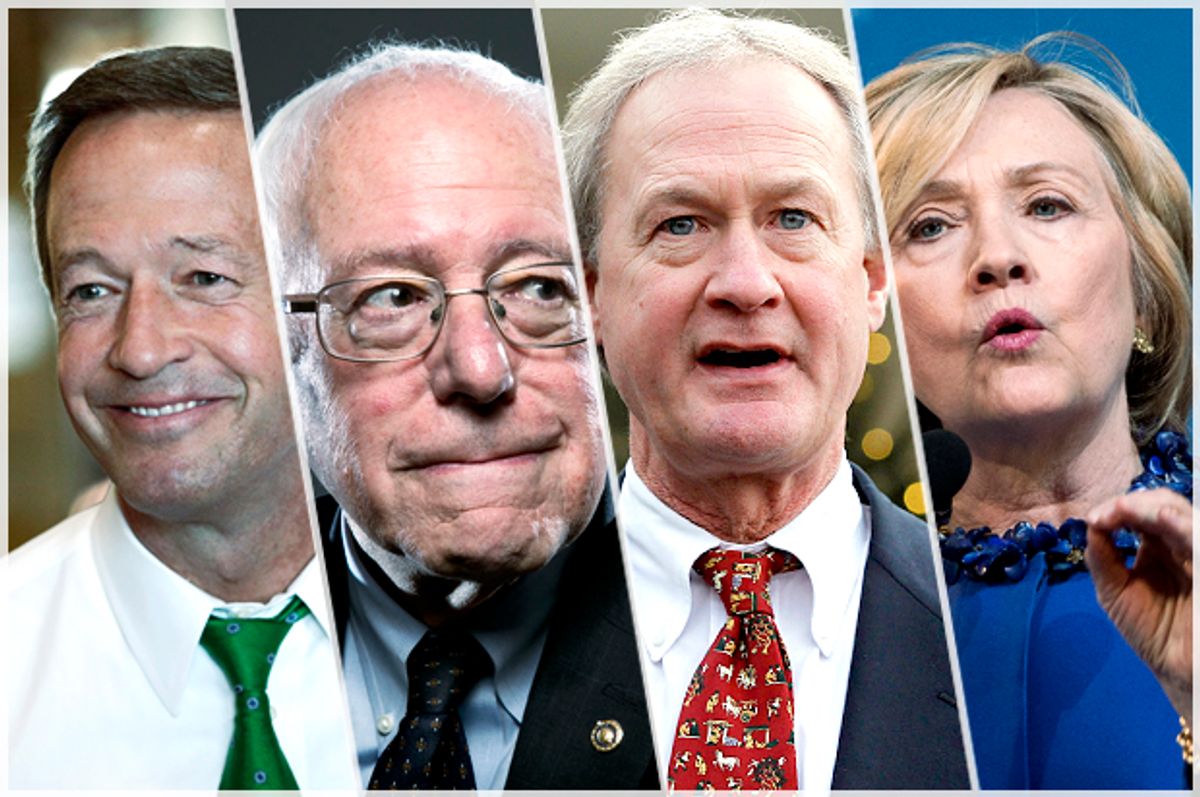 Without the spectacle of a Donald Trump, CNN’s Democratic presidential debate tomorrow evening won’t draw the record 23 million viewers who tuned into the network’s GOP slugfest last month. But as the only Democratic debate scheduled to air on a weeknight before the February 1 Iowa caucuses, Tuesday night’s face-off comes with high stakes for the five candidates slated to appear onstage at the Wynn Las Vegas.

Hillary Clinton, who retains a comfortable but diminished lead, hopes to assuage doubts about her candidacy, but she must avoid a repeat of the disastrous 2007 performance in which she took multiple stances on driver’s licenses for undocumented immigrants -- in the space of one answer. Meanwhile, Bernie Sanders will seek to expand his appeal beyond the white progressive activists who have cheered his egalitarian message, and Martin O’Malley, Jim Webb, and Lincoln Chafee will compete to score break-out performances.

But while much of the post-debate analysis will focus on how well candidates met their own objectives -- Did Clinton stanch the bleeding after a summer of tough headlines and declining polls? Does Sanders look like a viable nominee? Did Chafee manage to remind people he exists? -- in a better world, we’d focus just as much on how well the debate informed voters about the candidates’ policy proposals, worldviews, and track records. So here’s a list of questions -- Salon settled for one per candidate -- that we hope to see moderators Don Lemon and Anderson Cooper ask the hopefuls. They’re designed to probe the candidates’ positions, illuminate what drives them, and get at the core rationale for their candidacies.

Madam Secretary, last week you announced your opposition to the Trans-Pacific Partnership trade agreement, arguing that the pact failed to meet your taste of creating American jobs, boosting wages, and promoting American national security. Yet as Secretary of State in 2012, you championed TPP as “the gold standard in trade agreements,” specifically citing its protections for workers, wages, and American strategic interests.

During your tenure as Secretary, you also advocated for the U.S. free trade agreements with Colombia and South Korea, both of which you fiercely opposed during your 2008 campaign. In that race, you also, along with then-Sen. Obama, called for a renegotiation of the North American Free Trade Agreement, although it emerged that your campaign, like Obama’s, met privately to tell Canadian officials that your campaign-stump skepticism of NAFTA should be taken “with a grain of salt.”

This came just eight years after you expressed concerns about NAFTA during your 2000 Senate campaign -- only to praise the agreement in your 2003 memoir.

Given your record of saying one thing about free trade agreements while you’re campaigning  and doing another while in office, why should Democratic voters trust your latest word on TPP?

Sen. Sanders, you’ve attracted an impassioned following with your call for a “political revolution” against the “billionaire class,” a call which resonates deeply amid widespread anxiety over economic inequality and a growing sense that the deck is stacked against working and middle class families.

Leading that revolution has become the raison d’etre of your campaign, and you’ve also proposed massive investments in health, education, jobs, and infrastructure as a means of improving the economic lot of ordinary Americans.

But while domestic and economic issues are at the forefront of many voters’ minds, the next president will confront a host of international problems, from the long-brewing to the unforeseen. And though you have touted your opposition to the war in Iraq, foreign policy issues have received relatively short shrift during your campaign.

So, Sen. Sanders, what do you see as the three most pressing strategic challenges facing America in the world, and how do you propose the country meets them?

Gov. O’Malley, in an implicit jab at Secretary Clinton, you have declared that “Triangulation is not a strategy that will move America forward. History celebrates profiles in courage, not profiles in convenience.”

Accordingly, you have sounded strongly progressive notes on issues like Wall Street reform, criminal justice, TPP, and income inequality. But eight years ago, you not only endorsed then-Sen. Clinton for president; you also co-authored a Washington Post op-ed arguing that the Democratic Party should adhere to the centrist agenda laid out by President Bill Clinton and the Democratic Leadership Council, rather than embrace a more progressive vision.

As recently as two years ago, when asked about the Trans-Pacific Partnership, you said that free trade agreements like TPP provide a “net benefit” to the United States.

How do you square that record with your contention that you’re an authentic progressive, and what makes Secretary Clinton’s newfound progressive stances any more dubious than your own?

Sen. Webb, you have offered warm words for the Confederacy, railed against gun control, expressed skepticism of the theory of evolution, blasted affirmative action, and dismissed racial, ethnic, and sexual minorities as mere “interest groups.” Moreover, you oppose the Obama administration’s signature diplomatic achievement -- the nuclear deal with Iran -- and lament that the Democratic Party has “moved way far to the left.”

You present yourself as a champion for the working class, but all the other candidates on this stage have adopted economically populist stances. Given that and the cultural gulf that separates you from an increasingly diverse Democratic Party, what is your rationale for seeking the party’s nomination?

Gov. Chafee, during your seven-year tenure as a Republican senator from Rhode Island, you consistently bucked your party on matters of both domestic and foreign policy -- including marriage equality, the George W. Bush tax cuts, and the war in Iraq.

It’s one thing to take positions on controversial issues -- even positions that come to be regarded as prescient. It’s quite another to exercise executive authority. And your recently-concluded four-year stint as governor can be charitably described as a mixed bag. You ushered in marriage equality and a state-level DREAM Act for undocumented students, but you proposed wildly unpopular sales tax increases to the tune of $165 million. While Rhode Island’s unemployment rate declined from 11.4 percent when you took office to 7.1 percent when you left earlier this year, Governing magazine points out that that was worse than the national average, while Rhode  Island’s economic growth lagged behind that of other New England states.

Faced with an approval rating in the 20s and the likelihood that you would have lost the Democratic gubernatorial primary, you opted not to run for re-election in 2014. Why, less than two years later, do you deserve a promotion to the highest office in the land?

What do you see as the Obama administration’s greatest shortcoming, and how do you aim to redress it?