No nipples required: What does Playboy's never-nude future hold?

Post-centerfold, Hugh Hefner's baby will have to figure out its new place in the pack of established competition 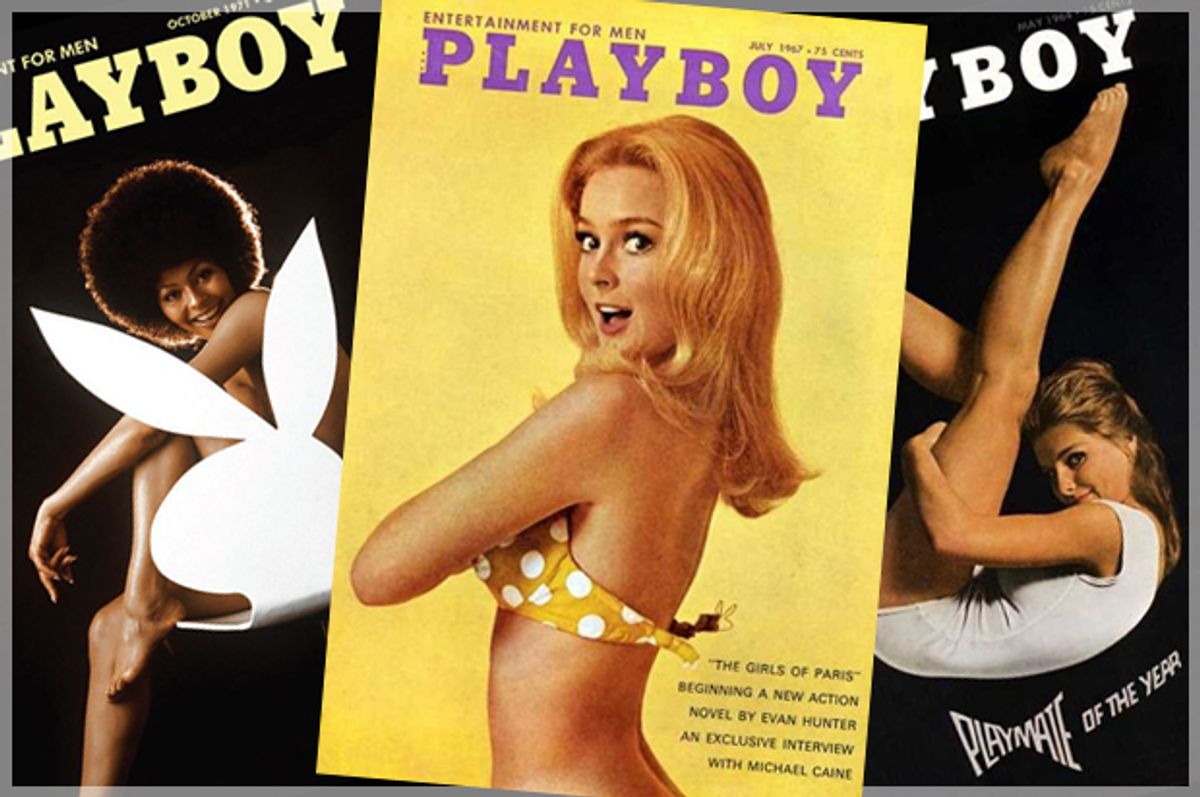 It’s official: beginning with Playboy’s March 2016 issue, there will be no more nude women gracing its pages, according to The New York Times. Playboy chief executive Scott Flanders explained that, essentially, the magazine founded by Hugh Hefner did such a good job making images of nude women acceptable, it’s no longer in any way taboo, illicit or even necessary to the brand. “That battle has been fought and won,” Flanders told the Times. “You’re now one click away from every sex act imaginable for free. And so it’s just passé at this juncture.”

This is not the first time Flanders has used that same p word. He told Entrepreneur in December 2014, “You could argue that nudity is a distraction for us and actually shrinks our audience rather than expands it…At the time when Hef founded the company [in 1953], nudity was provocative, it was attention-grabbing, it was unique and today it’s not. It’s passé.”

As Techcrunch points out, in addition to far more explicit photos and videos being accessible at the touch of a button, nudity may be directly preventing them from growing their online audience. John Biggs wrote, “[n]one of the major carriers of online content allow porn to be sold through their stores. The Disneyfication of online markets is to be expected – nearly every content provider has come down hard on the side of non-prurience except, notably, Reddit – and when there’s money to be made in the Newsstand app (but not the physical newsstand) it makes perfect sense for magazines like Playboy to change.”

Eric Spitznagel, a writer who’s conducted close to 50 interviews for Playboy, calls the move “kind of brilliant, actually. It's an acknowledgment that Playboy isn't the same thing it was 30, 20, even ten years ago.” In an email interview, the 46-year-old contrasted the appeal of the magazine in his youth to its place today. “When I was growing up in the late 70’s, early 80’s, the Playboy centerfold was necessary. It was the only place you could see adult boobies. I remember visiting a friend whose dad had a bunch of Playboys in his basement, and we went through them like spies looking for clues. It felt legitimately dangerous to be reading them, like if we were caught, we'd go to pornography jail. I was so grateful for every photo. But now, in 2015, Playboy isn't even [among] the top 20 places that teenage boys go to find pictures of naked girls.”

He hopes that maybe this is a chance for the writing to truly become the magazine’s focal point and be recognized not as an afterthought, but something noteworthy in and of itself, no nipples required. “As somebody who's written a lot of interviews and articles for Playboy, there's a part of me that's really excited about this,” Spitznagel enthused. “Because every time I write something for Playboy and try to share it on social media, invariably somebody says, ‘What, you mean that magazine has articles too?’ Ha ha ha, funny, I get it, you're talking about the boobies. Yep, Playboy has lots of boobies, but also words too.”

The real question is, who’s going to stick around to read them—and who will pick up the magazine for either the first time, or the first time in years? In Playboy.com’s announcement of the change, they argue that there’s room for a new incarnation of the magazine, one that draws inspiration from its online presence: “Last year we re-launched Playboy.com as a safe-for-work site and discovered something about our readers and our identity: The Bunny transcends nudity…Yes, we’re taking a risk by going non-nude, but this is a company—like all great companies—that has risk in its DNA. It was built around a magazine virtually no one thought would succeed, yet now it’s impossible (for us, anyways) to picture a world without Playboy.” But is it really? Or rather, can the magazine innovate while leaving what made its brand so iconic behind?

In comments on Playboy’s Facebook page, many readers aired their disappointment over the decision. “It was fun while it lasted, this seems eerily like a ‘political correct’ move for the PC world we live in. Looks like you gave into the system you fought so hard against,” wrote one commenter, while another called it “the death of tasteful nudity.”

Lux Alptraum, former editor and publisher of Fleshbot, told Salon the magazine has to figure out what it stands for, if it’s no longer riding on what she calls its “'Mad Men'-era charm.” The legacy of the bachelor with a bevy of girlfriends lifestyle that founder Hefner embodied—and still tries to—as represented in the magazine’s pages, has to evolve with the times if it’s going to succeed. “If Playboy doesn’t have nudity, what is Playboy?” asked Alptraum. “If Playboy is a magazine for men that’s smart cultural commentary, why am I going to read Playboy rather than GQ or Details or The New Yorker or The Atlantic? They’re at an advantage because people know what Playboy is and it’s a strong brand, but if they’re changing what that brand is about, it’s potentially amazing and potentially disastrous.”

While Alptraum doesn’t think it was necessary that Playboy get rid of its nudes, “I understand why they did it,” she said. “Personally, I don’t think the presence or absence of naked pictures matters. Playboy is in this weird middle ground. They had the naked photos for so long because that made them edgy and different and special, and then that ceased to make them edgy and different and special. To me, the question is, what makes them special now? I think taking the nude photos out gives them the ability to compete in a more mainstream environment, but that also means they have more competitors.”

When I mentioned to former Penthouse executive editor Peter Bloch, my old colleague when I was an editor at Penthouse Variations and contributing editor at Penthouse, that my first reaction to this is that it’s either a “crazy or brilliant” move on Playboy’s part, he dismissed both those options. Instead, he called it a “desperate gamble” to save the magazine, whose circulation has dwindled to 800,000 from 5.6 million in 1975, as the Times noted. “They used to have great interviews and they still do from time to time, but so does everybody else,” said Bloch. “I don’t see the rationale for somebody who hasn’t been buying Playboy to now say Oh, they don’t have the girls? Well now I’m going to buy it.”

Bloch said the change could succeed, but will be an uphill battle. “It sounds like they’re going to be competing directly with GQ or maybe Esquire. To go head to head with them, it’s going to take a lot of resources and a lot of great editing. I would guess if they can get some really great innovative young photographs to do great sexy pictures that don’t have overt nudity, people might be interested in looking at them.”

The Times says Playboy is eager to court the 18-30 age group, and women are certainly a part of that desired readership. Chief content officer Cory Jones told the Times they plan to run a sex column by a “’sex-positive female,’ writing enthusiastically about sex.” Last year, Jones explained to Columbia Journalism Review the worldview of its safe for work website, Playboy.com, which relaunched in August 2014: “Playboy is about being a gentleman…I think it’s very inclusive. We have had feminist writers forever; we’re extremely pro-women.” CJR pointed out, though, that Jones “declined to describe the brand as feminist in an interview.”

If Playboy is trying to reach millennial women, 27-year-old writer Gaby Dunn is among their target market—young, hip, feminist and plugged in. She’s the co-star of YouTube show "Just Between Us" and has written for Playboy’s website about her fondness for dick pics. Dunn told Salon, “I'd like them to get back to the literary history they enjoyed when they had really good authors writing for them. Maybe make themselves the sex version of The New York Times Magazine.”

Dunn was less impressed with their plans to try to claim a feminist-minded tone. Her advice for the magazine? “Playboy's audience today strikes me as enlightened bro, so maybe lean into that? Every magazine has a sex positive woman writing a column. If I want that content or if I want to write that content, why would I go to Playboy and be the one woman on a staff of men when I can go write the same article for a magazine that is edited by women and where I can surround myself with women writers?”

As for Spitznagel, while on a personal level, he cops to being “a little sad that there'll be less boobs” in the mag, he dismisses that as pure “nostalgia” for a time that’s come and clearly gone. “I'm also sad that my 4-year-old will never know what it's like to wait an entire week to watch his favorite TV show. Saying ‘Playboy can't get rid of the naked women’ is like saying ‘My son can only watch Bugs Bunny on Saturday morning, because that's the only time I could watch it as a kid.’”