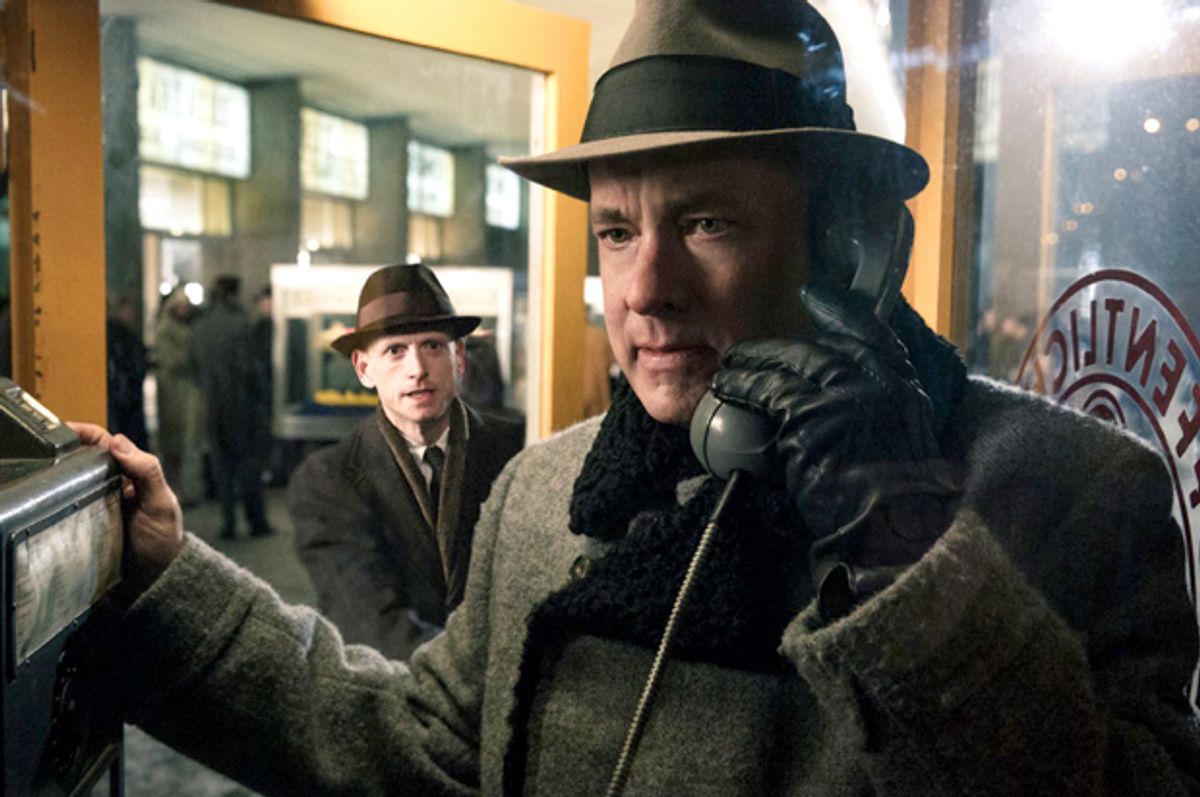 There are any number of manufactured meaningful moments in Steven Spielberg’s lumbering, old-fashioned and richly engaging Cold War drama “Bridge of Spies,” and I don’t entirely mean that as a diss. This is a Spielberg movie starring Tom Hanks, after all, who comes as close here as he ever has (after 20 years of trying) to playing the Jimmy Stewart role in a classic Frank Capra picture about America’s wounded but essentially decent soul. “Bridge of Spies” takes place at a relatively recent moment of American history that would define so much of what has happened since, and was co-written by Joel and Ethan Coen – who are younger than Spielberg, but also remember that era. If this movie's not going to have wistful, ambiguous moments of resonance, it’s not going to have any damn thing at all.

Let me work my way toward the moment in “Bridge of Spies” that simultaneously moved me and rankled me, and that captures the movie’s greatest strengths and most abundant weaknesses – always closely related, in the case of any Spielberg film. Hanks plays an upstanding New York attorney named James B. Donovan (a historical figure, although contained her in one of those Hollywoodized narratives “inspired by true events”), a onetime prosecutor at the Nuremberg war crimes tribunal who has taken on two difficult assignments at the behest of the United States government. One of them gets him in trouble with his wife and his law firm, and pilloried in the press as a Red sympathizer and possible traitor. The other one ends up getting him depicted as a national hero.

First off, Donovan agrees to defend accused Soviet spy Rudolf Abel (played here by the marvelous English actor Mark Rylance), an assignment several other prominent attorneys have refused. As the Coens and co-writer Matt Charman tell the story, this begins as a straightforward question of legal principle: Every criminal suspect, guilty or not, is entitled to a competent defense. But when Donovan comes to understand that Abel’s conviction is a foregone conclusion, and that the government wants something that looks like due process rather than the real thing, he moves toward more aggressive tactics. This is largely true, by the way: The real Jim Donovan damn near got Abel’s verdict thrown out, arguing before the Supreme Court that the incriminating evidence seized by the FBI came from a warrantless search, and that even an enemy spy (if charged as a criminal defendant) was entitled to Fourth Amendment rights. He lost that case by a 5-4 vote.

A few years later – the chronology of “Bridge of Spies” is, I suppose, deliberately murky – Donovan embarks on a secret mission to East Berlin after the U-2 incident of 1960, when the Soviets shot down a CIA spy plane and captured its pilot, the briefly famous and/or notorious Francis Gary Powers (played here by the bland, WASPy Austin Stowell). It seems ludicrous to protect spoilers in a story about an episode that concluded 53 years ago, but I suppose we can say that there’s plenty of atmospheric Berlin Wall cloak-and-dagger stuff, agreeable performances from Mikhail Gorevoy as an unctuous Soviet negotiator and Sebastian Koch as a shadowy, suave East German, and the obligatory Spielbergian in-jokes drawn from cinema history. (Donovan walks past a Berlin cinema that’s showing a film called “Ein Zwei Drei” – that is, Billy Wilder’s “One, Two, Three,” a farce about the collision of capitalism and Communism in occupied Berlin.)

If you want to know what happened to Rudolf Abel, and how the Americans eventually got Gary Powers back, you can go read Wikipedia. You can also see “Bridge of Spies,” of course, if you keep in mind that it’s a Tom Hanks Oscar-bait movie more than a history lesson. It doesn’t misrepresent the facts, or not exactly, but it shears them free of context to a large and damaging extent. Anyway, towards the end of the film, with all that business squared away, we see Donovan riding an elevated train over the placid outer-borough suburbs of the early 1960s. He’s trying to ignore the fact that the other passengers have noticed him, because his face is on or near the front page of every New York newspaper that morning. (There were at least five of those at the time, maybe more.)

So instead Donovan looks out the window in contentment, surveying the sunlit and prosperous nation whose most important principles he has defended. Then the train crosses one of those invisible urban boundaries into a poorer Brooklyn neighborhood of tightly packed multi-story buildings, and he sees a gang of kids scrambling over a back fence from one yard to another, quite likely up to no good. A cloud of fatherly moral concern passes over the sunny Tom Hanks visage, and it’s like a Capra-Stewart monologue, delivered in silence: Are we living up to the promises we made to each other? When we insist that we stand for freedom and equal opportunity, do we really mean it? How much better than the Commies are we, in fact?

Spielberg is pushing an entirely unexceptional version of Hollywood liberal idealism here: Yes, we are a better and nobler nation, because at least we still ask ourselves these questions. Rudolf Abel may have been railroaded, but he had a good and honest lawyer, and he was not tortured or subjected to brutal interrogation (as Gary Powers clearly was). But when we lose track of those questions, when we no longer have the Jimmy Stewart-Atticus Finch-Tom Hanks paradigm of Establishment masculine decency to fall back on, we’re in trouble. I have no particular problem with that lesson plan, although one could say that the historical record calls for a sterner admonition, and it’s delivered here with such Hanksian blandness that viewers are clearly offered the opportunity of missing the point entirely.

“Bridge of Spies” is meant to be an inspiring Capraesque fable about Jim Donovan, exemplary American, and that's fair enough. But in constructing that fable Spielberg and the writers skip over all the most important and interesting material about the U-2 incident. CIA director Allen Dulles was at once needlessly paranoid about Soviet plans for thermonuclear war and overconfident about American technology. Although depicted to the public as a super-secret, cutting-edge surveillance aircraft, the U-2 was a flimsy, underpowered construction that the Soviets had no trouble detecting and shooting down.

Powers did not disable or destroy the plane (as he had been ordered to do) and did not commit suicide when faced with capture (ditto). He probably wound up telling the Russians everything he knew about the CIA and the U-2 program -- and you and I would have too, of course. Soviet leader Nikita Khrushchev trolled President Dwight Eisenhower for weeks after the initial incident, delaying the news that Powers had been captured alive and inducing the Americans into spinning all kinds of embarrassing falsehoods about the supposed weather-spotting plane that had supposedly wandered of course after its pilot supposedly asphyxiated. Ike felt so despondent after the real story came out that he briefly contemplated resignation.

In terms of historical fact, the U-2 episode was a massive Soviet propaganda victory that made the United States look incompetent, arrogant and poorly prepared. There are valid commercial reasons why Steven Spielberg doesn’t want to tell that story, but those reasons make clear that “Bridge of Spies” is itself a form of historical whitewashing, albeit one less noxious and harmful than the customary American variety. I liked the movie a lot – it’s one of Spielberg’s most measured and most adult films in years, with production values every bit as good as you’d expect. And it would be awesome, in terms of cultural and historical impact, if the ideologues at Breitbart and Drudge and so on decide to heap invective on this tale of Jim Donovan’s backstage role in the Cold War as pantywaist, lily-livered, anti-American moral relativism.

But to haul out one of the bigger critical truisms (which happens to be true), stories about the past are invariably stories about the present in disguise, and this one has a double edge that goes beyond anything that Spielberg and Hanks and their writers intend. Those who insisted in the late 1950s that the Constitution did not apply to Rudolf Abel – because we faced an implacable foe and it was a time of national emergency and so on -- have made the same argument many times in many ways, and make it today about anyone associated with “terrorism,” no matter how tenuous the linkage or how scanty the evidence. That’s a dangerous ideological illness that is well worth noticing. So is the seductive fiction that a redeemer will arise among us, played by Tom Hanks playing Jimmy Stewart playing an upstanding lawyer who believes in the reasonable middle ground of the American way. Look around you: Where is that hero today?