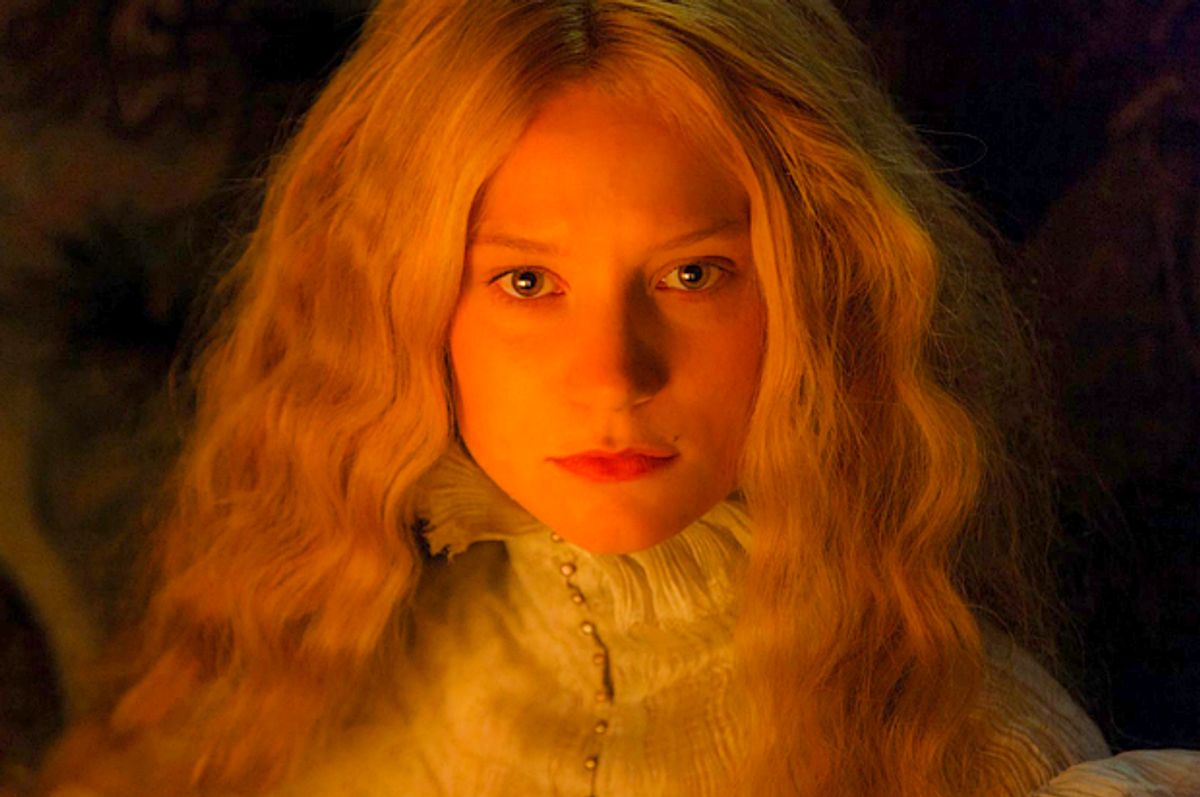 Here’s the thing about “Crimson Peak,” which is lurid and ghastly and immensely enjoyable and frequently spectacular and also thinner and less substantial than it wants to be, like a meal eaten in a dream. It’s not just the movie that Guillermo del Toro, the flawed, doomed Mexican genius of horror and fantasy, has wanted to make for years. It’s all of them at once. While the Brontë sisters were dying of fever in their dismal swamp, “Crimson Peak” might have been the über-Gothic yarn that flickered through their overheated brains – if they’d also had sexual congress with Satan and consumed a bunch of ‘shrooms. It’s part Mary Shelley and part Arthur Conan Doyle (both authors are specifically mentioned), but it’s also “Jane Eyre” and H.P. Lovecraft and Hitchcock’s “Rebecca” and Sam Raimi’s “Evil Dead” and a little 19th-century American realism by way of Edith Wharton or William Dean Howells.

Indeed, the film’s title refers to a crumbling ancestral manse more dreadful than the Thornfield Hall of “Jane Eyre,” and perhaps even more toxic than Haworth Parsonage, where the Brontë daughters nurtured their literary genius and then died. (One gruesome hypothesis is that Haworth’s water supply was contaminated by the rotting human remains in the adjacent cemetery.) When the handsome but mysterious Sir Thomas Sharpe (Tom Hiddleston), the consummate English gentleman with a secret, brings his virginal, literary-minded American bride Edith (Mia Wasikowska) home to his estate in the remote hills of Cumbria, the only big surprise is that she doesn’t flee immediately. Edith has read a lot of books back in Buffalo, but apparently not the right ones.

Sharpe’s garish and rambling manor house resembles the Haunted Mansion at Disneyland more than an actual English domicile of any vintage. It has an enormous hole in the roof, so rain and snow and birds and insects enter at will, and huge cracks in the floor, where the house is subsiding into the oozy red clay of the underlying hillside. That’s right: Bats upstairs, blood-colored goo coming through the foundation, and an old-fashioned cage elevator you can ride all the way down to the sub-basement. Clank, clank, clank; glub, glub, glub. There’s no need for ghosties and goblins to come in through either aperture, because they’re already here. Edith encounters several, among them a hideous corpse figure in the upstairs bathtub who’s an obvious nod to “The Shining” (one of perhaps three dozen literary or film references one could pick out).

But the most frightening specter in Sir Thomas’ household is clearly his not-quite-undead sister Lucille, played by Jessica Chastain in a series of forbidding gowns and wigs that split the difference between spinsterly severity and “hot damn.” I suppose the problem with Lucille is the same as the problem with “Crimson Peak” overall, which is that she’s a magnificent creation but we’re never quite sure whether to view her as campy and hilarious or genuinely terrifying. Many of the influences that del Toro and co-writer Matthew Robbins have channeled into this passion project – which has been gestating ever since the release of “Pan’s Labyrinth” in 2006 – partake of both elements, to be sure: The Hammer horror films of the ‘60s (geek alert: Edith’s last name is Cushing!) or Lovecraft’s ludicrous tales of gelatinous entities from beyond time.

Don’t get me wrong: I will happily watch Chastain in anything, and this movie is almost everything. So we see her here feeding butterflies to ants and seducing American provincials at the piano and bringing obviously poisonous tea to her new sister-in-law and prowling the corridors of her lugubrious home with a silky, serpentine demeanor that sets the rats to flight. It pains me to report that when we finally find out what Lucille is up to, it is A) not a surprise at all, and B) not a sufficient explanation for all her ritualistic, quasi-vampirical behavior, which really calls for worship of the Old Gods or fulfillment of some pre-Christian family ritual or cannibalism on a commercial scale.

If Hiddleston’s Sir Thomas is something of a ditherer and dreamer, who can’t quite decide whether his loyalties lie with his blushing bride or his sinister sister, he belongs to the long tradition of Gothic semi-heroes who are weaker than the women around them. (I’ve only seen Hiddleston play upper-crust Englishmen, Shakespearean monarchs or the duplicitous Norse god Loki in the Marvel universe, so I’m eager to find out what he can do as Hank Williams in the upcoming “I Saw the Light.”) In “Crimson Peak,” Hiddleston’s best work comes before we even get to the Gothic manse of shrieking corpses and bubbling crimson glop, during the extended prefatory tale we’ve already had an entirely different story about Gilded Age social mores and venture capitalism set in turn-of-the-century Buffalo.

That’s where Sir Thomas shows up, supposedly to find Yankee funding for a steam-powered engine that will extract the gore-tastic gunk from beneath Crimson Peak and render it into bricks for the American building boom. But does he really want to join the Industrial Age, or do he and Lucille have eyes only for the bookish, wide-eyed girl who stands to inherit a fortune if something should befall her self-made millionaire father (played by veteran TV actor Jim Beaver)? Dad smells a rat right away, and so does the lunk-like young doctor played by Charlie Hunnam, who’s too smitten by Edith to make a move. But all this drawing-room intrigue points back to the fact that “Crimson Peak” is effectively an imitation of 25 different kinds of things, in this case a certain variety of 1930s or ‘40s film that requires a long, genial windup in “normal” surroundings before it gets to the actual plot.

If you’re not the exact kind of culture-vulture weirdo for whom del Toro has made this movie – a demographic that definitely includes me, and is not necessarily tiny – I’m not sure that “Crimson Peak” will make any damn sense at all. As the director has himself observed, it’s a female-centric film in a genre typically aimed at teenage boys and young men. It’s heavy on visuals, to the level of morning-after-Halloween candy hangover, but it also calls upon innumerable cultural references that are not massively popular. It’s mannered and stylized and layered to deliberate but almost suffocating excess – if production designer Thomas E. Sanders and costume designer Kate Hawley don’t get Oscar nods, then there truly is no God of movies.

It’s unduly harsh, no doubt, to suggest that the master visual fantasist of our age has pursued his dream project, or at least one of them, into yet another creative and commercial dead end. (Del Toro got fired from the “Hobbit” trilogy, or fired himself. He has been unable to fund his proposed adaptations of “Frankenstein” or Lovecraft’s “At the Mountains of Madness.” Even though “Pacific Rim,” his expensive attempt to reanimate the kaiju genre, ultimately turned a profit, Hollywood scuttlebutt suggests that the planned sequels probably won’t happen.) “Crimson Peak” will find a loyal following – maybe not in movie theaters in the fall of 2015, but eventually. Still, I can’t help feeling that Guillermo del Toro’s career is like Sir Thomas’ haunted mansion, a magnificent and impossible concoction from another time, open to the sky and with a basement full of evil gunk.