It's not easy being a black Tarantino fan: He wants to be treated like a black filmmaker — and doesn't get why that's impossible 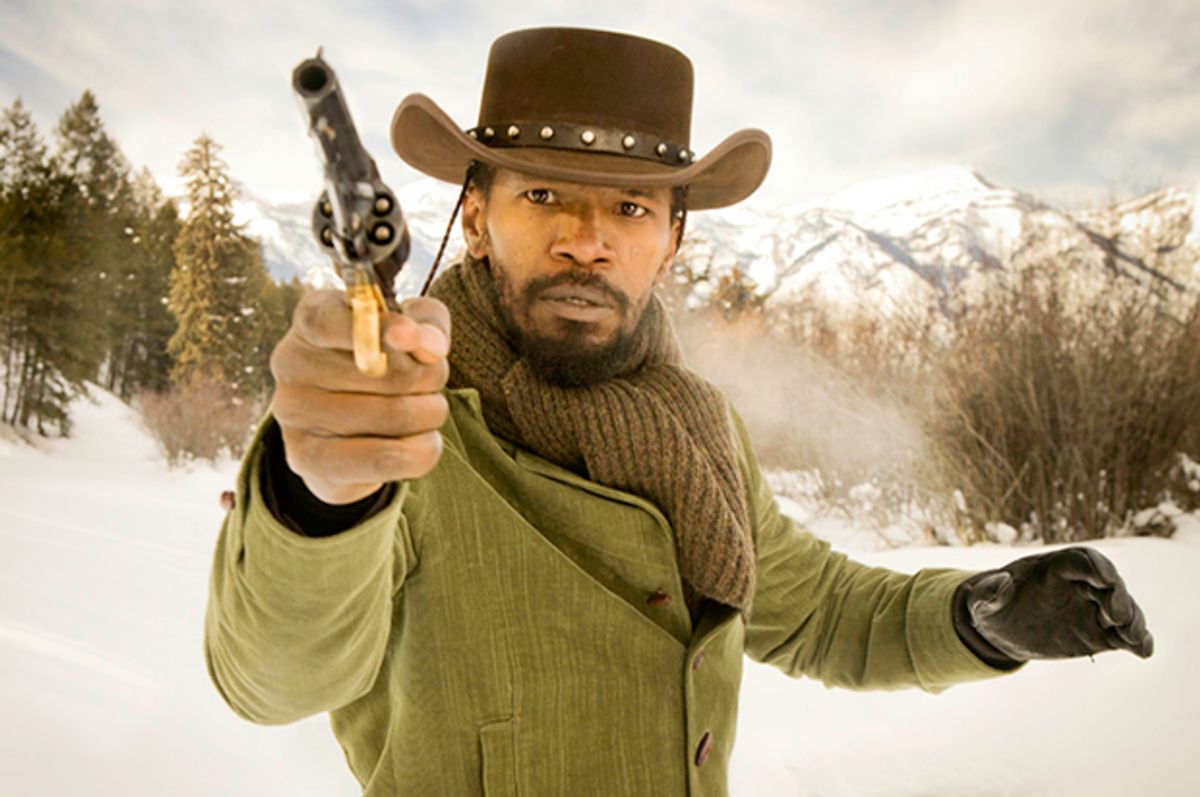 I’ve been a fan of Quentin Tarantino since 1997 when my best friend showed me “Pulp Fiction” on VHS one afternoon after a particularly awful day at our particularly awful high school. It was unlike anything I’d ever seen. My favorite movies up to that point were “People Under the Stairs” and “Buffy the Vampire Slayer.” Like most, I fell in love with the cult classic’s dialogue and Tarantino’s audacity — his film dared to be shocking, sexual and ultra-violent.

After that, “Pulp Fiction” occupied its own space in my heart. I wanted to know more about the new legend who created this amazing cinematic feat. I read magazine articles that showcased his madness. I waited patiently for my dial-up to connect so that I could scour the Internet for more info on my new favorite filmmaker. In each article, he seemed to be comprised of equal parts hubris and vision—an eccentric after my own heart.

Over time, I consumed every minute of Tarantino’s catalogue and watched his new releases vigilantly (and repeatedly) on opening weekend — he was event cinema for me. His interviews only fueled by fandom — he was not afraid to speak his mind with fervor. Tarantino went to battle against critics who opposed his excessive use of the n-word in nearly every movie he directed. He combated and shot back—it was war for him. Sometimes, his response included cringe-worthy sentiments, but even at a young age I attributed these thoughts to the fact that he was a white man in a power position who sees things from a privileged scope. As a teen, and as an adult, I always understood this.

But I appreciated his films as much as I disagreed with his opinions. I never viewed Tarantino’s movies as anti-Black or grossly exploitative. To be honest, I don’t cringe when n-bombs get dropped in his movies because I feel as though I do understand his intentions. I can’t say the same of Martin Scorsese, another controversial iconic filmmaker who likes to evoke the n-word in so many of his films. When Scorsese’s characters drop their copious n-bombs, it stings and I judge him for it. I understand his rationale but for me, his usage doesn’t serve the story, it takes me out of it. Tarantino’s characters live in a world veiled in brutal fairytale-like whimsy, where a Black person can be a hero in a world that uses the n-word. While in Scorsese’s cinematic universe the n-word is dropped constantly and Black people barely exist; they certainly aren’t the hero or even a featured player.

Tarantino was roundly criticized for his rampant use of the word in 2013’s “Django Unchained.” (It is muttered, spoken, and yelled over 100 times) Some people were horrified, others negatively judged the movie sight unseen, while others understood its usage to be representative of how often the word was used during the movie’s time period. I remember seeing the trailer for the first time and getting butterflies in my stomach as I watched Jamie Foxx embody Django. It was unlike anything I’d seen before, and the fact that it was released during the Christmas season made it even more of an event for me. So I did what any Black Tarantino fan would do — I packed my mother, father, and sister in the car and we all went to see it on Christmas Day. Every showing was sold out and the theater was filled with people from all walks of life. We winced, marveled, cringed, laughed, became somber, and cheered when Django rescued his wife and took his ultimate revenge. Everyone walking out of the theater shared their thoughts with excitement. The images and actions from the film were undoubtedly thought-provoking and stirred strong emotions in every viewer I’ve spoken to.

While controversial for its fantastical depiction of one of the most disgusting times in U.S. history, "Django" is at its base a story of love and revenge, which also happens to be set in a time of horrific adversity. It showcased moments like Mandingo fighting and slave auctioning in a way that were unseen in modern-day popular cinema. Many people have no idea just how sadistic and dehumanizing chattel slavery was because those details never made it into our high school history textbooks. My family silently acknowledged the discomfort of the white family sitting in front of us as they put their heads down and winced during the more raw elements in the movie. It was Tarantino-esque fantasy, but it was also a part of a brutal reality that some would rather wash away.

When Tarantino set out to make a movie in this era, I knew the result would not be “12 Years a Slave.” He makes visceral work in the fantasy realm in worlds he manipulates and crafts in his own mind; and his action romance set in the slavery era would be no different. Unlike “Pulp Fiction,” though — a fun, raucous puzzle piece of re-watchable cinema —  “Django” felt like Tarantino finally cracked the code and figured out how to make an emotional connection with his audience. There were hints of this maturity in 2009’s epic war saga “Inglourious Basterds,” primarily in most of the scenes featuring Shosanna, and in the sorely underrated “Jackie Brown,” which was visually so romantic. The way that Tarantino’s direction and lens captured Pam Grier, you could feel his awe of her. As the title character, Pam Grier was layered, flawed, and empowered in ways that aren’t commonly seen in black female lead characters in major motion pictures. Through his work, I see Tarantino operating out of love.

So I have followed Tarantino from “Pulp Fiction” to “Django Unchained” and I understand that he enjoys Black culture and wants to be able to create his own take on the experience without criticism and backlash. But what he fails to understand is that this is impossible. He is asking to be treated like a Black filmmaker, which presents an interesting quandary. Black filmmakers rarely get a chance to tell Black stories on any scale, while Tarantino has carte blanche to tell any Black story he chooses. He’s too firmly in his privilege to see and understand this circumstance.

People have the right to be critical of his characters of color and of his usage of the n-word; in this way alone, the color of Tarantino’s skin will always be an issue, the same way color is consistently an issue in Hollywood. We will always need to talk about race, even if a balance is achieved and proper representation is realized. Our racial wounds are deep, and they will not heal if left unacknowledged. For as long as Tarantino includes people of color in his ever-popular films, this criticism will shadow him. But if Tarantino makes a movie without Blacks or the n-word, people will have something to say about the absence. He’s caught in a Black Catch-22.

Tarantino’s recent interview in the New York Times T magazine “Greats” issue, conducted by provocative “American Psycho” author Bret Easton Ellis, has rubbed people the wrong way and reignited controversy over his approach to race in his films. I read the interview and it was the same song he’s been singing forever. He’s a talented, egotistical, eccentric, successful Hollywood director who rebukes any and all criticism: "If people don’t like my movies, they don’t like my movies, and if they don’t get it, it doesn’t matter." To exacerbate matters, he also shits on Ava DuVernay’s “Selma,” stating that the epic civil rights movie was more deserving of an Emmy than an Oscar — and now admits he hasn't even seen it. The sentiment is unbecoming and incredibly rude, but also completely on-brand for Tarantino — this is the same man who recently took shots at Cate Blanchett and once dressed down “Fresh Air” host Terry Gross for questioning the violence in his movies.

He is crass, blunt, and a goldmine for soundbites and eye-catching headlines. And as I see people of color assemble to get Tarantino out the paint, I hold steady and smother feelings of guilt.

I do not agree with many of Tarantino’s opinions, rantings, or bullying. I just love his art. I enjoy seeing him remix movies from the past, with their inspired casts and modern day rapid fire pop culture saturated dialogue. It’s the same argument that many people make for enjoying the works of Woody Allen, Roman Polanski, Bill Cosby, and a slew of other talented but problematic entertainment figures.Quentin Tarantino is the first artist that made me realize that I needed to learn how to separate the art from the artist, and I thank him for that and for his execution and vision of the cinema that I love. The truth is, a lot of our faves are ultra-problematic — some are even criminals. It’s up to fans in the audience to decide if we can enjoy their art despite their real-life actions.

Desiree Bowie is a freelance writer based in Los Angeles. She has written for Ebony, The Fix, Madame Noire and Black Girl Nerds. Follow her on twitter @dangerbowie and at her website.