Bernie brought his A game, but Hillary still comes out on top -- maybe by enough to keep Biden out of the race 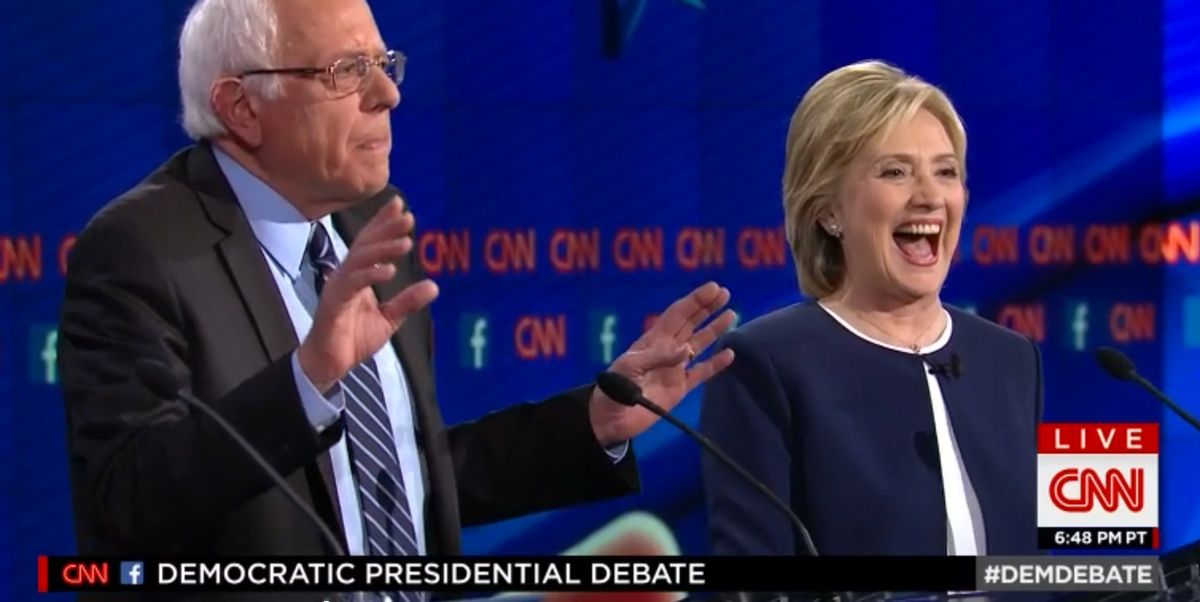 Towards the end of the debate, there was an exchange about family leave that showed that, despite a few bumps over issues like Wall Street reform, Hillary Clinton came across as the candidate who was most plugged into how modern Democratic voters think about the issues. When Dana Bash went after Clinton's support for family leave by framing it as "another government program," Clinton stomped that nonsense out like a boss.

First she pointed out that is an empty Republican talking point and then she pivoted to a woman's right to choose, noting that Republicans certainly love "big government" when it comes to stripping women of their reproductive autonomy. It was a smart performance, tying various feminist concerns together, linking them to larger economic concerns, and taking a swipe at Republicans. The audience went nuts for it.

Bernie Sanders then jumped in, agreeing with Clinton's support for family leave and reminding voters that other industrialized countries have generous leave. But he rooted his argument not in a broader feminist argument, but instead argued that the ideal is having mothers at home with their babies. While he's not wrong that this is what most women will use family leave for, it was still frustrating to see such essentialist ideas---what about dads who want to stay home or women who actually want to go back to work?---being invoked in service of an otherwise good idea.

The exchange epitomized the overall debate: Both Sanders and Clinton highlighted their progressive views, but Clinton came across as more competent and comprehensive. Sanders is a bulldog on his economic ideas, but Clinton seemed more comfortable talking about a variety of issues that are dear to liberal hearts. (With the notable exception of marijuana legalization, where Sanders put himself ahead of the curve, with Clinton lingering in the "medical marijuana is okay, I guess" territory.) She played up her intelligence and didn't give into the urge to try to get people to like her, which ironically makes it easier to like her.

That isn't to say that Sanders failed. If his goals are to bring progressive ideas to the forefront and to push the party to the left, he also succeeded with aplomb. But the real revelation was how Sanders, despite being Clinton's opponent, might actually be her best friend in this election. Clinton is better when she's talking about policy than about horse race issues like personality, and Sanders's insistence on talking about substance instead of flash helped keep the moderators, and therefore her, focused on areas she's strong on.

This was made more obvious when Cooper tried to make Clinton's email non-scandal an issue. Instead of doing the typical politician move and seizing on this as an opportunity to score points, Sanders defended Clinton, arguing that the email issue is a distraction from the real issues voters care about.

Sanders also helps Clinton, though she'll probably never thank him for it, by putting pressure on her when it comes to economic issues. It forces her to the left and forces her to highlight how progressives and liberal she actually is. That's for the best when it comes to the long-term. Clinton won't win by appealing to the mostly mythical swing voters, but she will win if she if she can generate excitement amongst liberal voters and turn out the vote. By getting her on the record about issues like income inequality, Sanders is doing her a favor that will hopefully turn into votes next November.

If it wasn't for Sanders, it's hard to imagine that Clinton would have come up with her best line of the night: "I’m a progressive, but a progressive who likes to get things done." That's exactly the sort of thing Democratic voters want to hear. If she keeps it up, she'll be formidable both in the primaries and in the general election.