The real reason Hillary Clinton won the debate: No one else was on her level

Clinton turned in a solid debate, but was aided by her opponents' weak performances on the big stage 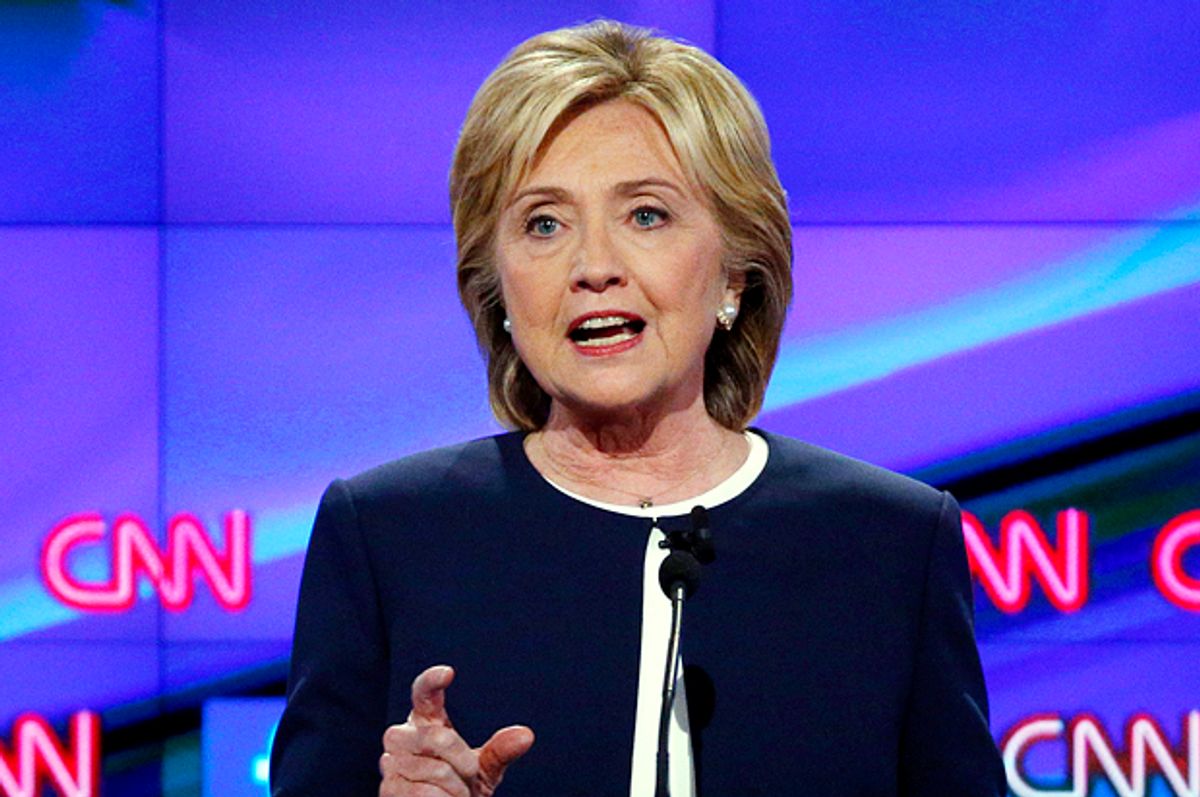 Jim Webb killed a man. CNN’s Anderson Cooper asked him, as he had asked all the Democratic candidates on stage for their first 2016 debate, which enemy of theirs they were most proud of, and the former Virginia senator just came right out and said his best enemy was the Vietnamese soldier who lobbed a grenade at him, and who then was killed by Jim Webb. It was a terrifying moment. Webb wants to be president, and he was up there on stage telling a grim joke about how his enemies die by his hand.

That bizarre moment was nonetheless probably the high point for Webb’s debate performance, given that he’d spent much of his speaking time to that point complaining about how he wasn’t getting any speaking time. He managed to perform only slightly better than former Rhode Island governor Lincoln Chafee, who evinced the seriousness and gravitas of a confused ferret. Chafee explained at one point that he shouldn’t be held responsible for a 1999 vote to deregulate Wall Street because he was new to the Senate and his father had just died and he deserved a do-over. That these two numskulls together represented a full 40 percent of the debate participants helps to explain why Hillary Clinton was the runaway winner of the first Democratic debate.

I’ll give credit where it’s due: Hillary turned in a solid performance. It was clear from the outset that she was easily the most practiced and capable debater on the stage, which makes sense given that she’s done this about 300 times. She had effective retorts for pretty much every challenge the moderators and her opponents tossed at her, and she has an easy command of a broad range of policy issues. But that’s not to say that she dominated the event entirely with her own rhetorical skills and argumentative chops.

It’s easy to pick on Chafee and Webb because they’re clowns who aren’t actually running for president. The two candidates who really needed to seize this opportunity were Bernie Sanders and Martin O’Malley. They each gave passable performances, but neither presented the sort of threat to Clinton that Obama was in 2007 and 2008.

O’Malley had been hyping this debate as the real start of the Democratic primary, but didn't really do much to assert himself. Instead he came off as a sort of affable nerd, a soft-spoken technocrat who offers compelling policy solutions (his aggressiveness on climate change deserves more attention than it gets) but doesn’t offer much in the way of passion or inspiration. His best moments were when he stood up for the children of undocumented immigrants (he signed a state-level version of the DREAM Act in Maryland) and when he invoked the families of victims of gun violence to call for “comprehensive gun safety legislation.”

Sanders did better than O’Malley, but he got tripped up early on when Clinton and O’Malley tag-teamed him on gun control, which is a bit of a complicated issue for Bernie. When the debate was focused on the issue areas that really get Bernie going – economic inequality, Social Security, wage growth, and jobs – he was on his game. When it came to foreign policy, he seemed a bit lost, though he did a tremendous job of politely tearing apart Anderson Cooper’s ridiculous question about whether he could be a credible commander-in-chief given his conscientious objector status during the Vietnam War.

But while Sanders and O’Malley were offering hit-and-miss performances, the heavily favored frontrunner managed to glide along without much in the way of turbulence. And she had such an easy time of it because Sanders and O’Malley declined to hit some real points of contrast. On Social Security, Clinton offered a cagey and evasive answer as to whether she’d expand it, which would have seemed like an excellent moment for Sanders to jump in and press her on what her vision is for the crown jewel of progressive social welfare policy, but he laid off. On Syria, Clinton’s support for a no-fly zone over Syria – which puts her at odds with the White House and her 2016 opponents – was hardly touched upon. O’Malley noted briefly that it could lead to an “escalation” with Russia, but left it at that. Sanders simply observed that a no-fly zone “could lead to real problems.” No one seemed to have much appetite for pressing Clinton on her hawkish instincts, even though that’s what landed her in trouble the last time she ran.

And so Clinton won the first debate. She did well herself, and she lucked out in that no one went hard after her own vulnerabilities. Perhaps as the candidates get more comfortable in debate settings they’ll make things a bit more interesting for her. Or maybe we’ll just get more Jim-Webb-killed-a-guy stories.