"We had this period of peace and prosperity, and what did we do with it?": Historian Gil Troy reexamines the Clintons and the 1990s 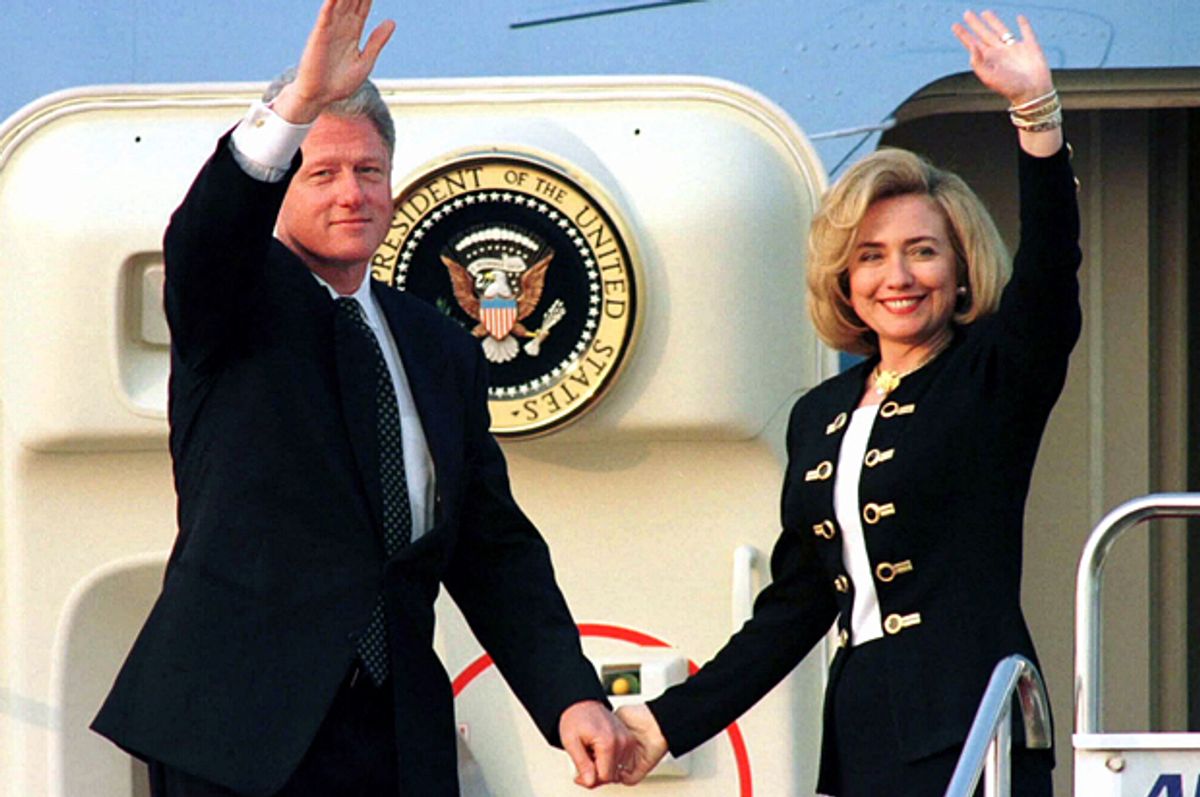 Despite Sen. Bernie Sanders and Donald Trump’s early campaign success, it remains overwhelmingly likely that either Hillary Clinton or Jeb Bush — or both! — will be a major party’s presidential nominee in 2016. Consequently, it is almost guaranteed that next year’s presidential race will be, at least in part, a referendum on the 1990s.

Twenty years is not such a long time, really, so you might figure there’s little to reassess. But as historian Gil Troy's new book, “The Age of Clinton: America in the 1990s," reveals, just because a time period is in our living memory — just because we ourselves experienced that era, first-hand — that doesn't mean we necessarily understand it. And while Troy's book touches on many of the signal moments of the decade (from the rise of Clinton's "new Democrats" to his becoming the second president in U.S. history to be impeached) it also reveals our recent past, and perhaps our near-term future, in a new light.

Recently, Salon spoke over the phone with Troy about his book, the man at its center, the decade it explores, and how many of the problems that define our politics today can be traced back to the Clinton era. Our conversation is below and has been edited for clarity and length.

There’s this idea that the ‘90s was a sort of quiet moment in U.S. history, the interregnum between the Cold War and the post-9/11 era. So why do you think the ‘90s matter enough to deserve a book-length analysis?

The ‘90s matter because even though it became a cliché and a bit of a joke when Bill Clinton kept on talking about building a bridge to the 21st century, the truth is that in many ways the 1990s invented our times.

If you go back to 1990, “Google” was just a big number, “Amazon” was just a river, and “PayPal” was just something that loan sharks said. That's just a little illustration of the kind of the fundamental shifts that were going on in the economy, in the way we approach things in our daily lives. There is a certain sense in the 1990s of it being a bit of a bubble of peace and prosperity; and we realize that, in many ways, many of the problems of the 21st century were also being invented [in the ‘90s]. So I think its important for us to look back and see how we benefitted and also how we're still suffering from some of the mistakes in the 1990s.

Why did you decide to take a methodical, linear approach and travel through the decade year-by-year? What do you think that format reveals that makes it valuable?

Part of it was that I had done it before with a 1980s book, a book called “Morning in America: How Ronald Reagan Invented the 1980s.” I think there are certain presidents that so dominate an era that you can appreciate them both as cultural figures as well as political figures. I would say Franklin Roosevelt for the 1930s; Ronald Reagan in the 1980s; Bill Clinton in the 1990s.

So, having done the book on the 1980s, I was playing with the idea of applying it to Clinton. And, I have to say, originally, I was daunted; because in the 1980s, it was still very much the three-channel [media] universe. It was pre-Internet, and it seemed that, culturally, it was easier to get a handle on the conversation in the 1980s. The 1980s was ultimately a reconciliation with, and a reaction to, the 1960s. It was kind of America figuring out where we were going to go in the wake of such massive change.

Then why is there this sense of the Clinton presidency as somehow ho-hum? When President Obama was still a senator and was running for the Democratic nomination, he famously (and strategically) said he wanted to be like Reagan — and not like Nixon or Clinton. The implication was that Reagan changed the country whereas Clinton merely acted as a caretaker. Why is that the wrong way to see the Clinton administration?

If you read Bill Clinton — the transcripts of his speeches from the 1980s, his presidential [campaign] announcement address — you realize that Clinton had a take on America and politics that was as visionary and as ideological as Ronald Reagan. But Bill Clinton was part of this Democratic Leadership Council which was — in the wake of the 1960s and the great crime wave and three losing presidential campaigns (‘80, ‘84 and '88) — trying to fix liberalism’s problems. They were trying to fix the Democratic Party.

Once you realize that Clinton is not just a finger-to-the-wind leader but actually had a take, that helps you explain why this liberal Democrat was fighting crime in the way that he was doing. It helps you explain why in 1996 this liberal Democrat is pushing the welfare reform. Clinton, like Reagan, had his limitations; Clinton, like Reagan, wasn't always consistent. But he was trying to do something, and he had an [ideological] anchor. He had a lodestar. And so that's the first piece that makes [him] “transformational.”

And what’s the second?

The second is that Bill Clinton and Al Gore, more than most, really understood what I call the “Great American Hookup.” They really understood that this connection of computers to the Internet was going to change our lives. And if we had a kinder political culture, we wouldn't always be so nasty about Al Gore “inventing the Internet.” Because, in many ways, he did. Obviously, he didn't do the technology; but in the late 1970s and the early 1980s, [he was] recognizing that there are massive changes afoot, and he's pushing Congress to facilitate that.

So you see what Clinton and Gore were trying to do — they were looking ahead. They realized that [the Internet] was going to change our economy, family lives, ideology and culture. So I give them a lot more credit than I think most people do for recognizing this tremendous tsunami of change and trying to help mitigate some of the negative effects and also maximize some of the positive effects.

Let’s take a step back and talk about something you mentioned already, which is Clinton’s policy on crime. A lot of lefties see the Clintons’ support for “tough on crime” laws as a negative mark of their legacy. Clinton himself has even said he regrets elements of the '94 bill. Can you give me a sense, though, of what the politics of crime felt like at that moment? I think a lot of people — especially people around my age, who never really experienced it don’t realize what the political atmosphere was like.

Let me frame [my answer] by first saying that I completely understand and empathize with the pain not just in the African-American community, but in the entire country, over incidents of police abuse, police brutality, and the cutting short of lives. It’s tragic. But I also think it’s a huge mistake for the [Hillary] Clinton campaign — and, in some ways, for the country — to repudiate one of the real signature successes of the 1990s and the Clinton administration.

Starting in the 1960s, you have this tremendous epidemic of crime. And this goes on through the '60s, '70s, and '80s. Americans don't feel safe at home; Americans don't feel safe walking the streets. In addition to that, the news is increasingly getting nationalized; so someone gets abducted in Utah, and people in Missouri are in a panic. And on top of the crime problem, there's a growing crime obsession (which some people see as simply a [race] issue).

Bill Clinton felt the crime problem, he witnessed the crime problem, and he saw that it wasn't just a [race] problem. In many ways, blacks were disproportionately suffering from crime. Clinton understood that unless Americans started feeling safer, and unless they started perceiving Democrats as leading the fight against crime — not just excusing crime as the result of social injustice (which is ultimately, in some ways, blaming the victim) — the Democrats would never succeed.

Because of his Southernness — and because of his real connection and deep ties to the African-American community — Clinton was able to start a conversation with African-Americans that wasn't just finger-pointing; which wasn't just saying, “You're the cause of the crime problem.” Because far more crimes are committed by whites than by blacks; and African-Americans suffer disproportionately from the crime. Clinton was able to diffuse some of the ugly racial dynamics and focus on the problem. (Not completely, obviously.)

And is the story pretty much the same with welfare reform? That hasn’t gotten as much attention from the general public as has criminal justice reform, but left-of-center wonks have begun reassessing that legacy, too.

So welfare reform is one of those anchoring positions of the Democratic Leadership Council and the Clinton campaign. But I should point out that the Clinton White House had a huge civil war go on between the DLC/Clintonite centrists and the more traditional liberal Democrats. The centrists really feel that unless Bill Clinton faces the American electorate in 1996 having done welfare reform, people are going to look at him as a hypocrite. Because in his 1992 campaign, he had promised welfare reform as proof that he was indeed a "new" Democrat.

My last question is about your idea that many of the problems vexing us today find their roots in the '90s. Which issues do you have in mind?

First, despite the illusion that the 1990s was the peace and prosperity decade, there's pretty much massive denial about the growing threat of Islamist terrorism — and this is a bipartisan failure. If you look at the 2000 campaign, reporters weren't asking about this. When Bill Clinton did occasionally go after Osama Bin Laden, it was not popular; and he was worried about a backlash, both in the international community and also at home.

Because we were so into what you alluded to earlier, which was the narrative of the end of the Cold War, this golden era of peace.

Second is that while there was an amazing surge in the stock market and genuine prosperity, there were certain structural problems within that economy, a growing gap between the very wealthy and the rest of us; a growing abstraction in the market which would lead to this whole problem of mortgages and derivatives. Democrats were really pushing for a much broader access for all to get housing, a lowering of mortgage standards; and lo and behold, it took a while, but in 2008, it fell apart. So the failure to go after terrorists was a bipartisan failure, and the failure to build a stable economy is also a bipartisan failure.

Third is the emergence of this bitter, growing divide between Republicans and Democrats. The model of Orrin Hatch, the conservative Republican, and Teddy Kennedy, the liberal Democrat, being friends is increasingly lost. There's also the rise of C-SPAN, Newt Gingrich, etc.; things that we're still contending with.

And last is this general cultural issue where America is becoming more "liquid." Change, instability, the loss of tradition is undermining the more solid, more traditional America; and this "liquid America" leads to this notion of: Who are we? What are our core values? What are our core standards? It's wonderful to live in "a republic of everything," which is so welcoming, so tolerant, so much more accessible for African-Americans and for women and gays and immigrants; but there's a generalized American fear — even including those minority communities — of how we also become "a republic of nothing."

And then of course on that awful, horrific day of 9/11, many Americans will wake up and look back and say, “We had this period of peace and prosperity, and what did we do with it?” And that has persisted through the 2008 crash, and through the challenges of the Obama presidency.