Rand Paul's moronic views on LGBT discrimination: Go ahead and get fired for being gay, "there are plenty of places that will hire you" 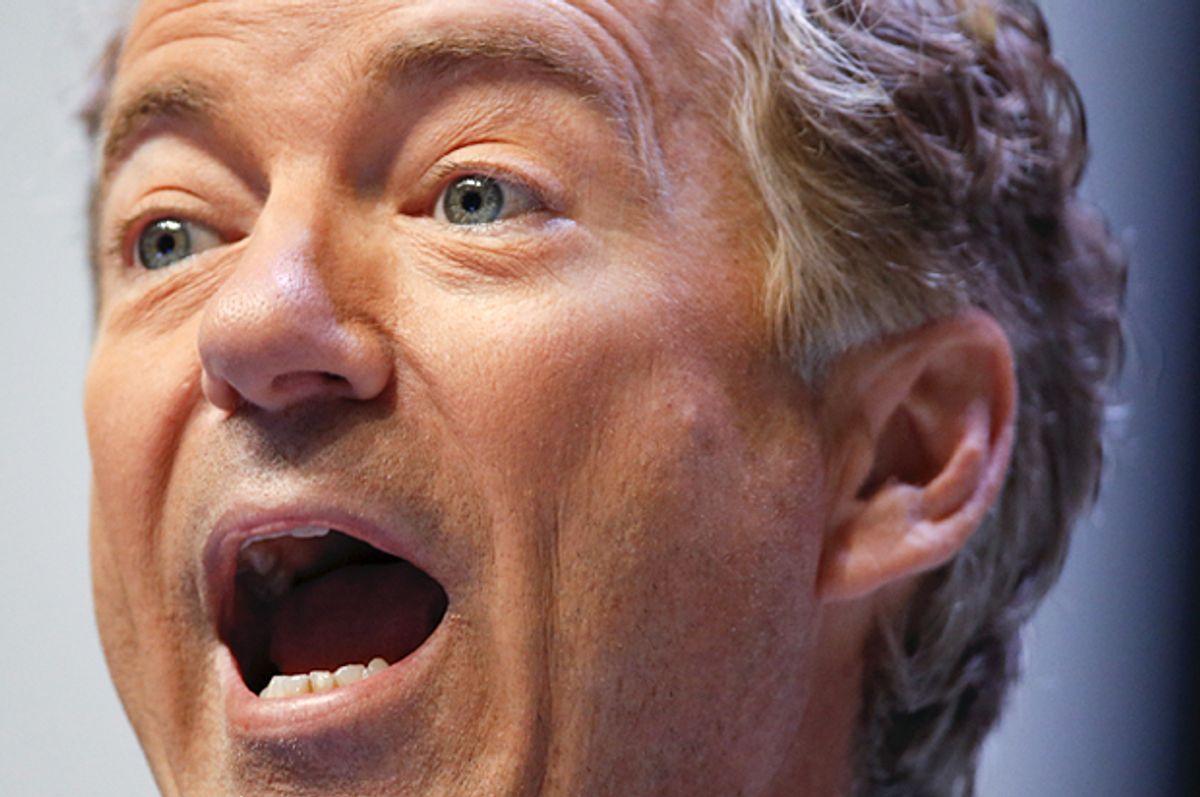 It's getting to the point where it's almost — almost — comical how the guys we all forgot are still technically trying to become the Republican candidate for president have just stopped even trying to pretend they're anything but hateful, clueless dorks. Mike Huckabee is making racist cracks on Twitter, Ben Carson is making you rethink everything you ever believed about the intelligence of doctors and Ted Cruz can't even get next to Kim Davis. And then there's Rand Paul. Sad, sad, Rand Paul. He's not just anti-LGBT — he's anti-coherent sentences.

At a Drake University event Wednesday night, the opinionated ophthalmologist proved yet again he should have just stuck to doing LASIK procedures when he fielded a question from an audience member who asked, "Do you think an employer should be able to fire an LGBT employee because that person is LGBT?" If you have a lick of common sense, the answer to this should be an obvious and forceful, "OH HELL NO."

But not to Rand Paul, who replied, "I think, really, the things you do in your house, just leave those in your house and they wouldn’t have to be a part of the workplace, to tell you the truth." He went on to say, "These are very difficult decisions, on what you decide will be employers' decisions and not. And it really isn't so much about that question as it is about that it sets a classification, or a class of people, who can now sue." And then for the kicker, because he just couldn't stop talking, he concluded, "I think society is rapidly changing, and if you are gay, there are plenty of places that will hire you." What in the literal hell.

I don't even know where to begin with the pure idiocy of Paul's reply to a question that simply required a straightforward "No." Let's start with his assumption that if gay people would just confine their gayness to their homes — like maybe their closets — this wouldn't even be an issue. Here's an easy want to tell if your attitudes toward LGBT people are dumb and offensive: Imagine saying that crap to a straight person. Do you leave your straightness "in the house?" It kind of comes along everywhere you do, doesn't it?

Paul makes the still distressingly prevalent case that if gay people could just be somehow less gay, workplace discrimination wouldn't exist. He then goes on to try to justify discrimination: "You know, people don’t put up a sign saying, 'I’m firing you because you’re gay.' It’s something that’s very much disputed."

That wasn't the question. The question was clearcut. It was not, "Should companies ever lay off gay people?" because of course they do, just like they do straight ones. The question was: Does an employer have a right to terminate a person's job because of his or her sexual orientation? Again, the correct answer is no.

But the real doozy was when Rand said that if you're gay and you get canned for being gay, don't sweat it, because "plenty" of places will hire you. Does Paul think that if you're fired for your sexual orientation, you can just go on Gay LinkedIn and get a job as — what would he think? — a hairdresser or sassy best friend? Or, if you're a lady, a professional folk singer? Does he think there is a gay job sector? Or does he think that a person's ability to find alternative employment justifies anyone else's discriminatory behavior? It's kind of like saying to black people, hey, there are other water fountains, what's the big deal?