For starters, the road trip sequence of this confusing, frustrating 2005 film is actually sheer brilliance 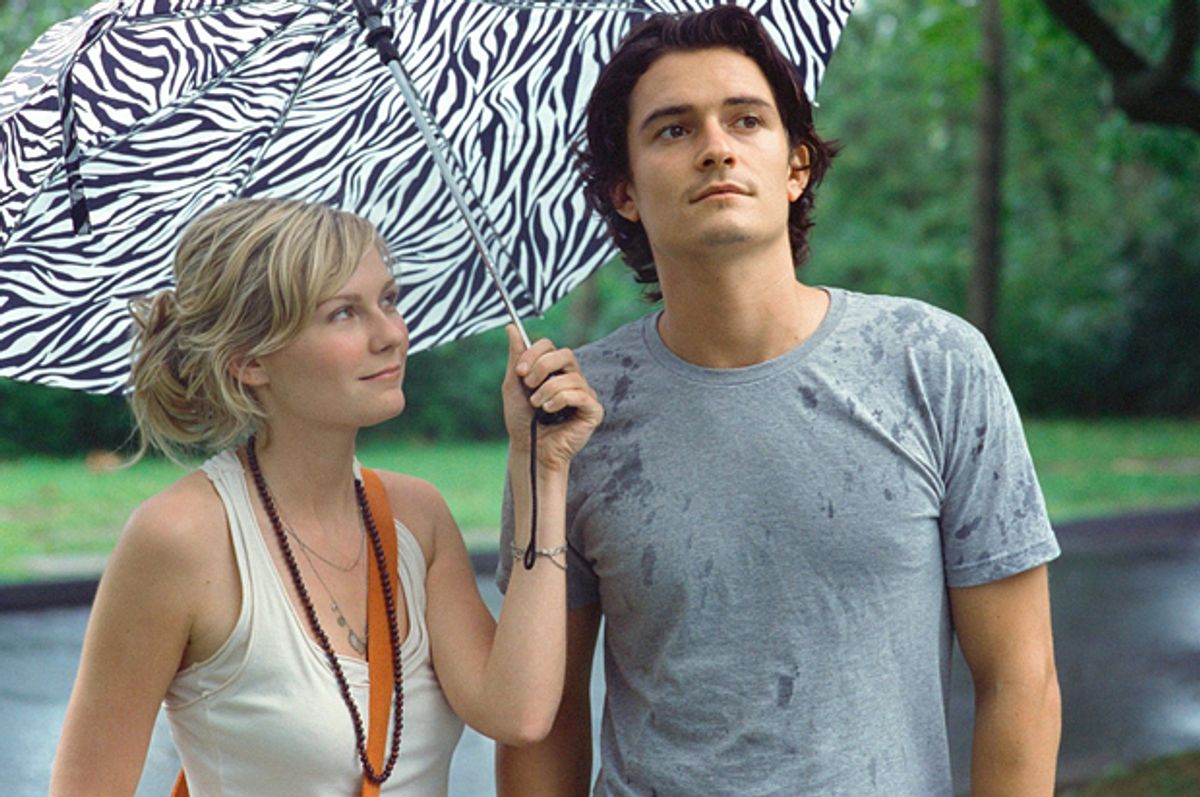 “As someone once said, there’s a difference between a failure and a fiasco,” Orlando Bloom’s aloof sneaker designer Drew Baylor muses as he begins to awaken from an eight-year trance that left him estranged from his warm family and bound only to a beautiful co-worker (Jessica Biel). Ten years ago this week, Cameron Crowe’s "Elizabethtown" opened to almost unanimously negative reviews, which haven't abated in the last decade. But it wasn’t just a critical failure (commercially, it actually made a little profit). "Elizabethtown" was a fiasco.

While there have been “Manic Pixie Dream Girls,” or slightly-written budding earth-mother characters who really only function as tools to help a gifted male lead grow from child to adult (Geena Davis won an Oscar for playing one in 1988’s acclaimed "The Accidental Tourists") for decades, film critics (and I do not consider myself one) seized on Kirsten Dunst’s awkward, too-perfect flight attendant Claire, and one scribe (the AV Club’s Nathan Rabin, a really good writer who was almost certainly not out to coin a phrase) gave the type its name. Every screenwriter (especially the dudes) has checked their heads ever since. It’s amazing Final Draft hasn’t developed a Manic Pixie warning in its updated software. Was Rabin's a fair hit? Certainly. (“I can’t help helping,” she confesses at one point). Dunst is a rock boy's dream. She has a steady job, but unwinds in a Maker’s Mark t-shirt, listening to stacks of CDs. She’s true blue, but willing to stay the night in Drew’s hotel, order room service and do the walk of shame.

Were Renee Zellweger in "Jerry Maguire" and Kate Hudson in "Almost Famous" also Manic Pixie Dream Girls? If so, nobody called Crowe out for it. Were they simply better at hiding it than Dunst? (Hudson’s Penny Lane, aka Lady Goodman, declares herself a “Band Aid” so that nobody, least of all a critic, can call her anything else.) Or were those films just far superior? "Jerry Maguire" and "Almost Famous" were Oscar winners, and the former even launched two phrases — “You had me at ‘hello,'” and, of course, “Show me the money!” — into the AFI-approved vernacular, which gives Crowe one up on Rabin as far as immortal phrase-eology goes.

The thing is, I know Jerry Maguire. I’ve met him before. And I have had the gift (maybe the curse, given my bank balance these days) of actually living out "Almost Famous." I got hired by a print music magazine back when they were nearly as thick as fashion magazines, and someone paid me to go on tour with bands. I had health insurance and a 401k option … as a rock writer!

Crowe was not only familiar, he was a hero to most of us: The wunderkind who sat with a coked-up David Bowie and earned the trust of the notoriously suspicious Led Zeppelin and the king piss-taker Lester Bangs. He thought up and wrote down the “Moving In Stereo”/Phoebe Cates swimming pool scene. If he’d died in ’83, there’d be no "The Wild Life," first of all, but he’d still be a legend, one of the few rock writers, like Bangs and Nick Kent, who seem more like bands themselves.

The thing is, I find my favorite bands more interesting these days when they produce fiascos. This may be a byproduct of getting older, more jaded or wise, depending — but I do not know about "Elizabethtown."

One minute I'm cringing (Susan Sarandon’s stand up/tap dance routine at her husband’s memorial comes to mind) and the next I'm rooting for Drew and Claire. The film has its romantic comedy triggers (“Come Pick Me Up,” Ryan Adams’ wearing and tearing signature song, plays over a “getting to know you” montage) but its usage of an Elton John song (“My Father’s Gun” from the perfect "Tumbleweed Connection") is so much spookier and affecting than the now iconic “Tiny Dancer” sequence in "Almost Famous." Drew doesn’t know his family. He’s been in front of a computer for nearly a decade, and now he’s in the titular Kentucky suburb to dress his dead father in a blue suit and bring him home. He doesn’t even know the old man. As Elton sings, Drew stares into the coffin at embalmed dad (we get a corpse POV) in wonder and disgust. The emotions the "Almost Famous" sequence provokes are uniform — rock and roll is great; life is a trip; roll on, boys and Band Aids. This scene has weight.

The song continues as Drew is welcomed by his distant Kentuckian relatives, including a pre-fame Paula Deen and Loudon Wainwright III. A small child feeds a pair of twin, salivating dogs a big, glistening country ham and they tear it to pieces. (Also, did I mention Paula Deen?) Crowe’s mother, as she usually does, appears in there somewhere. It’s Polanski and Fellini gothic and one of the darkest Elton John songs. Who doesn’t know what it’s like to feel like an utter stranger among your kin? In "Almost Famous," while among strangers, Kate Hudson assures Patrick Fugit’s William Miller, the Crowe stand-in, that he is “home” with them. Bullshit —I know because I’ve been there. Home is where the ham is.

So if Crowe is a band, "Elizabethtown," whose Rotten Tomatoes and Metacritic numbers are seriously low, could very well be his "Self Portrait," "Bitches Brew" or "Berlin," his "Some Time in New York City," his "Trans," his "Kid A," his "Get Behind Me Satan": Albums that threw fans a big, fat curveball when they expected more of the same old moves. Most didn’t swing at it. I didn’t at the time, either.

I remember, still besotted by "Almost Famous," railing first against "Vanilla Sky," his follow-up. I was sitting with a gaggle of rock writers, many of them well known at the time (there was a time) in a downtown bar wondering who the hell Crowe thought he was serving up an art film about virtual reality and cryogenic science with Spiritualized and post-Britpop Radiohead on the soundtrack. This wasn’t post-funeral comfort food. Tom Cruise, whose star power pushed the film, like "Jerry Maguire," into blockbuster status, spends a lot of his time wearing a mask, or deformed. Today, I realize that "Vanilla Sky" is another incredibly brave move for both Cruise and Crowe (who at that time literally could have done whatever they wanted together and gotten it funded). "Jerry Maguire" with a deformed face! Cameron Diaz as a murderous, spurned lover. Jason Lee with … a beard. Okay, some things can’t be fucked around with.

Of the two, I still prefer "Elizabethtown," with all its disorienting and often pitch-black textures (early on, Bloom, Mr. Lord of the Rings heartthrob, intends to stab himself with a self-rigged hybrid of an exercise bike and a serrated knife). It’s streaming on Netflix, and if nothing else, you will witness the birth of another immortal: Alec Baldwin’s Jack Donaghy. A full year before "30 Rock," you can see Baldwin sculpting the clay with his early cameo as “Phil,” the guru of a Nike-like footwear giant, strolling the campus and uttering lines like, “My global environmental watchdog project will have to go. Sweet people. We could have saved the planet.” No disrespect to Tina Fey, but watch these scenes and tell me that’s not Jackie Boy.

I am going to also stick my neck out here — as Crowe has shown us, fortune rewards the bold — and say that the film’s final 15 or so minutes, the road trip sequence, is maybe the best thing he’s ever done.

It's amazing Drew's legs still work, having sat at his console for so long, but he's persuaded to drive (with his father’s urn strapped into the passenger seat) back home and make stops through the Kentucky they call “God’s country,” as well as Memphis. It’s magical realism: Bloom and Dunst narrate, and we are supposed to believe that she has timed her series of mix CDs to each quarter-mile perfectly — and coordinated “Pride (In the Name of Love)” to play just as wide-eyed, now fully-liberated Drew scatters parts of his dad in front of the Lorraine Motel Civil Rights Museum. And you will.

Had this sequence alone been released today as a digital short, it probably would have been nominated for an Oscar. But as it is, it’s the last pre-MP3, pre-GPS romantic road trip film sequence, probably for all time. Any attempt to recreate it would have to be a period piece.  I say it’s stunning, maybe because I, like Crowe, wish someone would do something like that for me. Or because I haven’t spoken to my own father in nearly as much time as Drew has been away.

This isn't a romance between the lost boy and his Manic Pixie Dream Girl; it’s Crowe’s own romance with America, not Hollywood. It’s his Lou Reed-ian chomping on the hand that bred, fed and awarded him (“Success, not greatness, was the only God the entire world served,” Bloom says at a point).

Yes, Crowe has been puzzlingly risk-free lately, following this up with the relatively safe "We Bought A Zoo," a documentary on Pearl Jam — who doesn’t love Pearl Jam? Grouches, that’s who — and the romantic comedy "Aloha," (which seemed to disappear overnight, despite its promise of sweet, return-to-form style), but only Woody Allen and occasionally Oliver Stone are better than him at taking major movie stars and allowing them to get in touch with their inner Nic Cages. Now there’s a guy whose snaky curves — "Vampire's Kiss," "Peggy Sue Got Married"— are more interesting than his by-rote, hit-this fastball runs. And in an age of all-Marvel-everything hits, we need our frustrating, intriguing fiascos.