Fox News gets suckered: 11 outrageous lies by their "terror analyst" who was actually a con man 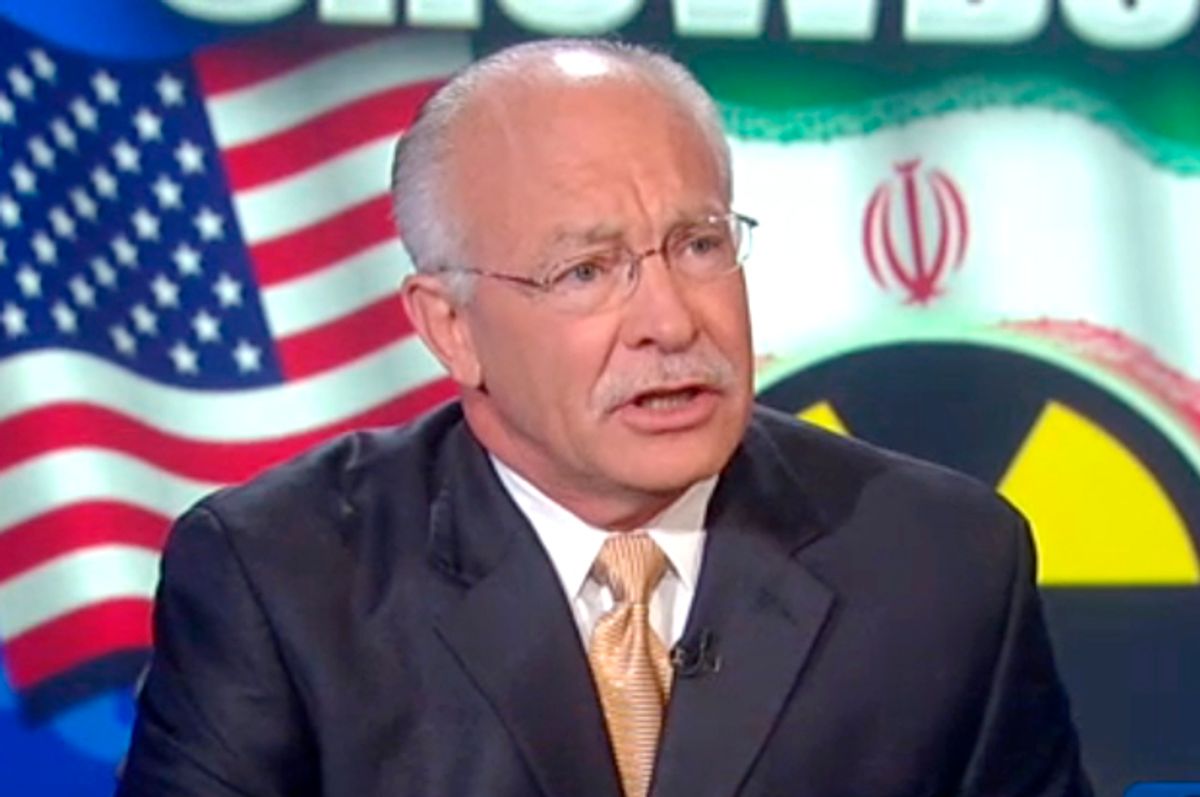 Surprise: One of Fox News' most popular so-called "terror analysts" was actually a con man.

Con artist Wayne Simmons created an elaborate life story. It is fake. He identified as a CIA outside paramilitary special operations officer. He wasn't. He wrote a book claiming he worked in the CIA for 27 years. He didn't.

Fox News took him at his word. So did the U.S. government. Simmons worked as a subcontractor for the government multiple times, and was even invited to train at an Army facility. He ended up receiving security clearance and served as an intelligence advisor to senior military personnel overseas. So much for background checks.

Simmons' website is chock-full of articles, media appearances, and "patriot pictures." He even has a page devoted to patented credit card technology called HADRiAN he claims to have created with a Delaware company that is actually in New Jersey.

To say Wayne Simmons is a suspicious character would be to engage in understatement. The feds could tell. A federal grand jury indicted him on numerous counts of fraud and making false statements.

This doesn't undo the damage Simmons has already undone, however. For what is even more disturbing than the fact that he deceived the media and the government for this long is the fact that Simmons used his faux-authority to spread ludicrous and jingoist right-wing propaganda.

For 13 years, Simmons ceaselessly spewed unsubstantiated opinions on Fox News, under the facade of being a CIA veteran and "national security and terrorism expert."

The following are just 11 of the preposterous things Fox favorite Wayne Simmons -- a snake oil salesman who peddles odious lies and fear -- proposed and claimed:

In 2011, Simmons insisted on Fox News that the U.S. government should racially profile people from Muslim-majority countries. Calling himself a "pro-profiler," Simmons proclaimed "I am just adamant about profiling, and we need to do it."

When Senator John McCain proposed, in Fox's words, "banning some immigrants from radical countries," Simmons replied "I think it's a great idea; should have been done years ago."

Simmons claimed on Fox News in early 2015 that there are "at least 19 paramilitary Muslim training facilities in the United States," where Muslims are being trained to carry out terrorist attacks on Americans. As a source, he cited Islamophobic right-wing propaganda outlet the Clarion Project.

While spreading flagrantly false rumors about supposed "no-go zones" in Europe in which non-Muslims are not allowed to enter, Simmons warned viewers "We are in a global war, a global war against Islamic jihad."

Simmons called for the U.S. government to assassinate democratically elected Venezuelan President Hugo Chávez in 2005. "If a stray bullet from a hunter in Kentucky should find its way between this guy's eyes, no American should lose any sleep over it," Simmons quipped.

Fox News hosts Sean Hannity and Alan Colmes egged him on. "Do you want him dead?" Colmes asked, referring to Chávez -- who was democratically elected numerous times and was, by far, the most popular leader in Venezuela's history. "Absolutely," Simmons replied. "He should have been killed a long time ago... It doesn't matter to me who kills this guy. He's to go." Simmons even went so far, at the nudging of Hannity and Colmes, to compare the Venezuelan president to Hitler.

Simmons frequently called for bloodletting on air. On Fox News in 2005, he asserted that American "traitors" should be executed by "firing squad."

Fox host Alan Colmes asked "You want America to have firing squads?" Simmons replied "You doggone right I do, for traitors, that's absolutely what they should have."

On Fox's Freedom Watch in 2010, Simmons called whistleblowing journalism organization WikiLeaks "a terrorist organization." Simmons accused WikiLeaks of "hiding behind" the First Amendment in order "to come against the national security of the United States."

The Fox host characterized WikiLeaks and those who leaked to it as "threats to America." He also introduced the con man saying "Wayne Simmons, you are a former intelligence agent of the USA who risked his life for national security and other laudable purposes; you also took an oath to uphold the Constitution."

When weapons of mass destruction weren't found in Iraq, Simmons happily went on Fox in 2007 to claim they could have been hidden in other Middle Eastern countries, namely in Syria or Lebanon.

Simmons was still riffing on this groundless ruse in 2013. He told Fox News that there was a "very high probability" that the late Iraqi President Saddam Hussein had hidden WMDs in Syria.

Simmons always came out to bat for mass surveillance. When, in 2006, the FBI admitted that a supposed terrorist plot to attack NFL stadiums was a "hoax," Simmons claimed on Fox News that this was "the perfect example of the president's Military Commissions Act of 2006 and the NSA terrorist eavesdropping program, how vital they are. Without them, we cannot, as the president wants us to do, pre-emptively strike the terrorists."

The other guest on the program at the time, Frank Gaffney, founder and president of the right-wing Center for Security Policy think tank, fearmongered about so-called "Islamofascists," who he insisted "are determined to kill as many of us as they can." In a sigh of relief, Fox News host Neil Cavuto declared "We dodged a bullet here, or presumably a hoaxed bullet, but still."

In 2005, on Fox News' The O'Reilly Factor, Simmons claimed that if "the Democrats come into power in the United States and re-employ their vision of defense for this country, we will have 9/11s unabated."

"This will absolutely be proven to be fact," Simmons insisted. "That's not maybe," he warned.

When Democratic Congressman John Murtha criticized the Iraq War in 2006, Simmons said a "psy-ops, or a psychological operation, in and by itself, can decimate the enemy if it's run correctly. The problem is Murtha's running a psy-op against his own people and against his own military."

"The terrorists know that they have the press and they have the ACLU in their pocket" Simmons stated on Fox News in 2005. He maintained that news outlets like The New York Times and The LA Times, along with NGOs like the ACLU, were helping terrorist groups by reporting on or criticizing the U.S. government's illegal torture program.

In 2011, Simmons was invited on Fox to discuss U.S. military involvement in Pakistan. Fox introduced Simmons as a "former CIA operative who knows the area well," and asked the con artist to comment on military policy. Naturally, Simmons insisted that the Obama administration -- which for years had conducted a covert drone war there that left thousands of people dead, including hundreds of civilians -- was not being aggressive enough.

Conspiracy-theory style, Simmons speculated that the White House had ordered General Petraeus to downplay the threat of terrorism in Pakistan in order to "help soft sell the eventual withdrawal."

For 13 years, Simmons always came out with guns blazing in defense of conservative causes. There are bound to be countless more examples of the con man giving credence to baseless right-wing myths.

Wayne Simmons is a paragon of the fraudulent "terrorism expert." Pulitzer Prize-winning journalist Glenn Greenwald has pointed out that there are essentially no official standards in the U.S. media by which "counter-terrorism" pundits' purported "expertise" is measured; they must simply ignore facts, blame Muslims, and trumpet U.S. propaganda. Simmons fulfills each of these preconditions and more.

The question everyone should now be asking is how many more Wayne Simmons are out there?