Ian McKellen on playing straight: "Heterosexuality is far too interesting a phenomenon to be ignored" 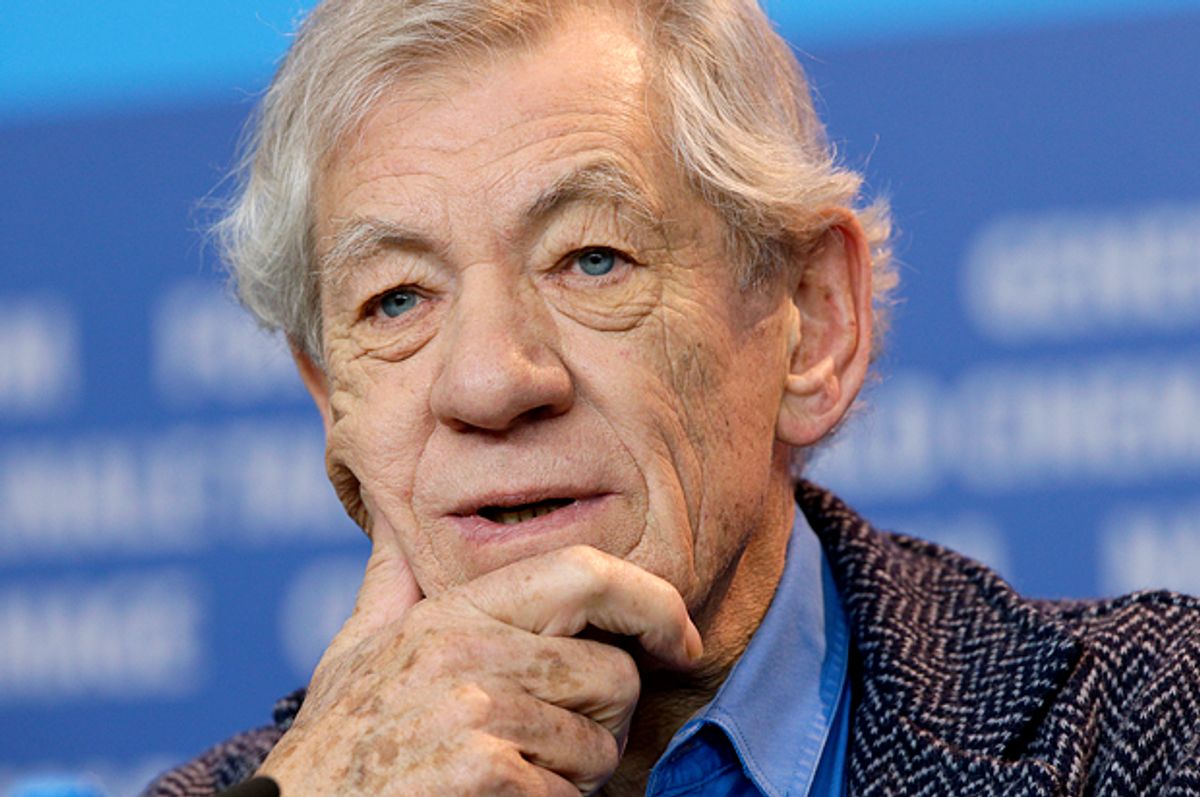 Sir Ian McKellen has had a pretty terrific year. He received warm accolades for his turn as Sir Arthur Conan Doyle’s famous detective in “Mr. Holmes,” a film that reunited him with his “Gods and Monsters” director, Bill Condon. “Mr. Holmes” has been one of the year’s highest grossing independent films, most likely because of McKellen’s participation. He has those qualities of intelligence, introspection and dry wit that make him perfectly suited to the role.

The actor also just finished the second season of “Vicious,” playing the gay, egocentric actor Freddie Thornhill. In the show, Freddie and his longtime, long-suffering partner Stuart (Derek Jacobi), contemplate marriage. The series, which has a quaint, old-fashioned style to it, reunites McKellen with Jacobi, as well as co-stars Frances de la Tour and Marcia Warren, all of whom have worked with McKellen on stage in the past. Their familiarity drives much of the show’s humor.

And just this month, McKellen was honored for his career in stage and film and TV with a Lifetime Achievement Award from the Mill Valley Film Festival in Northern California. While at the festival, the actor chatted with Salon about his various projects, being a gay icon and aging.

Sir Ian, you have been performing on stage and in film and on television for over 50 years now. You are now receiving a career achievement award at the Mill Valley Film Festival. Is it all downhill from here? What can you say about the highs and lows of the business?

[Laughs]. I don’t feel much exasperation. It’s been a charm, the last half century. There are things in my life that aren’t as good as my career. I regret only two jobs — and I won’t say which ones — but both were on stage. Film and TV has been very enjoyable. It’s all gone according to plan — not that there was a plan. I’m a happy bunny.

You had a career renaissance on screen in part because of “Gods and Monsters” — and those little films you made, “Lord of the Rings” and “X-Men.” You’re a Royal Shakespeare Company actor. Did you ever expect you’d be making blockbuster CGI spectacles?

No! I did have a plan — get better as an actor rather than get rich and famous. I started in a modest way in the theater. I don’t remember of getting jealous of Tom Courtney, Albert Finney or Alan Bates [who had budding screen careers in the 1960s]. My friends say that’s not true, that I wanted to be in film. It changed with “Richard III,” which I did on stage, and toured in the States. We closed in Los Angeles. I then sent the script for the film version of “Richard III” off, and raised the money to make it, and once that was done and approved, that became a calling card. I was entrusted to work for the camera. That was how I got Brian Singer to cast me in “Apt Pupil” and later “X-Men.” Peter Jackson may have had some desperation that he couldn’t find anyone else to go to New Zealand for “Lord of the Rings.” I always thought it would be appealing to be in a classic film like “Casablanca.” It’s come about. “Lord of the Rings” finds a new generation of fans, judging by the kids who say hello to me.

You reunited with your “Gods and Monsters” director Bill Condon to make “Mr. Holmes” earlier this year. Did you put a bug in his ear to play Sir Arthur Conan Doyle’s detective? How did that film come about?

He called me out of the blue. There’s a line in “Gods & Monsters” that “It’s the most wonderful thing in the world — making movies and entertaining people.” When I went to New Zealand for “Lord of the Rings,” I’d stop by Los Angeles and stay with Bill [Condon] and his partner Jack. We always said we must find something else to do together, and it came about when he brought me “Mr. Holmes.” Now we’re doing our third film together, a live-action “Beauty and the Beast.” I play Cogsworth, the Clock.

On that same point of old friends, let’s discuss “Vicious.” Your character, Freddie, is a vain actor — obviously a stretch for you. What can you say about working on the sitcom and being so bitchy to Derek Jacobi?

[Laughs.] I know! I had to keep saying to Derek, “I don’t really mean it, darling. I love you.” Initially, I thought, "Do I really want to play someone my own age who is gay and an actor and has a vicious tongue?" Derek said he’d play that part, but then I said I’d stick with Freddie. It was a joy to work with old friends. Frances de la Tour and I did Strindberg’s “Dance of Death” together on stage in London. Marcia Warren was understudying Gertrude when I played Hamlet. Once — and it was only once — she went on and played my mother on stage! We decided not to do a third season of “Vicious.” We wanted to leave on a high note. We never saw Freddie and Stuart in bed together, though. I once asked the studio audience if they thought Freddie and Stuart had a double bed or two singles? Unanimously, they said, “Double.” They were two active people still having sex. Freddie and Stuart may be horrible to each other, but they are survivors and heroic.

You have long been openly gay. Back in the early 1990s, you appeared in classic independent queer cinema such as “Ballad of Little Jo,” “Six Degrees of Separation,” and the LGBT-themed TV films, “And the Band Played on” and “Tales of the City.” What can you say about the state of queer cinema, which is changing, but still not completely mainstream?

That’s an interesting question. In San Francisco, I was in conversation with Armistead Maupin, and he talked about coming out. For some gay activists, it is a duty and destiny to eschew the mainstream. I can’t do that. Heterosexuality is far too interesting a phenomenon to be ignored. You can’t play “King Lear” if you are an actor who won’t play straight. I wouldn’t be adverse at all at working with gay people on a queer project. The crew of “Gods and Monsters” was gay, and yet it became a mainstream movie. Some gay people don’t want to get married because they think that’s mainstream. They don’t want to assimilate; they want to be proud of their differences. To each his own, I say. But movies should be about truth, whether they are about gay or straight people, old or young. They will attract my attention as an audience or an actor if the story is well told.

It seems that you are working now more than ever. What observations do you have about your career longevity?

It’s not just actors — everyone is living longer. It’s wonderful that the industry embraces us and lets us get on the screen. I was just watching “The Second Best Exotic Marigold Hotel,” and I kept waiting for me to come on screen. It’s great that all those actors [Judi Dench, Maggie Smith, etc.] are all still in their prime. I never like to think of myself as an old-fashioned actor; I want to be up to date. If I can do films by and for young people, I feel I’ve found a place in society. I do slip into student films that no one gets to see, but that keeps me fresh and young at heart.