Martin Shkreli, poor little rich bro: The most hated man in pharma is "furious" he couldn't meet with Bernie Sanders

The controversial pharmaceutical CEO can't always get what he wants 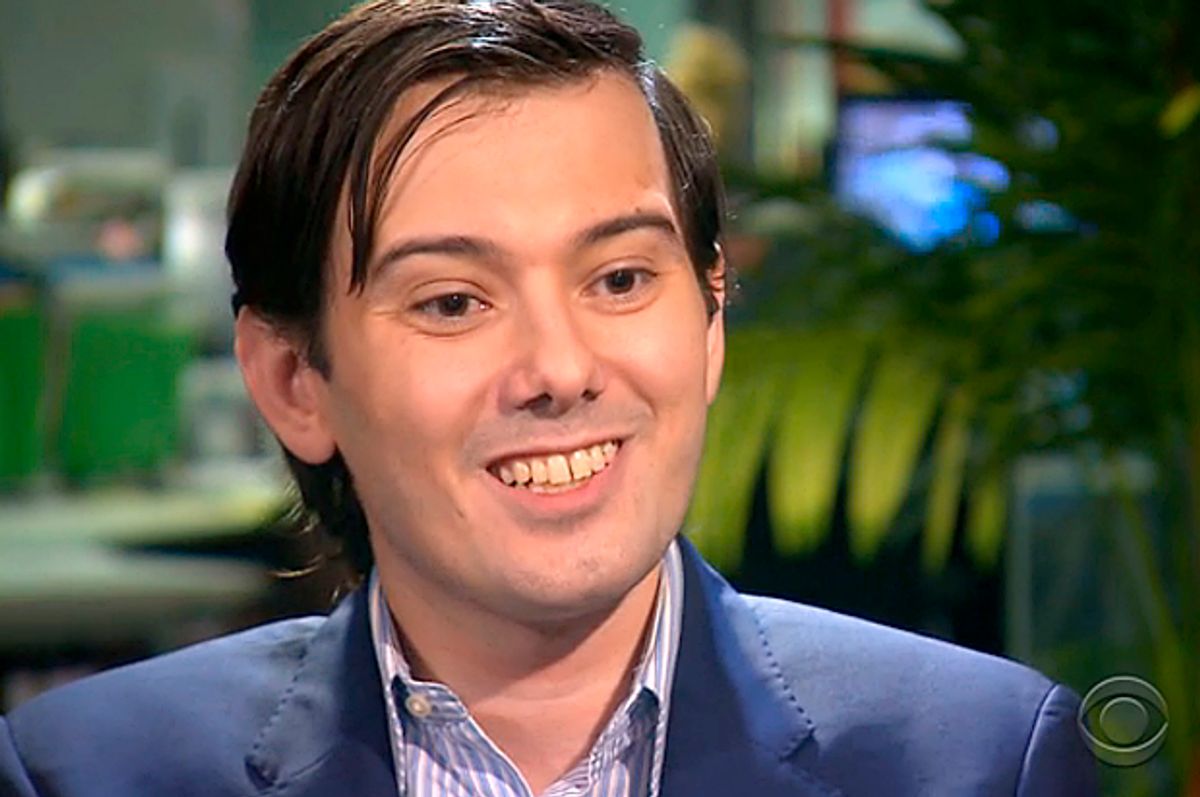 It must be strange, if you're the kind of person who generally believes he can wave his wallet in the direction of something he wants and make it — poof! — appear, when that magic trick doesn't work. When a drunken demand for mac and cheese goes unheeded. Or when a pharmaceutical company CEO gets turned down by a politician. Sorry, Martin Shkreli!

Just last month, Shkreli earned the disgust of a good portion of the Internet — as well as Democratic hopefuls Hillary Clinton and Bernie Sanders — when it was revealed his company, Turing Pharmaceuticals, had raised the price of toxoplasmosis drug Daraprim from $13.50 a pill to $750 overnight. Sanders even wrote a letter to Shkreli, asking for an explanation. But though Shrkreli quickly vowed that "I think that it makes sense to lower the price in response to the anger that was felt by people," no change has been forthcoming. He now says that "Until we figure out demand, we won’t lower the price. We have to find a safe price to lower it to." Seems like something he'd want to get on, soon.

Shkreli has, however, meanwhile managed to find the time to troll journalists  and retweet photos of cats rolling around in money. He also, according to the Boston Globe, "says he has donated to presidential candidate Bernie Sanders — who has been bashing Big Pharma on the campaign trail — to try to get a meeting so the two can talk it out." It did not work out that way.

Shkreli claims he recently donated $2,700 — the maximum individual contribution — to Sanders' campaign. He told the Boston Globe he had hoped for a private meeting with Sanders to explain the rationale of drug company pricing. But on Thursday, the Sanders campaign said they were giving the money to the Whitman-Walker health clinic in Washington, adding, "We are not keeping the money from this poster boy for drug company greed."

And Shrkreli now says he's "furious" over the snub. "I think it’s cheap to use one person’s action as a platform without kind of talking to that person," he says. "He’ll take my money, but he won’t engage with me for five minutes to understand this issue better." And he continues, "I’d ask him, what role does innovation play in health care? Is he willing to sort of accept that there is a tradeoff, that to take risks for innovation, companies have to invest lots of money and they need some kind of return for that, and what does he think that should look like?" I guess you can't always get what you want. Meetings with senators, your toxoplasmosis drug returned to a reasonable cost, that sort of thing.

Shkreli must be growing accustomed to rejection. Last month, the Brooklyn label Collect Records, where he was an investor, announced it had decided to "sever our relationship with Martin Shkreli, effective immediately." Last year, he was fired from the biotech company Retrophin over what the board reportedly judged were "stock-trading irregularities and other violations of securities rules." And now he can't even get Bernie Sanders to sit down with him, even after he tried to give him $2,700. And that, as Shkreli well knows, is practically the cost of a few drops of a 1979 Petrus.

Don't you just love when a hedge fund guy who brags that "I appreciate @BernieSanders using my contribution as a continuation of my philanthropy," and who insists, "Physicians don't share the media/populist idiocy"tries to explain how pharmaceutical prices are set? I mean, sure, you're welcome to get the perspective of a guy currently being sued by his former employer for $65 million, or you could consider the opinions of the Infectious Diseases Society of America and the HIV Medicine Association, who both contacted Turing in September to call the Daraprim price change "unjustifiable for the medically vulnerable patient population." You could note that, relatedly, just this past July a group of 118 prominent oncologists called for reform over the skyrocketing cost of drugs, saying, "This increase is causing harm to patients with cancer and their families."

Research and development are time-consuming and expensive — no one's disputing that. But they can be conducted in ways that are ethical and fair and don't simultaneously abruptly and capriciously penalize people who need medicine. And they really should be overseen by people who know the distinction, not by ones who think their money entitles them to anything, including a senator's time.