Esquire is known for its baffling profiles of women, and this is no exception 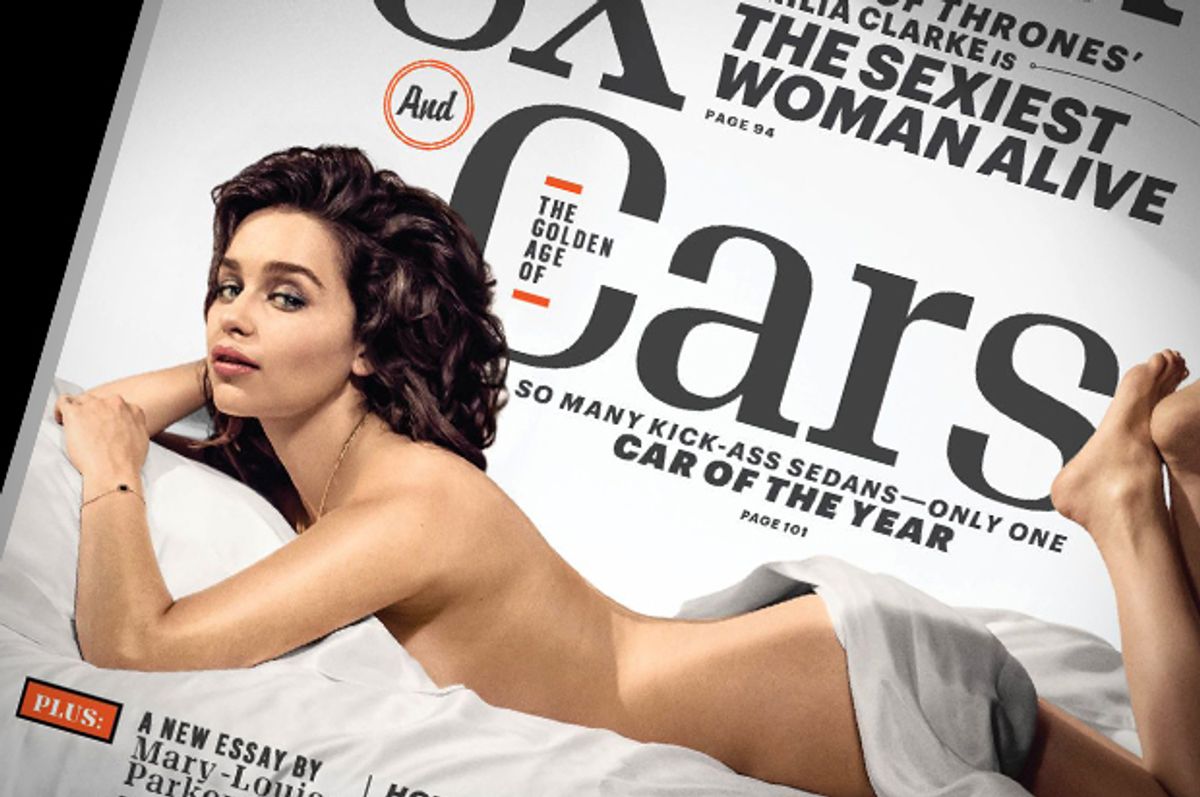 Emilia Clarke on the cover of Esquire
--

Esquire writers tend to get flustered when tasked with writing about attractive women. Chris Jones got so overwhelmed writing about Penélope Cruz last year that he wrote a short story about a bullfight instead. Stephen Marche, all capacity for critical thought evading him, went on a long rant about how Megan Fox is like an Aztec sacrifice, while Tom Junod settled on 9/11 as the reason that "Angelina Jolie is the best woman in the world.”

For exhibit D, we have Benjamin Markovits’ recent profile of “Game of Thrones” star Emilia Clarke, the magazine’s 2015 Sexiest Woman Alive. While it’s not a total journalistic Red Wedding, it’s also another Esquire profile that isn’t really about its subject at all. It does, however, feature this awesome sub-head that makes it sound like a B-movie slasher rom-com.

“FRIENDLY AND FIERCE. KID SISTER AND KILLER. MOVIE STAR AND GIRL NEXT DOOR.”

Unfortunately that’s about as exciting as things get. Early on, the author introduces the premise of the profile, which turns out to be a form of torture far more merciless and cruel than the dungeons of the Dreadfort:

Today she has to hang out with a middle-aged, slightly etiolated Texan she's never met, who is supposed to take her to Crystal Palace to play something called Game of Phones—a Thrones-flavored quiz and treasure hunt put on by a social-networking company called Thinking Bob

Oh god, we’re so sorry about this, Emilia.

We begin with a brief reminder that London ain’t what it used to be, because gentrification is a scourge and blight upon us all.

My taxi pulls up at a house in Hampstead, an inner London suburb. Academics and writers used to live there. Now only bankers and lawyers and movie stars can afford it—you hear a lot of American accents on the street.

This is followed by a tour of the actress’s home, including a vase that is inexplicably described as “funny." The mystery haunts us still.

There's a chesterfield under the window, there are books on the mantelpiece (including the latest Colm Tóibín novel), and a funny/pretty and probably expensive large vase decorating the hearthstone.

The tour also includes lots of local color that would be great in a profile of a "Downton Abbey" star.

The real life in these houses is downstairs, in the basement kitchen, where the servants used to operate.

But of course, the point of the profile is to get to know Emilia Clarke, and we get our first insight into the elusive Khaleesi when Esquire launches into a fascinating digression on Clarke’s love of tea.

It turns out she also has a lot of tea. She opens a cupboard, she pulls out a drawer, both of them overflowing with complicated varieties.

"How do you take it?" she says. "In my family we always argue about the order of pouring. I'm a milk-first kind of girl.”

Now that they’ve got the milk question out of the way, Esquire encircles its subject, attempting to describe what it feels like to be in her presence. It turns out the most notable takeaway is her “mobility of expression,” which is impressive considering how rare it is to find actresses that can simultaneously move and speak.

There's a kind of change of tone or pace that Emilia Clarke's very good at. She uses it in her acting, too, and can go from sentimental or angry to comic at the drop of a hat. It all shows up in her face if she wants it to—she's got great mobility of expression.

Esquire tries to strike at the core of Clarke's person again a bit later, but, perhaps overwhelmed at encountering such Esquire-approved Sexiness™ in combination with so many other human attributes, they end up just stringing together a bunch of antonyms and calling it a day.

We then get a brief description of Clarke’s working-class upbringing, her early love of theater and her struggle to make it as an actress, and a bit of talk about the “Game of Thrones” casting, which changed Clarke’s life.

And then the show itself took off—and Emilia had one of the few characters who couldn't be killed. She is the Mother of Dragons, after all.

Whatever you say, guy who thinks he’s profiling a "Downton Abbey" cast-member.

It’s at this point in the profile that we appear to be approaching the meaty stuff — you know, Clarke's thoughts on being the center of an obsessive fandom, the show’s fraught sexual politics, how she separates herself from her larger-than-life character  — but this gets abruptly cut off for the mandatory random activity section of the profile, which involves dressing Clarke in a disguise in order to participate in some sort of social-networking scavenger-hunt called "Game of Phones.”

This is also an opportunity for the author to dress up Khaleesi like a cross between Kevin Durant and his wife.

I brought along three disguises: a brown fedora I haven't worn since college; a glittery, vaguely ethnic shawl; and an Oklahoma City Thunder cap, bright blue, with the kind of brim that sticks up. (I live in London now, but I'm from Austin originally; Kevin Durant is the man.) She picks the cap and my wife's old sunglasses, tortoiseshell-rimmed and pointy at the edges. I don't know what she looks like. She looks great.

Turns out, Emilia [a.k.a. "Lilly"] is really good at being in disguise.

I've got a theory that movie stars (some of them at least) make it big partly because they epitomize something... Emilia has the very real charm of a certain type of English upbringing. "A pocket rocket," my friend calls her—small, sexy, lively, and lots of fun. But there's a whole set of virtues that goes with the fun. There's an attitude to life.

What is that attitude? Well it’s a willingness to "muck in," of course.

Everybody has to "muck in"—a phrase that means helping out and getting your hands dirty and smiling at the same time. But they also get "stuck in." Like if you're having a picnic on a summer's day, and the beach is more dirt than sand, and the dirt is mud because it's raining, and there's nowhere to sit apart from an outflow pipe, and everybody's cold, you open a bottle of bubbly and don't complain. And not just don't complain but actually have a good time, because you've got "a sense of humor.”.... You don't take yourself too seriously—all of these are very likable qualities. Emilia has them in spades.

Esquire also talks a lot about the other people on the tour, who are less likable than Emilia by virtue of not being Sexiest People Alive, and probably not even Sexiest People in Their District.

There's a marketing director for a Thames-river-cruise company. Maybe fifty years old, one of those men, I get the sense, who wears shorts and sandals on the weekend regardless of the weather.

Yeah screw you, guy on his weekend break who didn’t know he was part of a profile!

The other woman on our team is a vaudeville dancer, a Cambridge graduate who pays the bills by tutoring kids in everything under the sun—including beading.

Screw you too, beading lady!

Emilia never ends up revealing her true identity to the rest of the group, partly because they are plebeians who know nothing about "Game of Thrones."

But she also doesn’t reveal her identity because, well, she’s down to earth. Over post-scavenger hunt beers at the pub, the author mulls on this and concludes, for reasons I’m not sure he has fully supported in the text, that Emilia Clarke is many, many things other than sexy.

Things Esquire learns about Emilia that couldn’t be found on Wikipedia: