We are still plagued by “Heart of Darkness”: Conrad’s ambiguous masterpiece haunts the new “Beasts of No Nation,” and almost every other Western work about Africa’s troubles 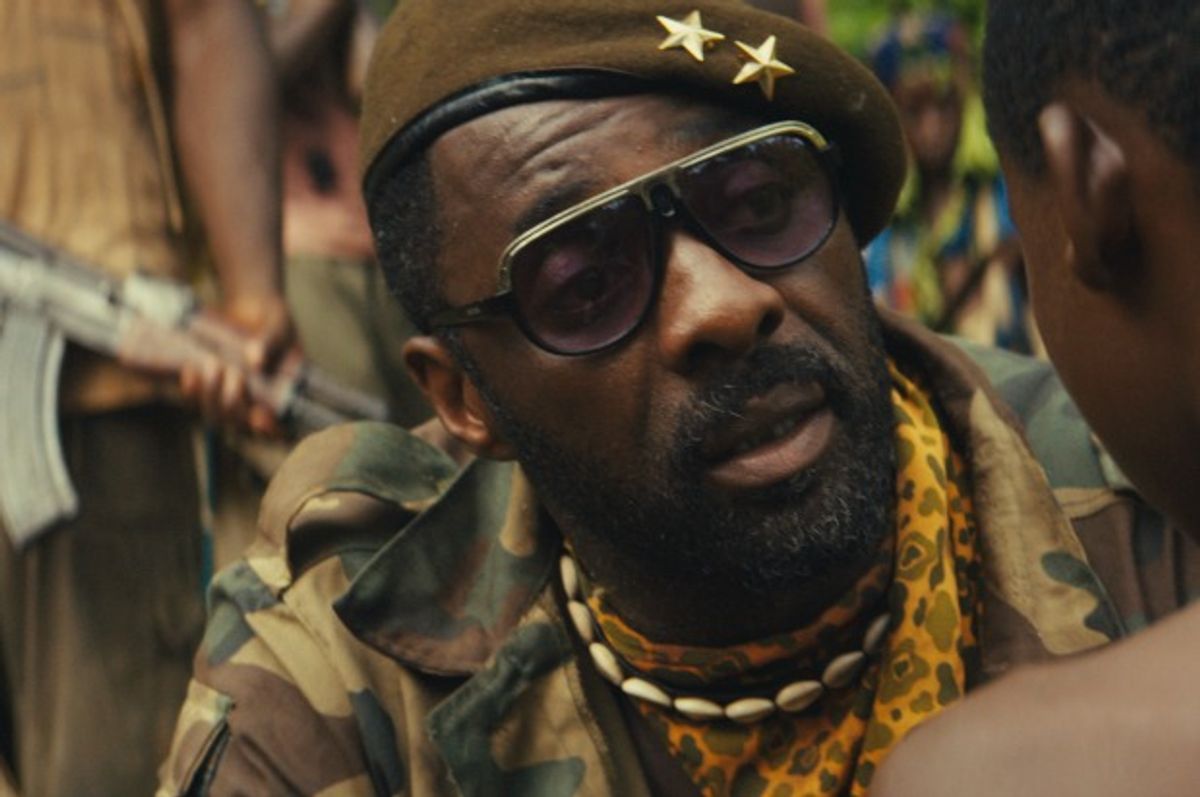 Why is Africa the way it is? As Joseph Conrad observed at the turn of the previous century, it’s a question that tormented “civilized” Europe, which gazed into a continent it considered primitive and unknown only to find a dark mirror of its own brutality. It is also a loaded or overloaded question that begins by assuming too much. How much do we really understand about Africa, in the global north and the industrialized West, about its past or present or possible future? Beyond clichéd images of starving children, shantytowns and incomprehensible tribal warfare – clichés that are not entirely inaccurate, but cannot encompass an enormous and diverse continent of 54 (or possibly 56) sovereign nations, more than 1 billion people and perhaps 3,000 languages – the answer is that we understand almost nothing.

Conrad’s 1899 “Heart of Darkness,” with its memorable portrayal of Kurtz, a white colonial officer in the Belgian Congo driven to madness and murder, is increasingly viewed by Western academics as a problematic work and has been sharply criticized by African writers and intellectuals. Chinua Achebe, probably the continent’s most prominent novelist, attacked Conrad’s novella in a famous 1975 lecture as “an offensive and deplorable book” whose critique of colonialism is so corrupted by racism and xenophobia as to undermine any claims to literary greatness.

Some Africans or people of African ancestry, including the British novelist Caryl Phillips, have taken a more nuanced view, perhaps because they perceive that “Heart of Darkness” is not so much about Africa as about European civilization’s confrontation with itself, and that the darkness Conrad perceives is within the human soul, and has little to do with geography or skin color. To this day “Heart of Darkness” retains a powerful grip on the Western imagination when it comes to our engagement with the colonial and imperial past and the global capitalist present, around the world but especially in Africa. All the problems and limitations Achebe identified in Conrad’s work are still with us too, in subtly altered form, making it difficult for us to perceive Africa on its own terms through the scrim of Western arrogance and guilt and self-delusion and self-regard.

By any reasonable standard, Cary Joji Fukunaga’s much-anticipated film “Beasts of No Nation” (which is released simultaneously in theaters and on Netflix this week) is also a Western work set amid the baffling and possibly metaphorical carnage of Africa, and one with a distinct debt to Conrad’s classic. “Beasts” is an alternately gruesome and heartbreaking tale of innocence destroyed, built around the remarkable performance of child actor Abraham Attah as an orphaned boy in an unnamed West African country who becomes a child soldier in a civil war he doesn’t remotely understand. The film was shot in Ghana, but financed in America. Its writer and director, best known for his stylish and moody work on the first season of “True Detective,” is from California. Its only name actor, Idris Elba – who plays a charismatic, ruthless and possibly psychotic warlord with distinctly Kurtz-like qualities -- is from the London suburbs.

Yes, Fukunaga’s screenplay is based on the acclaimed novel by writer, scholar and physician Uzodinma Iweala, who was born in Nigeria – but who largely grew up in Washington, D.C., where he attended St. Albans School before going to Harvard. I’m not disputing Iweala’s credentials or his African identity. I’m observing that the world of the 21st century has become complicated in ways Joseph Conrad could not have imagined, but that the dynamic cultural relationship between Africa and the West that he saw in the 1890s has continued to evolve. Iweala is as much a product of Conrad’s tradition as of any indigenous African tradition, and even Chinua Achebe surely understood that it’s much too late to disentangle the two.

My problem with “Beasts of No Nation” is not with Attah and its other young actors, not with Fukunaga’s ambitious ground-level cinematography (he shot the film himself) and certainly not with Elba’s terrifying but magnetic antihero, known only as the Commandant, who dominates his child warriors through a combination of brutality, drugs, sexual abuse, superstition and psychological manipulation. Nor is it Fukunaga’s canny inversion of Conrad’s archetypes and the suggestion – which is by no means a new idea – that colonial psychopaths like Kurtz served as teachers and models for generations of African Kurtzes who emerged from the chaos of the post-colonial era.

But at least in Fukunaga’s screen adaptation, “Beasts” is a faintly patronizing and emotionally manipulative work that explains far too much about its central character’s inner life (as if we couldn’t tell that he is profoundly traumatized after he is forced to kill a man with a machete) but almost nothing about his social context. Even in its better moments, as when we see Elba’s ghoulish Commandant as a weak and power-hungry man at the mercy of greater forces who has learned one lesson – the logic of superior force and ruthless violence – I wanted to go back to other movies that tackle the contradictions of contemporary Africa and its relationship to the West more honestly and directly.

If the accessibility and wide availability of “Beasts of No Nation,” along with Elba’s star appeal, opens a door for audiences, then the film will have done its job. On the other side of that door are many dazzling discoveries that don’t have one-tenth of this movie’s profile but help illuminate my naïve opening question: What happened to Africa, and who is to blame? There are “Timbuktu” and “Bamako,” the masterpieces of Abderrahmane Sissako, Africa’s greatest living filmmaker. (Who lives and works in France, because there is no escaping the global system or the historic crimes depicted in his films.)

There are the acerbic, witty and brilliant documentaries of Austrian director Hubert Sauper, who has repeatedly risked his life flying around Africa in a homemade airplane, “Darwin’s Nightmare” and “We Come as Friends.” There is “War Witch” by the Canadian director Kim Nguyen, and “Munyurangabo,” by the American director Lee Isaac Chung, two zero-budget indies about African war orphans that are better than “Beasts of No Nation.” (The fact that three such films have been made by North American directors of Asian ancestry is a coincidence I will not try to explain.)

Standing as the theoretical underpinning or advanced course behind all those, there is also Göran Hugo Olsson’s haunting and mesmerizing collage documentary “Concerning Violence,” a work I return to almost compulsively. Composed entirely of vintage film or video footage drawn from the half-forgotten era of African revolutionary nationalism and anti-colonial warfare, it features Lauryn Hill reading excerpts from “The Wretched of the Earth,” the classic work of revolutionary philosophy by Caribbean-born, French-educated black radical Frantz Fanon. It was Fanon who observed that colonialism teaches the native people that violence is the only effective political strategy, and the only language the colonizing power will ever understand. That was the lesson Joseph Conrad saw in Africa in the 1890s, however imperfectly, and that “Beasts of No Nation” echoes today.