Bracing for the Third Intifada: Why violence in Jerusalem signals an ugly future

In 2013, John Kerry warned Israel about continuing its settlement of the West Bank. It didn't stop, and here we are 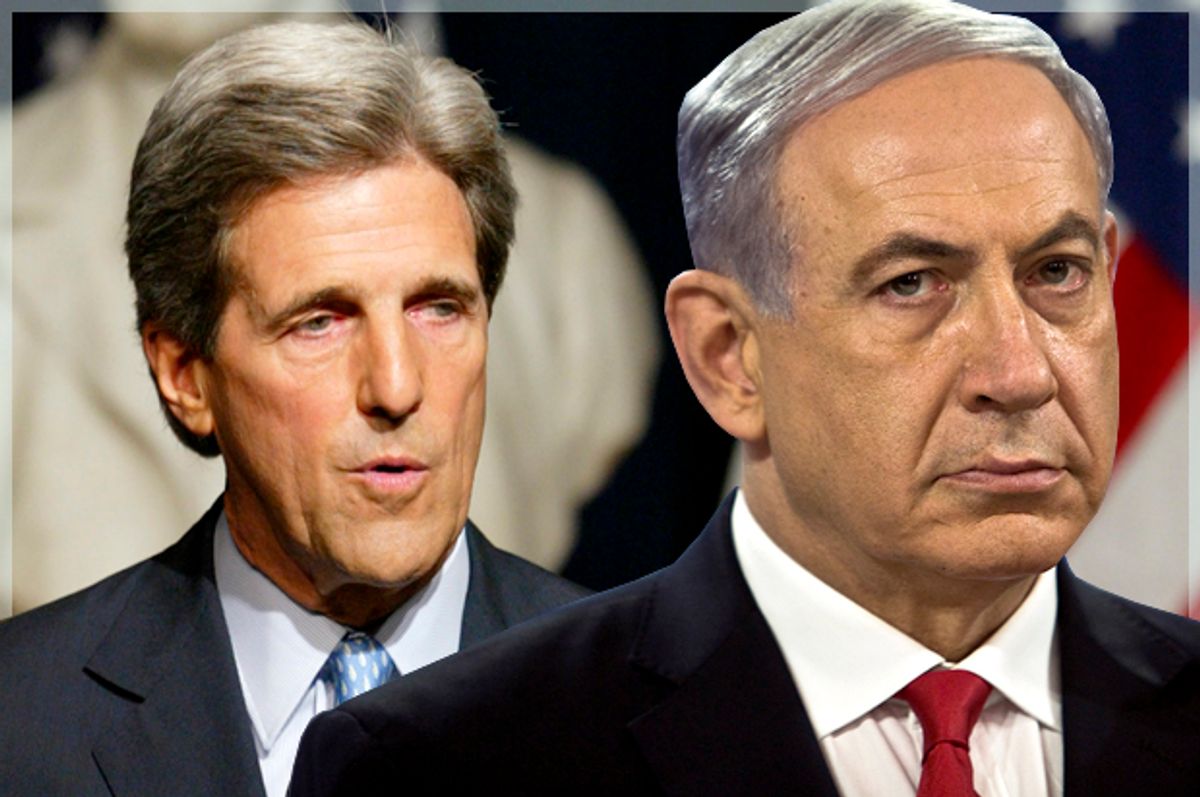 A wave of violence and reprisals flaring in East Jerusalem and occupied Palestine has both Israelis and Palestinians preparing for the potential of a third Intifada, or Palestinian uprising against the Israeli military occupation. Palestinian Authority president Mahmoud Abbas has uttered the powerful word; Hamas leader Ismail Haniyeh and the head of the second largest party in Israel, Isaac Herzog, all see the violence as an incipient third Intifada. The 1987 and 2000 Intifadas claimed more than 5,000 Palestinian and Israeli lives, most of them civilians on both sides.

On the heels of the Gaza-oriented conflict of recent years, those brutal and bloody invasions of the Hamas-governed Strip having become almost routine, along with relative peace in the larger occupied West Bank, a Palestine-wide rebellion may surprise many who haven’t paid much attention since the second Intifada concluded in 2005. But it’s no longer the alarmists you follow on Twitter who warn now of an Intifada; the most important diplomat in the world, Secretary of State John Kerry, boldly took to Israeli television in 2013 to warn citizens that without a cessation to settlement growth, a central precondition to peace talks, Palestinian rebellion might become an inevitability.

The statement came during an interview broadcast simultaneously on Israel's Channel 2 and the Palestinian Broadcasting Corporation, and saw Kerry uttering the following hypothetical: “I mean, does Israel want a third Intifada?”

In language that would be fairly radical for any White House official, Kerry delivered directly into Israeli living rooms a warning about the “increasing isolation of Israel” and a continuation of the “delegitimization of Israel that’s been taking place on an international basis” due to its intransigent land-grabbing in the West Bank.

“If we do not resolve the question of settlements and the question of who lives where and how and what rights they have,” Kerry continued, “if we don’t end the presence of Israeli soldiers perpetually within the West Bank, then there will be an increasing feeling [among West Bank Palestinians] that if we cannot get peace with a leadership that is committed to nonviolence, you may wind up with leadership that is committed to violence.”

American largesse notwithstanding, the government of Benjamin Netanyahu and the voters who returned him to office earlier this year weren’t much fazed by Kerry’s warning, and settlement-building has continued mostly unabated. You might even think Israel is provoking an Intifada. Under Ariel Sharon, Israel removed its relative handful of Gaza settlers at the end of the second Intifada in 2005, only to step up its populating of the West Bank, with the intervening decade seeing that number rocket from around 250,000 to more than 350,000, with another 300,000 in Israeli-occupied East Jerusalem. The Israeli population in the West Bank has grown at twice the rate of Israel proper. Earlier this year, the New York Times described settlement growth under Netanyahu as “a march toward permanence,” the approach of a threshold of irreversibility and the effective annexation of the territory.

In its latest provocation against Palestine -- and most of the international community that isn’t the U.S. government -- Prime Minister Netanyahu’s government in September sent as its ambassador to the United Nations General Assembly Danny Danon, a true radical who openly discusses the annexation of the West Bank and East Jerusalem, per millennia-old scripture. Israeli newspaper Haaretz said the selection of Danon “throws Israel off the diplomatic cliff” ahead of last month’s meeting of the community of nations. According to Israel’s second-largest party, the Zionist Union, the appointment is “another nail in the coffin that Bibi [Netanyahu] is putting in Israel’s foreign relations.” David Horovitz, the founding editor of the Times of Israel, wrote, “Undeniably, now, by the prime minister’s own decree, Danny Danon is the true face of Netanyahu’s Israel.”

Danon, whom Horovitz calls the “arch-critic of a two-state solution,” proposed in a 2011 New York Times op-ed that Israel should annex the West Bank and establish an apartheid state. Danon wrote that Netanyahu “should annex the Jewish communities of the West Bank, or as Israelis prefer to refer to our historic heartland, Judea and Samaria,” laying bare the desire of many Israelis to establish the Israel of the Torah, stretching from the Mediterranean to the Jordan River. In Danon’s proposal, the nearly 3 million Palestinians caught in between the settlements “would not have the option to become Israeli citizens, therefore averting the threat to the Jewish and democratic status of Israel by a growing Palestinian population.”

“I think we should no longer think of Jewish settlements in the West Bank, but Palestinian settlements in Israel,” Danon said in 2013, while still deputy defense minister. Unlike the democratic one-state outcomes that many observers see as increasingly inevitable in the event of ongoing Israeli expansion, Danon’s single state remains a Jewish Israel -- which would require a good bit more ethnic cleansing in order to ensure that an Israel built on top of Palestinian territory doesn’t include whatever Palestinians are left. One imagines that remaining Palestinians would be Jim Crow-style quasi-citizens or shunted off to Jordan somehow, as Danon has suggested.

On the flash point of Jerusalem, divvied among Israelis and Palestinians under international law, both Danon and Netanyahu aggressively assert Israeli rule. The conclusion of the Six Days War in 1967 saw Israel gaining control of the West Bank, and, in particular, East Jerusalem’s Temple Mount, site of the Muslim Dome of the Rock and the al-Aqsa Mosque, the third-holiest site in Islam. Sharon’s visit to al-Aqsa in 2000 is widely regarded as the antagonistic spark that ignited the second Intifada, also called the “Al Aqsa Intifada.” Likewise, the current violence is seen to have emerged out of events at the Temple Mount. After a week of clashes between worshippers and the Israeli security force, the Israeli government last month barred men under 40 from the Muslim holy site.

More deadly attacks by Palestinians and trigger-happy Israeli security forces since have continued to bear the mark of an Intifada. Israeli citizens, not combatants, are being targeted in knife attacks, and the response by Israeli security forces is seen as disproportionate by many Palestinians, with President Abbas’ spokesman comparing the police “execution” of an alleged 15-year-old assailant to the killing of 12-year-old Mohammad al-Dura in 2000, an event that helped propel the second uprising.

Is this the third Intifada Secretary Kerry predicted? Netanyahu’s response since Kerry’s dire warning has demonstrated a surprising willingness to shrug off such admonitions from Israel’s principal benefactor and sole good friend on the international stage. The occupation has proceeded and expanded without pause, and the ultimate aim of annexation can no longer be denied, with Danon presented to the world community as the diplomatic face of Israel. The “settler”-based nomenclature no longer suffices; this is colonization, illegal by any measure. Who expects docility and acquiescence in the face of colonizers? Kerry surely doesn’t: “I’ve got news for you. Today’s status quo will not be tomorrow’s,” he warned in 2013. “As long as the aspirations of people are held down... the possibilities of violence increase.”