Since when is Ronda Rousey a role model?

The UFC champ is everyone's favorite new badass, now that her history of transphobia and violence are being ignored 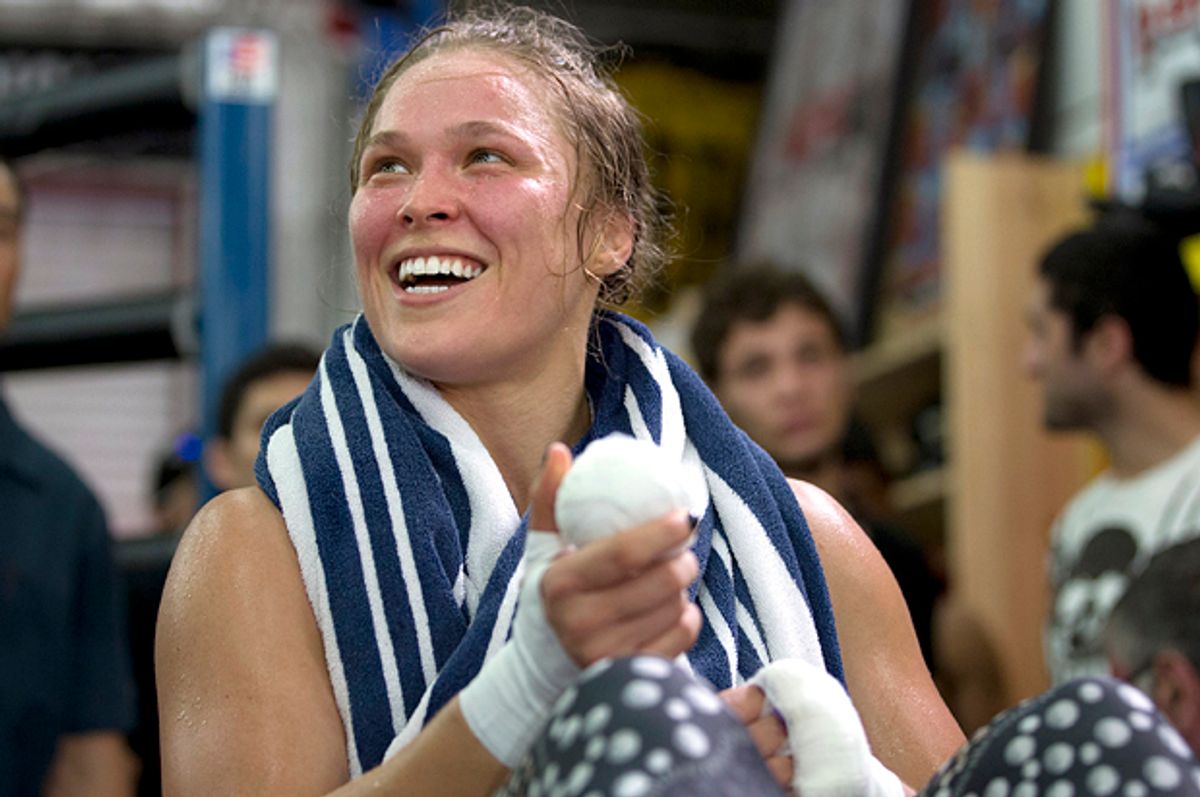 “Rowdy” Ronda Rousey is an incredible fighter, an Olympian, a movie star, maybe even a burgeoning fashonista and — if you go by countless Internet headlines about the UFC women’s bantamweight champion — an icon and a role model.

Rousey started fighting in 2011 and quickly captured the attention of MMA fans. She joined the UFC in 2013, but didn’t ascend to international superstardom until recently, in part thanks to roles in "The Expendables 3," "Entourage" and "Furious 7." When she finally did become a crossover hit, it was massive. Not many MMA fighters receive coverage in The New Yorker and The New York Times, nor do they get shoutouts from celebrities like Beyoncé, Chris Pratt, Shaq and Dwayne “The Rock” Johnson. And the people of Brazil don’t start crying upon the sight of other celebrities and sports stars like they did with Rousey.

While Rousey is all people say she is (and more) athletically, outside of martial feats, her role model status is questionable. First, Rousey has a history of highly transphobic remarks and flat-out ignorance when it comes to trans athletes. In 2013, when UFC fighter Matt Mitrione made offensive comments about transgender MMA fighter Fallon Fox, calling her a “lying, sick, sociopathic, disgusting freak,” the New York Post asked Rousey for her thoughts on Mitrione’s words. Rousey said he expressed himself “extremely poorly” and that she could “understand the UFC doesn’t want to be associated with views like that.” But in that same interview, Rousey didn’t exactly demonstrate a predilection for sensitivity. “She can try hormones, chop her pecker off, but it’s still the same bone structure a man has,” Rousey said about Fox. “What if she became UFC champion and we had a transgender women’s champion? It’s a very socially difficult situation.”

It’s only a “socially difficult” situation thanks to people like Rousey. Earlier this year, Rousey tried softening her words — though not changing her opinion — in an interview with the Huffington Post. “From what I’ve read, it seems if like you’ve already gone through puberty as a man, even if you really want to rid yourself of those physical advantages, I just don’t think science is there yet.”

Rousey studied the wrong “science,” because claims of supposed transgender superiority in athletics are categorically false and have zero scientific backing.

But her insensitive musings go beyond transmisogyny and transphobia. This summer, Rousey decried what she called a “do-nothing bitch”:

"I have this one term for the kind of woman that my mother raised me to not be and I call it a 'do-nothing bitch.' The kind of chick that just, like, tries to be pretty and be taken care of by somebody else. That's why I think it's hilarious, like, that people like say that my body looks masculine or something like that. I’m just like, listen, just because my body was developed for a purpose other than fucking millionaires doesn’t mean it’s masculine. I think it’s femininely badass as fuck. Because there’s not a single muscle on my body that isn’t for a purpose. Because I’m not a do-nothing bitch."

Being proud of your body is great. Burying other women because they have a different body than yours is not. As Alanna Vagianos noted in the Huffington Post, Rousey’s DNB speech is “certainly not empowering, and it certainly does nothing to combat the large issues that create a society where athletic bodies like Rousey’s are judged as less than.”

Despite tone deaf and responsive commentary, Rousey became the darling of the Internet media after the ESPYs. She won the “Best Fighter of the Year” award and called out Floyd Mayweather for his history of domestic violence.

“I wonder how Floyd feels being beat by a woman for once,” she said. Rousey didn’t quit her verbal blitz, claiming she made more money per second than Mayweather. The feud spawned billions of “who wins in a fight between Ronda Rousey and Floyd Mayweather???” clickbait takes. Domestic violence is abhorrent. Yet Rousey is currently dating UFC fighter Travis Browne — a man accused of domestic abuse in his previous relationship. In August, his wife Jenna Renee Webb said she’d be pressing charges against Browne. Though a third-party investigation done at the behest of the UFC found “inconclusive evidence” of these claims.

It gets worse. In her book “My Fight/Your Fight,” Rousey wrote that her then-boyfriend (she used the pseudonym “Snappers McCreepy”) was taking nude pictures of her without her permission. Her reaction follows:

"I deleted the photos. Then I erased the hard drive. Then I waited for Snappers McCreepy to come home from work. I stood frozen like a statue in his kitchen, getting angrier and angrier. I started cracking my knuckles and clenched my teeth. The longer I waited, the madder I got. Forty-five minutes later, he walked in the door. He saw my face and froze. He asked what was wrong and when I didn’t say anything, he started to cry. I slapped him across the face so hard my hand hurt."

Rousey then wrote that “Snappers McCreepy” begged her to let him explain. She refused. He was blocking the door and wouldn’t move out of the way. So she “punched him in the face with a straight right, then a left hook.” She slapped him again. He still didn’t move, so she “grabbed him by the neck of his hoodie, kneed him in the face, and tossed him aside on the kitchen floor.”

Rousey had a right to make Mr. McCreepy move out of her way, and what he did to her was extremely wrong, but the incident seems a bit excessive nonetheless.

Personal interactions aside, after the Newtown massacre, Rousey raised eyebrows on Twitter when she retweeted a Sandy Hook truther video. When criticized, she tweeted: “asking questions is more patriotic than blindly accepting what you’re told.” Her manager issued a pathetic non-apology and UFC president Dana White said there was no issue and the real problem was “people are fucking pussies.”

Why do we tolerate this from Rousey when other celebrities were sacrificed on the altar of public outrage for much less? It’s an easy answer for the MMA media. They’re largely subservient to the UFC since the UFC issues press credentials. Write the wrong article and you’ll find your website on the outside looking in. The dissident MMA site CagePotato (disclosure: I worked for CagePotato in the past) ran an entire series on the undue influence the UFC has over the MMA media. Two years ago, Deadspin published a leaked memo from Bleacher Report (I worked for Bleacher Report in the past, too) detailing “things you don’t do” when writing about the UFC. This summer, UFC president Dana White suggested on Twitter that he paid USA Today for coverage. But that’s the MMA media – a horde of fanboys and UFC bootlickers. What about the mainstream entertainment  media? What’s their excuse?

Maybe the answer is MMA — a sport rife with misogyny and other twisted views — expects less than perfect behavior from its stars; supremacy inside the cage and sordidness outside of it are accepted.

And perhaps the mainstream media finds the narrative of an unstoppable, badass warrior woman (who happens to be conventionally attractive and white, because if she wasn’t, they’d probably be writing horrific, offensive articles about her) destroying everything in her path irresistible at a time when feminism is at the forefront of the cultural zeitgeist.

There’s “problematic fave” and then there’s flat-out bad person. The Mary Sue’s Teresa Jusino nailed it when she wrote “Rousey is a hypocrite who flouts gender norms when it suits her, but throws women under the bus when it doesn’t.”