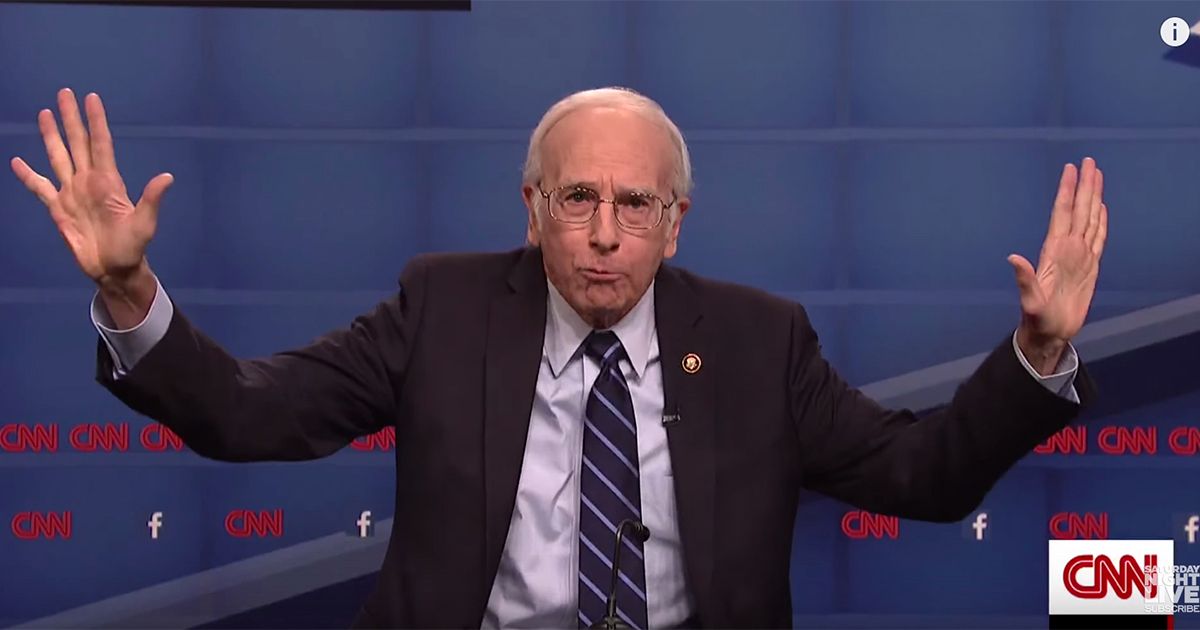 When Larry David was on "Saturday Night Live" he only got one sketch on the air and the audience didn't laugh. Thirty years later, the Seinfeld creator returned as Bernie Sanders and the Internet lost its mind with David trending on Twitter well into this morning. If you thought Colbert's Sanders haggling over the brunch check was good, David crushed it.

The sketch mocked the first democratic debate with a smiley Lincoln Chafee talking about how fun it was to be a senator, Alec Baldwin as Jim Webb who was angry, of course, because he didn't get to talk before he was introduced, the Hillary Clinton her staff put together for the debate, and Bernie "We're Doomed" Sanders.

With a perfect Sanders accent and broad hand gestures and finger points, David shouted about revolution asking why the hell the big banks chain all their pens to the desk. His solution for Wall Street reform was to break up the big banks into little pieces and then flush them down the toilet. "Then ya make the bankers pay for college for everyone, and America is fixed! Hey!" he said shrugging and gesticulating wildly. Hillary puts a damper on the idealism saying Bernie is promising a "golden goose" but Bernie assured the debate audience he's found geese before and he can find them again. "They congregate near ponds. It's not rocket science!"

After Bernie repeated the famous email line Hillary shook his hand and thanked him, commenting that it must be nice to scream and cuss in public. "I have to do it into tiny little jars." You'll want to watch the rest of the hilarious video below.

As the show opened a recovering Tracy Morgan walked carefully out on stage to give his monologue. As Morgan told the audience, "People were wondering: Can he speak? Does he have 100 percent mental capacity?” he said. "But the truth is, I never did. I might actually be a few points higher now.”

Morgan came to fame on SNL in the 1990s and early 2000s before moving on to NBC's "30 Rock," but after a horrible accident in 2014, Morgan has been recovering slowly making only a teaser performance at the Emmy Awards in September. Morgan said the accident "was awful, but it also showed me how much love and support I have in this world. I’m so lucky I have my comedy family," he said. "When this happened, I knew they would all be there to support me."

When the show ended, "30 Rock" cast members joined Morgan on stage for an emotional send off. Check out the video below.