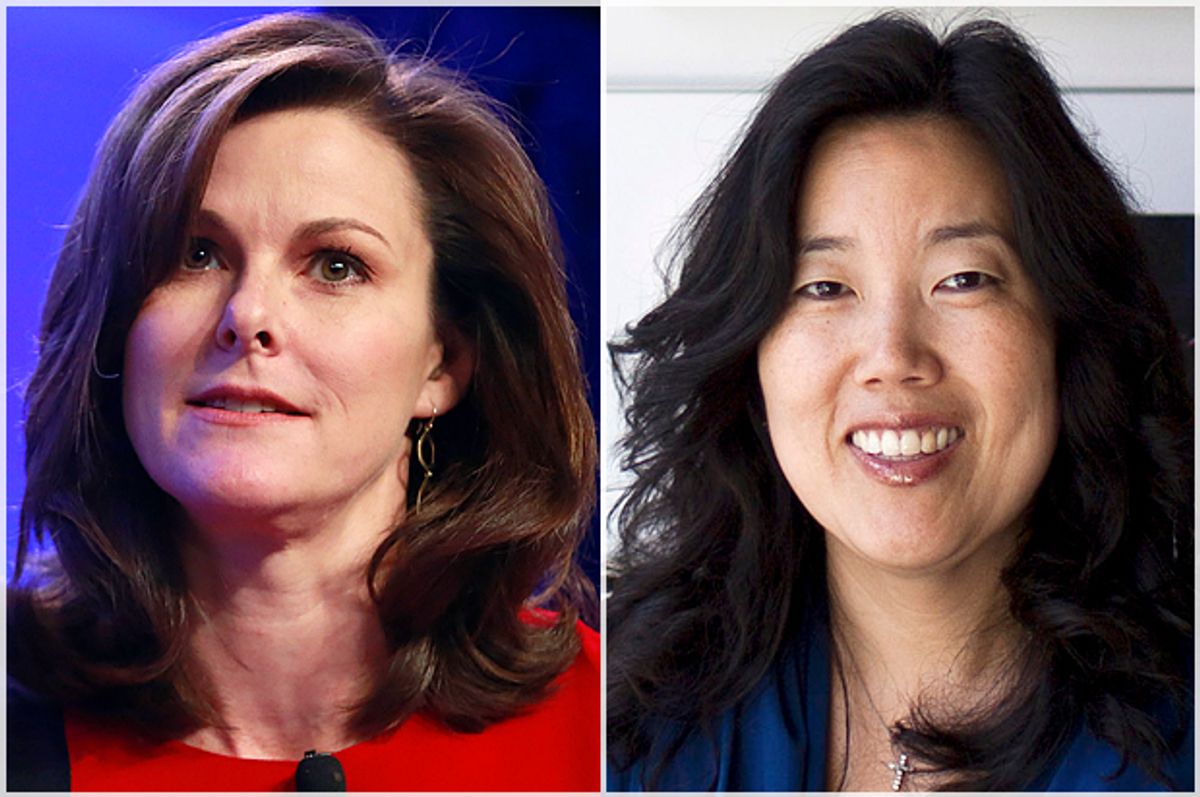 Before Democratic Party presidential candidates readied for their first debate on CNN, they turned down an opportunity to meet at another forum.

That meeting was to be hosted by ex-CNN anchorwoman Campbell Brown, who now operates a media outlet, The Seventy Four, that promotes charter schools and other public education policies favored by wealthy foundations and individuals. Brown's financial backers include the philanthropic organization of former New York City Mayor Michael Bloomberg and the foundation of the family that owns Wal-Mart.

As Politico reports, Brown's group and another charter advocacy organization had already brought six Republican candidates together in New Hampshire in August to talk about education policy. Next, in conjunction with the Des Moines Register, the two organizations wanted Democratic candidates to gather in Iowa. None of the candidates would commit to attend even in principle.

Politico reporter Michael Grunwald was quick to frame the candidates' snub, with obvious help from Brown herself, as proof of the political might of teachers' unions.

For sure, Brown's history of fighting with teachers' unions. As an article in The Washington Post last year reported, she led an effort to cast the New York City teachers' union as a protector of sexual predators.

After that venture, Brown launched a group that filed a lawsuit in New York State to dilute teachers’ job protections, commonly called “tenure.”

So she is clearly at it again. Grunwald quotes her, "The teachers' unions have gotten to these candidates.”

“It’s shameful how my party is being held hostage by the unions,” Grunwald quotes Kevin Chavous the head of American Federation for Children, the other organization sponsoring the event. “I see no difference between their strong-arm tactics on the Democrats and the gun lobby’s tactics on Republicans.”

This is not the first time a proponent for charter schools has compared an organization representing classroom teachers to an extremist group that responded to the gun deaths of school kids and educators in a Newtown, Connecticut, elementary school by blaming the teachers for not packing heat.

Comments like these show how hyperbolic people who back charter schools, high-stakes testing and a crackdown on teachers' collective bargaining rights have become.

But aside that offensive remark, Brown and Chavous also took to The Daily Beast to accuse the teachers' unions of "bullying" them and being "anti-democratic." They warn the Democratic Party presidential slate, "Voters have demonstrated time and again that candidates who buck the teachers’ union are rewarded." (Uh-huh, tell that to ex-Pennsylvania governor Tom Corbett or failed California state education superintendent Marshall Tuck, who both lost elections, in large part, for bucking unions.)

Charter school proponents in other corridors of the education reform echo chamber offered similar counsel to the candidates.

On the blog site EducationPost — a media outlet funded with $12 million by some of the same wealthy foundations and individuals who back Campbell Brown — Hillary Clinton, Bernie Sanders, and the rest of the candidates were called "pathetic … They’re afraid of the unions who warned them not to attend the event."

In an op-ed appearing in USA Today, Richard Whitmire — a routine commentator at The Seventy Flour and author of a "worshipful portrait," according to education historian Diane Ravitch, of former Washington, D.C., school chancellor Michelle Rhee — wrote, "The party of Hillary Clinton must decide: Support teachers' unions or fight for low-income, minority children."

This overheated rhetoric sounds a lot like concern trolling coming from conservative Republicans. One of those, Fox News contributor Juan Williams, noticed the candidate no-shows for Brown's event and wrote for The Hill, "Clinton and her Democratic rivals have shunned an invitation to an education reform forum because it was sponsored by former CNN anchor Campbell Brown … out of apparent fear of antagonizing the unions. The price of a union endorsement is too high for school children."

All this bloviating over a botched attempt by charter school proponents to stage an event allowing them to frame issues for their own end is not only rhetorical overload, it's really bad political advice.

It's the Parents, Stupid

In communities such as Nashville, Tennessee, and Jefferson County, Colorado, parents, not teachers' unions, are leading the opposition to the takeover of public schools by self-proclaimed reformers.

The successful mayoral campaigns of Bill de Blasio in New York City and Ras Baraka in Newark, New Jersey, drew their strength from coalitions of voters who, yes, supported public school teachers, but also wanted solutions to the growing inequities in their cities, such as raising the minimum wage and big changes in the criminal justice system.

There is a reason, after all, Secretary of Education Arne Duncan made his now infamous remark about "suburban moms" being the main opposition to the roll out of his high-stakes testing agenda for schools. Those really were suburban moms, and not the teachers' unions, speaking out in defiance.

Unions Are Good for Low-Income Kids

Also, if Brown and her fellow education activists were really so concerned about the future of kids who live in low-income communities, they would be advocating for labor unions rather than opposing them.

My colleague Dave Johnson at the Campaign for America's Future recently came across a new study conducted for the Center for American Progress, which found in places where union membership is higher, low-income children, in particular, benefit from “economic mobility” and “intergenerational mobility.” In plain English, this means union strength correlated with low-income children being more apt to rise higher in the income rankings — and for their children in turn to be better off.

Reporters at the New York Times looked at the study as well and noted, "There aren’t many other factors that are as strongly correlated with mobility" as the presence of unions. "A 10-percentage-point increase in the rate of unionization in an area coincided with a rise of an additional 1.3 points on the income distribution as the average child becomes an adult," they wrote.

Combating unions is not only a strategy unlikely to result in good outcomes for low-income kids, it also seems completely out of step with the political zeitgeist of the times.

Robert Borosage, another CAF colleague with over three decades of experience as a political strategist, observes that among presidential candidates in the Democratic Party, "The growing populist movement in this country is driving this debate."

"Populist" as Borosage uses the term, is stridently pro-union and opposed to the agenda of the big moneyed interests — the same folks who are typically behind charter schools and crackdowns on teachers' rights and parent and student voice in school governance.

Likely sensing the populist uprising, Democratic front-runner Hillary Clinton, after turning down the invitation to Brown's klatch, made a surprise appearance at a union rally in Las Vegas where boisterous protestors were demanding higher wages and better treatment from their employer, a hotel bearing the name of Republican presidential primary frontrunner Donald Trump.

Also, the two Republican Party presidential hopefuls who are most aligned with the anti-union, pro education reform advocacy stances of Campbell Brown and her fellow advocates have not fared well.

The fate of Wisconsin Governor Scott Walker is the most obvious example of how union bashing is not a sure-fire strategy for political gain. As another CAF colleague and veteran political observer Bill Scher observed upon witnessing Walker's withdrawal from the presidential race, "Scott Walker proves you can’t union-bash your way to the White House."

Walker, who had made a political career out of "his glorious union battles," in Scher's words, "became pathetic. … In the waning days of his campaign, he offered his one big idea: eliminate federal worker unions and abolish the National Labor Relations Board. Nobody cared."

The other Republican candidate most aligned to the pro-charter, anti-union agenda of education reform proponents, former Florida Governor Jeb Bush, is still in the race but has faltered severely in polling results.

More than any other candidate, Bush has made his battle for charter schools and punitive education policies in the Sunshine State a centerpiece of his campaign. This strategy hasn't done him any good, most notably because those policy ideas are now widely held in contempt in his own state.

"The Bush-era reforms have failed," writes a columnist for the Tampa Bay Times, noting the state's school accountability system established during Bush's regime has collapsed in ruins, and the system of testing put into place "turned schools into sweatshops."

Investigative reports conducted by this author for the Alternet news outlet have found Bush's expansions of charter schools have done little to advance the academic and life achievements of low-income kids and have instead opened of the state's education system to widespread corruption and fomented chaos in communities.

Given what has happened to Walker and Bush, no candidate in his or her right mind should embrace the strategy promoted by Brown and her cohorts.

An Authentic Movement, if Democrats Want One

Many people leading the effort to stifle classroom teachers and do damage to public schools so charter schools can be presented as an attractive alternative like to believe they are leading a movement. But it's far from certain their movement is catching on.

As the dust settles after the first debate among the Democratic Party presidential candidates, it became clear none of the issues charter school advocates care about came up in the discussion. While that's not a good thing, necessarily, it shows despite all the money the Wal-Mart foundation and other rich folks can bring to bear, the return on their investment so far is pretty poor.

In the meantime, a grassroots constituency that sees big money pouring into campaigns for closing neighborhood schools and opening up more charters is increasingly unconvinced wealthy white people have the best interests of low-income black and brown children in mind.

This from-the-ground-up movement has also yet to influence the presidential debates, in either party. But should Democratic candidates decide to pay attention, it will be obvious to them which of these two education "movements" really represents an authentic voice for positive change.