Ebony's controversial Cosby cover prompts polarizing responses: "This is not creative or expressive journalism, it's slander" 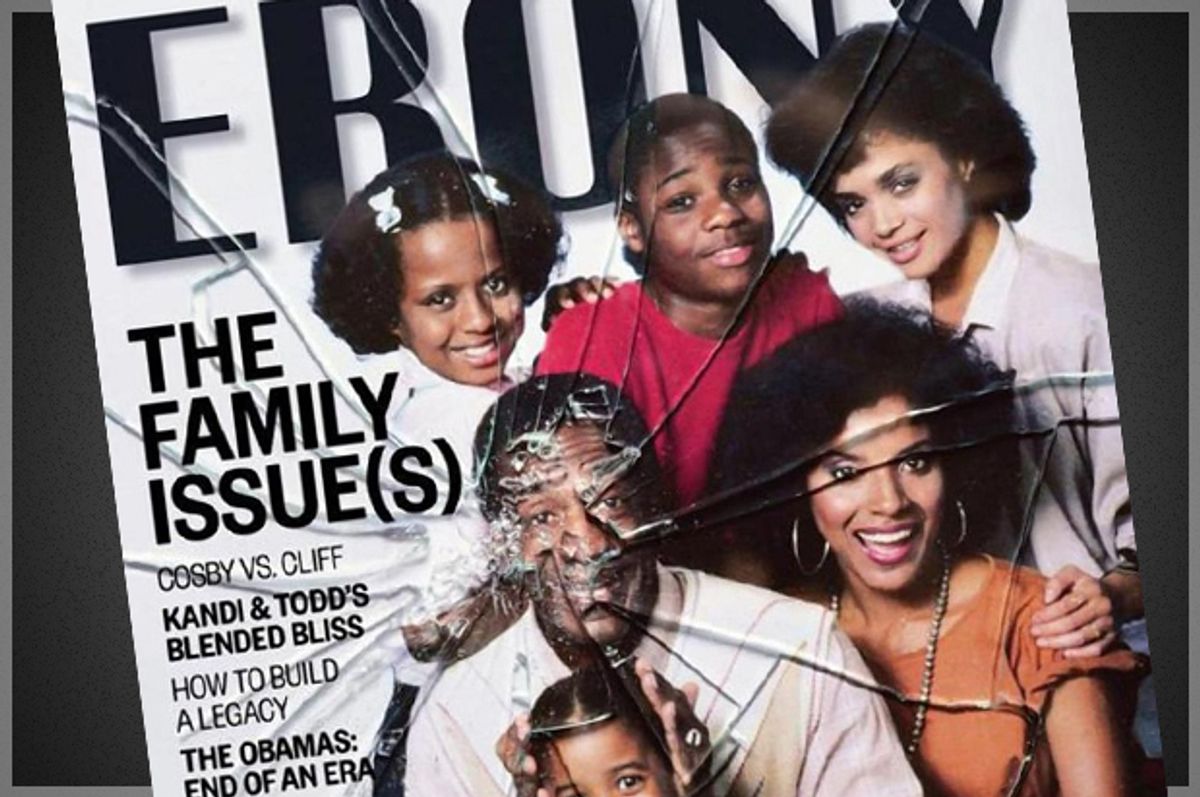 In its challenging new cover image, Ebony magazine depicts Bill Cosby's "Cosby Show" TV family under a sheet of shattered glass along with the tagline "THE FAMILY ISSUE(S)." The cover, along with the corresponding article, probes the complex notion of whether it is possible to celebrate Cosby the (alleged) serial rapist from his iconic TV character Cliff Huxtable.

The cover was obviously intended to provoke conversation. Kierna Mayo, the magazine's editor in chief, confessed on CNN that she hadn’t slept in days leading up to publication, but said that she felt that the cover brought up important questions. “We must ask the big loaded question,” said Mayo. “Can we, should we, separate the man from the fictional character who we all exalted, loved, needed, and in some respects, worshiped the idea, the notion behind?”

Naturally, there has been both praise and criticism of the bold cover. “The Cosby Show” was a seminal depiction of African-American family life onscreen that challenged negative racial stereotypes, and many readers reject the notion that Cosby’s real-life crimes ought to erase the show’s broad and positive impact on culture as a whole.

To get a sense of some of the differing opinions, here' a look at some of the reader responses from Ebony’s Facebook page:

"It would be more acceptable if the same image was published, minus the surrounding characters, who are not guilty by association. This is not creative or expressive journalism, its slander.” — Christopher Bryant

"Ebony Magazine once again proves that they're out of touch, silly, and lazy. You're not bold enough to logically attack Cosby the man so you crack the fascade of this show that meant so much to America." — Tahani Shanee

"Where is 7th Heaven…or Full House? Did you write about Jared of Subway and more. Though your cover is profound, I find it to be also harsh, crass, demeaning and you've really left me in a very flummoxed state of mind. Wow! Get it together Ebony.” — Until No More

"I am saddened that Ebony magazine chose to do this and even sadder about the allegations of Mr. Cosby, but for me this show was iconic and IT STILL IS!!! I have not, nor will I ever look down on what this TV show meant or what A Different World meant to many children. These shows changed lives and opened up HBCU's to kids that had no clue what they were, so for that I am eternally grateful for them being on air. #NotBuyingEbony” — Lenita Galloway Patton

"The positive values that the Cosby Show promoted should not be tarnished or negated by the mess in Bill Cosby's personal life. If anything, EBONY, you should have used a photo of Cosby by himself.” — Yolande Rose

"Steven Collins admitted to molesting children, yet Ebony did not do a cover story on him, but then I guess that is the way the slave master taught them, slander and agree with the white man, while destroying the Black man; so far no proof of any wrong doing on Mr. Cosby's part." — Jean Walker

“This is brilliant. People are getting mad without READING what it's about. Its provocative imagery meant to spark dialogue. Great job!!” — Tarana Burke

"Igniting the conversation, taking a hard look, trying to heal up and love up and move forward is what this brilliant cover forces. No more time for silence or denial - real dialogue is critical to our survival. Bravo Ebony for throwing the shades open and forcing folk to deal. Job well done!” — Crystal Whaley

"This is the MOST conversation I've seen/heard in YEARS about Ebony; people are sharpening pitchforks/boycotting/unsubscribing AND lining up to buy this issue/sharing/subscribing. Sounds like Mission Accomplished.” — Kemba Niambi Miles

"I am proud of Ebony for tackling this issue we all need to pull back the veil of & reveal the issues in our community amongst us and this is one a revered public figure who fooled us all.” — Kea Letcher

“I canceled my subscription to "Ebony" years ago, but I am signing up again. This cover is nothing short of brilliant, bold, and very necessary. It is time that Black America moved on from its romanticized view of Bill Cosby and dealt with the harm that he has done. If he were so concerned about the legacy of the show and its impact on our community, HE would have been a better person. As it stands, the very ones who are defending him have yet to realize that he didn't care enough about YOU or the community to live up to the very standards he preached at us. Good job, Ebony!” — Alana Sims

"Like it or not, Black people should not turn a deaf ear to violence against women just because it might have been perpetuated by someone we love. With love comes correction, holding each other accountable. You cannot forgive what you refuse to acknowledge.” — Erica Nicole Richardson