Jake Tapper stuns Jeb Bush: If your brother is blameless for 9/11 why is Hillary Clinton responsible for Benghazi?

Jeb! stammers his way through a confused defense of W after the CNN host asks the most logical question ever 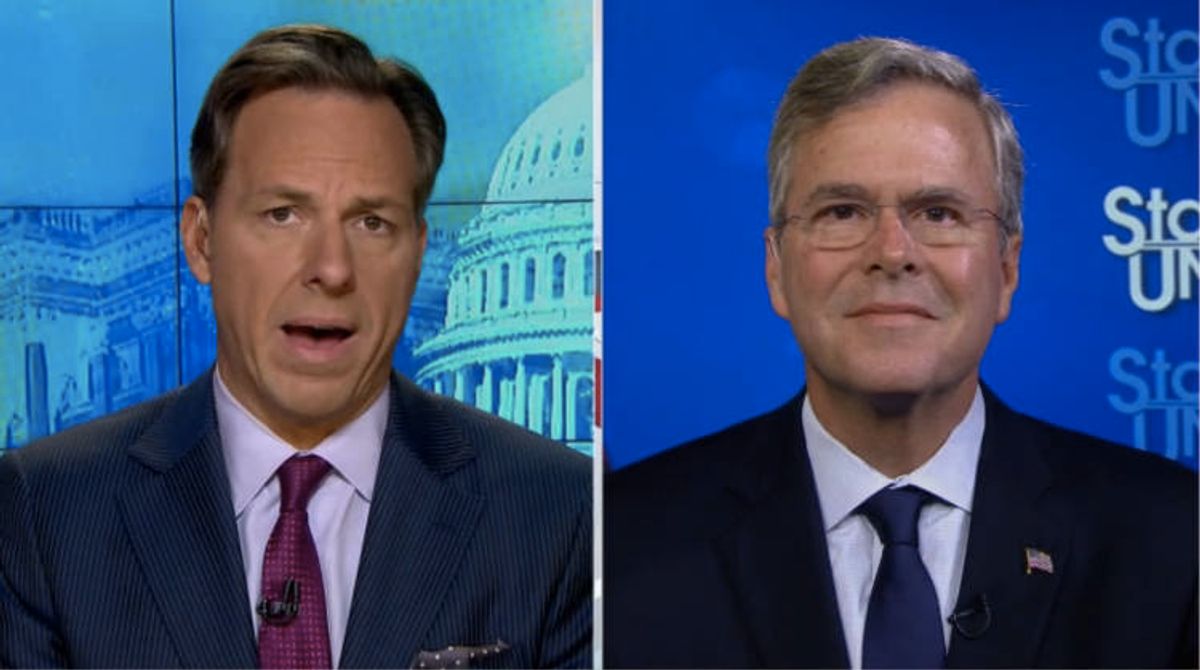 One of the most befuddling developments of the 2016 presidential race is the astonishing unpreparedness of erstwhile frontrunner Jeb Bush and his inability to answer questions he should have seen coming a mile away.

"Knowing what we know now, would have authorized the invasion [of Iraq]?" Fox News host Megyn Kelly asked Jeb last spring, to which he inexplicable answered yes, citing the faulty intelligence that his brother, George W. Bush, used to justify the 2003 invasion.

Now, in another rush to defend his big brother, Jeb has painted himself into another ridiculously indefensible position on Republican hypocrisy over the attacks on 9/11 and the attacks on a U.S. consulate in Benghazi.

“My brother responded to a crisis and united the country, he organized our country and he kept us safe,” Jeb told CNN's Jake Tapper on Sunday's edition of "State of the Union."

On Friday and over the weekend, Jeb's rival and current Republican frontrunner Donald Trump hammered George W. Bush over 9/11 in multiple interviews and on Twitter:

“I don’t know why he keeps bringing this up,” Jeb complained to Tapper, insisting that his brother had kept Americans safe despite the largest terror attack on U.S. soil happening during his tenure. “It’s what you do after that matters,” he argued.

“Does anybody actually blame my brother for the attacks on 9/11? If they do, they’re totally marginalized in our society. It’s what he did afterwards that mattered, and I’m proud of him. And so are a bunch of other people.”

Still, Tapper asked Jeb if his allegiance to his older brother “might be in some ways a political or policy liability blinding you to mistakes he made,” before hitting Jeb with a follow-up question so logical it stunned Jeb into a stammer:

TAPPER: Obviously Al Qaeda was responsible for the terrorist attack of 9/11, but how do you respond to critics who ask, if your brother and his administration bear no responsibility at all, how do you then make the jump that President Obama and Secretary Clinton are responsible for what happened at Benghazi?

JEB BUSH: Well I -- the question on Benghazi which, is hopefully we'll now finally get the truth to, is was the place secure? They had a responsibility, the Department of State, to have proper security. There were calls for security, it looks like they didn't get it. And how was the response in the aftermath of the attack, was there a chance that these four American lives could have been saved? That's what the investigation is about, it's not a political issue. It's not about the broad policy issue, is were we doing the job of protecting our embassies and our consulates and during the period, those hours after the attack started, could they have been saved?

TAPPER: Well that's, that's kind of proving the point of the critics I was just asking about, because you don't want to have your brother bear responsibility for 9/11 and I understand that argument and Al Qaeda's responsible, but why are the terrorists not the ones who are responsible for these attacks in Libya?

BUSH: They are, of course they are but -- of course they are, but if the ambassador was asking for additional security and didn't get it, that's a proper point and if it's proven that the security was adequate compared to other embassies, fine, we'll move on.