Jeb wants to hit Clinton on Benghazi, but won't admit 9/11 was a much bigger failure. His problems are mounting 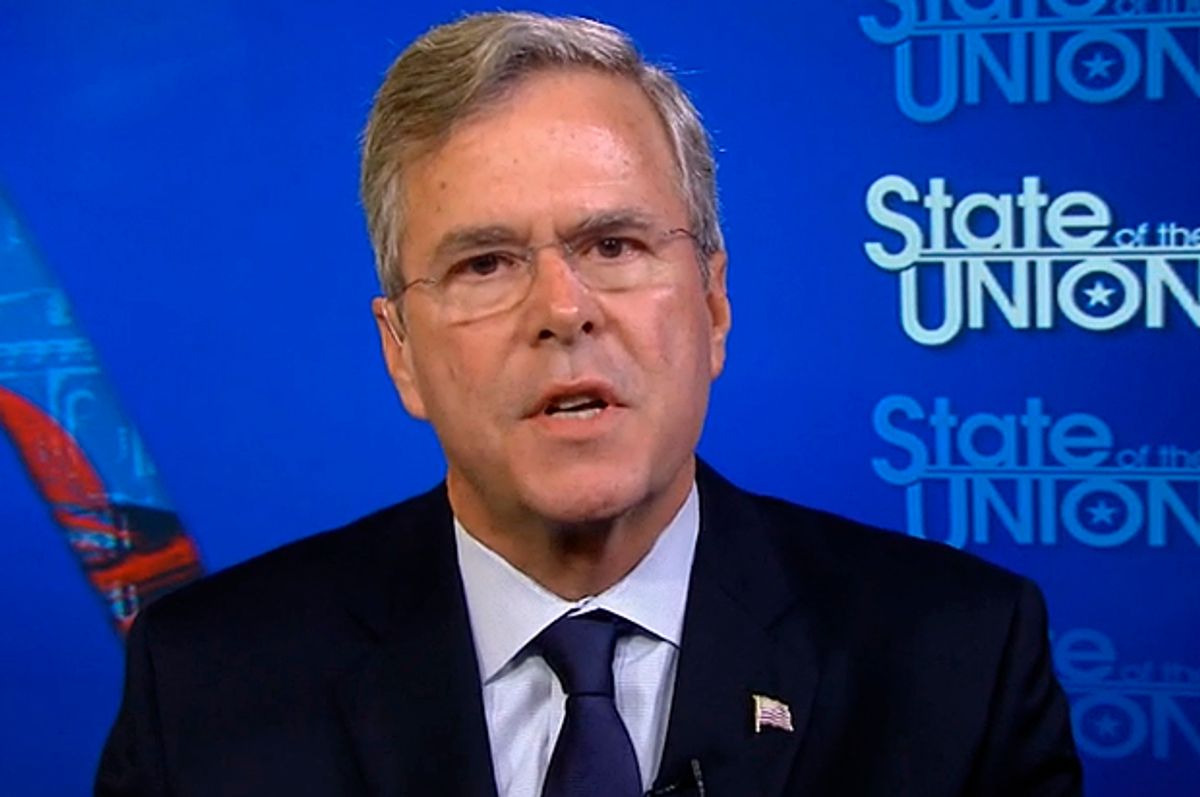 The common wisdom is that this is the season for Republican voters to express themselves by supporting silly candidates and that once the primary comes around, they'll crack and throw their support behind one of the more serious contenders, like Jeb Bush or Marco Rubio.

But when it comes to Bush, voters may be picking up on something that the party elite do not understand:Bush faces a brother-shaped albatross hanging around his neck that will, in fact, turn out to be a real problem in the general election.

Worse, Bush's way of handling the issue suggests he hasn't given it much thought, clearly expecting everyone to politely pretend that we'll all forgotten about that 9/11 and Iraq War thing.

Bush's weakness on this front was embarrassingly evident in a weekend interview on CNN with Jake Tapper, where he tried to blame Hillary Clinton for the four deaths in Benghazi because "had a responsibility at the Department of State to have proper security" but then denied that his brother had any responsibility for the 3,000 deaths on 9/11, because, "It's what he did afterwards that matters."

In other words, if you're a Democrat, you are obligated to prevent violence, but if you're a Republican, there is no obligation to maintain security so long as you wear flight suits after thousands of people die horrible deaths on your watch. Tapper pointed out that this is a double standard, but Bush's response seemed more petulant that somber in the face of so much tragedy.

What this interview showed is, especially if Bush is the nominee, the choice of the Republicans to make "Benghazi" a catchphrase during the 2016 campaign runs a strong chance of backfiring. You can guess at why Republicans thought it was just a peachy idea to hold a bunch of obviously politicized congressional hearings that were clearly never going to turn up diddly squat. They appear to still be caught up in the idea that Democrats are "soft" on national security, that Democrats are the Mommy Party: Good for nurturing you, but supposedly not good at handling outside threats. And Republicans clearly still think they can work that Daddy Party image, promising to deal with all the scary monsters so you can sleep soundly at night. The fact that Clinton is actually a woman probably only propelled this thinking, which is rooted deeply in sexism and rather childish notions that growling and acting tough is somehow the same thing as keeping us safe.

But the blunt fact of the matter is that Clinton was Secretary of State when Osama Bin Laden was killed, and George Bush was president when Osama Bin Laden killed 3,000 Americans. Is Jeb Bush betting that Clinton is somehow too good to run campaign ads contrasting the picture of her in the situation room while American troops killed Bin Laden with pictures of his brother reading My Pet Goat while 3,000 Americans lost their lives to Bin Laden? She might be. Outside groups that are supporting her might not be. Either way, that's not a bet I'd take, especially if Republicans keep flinging the word "Benghazi" around to express their belief that Democrats---and women---are incapable of keeping us safe.

Bush has clearly come up with his talking point to evade this issue, which he trotted out on CNN. "Does anybody actually blame my brother for the attacks on 9/11?" he asked, clearly hoping you'd think anyone who brings this up is basically a 9/11 Truther. The problem, for him, is there is a huge gulf between blaming George Bush for what happened and pointing out, accurately, that he didn't keep us safe. The problem is that Jeb Bush keeps conflating the two.

How pathetic for @realdonaldtrump to criticize the president for 9/11. We were attacked & my brother kept us safe.

This statement contradicts itself. We were, in fact, attacked, which is proof that George Bush didn't keep us safe. In order to argue that you kept someone safe, you have to prevent the attack. The safety was breached. There is no way around this.

It is also worth remembering that while the Benghazi hearings haven't produced anything but a couple of Republicans admitting that they are a partisan exercise using taxpayer money to campaign against Clinton, the congressional hearings investigating the Bush administration's failures in preventing 9/11 did produce a smoking gun, a memo titled "Bin Laden Determined To Strike in U.S." We also have Bush's reported response to being briefed by alarmed security officials about this threat: "All right. You've covered your ass, now," before basically blowing it off.

By reasonable standards, none of this means Bush is to blame for 9/11. However, if you hold him to the standards that Clinton is being held to by Republicans regarding Benghazi---that if it happened on your watch, you are to blame---then, well, there's more evidence of his neglectfulness than of hers, for sure.

Bush's answer to this problem, to try to make 9/11 about the aftermath, isn't going to help him much. That's because the aftermath was the failed Iraq War, which had nothing to do with 9/11. Imagine what Clinton could do with that. If Bush runs, expect her to repeatedly remind people that George Bush was too busy starting irrelevant wars to deal with Bin Laden, but that the Obama administration, with her as Secretary of State, actually got the guy who did this.

If Republicans are smart, they'll just avoid the whole thing and nominate Rubio instead. Sure, he looks like a deer caught in headlights and his frat boy smirk will look especially unserious compared to Clinton's impressive resume. But at least he doesn't carry George W. Bush, 9/11 and the failed Iraq War everywhere he goes.