Some PC opponents have good intentions. Trouble is, they have the most nauseating, vitriolic allies in politics 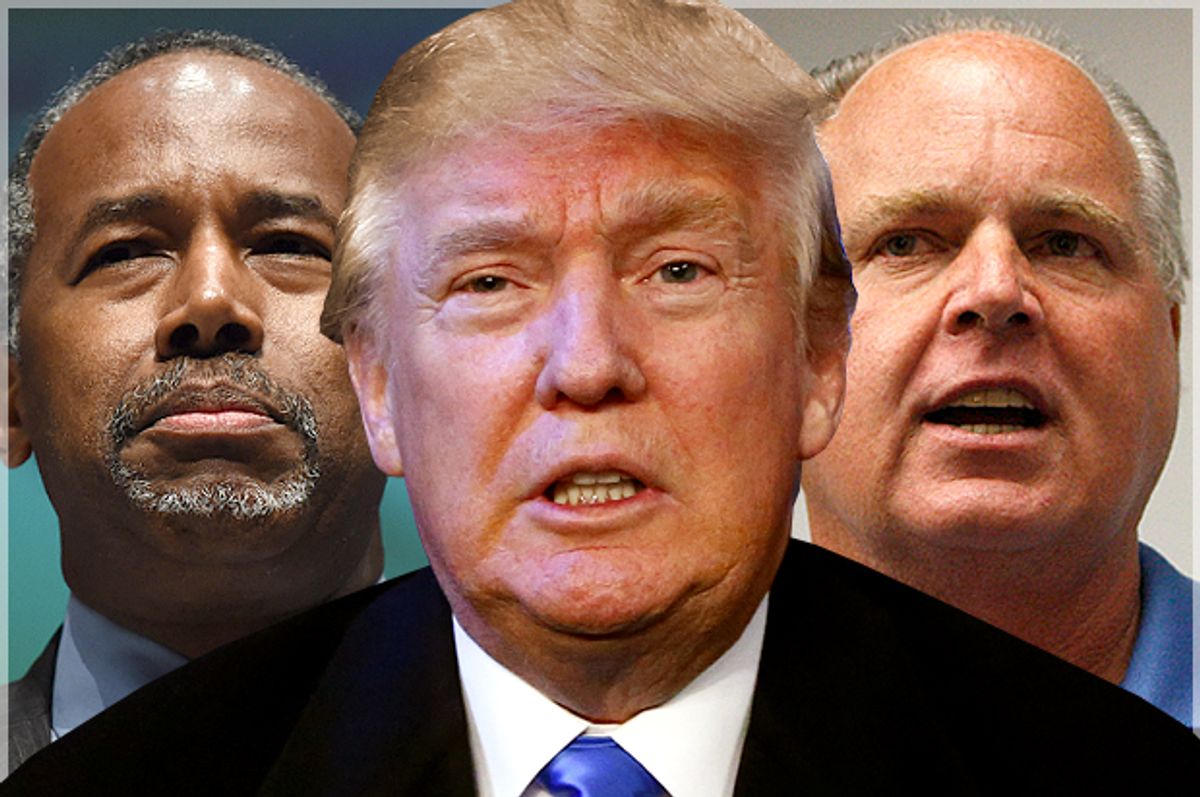 Some of those waging war against college-campus political correctness have good intentions and productive things to say; the trouble is that they also attract ideological bedfellows who fuel some of the nastiest vitriol in U.S. politics. Apart from those with genuine interest in the mental and intellectual well-being of college students, a good chunk of the culture-wars front of the anti-P.C. campaign belongs to an unsavory mélange of white supremacists who fear a minority majority and a multiculturalist “agenda,” and “pick-up artists” and “men’s rights activists” who view educators with ordinary human sensitivities as “cucks” and “wimps.”

This theater of the anti-P.C. crusade doesn’t make it into the New York Times, but it rages on social media and online message boards parallel to the sanitized forms it takes when uttered by Donald Trump or President Obama. Thus, the anti-P.C. position manifests in two very different ways and in two very different segments of U.S. political culture: it’s respectable politics, even politically correct to be against political correctness; but it’s also a signal to bigots and misogynists that the real problem all along has been man-hating “feminazis” and white-hating people of color and heterophobic gays and their wussy (“wussy” is a euphemism) liberal enablers. This is why it’s so crucial for the serious critics of campus political correctness not to oversell their positions by portraying a world in which society’s least powerful are suddenly the oppressor class. It’s sensible to critique the excesses of political correctness, but dangerous to feed anger with distortion.

The reality remains that censure and censorship are still primarily the tools of the powerful, not the marginalized, and not exclusively the “SJWs” of the left. Recent events in the P.C. culture wars reflect as much. In Philadelphia, for example, an adjunct professor was suspended by her college for participating in a protest against police with other #blacklivesmatter activists. At Duke University, a Christian student refused to read a too-graphic graphic novel assigned in class because he believes viewing explicit sexual images is immoral.

And at Wesleyan University, where left-leaning student activists did attempt to defund the college newspaper because they found its coverage of the #blacklivesmatter movement insensitive, the University administration and the newspaper editorial staff affirmed the importance of free speech and ruled against the demands of the protesters even as they acknowledged the importance of the protesters’ concerns. Indeed, the conduct of the Wesleyan administration and the newspaper editorial staff in responding to the protesters is an outstanding model for how to be sensitive and amicable while ultimately upholding free speech.

Of each of these three examples, the only protester who got his way was a Christian—not an “SJW”—who expressed a rationale for skipping course content. In the two remaining examples, the #blacklivesmatter activists find themselves on the losing side of institutional power (while I oppose the outcome in Philadelphia, I applaud the outcome at Wesleyan). These events show us that political correctness is not this uncomplicated leftist force that’s ruining U.S. colleges and universities and turning students (and the wider nation) into wimps. Yet, while the mainstream of the P.C. movement now has the chance to come gently to terms with all the ways reality complicates the narrative of coddled students and SJW takeover, the dark side of that movement is uncritically embracing that narrative. Too often the argument against political correctness amounts to little more than chest-puffing insinuations that educators and students and liberal advocates are a bunch of wussies (again, the euphemism).

For example, the first time I wrote about trigger warnings, one anonymous Twitterer boasted “if [Aaron] were my professor, he’d quit after having me in class” (my students at Colby and Georgetown are insanely smart, challenging, and politically diverse, probably more of all of those things than you, anon.). Another courageously anonymous avatar claimed I “wouldn’t last very long in reality” (if not a threat, an interesting ontological proposition). A man opposed me to soldiers, claiming that soldiers “aren’t too much of losers and wimps to put their lives on the line to protect [my] fat, ugly ass” (for the record, I’m a decade removed from a Division I track career and maintain 4% body fat, though I don’t see my rear end enough to speak confidently of its aesthetics). A conservative pundit offered “if you need a trigger warning, you are weak and worthy only of pity, but more likely contempt” (I struck a chord with military personnel who apparently don’t know that the concept of “triggering” comes from treating war veterans with post-traumatic stress disorder).

I cite these examples because they provide a sense of the more visceral attitudes that underlie the occasionally measured case against trigger warnings or safe spaces or qualitative (de facto) limitations on inflammatory speech. This explains a good bit of why the underbelly of conservative politics aligns so seamlessly with fringe discourse communities like “pick-up artists” (who appreciate the bombast of candidate Donald Trump), “men’s rights activists,” and white supremacists. The margins of the U.S. right are built on a mix of ambiguously directed anger and outright cowardice, a desire to pick on society’s least powerful (students, immigrants, persons of color) and justify that desire by telling themselves it’s about freedom.

In this way, “political correctness” as a metonym for wussy, minority-loving liberal cucks is the perfect metonym for this emergent attitude of conservatism, an attitude of anger toward immigrants, women, the poor, and the otherwise marginalized that even RNC chairman Reince Priebus acknowledges is destroying the party. The angry privileged of America see in political correctness an opportunity to cast themselves as America’s real victims. Fear of unreasonable women and minorities taking over the college campus mirrors the fear that the historically marginalized might someday have real institutional power beyond the campus: fear of a government comprised mostly of them, an administration comprised mostly of them, an economy in which they hold the most influential positions, a criminal justice system in which they are the judges, lawyers, police, and guards, and not the vast majority of the inmates. Even the “language police” metaphor is telling, because, of course, it’s a metaphor: language policing and tone policing are forms of judgment, but it takes real police to get beaten or shot when a figure of authority doesn’t like your tone.

For these reasons we need to be careful about how much power we attribute to political correctness. To put it simply, metaphors of authoritarianism are unhelpful when we have real instances of authoritarianism (policing in predominately black communities, zealous incarceration, persecution of whistleblowers). The “chilling” and “Orwellian” effects of political correctness on free speech in certain communities—like colleges—would only be “chilling” and “Orwellian” if a coercive apparatus (as in 1984) actually adjudicated on speech in the ways that anti-P.C. warriors so often claim.

The reality is that, despite the kinds of student protests and demands that have always rattled college campuses, colleges and universities are actually standing up for free speech. And when they’re not, it’s not just to placate leftists; it’s to make accommodations for a student’s Christian beliefs (perhaps a reasonable accommodation), or to remove minority and adjunct faculty on the left for stepping out of line. The real agenda of the anti-P.C. warrior isn’t to protect free speech; it’s to maintain the oppressive power structures that social justice activists have been speaking out against.