George W. Bush's big gift to Ted Cruz: A slap from the establishment's village idiot is just what the 2016 hopeful wants

George W. Bush tells donors that he dislikes Ted Cruz, which is precisely what Cruz wants his supporters to hear 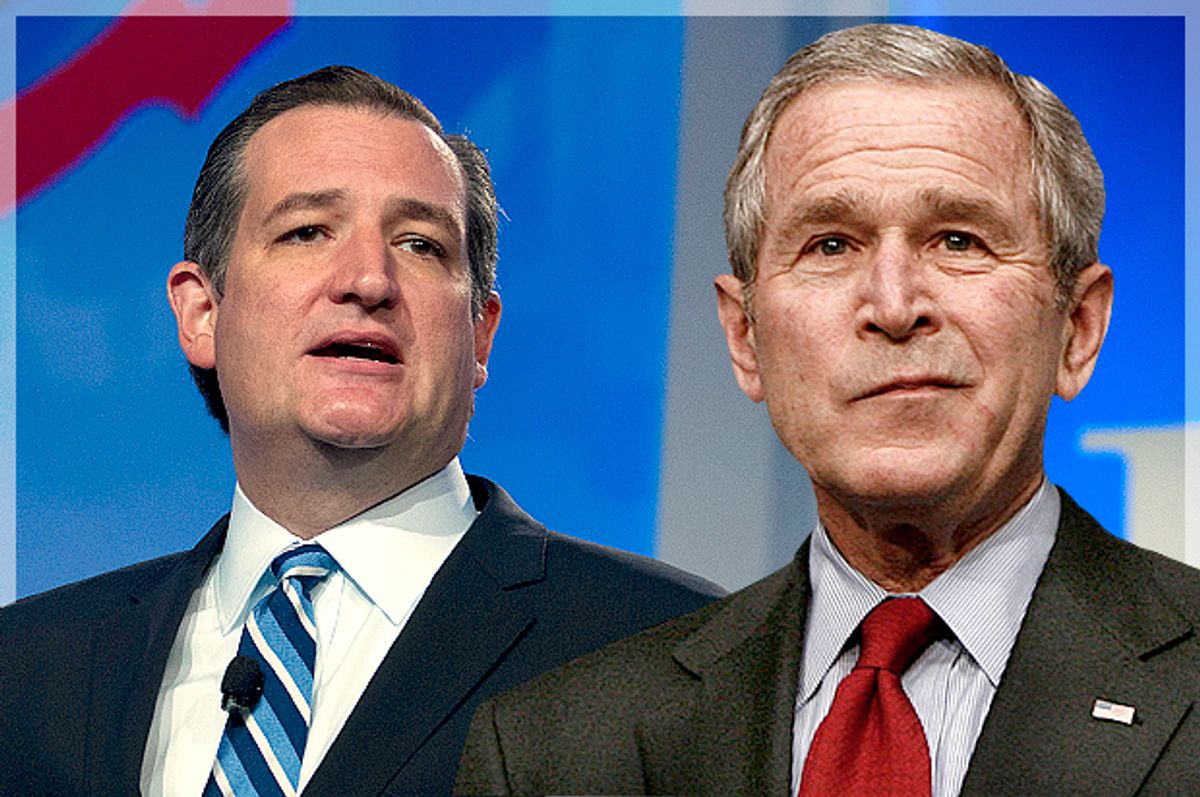 Ted Cruz wants you to vote for him for president based largely on his roster of enemies. He hasn’t really accomplished a whole lot in his less-than-half a term in the Senate, but he has built out an impressively large and bipartisan coalition of haters who view him as a preening lout who sabotages the legislative process for his own political gain. Cruz’s strategy is simple: confront his Republican and Democratic colleagues with wildly unrealistic legislative demands that are guaranteed to fail, blame everyone in Washington but himself for their inevitable failure, and then make the case to conservatives that the “Washington cartel” has once again forsaken them. It’s a fantastically cynical strategy that leverages the scorn of the establishment to his own benefit.

And if you’re actively courting the hatred of the political elite, you couldn’t ask for a better gift than the one Cruz received over the weekend:

“I just don’t like the guy,” [George W.] Bush said Sunday night, according to conversations with more than half a dozen donors who attended the event.

One donor in the room said the former president had been offering mostly anodyne accounts of how the Bush family network views the current campaign and charming off-the-cuff jokes, until he launched into Cruz.

“I was like, ‘Holy shit, did he just say that?’” the donor said. “I remember looking around and seeing that other people were also looking around surprised.”

Holy shit indeed. There’s a bit of a troubled history between George W. Bush and Ted Cruz. Cruz worked as a policy advisor on Bush’s 2000 campaign and as part of the Florida recount team, and he fully expected to have a top-level job in the Bush administration. It didn’t work out:

But Cruz’s personal style earned him many detractors in BushWorld. He was infamous for firing off mundane work e-mails in the middle of the night—it happened so often that some in the Bush campaign suspected him of writing them ahead of time and programming his computer to send while he was asleep. He was also known for dispatching regular updates on his accomplishments that one recipient likened to "the cards people send about their families at Christmas, except Ted’s were only about him and were more frequent." When it came time to divvy up the spoils of victory, many of Cruz’s campaign colleagues headed to the White House; Cruz went to Washington, too—but he was exiled to the outer Siberia of the Federal Trade Commission. Says one friend: "He was pretty crushed."

It’s a bit amusing that a man who was once so thirsty to become a high-ranking member of the establishment is now on a personal, principled quest to tear down the “Washington cartel.” But that’s where Cruz finds himself, and a caustic slap from the former Republican president who spurned him – and who happens to be the brother of the Republican establishment’s preferred 2016 candidate – is precisely the sort of anti-endorsement Cruz is clamoring for.

George W. Bush’s hapless brother, Jeb(!), is at this moment muddling through the 2016 primary, his polling numbers stubbornly low and his fundraising clout severely diminished. And yet, he remains the favorite pick of the Republican establishment – Jeb’s political viability rests on his ability to keep squeezing money out of his family’s network of donors. He’s an ideal Ted Cruz villain, and the fact that W. is taking potshots at him in front of a room full of Republican donors works perfectly for Cruz as it makes it look like he’s a real threat to Jeb’s candidacy specifically and the Republican establishment generally. It also provided Cruz an opportunity to come off as the bigger man – a position Cruz rarely gets to take. “I have great respect for George W Bush, and was proud to work on his 2000 campaign and in his administration,” Cruz said by way of response. “It's no surprise that President Bush is supporting his brother and attacking the candidates he believes pose a threat to his campaign.”

On a broader level, it’s amazing that Republican politics have become so bitter and divisive that the scorn of the Bush family can be seen as an asset for aspiring GOP president. But for Cruz it’s a point of pride and proof to his supporters that he’s getting results.