Republicans blasted Romney for blaming his loss on Obama's "gifts," but they've since embraced Mitt's thinking 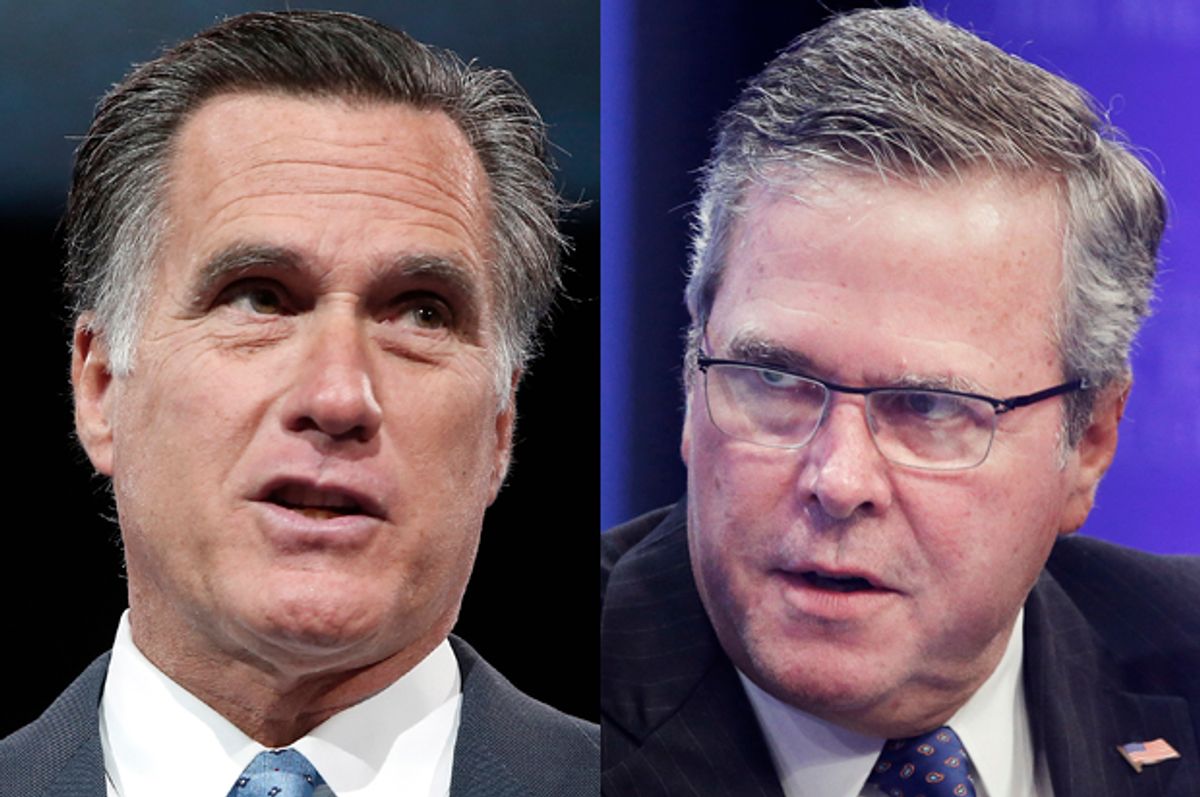 There’s a curious proliferation of “free stuff”-ism among the 2016 Republican presidential candidates. Jeb Bush got the party started late last month when he went down to South Carolina and explained that Republicans would do a better job winning over minority voters this cycle because “our message is one of hope and aspiration” whereas the Democrats’ message is “one of division and get in line and we’ll take care of you with free stuff.” He was joined a couple of weeks later by Marco Rubio, who characterized the first Democratic primary debate of the 2016 cycle was “basically a liberal verses liberal debate about who was going to give away the most free stuff: Free college education, free college education for people illegally in this country, free health care, free everything.” They were joined a few days later by Chris Christie, who said “there is going to be more free stuff for more people than you can even imagine” should any of the Democratic candidates win.

This same argument also proved extremely popular with the sweaty loud-talkers who populate the AM radio dial. “Bernie Sanders, Hillary, Lincoln Chafee, and they're all talking about all the free stuff,” Rush Limbaugh belched into his microphone. “The race last night was to see who’s going to give away the most free stuff,” said Sean Hannity. There was near-universal agreement across all segments of conservative media that the Democratic mantra was to provide things [gasp] at no cost [spit water] to constituents.

Free stuff! It’s a wee bit puzzling to see the leading voices of conservative and Republican politics so enthusiastically embrace the “free stuff” rhetoric. Well, I should clarify – it makes sense that they’d embrace it because modern conservatism treats the poor and less fortunate as lazy and/or parasitic entities who have been lulled to complacency by overly generous government payouts and thus refuse to find real work. What’s puzzling about it is the fact that not too long ago Republicans realized the politically radioactive nature of this kind of talk.

After Mitt Romney lost the 2012 election on the steam of his “47 percent” gaffe, he proved himself a very bad loser by saying that Barack Obama won by promising “gifts” to minority groups and young people. “In each case, they were very generous in what they gave to those groups,” Romney said. The backlash from within the party was swift and harsh. Daily Caller writer Matt Lewis called Mitt’s comments “poison for the GOP.” Republican operatives, spooked by Romney’s abysmal performance among the same voter demographics he’d identified as having been bought off by Obama, urged him to shut up and retire to private life as quickly as could be arranged. The harshest blowback came from Bobby Jindal, who called Romney’s remarks “absolutely wrong,” rejected them “absolutely,” and said: “I don’t think that represents where we are as a party and where we’re going as a party. And that has got to be one of the most fundamental takeaways from this election.”

The political logic behind the Romney backlash is as sound today as it was back then – the “free stuff” line of argumentation presumes that a certain segment of the electorate are just moochers looking to score a free ride on the backs of hardworking taxpayers. And as Bloomberg’s Sahil Kapur writes, there are some voices in the GOP today counseling candidates to stay the hell away from the Romneyesque rhetoric about “free stuff” because it “comes off as condescending to voters who are struggling economically and need help.”

Another problem with going down the “free stuff” route that is grossly hypocritical. Jeb’s condemnation of “free stuff” and other forms of government largesse is undermined by the fact that he’s proposed using the tax code to shower the wealthiest Americans with billions in tax breaks. Rubio dislikes “free stuff” but also wants to zero out the tax rates on capital gains and estates, which is a tremendous benefit for rich people. Their complaint isn’t really that stuff is being given out for free, it’s that the “free stuff” the Democrats want isn’t going to the constituencies they favor. And while they complain about the costs of providing subsidized healthcare or college tuitions, they’re either nonchalant about the astronomical price tags associated with massively regressive tax cuts, or they do some impossible mathematical contortions to claim they’ll pay for themselves and leave room enough to lard out the military budget (soldiers vote too).

Either way, it’s clear that the GOP’s post-2012 rejection of Romney’s divisive and insulting “gifts” nonsense was nothing more than a blip – a post-defeat expression of panic over demographic decline that the party has since thought better of. They’re back to bashing “free stuff” and writing off large segments of the voting public as incorrigible mooches.