Conservatives are throwing a fit because Captain America opposes nationalism. Which is what he's always done. 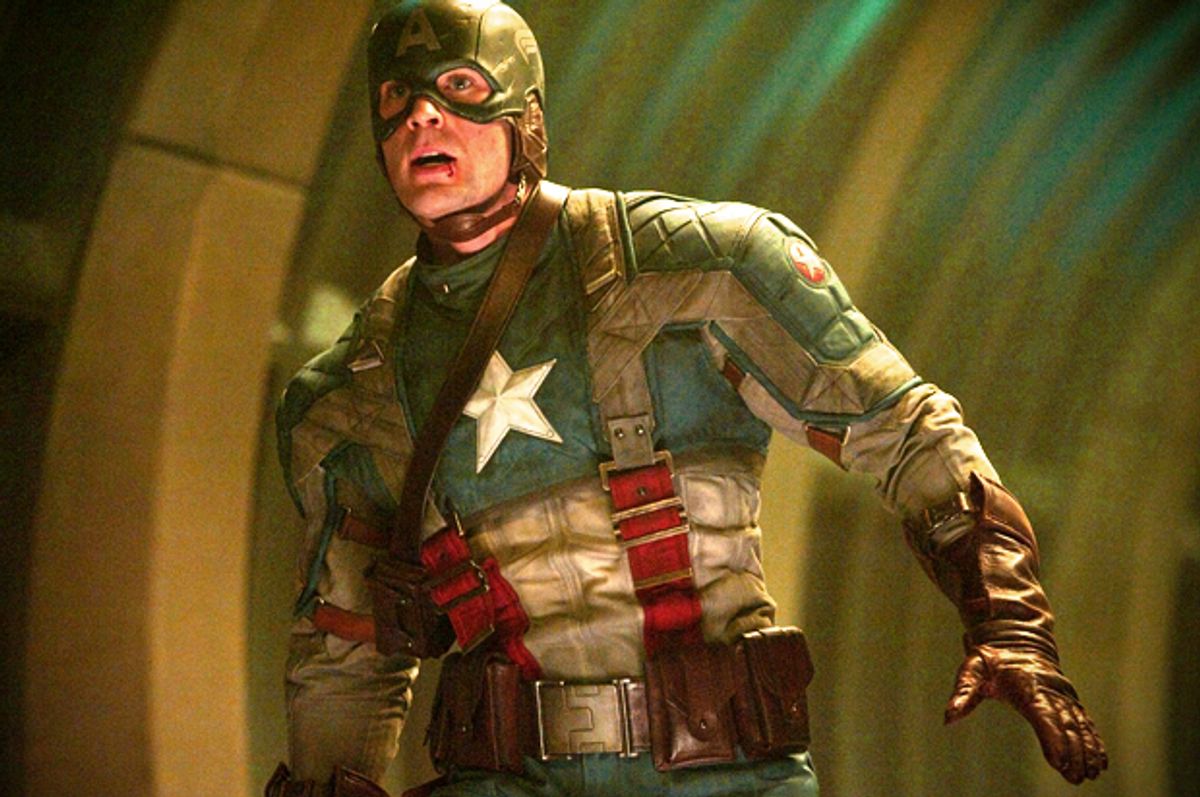 There's no surer evidence that conservative media coasts on exploiting the ignorance of its audience (and in many cases, the willful ignorance of its pundits) than the hissyfit being thrown over the first issue of a new run of Captain America comics.

In the issue, Sam Wilson, a character who used to be called Falcon and who took over the mantle of Captain America after Steve Rogers became too old to handle the duty any longer, has been on the outs from various intelligence agencies, which he believes have grown corrupt from what is essentially a comic version of the "war on terror". He also helps out undocumented immigrants that are being plagued by white supremacists. Oh yeah, and he's black, something white conservatives know better than to be openly angry about but Allen West will go ahead and get angry over for them.

Breitbart, Daily Caller, and Fox News all threw utterly fact-free temper tantrums over this new development, whining that Captain America's progressivism is somehow new and different and that his stance against racist conservatives is somehow a new development for the character. "Instead of going against Hydra and the typical Captain America villains," supposed comics expert Clayton Morris said (after incorrectly claiming comic sales are down when, in fact, they are rising), "he's going up against conservatives! That's his new enemy!"

What is bizarre about this rant is that it depends on an audience who not only hasn't ever read the Captain America comic, but has never seen either of the blockbuster pictures starring Chris Evans. If you had, you would remember that Hydra, the fictional enemy of the Captain, was started by Nazis to spread the joys of fascism around the world. In other words, Captain America's enemies have always been nationalists intent on stomping out anyone they see as untermensch.

It's logical that his 21st century foes would be a murderous cult that threatens the lives of undocumented immigrants they see as contaminants. It's also more than a little weird to see all these outlets describe the bad guys in this comic as mere conservatives. If you find yourself relating to a group of murderers who threaten anyone who crosses the border with death, you've crossed the line from "conservative" into something far more frightening.

More than that, it's just exploiting audience ignorance to argue that Captain America's progressivism is "new" or a "change". Again, if you've seen the movies, you can see the flaw in that. The first movie is an allegory about how strength is useless without the liberal value of protecting the vulnerable behind it. The second movie is overtly political, a story that openly suggests that the "war on terror" is becoming indistinguishable from fascism.

The Steve Rogers from the movies is unmistakably liberal: Anti-racist, a lover of independent women, and a man who believes that the best patriot is one who questions his government instead of blindly follows orders. This characterization is consistent with the canonical Steve Rogers of the comic books, who has long been an icon of progressive patriotism, a believer that fighting for America should only be done if America defends its own liberal values.

Cultural critic Steven Attewell wrote the classic essay laying out the argument for Captain America's liberalism at the blog Lawyers, Guns and Money in 2013. Even Steve Rogers's biography is one that would signal, to the 60s audience that the character was revived by Marvel to first reach, a sense of progressivism: He was an art student living in Brooklyn during WWII, at the time when progressivism ruled city politics. Attewell writes:

To be an artist in New York City in the 1930s was to be surrounded by the “Cultural Front.” We’re talking the WPA Arts and Theater Projects, Diego Rivera painting socialist murals in Rockefeller Center, Orson Welles turning Julius Caesar into an anti-fascist play and running an all-black Macbeth and “The Cradle Will Rock,” Paul Robeson was a major star, and so on. You couldn’t really be an artist and have escaped left-wing politics. And if a poor kid like Steve Rogers was going to college as a fine arts student, odds are very good that he was going to the City College of New York at a time when an 80% Jewish student body is organizing student trade unions, anti-fascist rallies, and the “New York Intellectuals” were busily debating Trotskyism vs. Stalinism vs. Norman Thomas Socialism vs. the New Deal in the dining halls and study carrels.

And then Rogers becomes an anti-fascist fighter who leads up a multi-racial squad of freedom fighters called the Howling Commandos. None of this is particularly subtle, unless you're so daft that you think that conservatives somehow "own" patriotism.

To be fair, there have been a couple of times in the history of the character where he took a turn to the right. In the 1950s, for instance, he became an anti-communist warrior. But this was so incongruous with the progressive bent that most Marvel writers wanted for the character that it was retconned. If you read Captain America now, you'll find that the story is that the real Steve Rogers was frozen on ice in the 40s and that the government found a doppleganger that they passed off as Captain America to trick Americans into supporting the Cold War. And there was a run, as Attewell points out, written by Mark Millar, where Captain America is "an unthinking nationalist" who bashes the French for supposedly being cowardly.

But the reactionary version of Steve Rogers was written in an alternate timeline. In the main Captain America timeline, there's a poignant passage where Rogers describes his admiration for the French and how he fought with brave French resistance fighters. "That's why it really galls me when I hear my own people dismissing the French as cowards," he ruminates, in an obvious bird thrown to all the conservatives who bashed the French for refusing to join with George W. Bush's adventure war in Iraq.

The fact that so many conservative outlets assumed, without even pausing to check their facts, that Captain America was a conservative character tells you nothing about the actual character, but everything about how conservatives mindlessly equate patriotism with reactionary politics. But, in reality, Captain America, particularly in his best stories, is an exploration of how patriotism is not the same thing as nationalism. Some of the best Captain America stories explore the dangers of nationalism, how it leads to paranoia and racism and war and the loss of basic freedoms. This latest story, where the new Captain America makes a stand against white supremacy and argues for the humanity of undocumented immigrants, is just following the long-established spirit of Captain America.