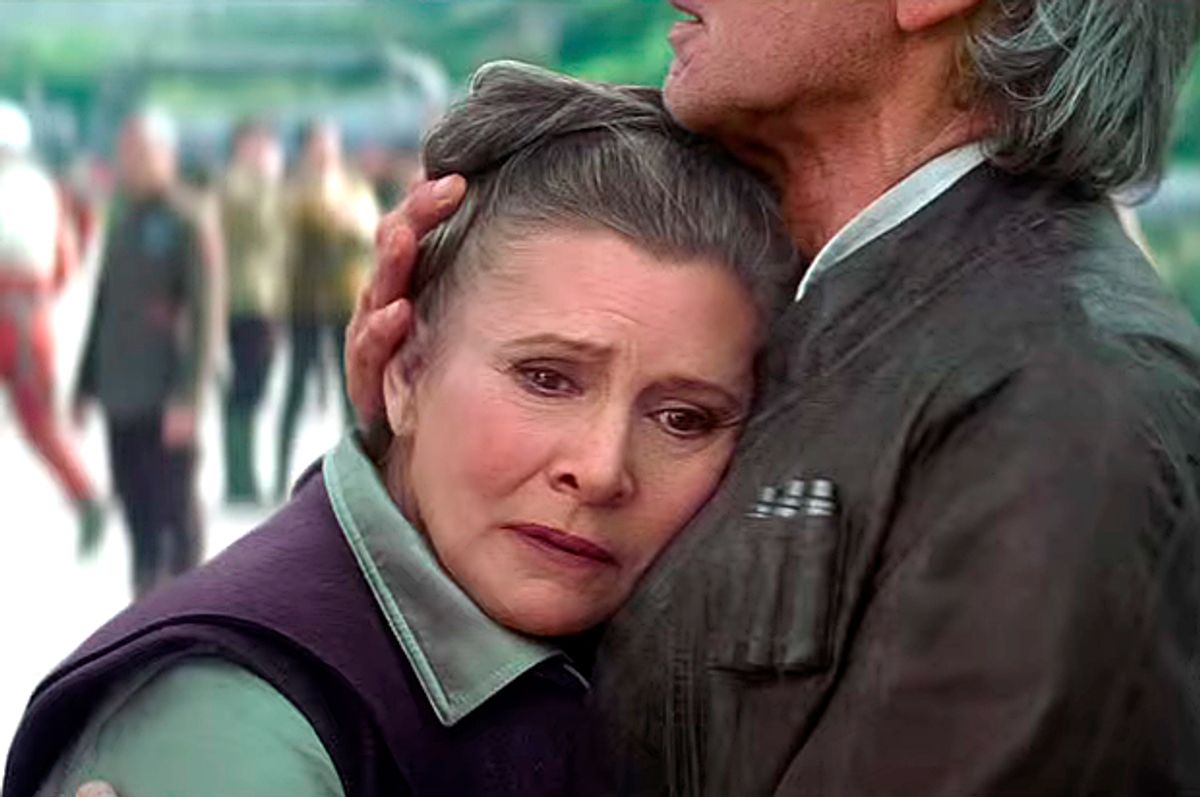 The most breathtaking moment in the new trailer for "Star Wars: The Force Awakens" trailer doesn't involve explosions or lightsabers or ominous references to the Dark Side. It's an eyeblink-long shot of Princess Leia herself, Carrie Fisher, in the embrace of Harrison Ford's Han Solo. It's a moment of a weary-looking woman with graying hair and lines on her face. Holy science fiction, Hollywood — somewhere, in a galaxy far, far away, a grown woman has been given permission to look like a grown woman. I want to go to that planet!

Fisher, who turns 59 this week, has for years been a sardonic and brutally honest chronicler of her own struggles with addiction, bipolar disorder (including a hospitalization just two years ago), and weight — all while working in an industry that isn't known for being easy on even seemingly perfect women. A few years ago, when the vicious cracks about Fisher resembling Jabba the Hut (actual sexist BS trolling entertainment story) were hitting peak cruelty, she became a spokesperson for Jenny Craig.

But even as she dropped fifty pounds — and seemed to hint at some other changes when she said of her fellow "Star Wars" cast members that "We all look a little melted. It's good to see other melted people" — she's maintained her sense of humor and realism. As she observed a few years ago, "I swear when I was shooting those films I never realized I was signing an invisible contract to stay looking the exact same way for the rest of my existence."

In an April interview, she reiterated the sentiment, saying of her early sex symbol image, "I didn't like that, because you have to live up to something there." And in an interview with Palm Beach Illustrated, she jokingly replied to a question of what Leia would be like now by tartly saying, "Elderly. She’s in an intergalactic old folks’ home. I just think she would be just like she was before, only slower and less inclined to be up for the big battle."

Of course, this is still the entertainment industry -- the one in which Anne Hathaway is already losing roles to younger women -- and it comes with its inherent inevitable pressures. Speaking about the new "Star Wars," Fisher's mother, Debbie Reynolds, confessed to reporters last year that her daughter had "worked her body off for one year to not have a body," and Fisher confirmed, "They didn't hire me, they hired me minus 35 pounds." And when a colleague remarked this week how wonderful it was to see the new trailer showing the actress with her costar as "an age-appropriate-looking couple," I couldn't help recalling that Harrison Ford is fifteen years older than Fisher.

But in a business — and God knows, in particular a genre — in which women are all but invisible and women who are over thirty are practically unheard of, the sight of an older, softer Leia is cause for cheering. Gone are the cinnamon buns over her ears. Gone is the gold bikini. And yet she's still here, still a character worth rooting for. Who needs special effects when you've got her? Last year, Fisher joked of her younger costars, "The new actors are great. I go: 'Just you wait till you get a fanbase that's going to follow you around for forty years.'" But she added, "I am Leia and Leia is me."

Leia, just like the woman who plays her, is indeed now forty years older. That she endures is a triumph of survival, in Hollywood as it is in space, and it's proof that both Carrie Fisher and Princess Leia are forces to be reckoned with.